A large dog-like creature had been sniffing around our camp while we slept. The road hadn't been kind to us and our food supplies were running low. Truth be told, my own altruistic streak was responsible for most of our problems; we'd picked up stragglers and waifs wherever we found them, and had far too many mouths to feed.

But this dog-thing was not joining us, it was trying to steal from us. One of my medics reckoned he knew how to deal with it, no confrontation necessary. To my surprise, he got a group together and simply dragged its bulk away from the camp, and then tipped it into a ravine.

As far as I can tell, it remained passive right up until the moment it hit the floor. Nowhere Prophet is a beautiful game set in a strange and ugly world.

It's not our world, though much of it is recognisable. Your convoy is made up of people who look human, and their job titles might be familiar. Over there is a scout, that lady is a warrior monk and here are a couple of raiders and hermits. Oh, and that guy with the mask and the gold hanging from his ears? He's a Shifty Opportunist.

Not a conventional job title, Shifty Opportunist, I'll grant you that but it takes all sorts in this world gone bad. He's a useful chap to have around. In combat, he'll benefit from the misfortune of his allies, boosting his own stats every time one of his companions falls. I assume he's scavenging armour and weapons from them as they bleed out and, yeah, maybe that's not very noble, but it makes him pretty formidable when our backs are against the wall.

Forget the opportunist for now though. Ignore his shifty ways. Nowhere Prophet is not, on the whole, a game about taking advantage of others. It's a game about protecting your people as you try to lead them to safety.

In that sense, it reminds me of The Banner Saga, although it has card battles instead of isometric tactical encounters. But the distinction isn't that simple because Nowhere Prophet's cards are people. Or at least some of them are.

Every person in your convoy has a card associated with them. They're not just a name, an icon on the screen and a mouth to feed, they're also the forces you draw from your deck and play from your hand during combat. That Shifty Opportunist? He joined us after a random encounter in which I saved his skin.

There are other cards as well, attached to your own player character, the leader of the convoy. Broadly speaking, these are divided into equipment and orders. You might be able to snipe at an enemy card, doing a set amount of damage that either takes it out of the fight for good, or wounds it allowing your own squad to take it out. And all of this is happening on an actual map of sorts.

In truth, those maps are just a couple of columns where you can place cards, but there are obstacles scattered around that your units can use for cover, and it's a much more vivid depiction of small-scale skirmishing than I expect from a card game. The interface is clean and efficient, and there's a tactile pleasure in unleashing attacks and dropping cards into combat.

One of the strengths of Nowhere Prophet, informing the combat as well as the rest, is the writing. There's so much flavour it could be your new favourite cuisine.

What could have been a standard post-disaster blend of Mad Max, Fallout and more Mad Max turns out to be a weird blend of spiritual crises and technology infused with a madness that might be divine or might be infernal. It's strange and the strangeness is attractive, informing the gorgeous art as well as the words. 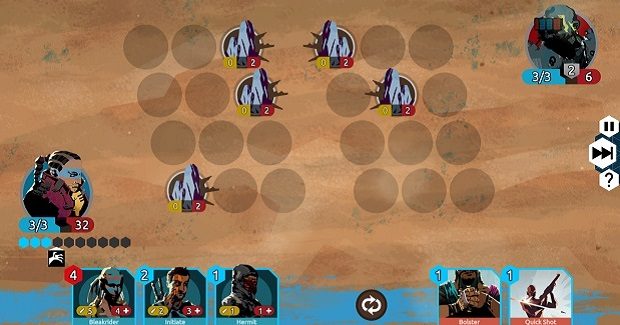 The overworld reminds me of FTL. It's a randomised path of nodes, each representing an encounter and sometimes with clues as to what that encounter might involve. Paths branch and criss-cross, and the further you move from the central route, the more likely you are to stumble across rewarding but difficult encounters. Many of these are mini text adventures with just two or three choices that can lead to rewards, punishments or combat scenarios. Others are settlements with markets, or meetings with teachers, trainers and sages.

As you travel, you need to manage a few resources. Batteries are your currency, food is the fuel that keeps your people moving, and then there are traits such as altruism, measured in numbers.

I think a lot about my altruism rating.

Remember when I said that Nowhere Prophet isn't a game about taking advantage of others? There's a possibility I've been playing it all wrong.

It's certainly reasonable to play as a benevolent leader, avoiding conflict where possible but throwing down the gauntlet whenever you encounter raiders or beasts taking advantage of those weaker than themselves. That's how I play and it feels right. But it isn't. Not really, because all of my people die before I can get them to safety. I fail them by trying to help everybody else.

Perhaps I need to start thinking more like the Shifty Opportunist, increasing the long-term chances of survival by capitalising on the failures of others. That's a possibility too.

It's still in early access, sold through itch.io and coming to Steam later this year, but even though I've played for many hours, I've only scratched the surface. There are more than a hundred cards still to discover and I've not even started to dig through some of the more wicked options.

I was sure Slay The Spire would be my favourite card game of 2018 but Nowhere Prophet is a definite contender. The great thing is, they're both taking some of the repetition and randomisation of roguelikes, and combining that with deck-building and roleplaying in completely different ways. There's not just room for both; they both feel essential already.

You can find out more on the official site, or buy into early access through itch.io.