As muscular as the Nvidia GeForce GTX 1080 is, there have been some not-entirely-unwarranted grumbles about its underlying tech; specifically, that it’s basically a GeForce GTX 1070 with more of the GPU’s cores enabled. The GTX 1080Ti is much bigger break from the rest of Nvidia’s 10-series, and a much more overtly 'high-end' card. It uses the bigger, beefier GP-102 GPU, same as in the bonkers-expensive Titan X and Titan Xp, and wields 3584 processing cores to the GTX 1080’s 2560. Its 11GB of memory is the most you’ll find in a mainstream card, too.

Obviously, these upgrades will put a proportionally larger dent into your finances (which is part of the reason why it doesn't currently occupy top spot in our best graphics card list as our 4K card of choice). The MSI GeForce GTX 1080Ti Gaming X Trio I’ve been testing – with its factory overclocking and custom triple-fan cooler – is a staggering £900 right now, and generally the cheapest GTX 1080Ti I can find that's actually in stock still asks for £850. With the GTX 1080 currently hovering around £650, this card needs to prove it’s not just a list of fancy-sounding specs.

In Doom, at least, it’s definitely overkill as far as 1080p and 1440p are concerned. Both ran beautifully at top settings, and if there were any drops (during particle-rich explosions, say), I couldn’t tell just by watching. 4K does brilliantly too, the GTX 1080Ti having no trouble at all with chaotic brawls around large arenas. 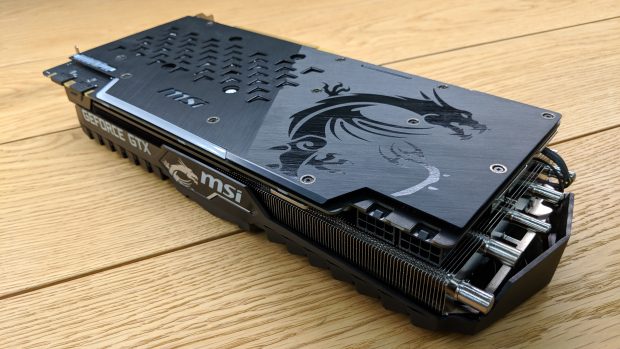 Hitman also gets on very well with this card, though not as well as Doom – in fact, at 1080p, there wasn’t much visible difference between this and the GTX 1070Ti. The frame rate even had its worst drop in the very same place - a short foray onto a penthouse balcony. 1440p still looked great, but with negligible differences to report compared to 1080p.

If that sounds a bit down, know that that 4K runs like a relative dream. Funnily enough, I couldn’t tell the difference once again (besides sharpness) between this, 1440p and even 1080p without an fps counter – you could argue that there’s something a bit off about not getting bigger gains at lower resolutions, but it’s 4K we’re really here for, and good 4K is what you get.

Middle-earth: Shadow of War cuts a nice figure on all resolutions. It’s particularly consistent at 1080p and 1440p, while 4K takes a slight hit but still goes strong. Only in the most densely detailed (or NPC-stuffed) scenes did it appear to drop below the magic 60fps.

While Rise of the Tomb Raider was always smooth as well, it wasn’t always stable; at 1080p with Very High settings, it could switch between lush mega-slickness to more modest (but still good) performance. 1440p was a similar story, though it should be said that you probably won’t be able to tell without a high refresh rate monitor. 1440p is also the resolution where most cards start to stumble with this game, so the fact that the GTX 1080Ti never dropped too far is still quite impressive. Even 4K, which was clearly a tougher test, remained fairly silky. 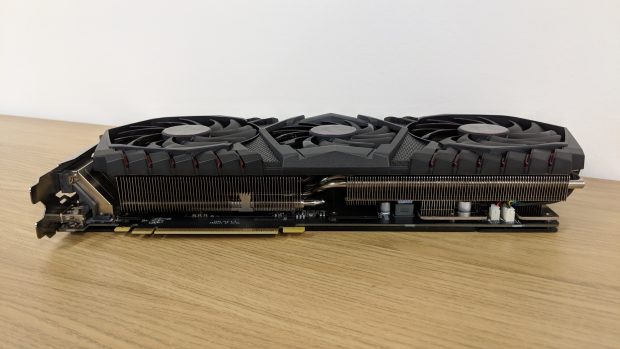 So far, the GTX 1080Ti has mostly been walking it, but I was kind of expecting Total War: Warhammer II – a demanding bastard of an RTS – to trip it up. Not so. At 1080p, the battle map runs as well as you’d like, and although the campaign map initially looks like it’s going to give the card a harder time, it’s only briefly and barely. 1440p was great stuff as well, again using all the highest settings.

4K, however, is where the GTX 1080Ti meets its match. The battle map doesn’t run too badly when viewed from the air, but zoom in on a unit and the frame rate collapses. The exact same thing happened on the GTX 1080, so it’s a shame the extra money isn’t enough to rise above it. There was some micro-stuttering on the campaign map, too.

As usual, Wolfenstein II: The New Colossus ran vastly better. These was a single stutter at 1080p when we rounded a corner straight into a startled Nazi guard, but otherwise, everything is exquisite. 1440p remains excellent too, and when we recreated the corner meeting with the Nazi, that stutter didn’t re-occur. 4K is just dandy, too, with no big issues to speak of.

Similarly, The Witcher 3: Wild Hunt works very well with the GTX 1080Ti across all three resolutions. 1080p and 1440p are both splendid, to the point where this is the only game where this card outperforms the GTX 1080 by something approaching a significant margin. It can also just about handle maxed-out 4K, though since this was accompanied by the occasional fps hiccup, it’d be wiser to turn some stuff down. 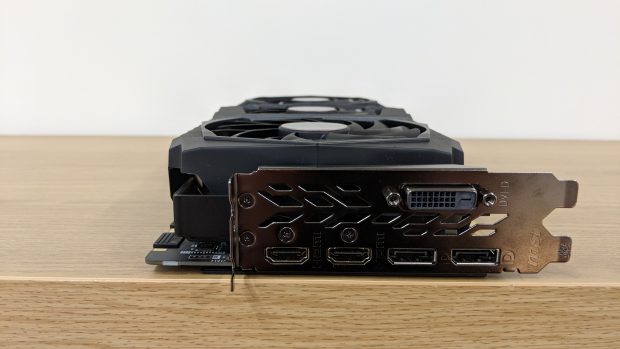 Assassin’s Creed Origins keeps its composure at 1080p, even in the typically GPU-punishing, densely-packed villages. 1440p is almost as good, though suffers from occasional hesitations on the highest settings, and 4K takes a much harder hit, its diminished smoothness immediately visible. That said, it didn’t do as badly around the populated areas I was expecting.

All in all, this isn’t some massive generational leap that many may have hoped for, but it is an extremely potent graphics card. If money’s no object, then this is indeed the best you can buy for single-card 4K gaming. I can also attest to this particular MSI model being very well-made indeed. Strong backplate, sturdy plastics, an extra HDMI output for VR, RGB lighting – all the trimmings are here, and while the GP-102 is a big ol’ GPU, the card as a whole is no longer and hardly wider than most GTX 1080s I’ve handled.

The exceptions, build-quality-wise, is that the fans can get pretty loud. It’s not actually like the decibels are particularly high, but the whirring is relatively high pitched, so it cuts through ambient and in-game noises with an unusual decisiveness.

This isn’t the big issue, though. While this does edge ahead of the GTX 1080, it’s so much more expensive that mere edging doesn’t really seem enough. This is supposed to be the final word on 4K, but Warhammer II and The Witcher 3 – to name just two – show that it’s not. I feel quite bad for saying this because gaming with it has been rather enjoyable, but most of the praise given above could equally apply to its non-Ti little brother. Even if the heart says to splurge, the head says to stick with the GTX 1080.