If you've ever wanted to buy a new graphics card for playing games at 2560x1440, there's literally never been a better time to buy one. There are just so many of them! Nvidia's RTX 2060 already does a pretty fine job of it - so much so that it's currently my top graphics card recommendation - and there's also the even cheaper GTX 1660 Ti, AMD's Radeon RX Vega 56 and Vega 64 cards, too, and in less than a week we'll have AMD's new Radeon RX 5700 and RX 5700 XT Navi cards to pick from as well. And, of course, there's the RTX 2070, which is even better than the RTX 2060 at 1440p gaming but is also rather expensive.

Enter Nvidia's RTX 2070 Super card - an even faster version of the RTX 2070 for a similar-ish sort of price. Coming in at £475 / $499 at time of writing, the RTX 2070 Super promises nippier ray tracing performance and even more oomph than a GTX 1080 Ti for less than five hundred big ones. Is it truly as super as it sounds, though? Here's wot I think.

As you may have already seen in my Nvidia RTX Super primer, the RTX 2070 Super is sort of like the Ti equivalent of the RTX 2070, but also not quite. The fact that Nvidia's priced it pretty much the same as the original RTX 2070 card makes it feel, to me at least, probably more like what the RTX 2070 should have been when it first launched at the end of 2018.That is, an absolutely flawless 1440p card that can take a decent stab at doing all its titular real time ray tracing gubbins while also offering a decent 4K experience at the same time (albeit without the ray tracing). 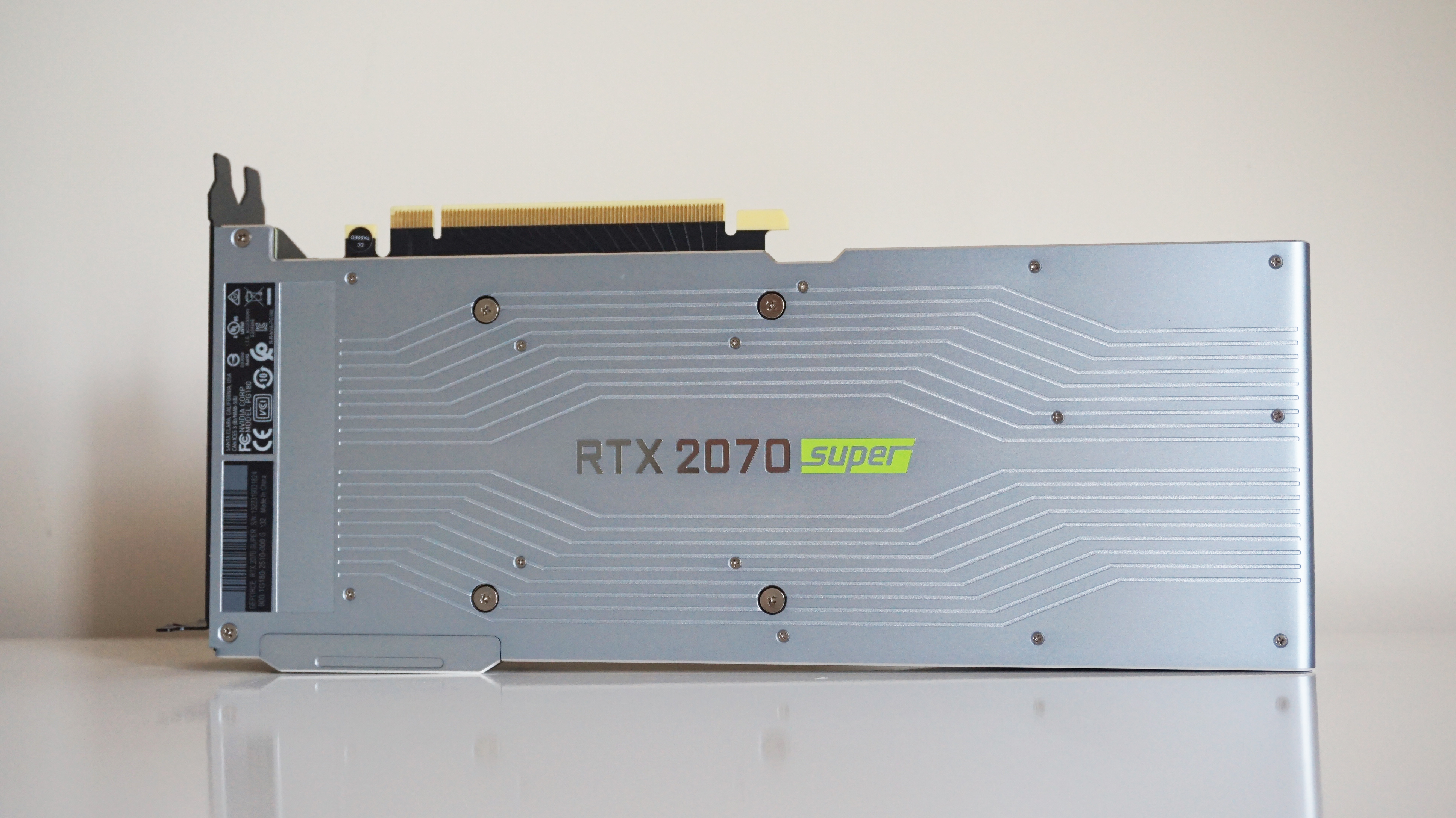 There's also the fact that AMD are about to launch their Radeon RX 5700 XT in just a couple of days time, which is also supposed to offer superior RTX 2070 performance for even less money at $449 (UK pricing TBC). We'll have to wait until Sunday July 7 to see how it really stacks up against both the RTX 2070 and this Super variant, but one thing is certain - there has never been such hot competition to fill this particular graphics niche.

I think part of the reason why I'm slightly less enthused about the RTX 2070 Super than I am the RTX 2060 Super is the fact that I've only been able to compare it against one of the very best RTX 2070 cards you can currently buy. Nvidia never sent me the Founders Edition of the RTX 2070 when it first came out at the end of last year, so I've only ever had Zotac's really rather nippy AMP Extreme edition to look at for testing - and judging by the AMP Extreme's superior performance in my big RTX 2080 Ti benchmark showdown, is probably about as good as RTX 2070 cards get.

As such, the RTX 2070 Super's results probably don't look quite as impressive as they might have done against a more typical RTX 2070 card. In fairness, Zotac's AMP Extreme is also pretty darn expensive, going for £500 / $530 at time of writing, so at least there's some consolation to be found in the fact you're getting similar if not slightly better performance with the RTX 2070 Super for a lot less cash.

So let's take a look at those numbers, then. Whereas the RTX 2060 Super was delivering results up to 10fps faster than its non-Super counterpart at 1440p, my RTX 2070 Super results were more in the region of just 5fps quicker than Zotac's RTX 2070 - although there were a couple of larger gaps to be seen in older titles such as The Witcher III and incredibly well-optimised games such as Forza Horizon 4.

In these instances, you can see the flashes of brilliance hidden away in its RTX 2080-level GPU, as all the scores I've just described are practically neck and neck with those I recorded for Nvidia's RTX 2080 Founders Edition card. And man alive, wouldn't it be great if the RTX 2070 Super was, in fact, an RTX 2080 in disguise? After all, that's basically what's happened with the RTX 2060 Super and RTX 2070, so why not these two cards as well?

Alas, these results are very much the exception compared to the rest of my benchmarking suite, where the Super's average frame rates were so darn close to the regular old RTX 2070 that they practically demanded a photo finish in order to determine which one should end up on the winner's podium.

In Assassin's Creed Odyssey, for example, there was an average of just 4fps separating each card's Ultra 1440p benchmark scores (54fps for the RTX 2070 and 58fps for the Super), and a measly 2fps keeping them apart on Medium at 4K. Here, the Super managed a smooth 63fps, and the RTX 2070 an equally stable 61fps, but it's hardly the kind of rip-roaring performance gap that screams 'I'M A SUPER ASSASSIN!'

Monster Hunter: World showed a little bit more promise. Here, the RTX 2070 managed a respectable 51-63fps out in the Ancient Forest on Highest at 1440p, but the Super pushed that up to a much smoother 56-68fps. The gap narrowed a bit at 4K, all told, but while the Super's highs were maybe only a couple of frames ahead of its Zotac rival, reaching 54fps on Mid versus the Zotac's 50fps, the main advantage the Super brought to the table here is picking up the pace at the lower end of the spectrum, resulting in fewer jolts and stutters when the action got a bit heated and generally keeping everything feeling that much smoother. For instance, where the RTX 2070 ranged between 38-50fps on Mid at 4K, the Super bumped it up to a much more respectable 46-53fps.

It was a similar story in Total War: Three Kingdoms, too, albeit not quite to the same extent. Hitting an average of 58fps in its built-in battle benchmark, the Super's actual frame rate range stretched from 52fps all the way to 68fps. Zotac's RTX 2070, on the other hand, veered between 49-65fps, averaging 56fps overall. In truth, you'll probably feel this 'pulling up the frame rate socks' more at 4K than anything else. Like Monster Hunter, both cards were most comfortable on Medium settings at this resolution, with the Super averaging 59fps (dipping to 52fps), and the RTX 2070 settling down around 55fps but occasionally lurching down to 45fps.

The same goes for Shadow of the Tomb Raider. On Highest with its top SMAAx4 anti-aliasing enabled at 1440p, the Super managed to nudge its average frame rate just over the 60fps boundary line when I was wandering around the busy town square of Cozumel's Day of the Dead festival, ranging between 57-67fps. Zotac's RTX 2070, meanwhile, settled around the 54-62fps mark. The Super maintained a similar lead when I moved the resolution up to 4K, too. Using just its standard SMAA this time round (anything else absolutely nukes the frame rate), the Super produced a very respectable 54-59fps on High, which was just that bit smoother than the RTX 2070's range of 49-55fps.

Alas, despite all its added Tensor FLOPs and other ray tracing-enhancing doodads, the RTX 2070 Super showed an even smaller improvement when I tried switching on Tomb Raider's ray tracing options, offering an average of just four frames improvement on Highest at 1080p with its ray tracing shadows set to Ultra. It's not really the kind of four frames you're likely to really feel either, as the RTX 2070 Super's average of 53fps isn't really that much smoother than the RTX 2070's average of 49fps. I'll be going into more detail about its ray tracing performance in a separate article once I've had a bit more time to look it at more closely, but needless to say, I'm not holding out much hope here. 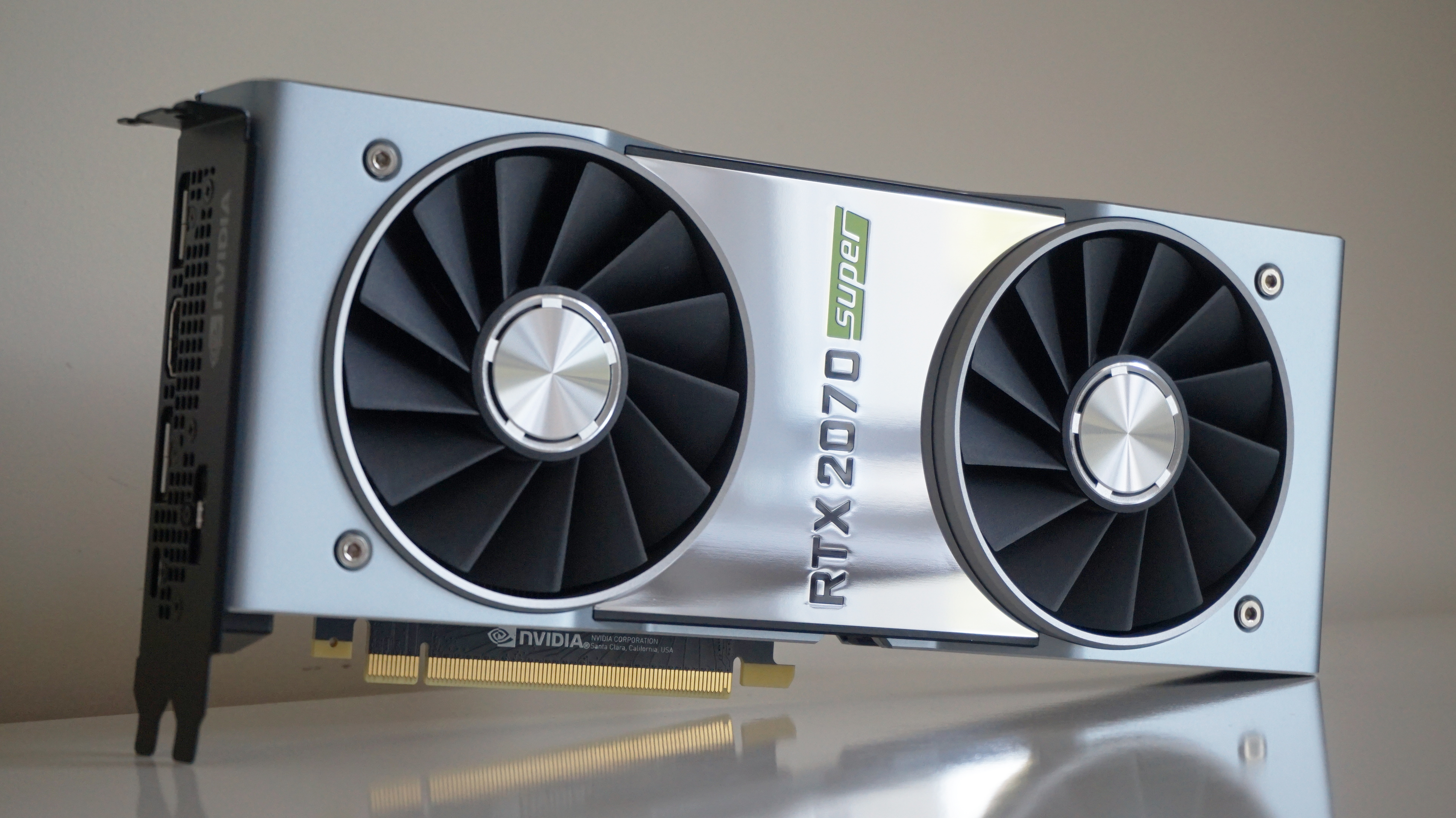 Metro Exodus was arguably even more dispiriting, as both cards' ray tracing and non-ray tracing results were so close that I doubt you'd be able to tell the difference without the aid of a frame rate counter. On Ultra at 1440p, the Super averaged just a couple of frames more than the RTX 2070 overall, hitting 56fps rather than 53fps, but both stumbled down to 31fps at times. It was exactly the same story at 4K, too. Despite the Super being just three frames ahead of the RTX 2070's average of 48fps on Medium, they still hit the same 31fps lows as before. Switching on Metro's ray tracing option didn't widen the gap by much either. On Ultra at 1080p, for example, the Super averaged 60fps with lows of 34fps when ray tracing was set to High, while the RTX 2070 averaged 57fps with lows of 33fps.

As a result, I'm just not sure the RTX 2070 Super is really worth it. Like, it is better, just, and I must admit that Nvidia's new Super RTX game bundle (which gets you a free copy of Control and Wolfenstein: Youngblood - regular RTX cards still only get Wolfenstein, by way of comparison) does help sweeten the deal slightly. I mean, you might as well go for it if you're in the UK, as even the cheapest RTX 2070 is only £5 less at time of writing (going for £470 vs the Super's price of £475). US buyers, however, have a slightly tougher decision on their hands. There, the cheapest RTX 2070 is $20 cheaper than the RTX 2070 Super's entry-level price of $499, so it really comes down to whether you want that free copy of Control.

I should note, of course, that the results I've detailed above are only for Nvidia's Founders Edition of the RTX 2070 Super, and I'll be testing more third party versions of this card very soon. Those, for instance, might offer up larger gains than what we've seen with the Founders Edition, but I'll be very intrigued to see whether any of them will be able to match what AMD's meant to be offering with its even cheaper RTX 2070-level competitor, the $449 Radeon RX 5700 XT. Only time will tell, so make sure to check back on Sunday July 7th for the final verdict.