Nvidia's GTX 1060 has been the cornerstone of many a gaming PC over the last couple of years, but its time in the sun is slowly coming to an end. Indeed, it was technically succeeded by Nvidia's 16-series of GTX graphics cards earlier this year when the GTX 1660 and GTX 1660 Ti arrived. Now, though, there's another 16-series card on the block: the GTX 1660 Super. But how much does the Super improve on the old 1060, and is it a decent upgrade? Let's find out with some sweet bar charts.

To test each card, I paired them with my Intel Core i5-8600K CPU and 16GB of Corsair Vengeance 2133MHz RAM and put them through my general benchmarking suite, taking an average frame rate from either their own built-in benchmarking tools or from my own repeated manual gameplay tests. The games include Metro Exodus, The Witcher III, Final Fantasy XV, Shadow of the Tomb Raider, Total War: Three Kingdoms, Assassin’s Creed Odyssey, Monster Hunter: World and Forza Horizon 4.

For this particular test, I've used Zotac's GeForce GTX 1660 Super Twin Fan and the Asus GeForce GTX 1060 OC 9Gbps Edition (6GB). The latter isn't actually available to buy any more (and hasn't been for some time), but when it was available it was one of the faster GTX 1060 cards you could buy. As a result, my GTX 1060 are probably more of a best case scenario for this type of card.

The Zotac GTX 1660 Super, on the other hand, is very much at the other end of the spectrum, and is currently one of the cheapest 1660 Super cards you can currently buy. It doesn't deviate from Nvidia's reference specification for the GTX 1660 Super, either, so these results should be taken as more of a baseline experience rather than the absolute pinnacle of 1660 Super performance. Still, with all that in mind, let's get to those lovely charts.

Let's start where both cards are most comfortable: good old 1920x1080 gaming. The GTX 1060 was once our best graphics card choice for this particular category, and it still puts up a pretty decent fight over on High settings. On today's crop of Ultra-fied games, however, it's starting to fall behind, often averaging just 40-45fps in most games - unless you're talking Forza Horizon 4, of course, where it's still got plenty of juice left. 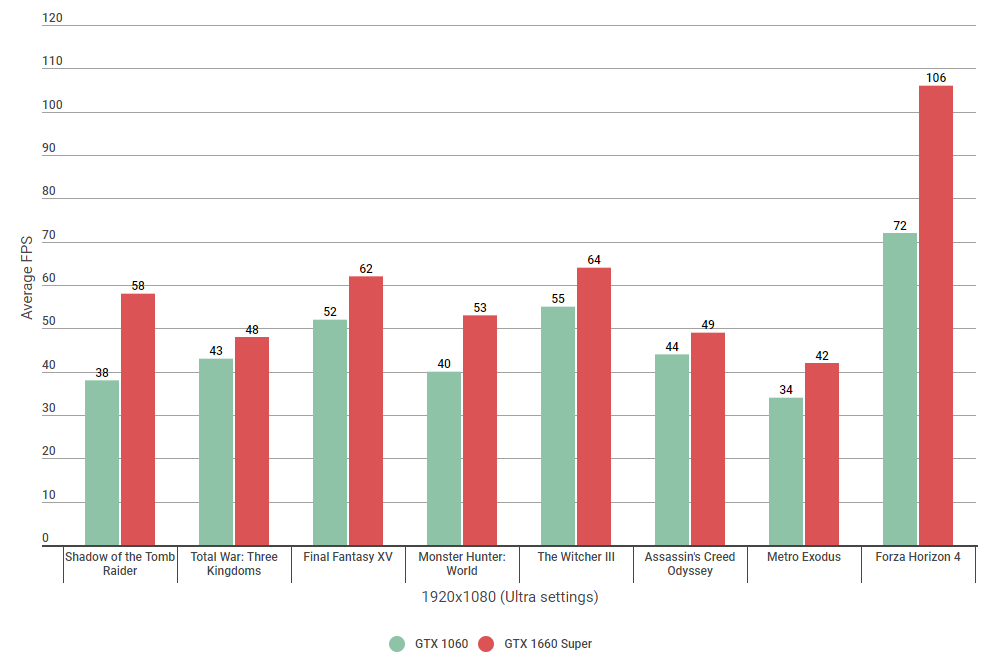 In most cases, the GTX 1660 Super offers a tangible step up in performance here, often offering a full 60fps average, or something very close to it. There are still some games that make it sweat a bit, of course, such as the ever-demanding Metro Exodus, Total War: Three Kingdoms and Assassin's Creed Odyssey, but an average of 53fps in Monster Hunter: World is still pretty darn playable in my eyes, even if it's not hitting the same 60-odd fps speeds as Shadow of the Tomb Raider, Final Fantasy XV and The Witcher III.

Move down to High settings, however, and the GTX 1060 still puts in a very good showing at 1080p. I haven't included the games that were already verging on 60fps here (such as The Witcher III and Forza Horizon 4), but as you can see below, the GTX 1060 is more than capable of hitting that elusive frame rate on pretty much every other game going here - except, of course, the beast that is Metro Exodus. 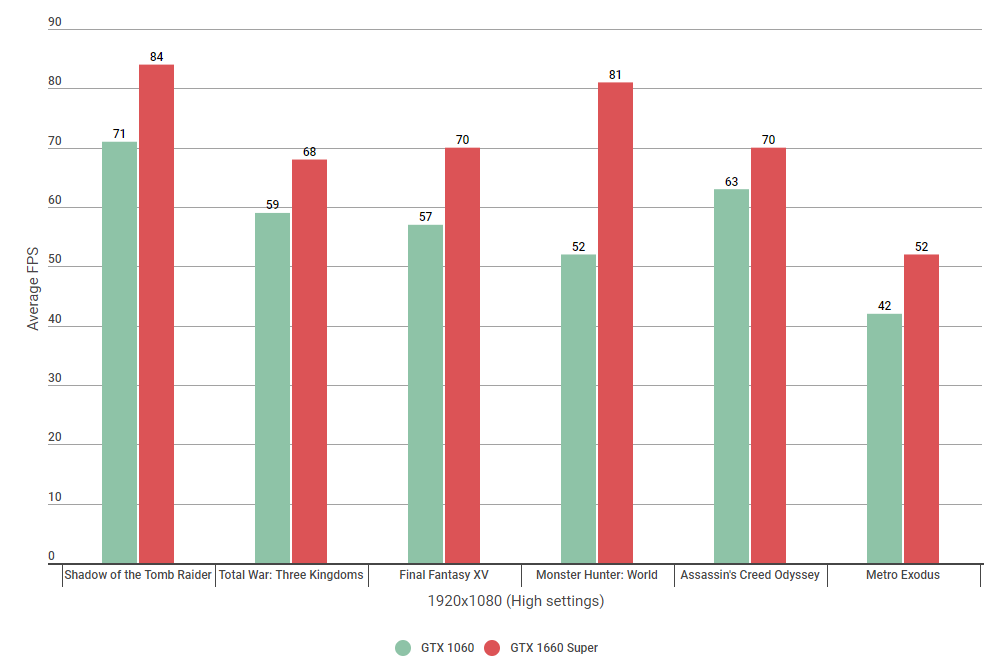 In fairness, even the GTX 1660 Super struggles with Metro here, although its average frame rate of 52fps is definitely a heck of a lot smoother than the GTX 1060's 42fps. However, while the GTX 1660 Super still offers a near 10 (and in some cases 15) fps boost over the GTX 1060 at this particular quality setting, you're only going to be able to see those 70+fps speeds if you have a high refresh rate monitor. Without one, all you'll ever see is 60fps, which is pretty much what you'll get on the GTX 1060 anyway.

In this light, then, the GTX 1660 Super is probably only worth investing in if you're absolutely desperate to play games on max settings at this resolution (on which note you should really just get the more powerful and ever slightly more expensive GTX 1660 Ti instead, if I'm being honest), or you want to indulge in those higher frame rates.

Instead, it's at 1440p where the GTX 1660 Super stands out the most. Here, you can really see and feel the difference over the ageing GTX 1060, as the graphs make clear below. Now, admittedly, even the GTX 1660 Super isn't really intended as an Ultra settings kind of card at this resolution, but while a lot of games simply descend into stuttering slideshows on the GTX 1060 here, the GTX 1660 Super does, at least, turn them into something vaguely playable. Of course, an average frame rate in the mid-40s is hardly ideal, but I'd stomach an average of 48fps in The Witcher III, for example, whereas I definitely wouldn't make do with 37fps, for example. 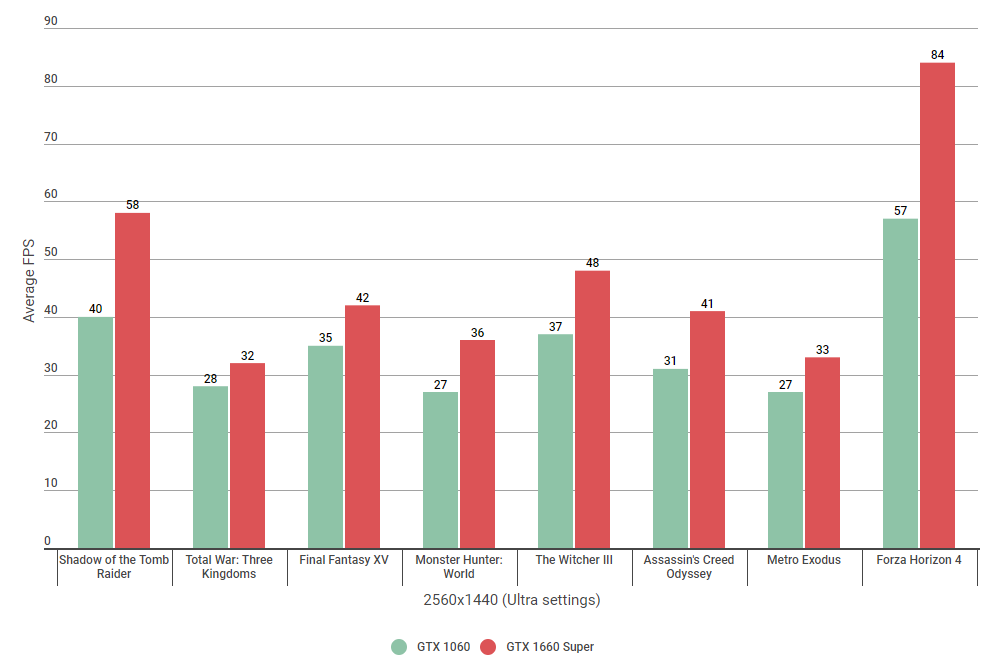 Moving down to High, the GTX 1060 still puts out some pretty decent frame rates here, but we're still looking at speeds in the 35-50fps region, rather than 45-60fps like the GTX 1660 Super. Metro Exodus is still the bane of everyone's lives here, as is Total War: Three Kingdoms to some extent, but the 10fps gains offered by the Super in games such as Assassin's Creed Odyssey and Monster Hunter: World is really quite substantial - not to mention the almost 20fps boost you get in Shadow of the Tomb Raider.

There are, of course, still some games where the GTX 1060 holds its own against the GTX 1660 Super, such as Final Fantasy XV. Here, each card's average frame rate was so similar they felt practically identical. The Super wasn't much better at handling all of Nvidia's extra effects, either, which I was hoping it might given its faster memory banks. You're also unlikely to see much of a difference in older games like The Witcher III, too, as here there was a difference of just 5fps - and to me, 52fps feels pretty much just as smooth as 57fps. 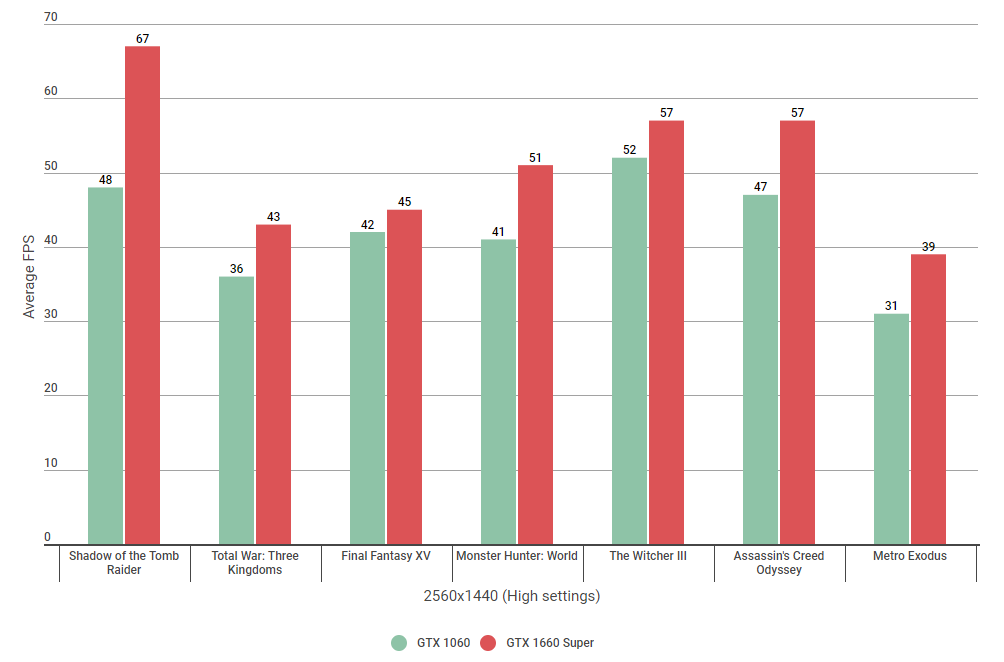 However, drop the settings down to Medium and the GTX 1660 Super once again makes its presence felt. Here, Final Fantasy XV almost hits that sweet 60fps spot while the GTX 1060 is still limping along in the mid-40s, and Monster Hunter: World becomes a similarly smooth dino-hunting experience compared to the GTX 1060's even slower average of 41fps (and no, that's not a mistake, the GTX 1060 really did produce exactly the same average frame rate on MHW's Mid settings as it did on High during testing). 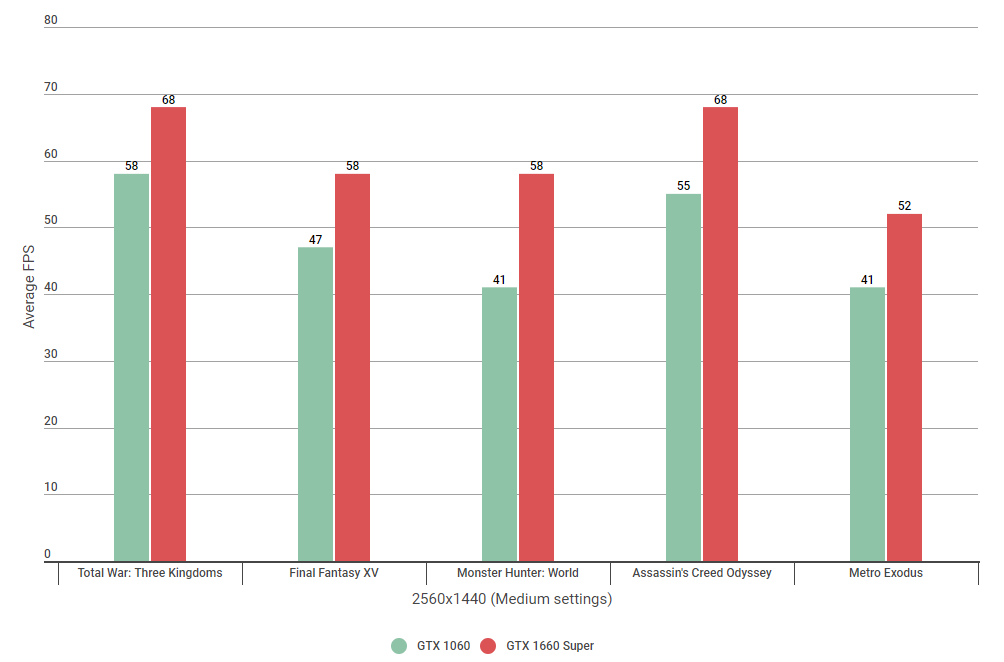 Most importantly, the GTX 1660 Super is finally able to tame Metro Exodus at this resolution (sort of), whereas the GTX 1060 simply isn't cut out for it. The GTX 1060 still offers a near-60fps experience in games such as Assassin's Creed Odyssey and Total War: Three Kingdoms here (which again, will feel exactly the same as the GTX 1660 Super on a regular 60Hz monitor), but overall, it's definitely starting to show its age.

As you'd probably expect from a next-gen graphics card, the GTX 1660 Super does offer a sizeable improvement over the GTX 1060, but if you're still playing games at 1080p on a standard 60Hz monitor, the differences aren't going to be as big as you might expect. Yes, it's a much more competent card for playing games on Ultra quality than the GTX 1060, but if you're happy on High then the GTX 1060's still got plenty of life in it. As such, I'd only say the 1660 Super was worth upgrading to if you have (or are thinking about upgrading to) a high refresh rate monitor, or you're absolutely determined to play games on the highest possible settings - and if the latter is the case, then I'd strongly urge you to get the GTX 1660 Ti instead - as my GTX 1660 Super vs 1660 Ti makes clear.

However, for those looking to move up to a 2560x1440 monitor in the near future, then the GTX 1660 Super is definitely worth considering - although again, you should really go for the GTX 1660 Ti here, in my honest opinion, as it only costs another £30 / $30 on top of the 1660 Super and gives you even faster frame rates for playing on High at this resolution.

I should note, though, that you probably shouldn't be upgrading your graphics card at all right now, because that bestest of best deals holidays Black Friday is just around the corner, during which you'll almost certainly be able to pick up some sort of GTX 16-series card for a lot less than it is right now.