At long last, we have a successor to the Nvidia GeForce GTX 1050 Ti. But just how much faster is Nvidia's new GTX 1650, and is it worth the upgrade for current GTX 1050 Ti owners? To help answer that question, I've gone and made some more graphs, pitting each graphics card against each other to see how they fare at 1920x1080 across a variety of different quality settings - because let's face it, you can't have a competition for the best graphics card under £150 / $150 without at least one bar chart somewhere.

I'll be upfront. I'm personally not convinced the GTX 1650 is the graphics card you should be buying in this particular price bracket. Instead, you should probably be thinking about the 8GB version of AMD's Radeon RX 570 if you've only got around £150 / $150 to spend, and you can find out more information on how the two cards compare in our dedicated GTX 1650 vs RX 570 comparison article.

But! For the sake of those of you who are keen to see what kind of benefits Nvidia's new Turing GPU brings to the mix over their outgoing Pascal architecture, have I got the graphs for you. After all, it's always interesting to see how big the leap is between two different generations of cards, especially when they're from the same xx50 family.

So, like normal, I've tested each card with my general games benchmarking suite at 1920×1080 to see how they perform across different quality settings. The idea is to see what it takes to get a decent 60fps in each game, and how far I'm able to push them before things get too choppy.

Paired with my Intel Core i5-8600K CPU and 16GB of Corsair Vengeance 2133MHz RAM, I’ve seen what each card can do on High and Medium settings at 1080p (mostly because these are the only realistic quality settings you're going to be using with these particular cards), and taken an average frame rate either from their own built-in benchmarks or from my own repeated manual gameplay tests to see how they stack up against each other.

To aid us in our quest, I've got Zotac's GeForce GTX 1650 OC edition and Palit's GeForce GTX 1050 Ti Storm X card, both of which are at the lower end of their respective price ranges - which, ironically at the moment, means they both cost an identical £139 in the UK right now. Still, this should give us a pretty good idea of what to expect as a baseline experience from each type of card, as well as

Starting with our High quality setting results (because, let's be honest, neither card are really up to playing games on Ultra), you can see from the chart below that the GTX 1650 offers quite the step up in terms of overall speed. With jumps of at least 10fps in a lot of games, the GTX 1650 is able to offer speeds on High that the GTX 1050 Ti could only ever dream of on Medium. 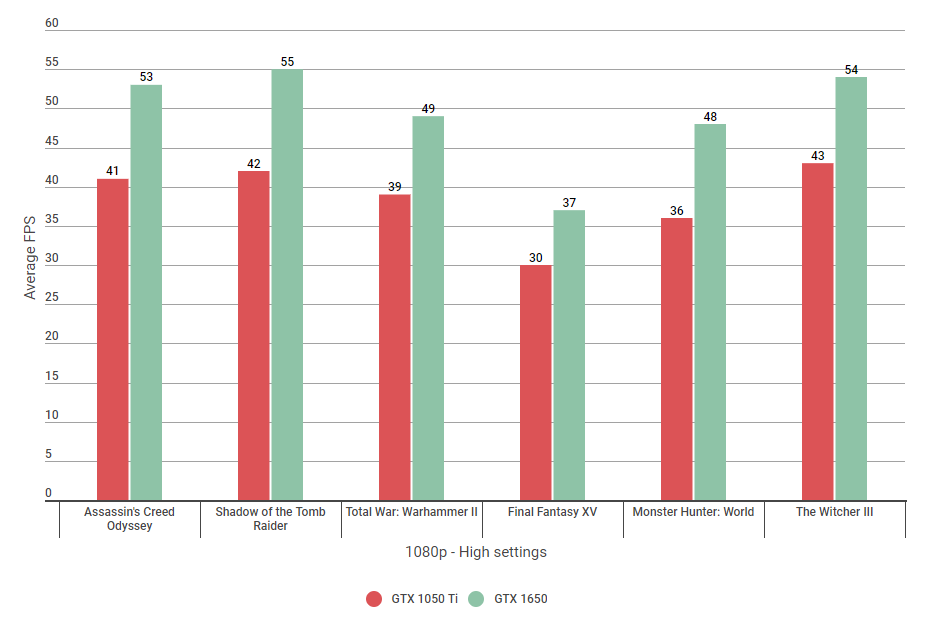 This is arguably the kind of generational leap you'd want from this kind of entry-level GPU, effectively letting you play at one quality setting higher than you could before. Final Fantasy XV is still a bit of a tough crystal to creak, all told, offering the smallest bump in speed out of my test games, but I'd argue that an improvement of an average of 7fps is still going to be just as noticeable as all the others. After all, every frame counts when you're erring on the lower-end of 30fps, and even a couple of extra frames can help turn it into something vaguely playable as opposed to a stuttering slideshow.

Arguably, though, you're going to be hitting the best speeds on Medium settings with these cards, and once again the GTX 1650 offers a welcome boost in this department, ranging as high as 15fps over in Assassin's Creed Odyssey. If you're wondering why Shadow of the Tomb Raider's results are exactly the same, fear not. For some reason, both quality settings produced pretty much exactly the same results when I had their basic SMAA anti-aliasing enabled during my tests, and it's something I've seen across several other graphics cards as well. 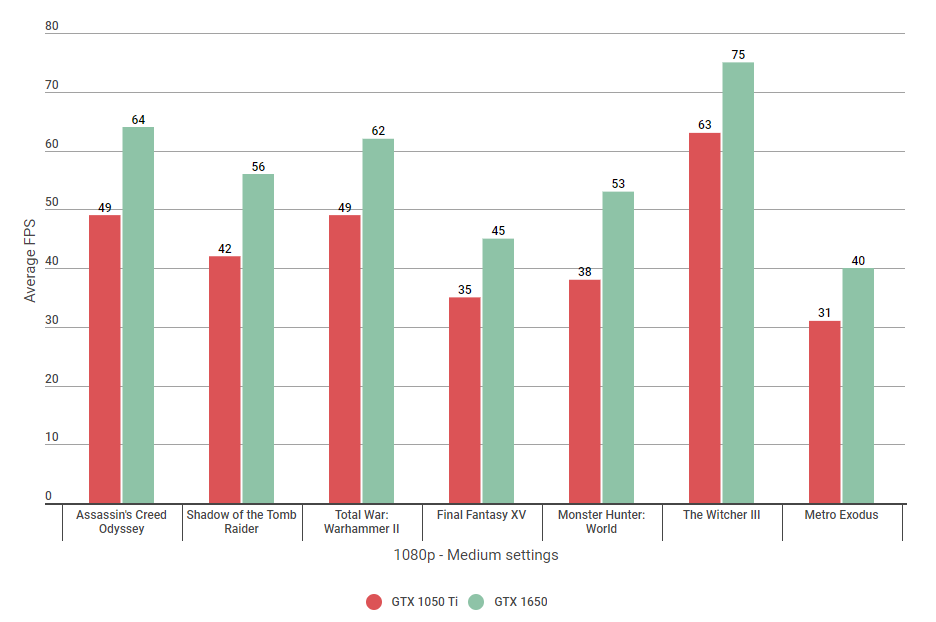 I've also added in Metro Exodus here, because it simply isn't playable on either card using the benchmarking tool's High preset. That's not to say you can't get playable frame rates at all on High quality in Metro Exodus with these cards (some creative tinkering with some of the other settings as outlined in my Metro Exodus PC graphics performance guide will almost certainly get you part of the way there), but for the sake of keeping everything fair and square I've kept everything in the benchmark's preset profiles as is in order to get a true measure of what 'Medium' quality really looks like. And what a difference Nvidia's Turing GPU makes, turning a just barely playable average of 30fps into something much more comfortable in the region of 40fps.

All in all, the GTX 1650 offers a pretty decent performance bump compared to the outgoing GTX 1050 Ti, which, considering they cost exactly the same amount of money these days, makes the GTX 1050 Ti pretty much obsolete as an entry-level graphics card. As I mentioned above, though, the main problem is that AMD's Radeon RX 570 is also around the £150 / $150 mark these days, which is even faster than the GTX 1650.

There's no denying the GTX 1650 is a decent entry-level graphics card for those after something small and energy efficient, but in terms of raw power, the RX 570 continues to reign supreme as the best graphics card for cash-strapped 1080p buyers.