In Observer [official site], AKA David Cronenberg's Bladerunner, Rutger Hauer is having a very bad day. It begins with a phone call, some family problems, and ends in blood and regret. Hauer lends his voice to the player character, who is the titular Observer, a special kind of cop who can jack into suspects' memories, hopes and fears as a means of interrogation. To do so, he inserts a cable into a chip lodged in their brain and connects it to his own gray matter.

Around a quarter of the way through this particular grim night, he dives into the mind of a person who has just died, an act of necro-hacking that is totally against protocol. That's when things get really weird.

For most of its slender running time, Observer is a masterclass in cyberpunk horror. You're in the dirt and the grime and the grease, elbows deep in the detritus of a society that discards its poor and sickly. The apartment block in the Stacks where you spend the majority of your time is a finely crafted slice of life (and death), brilliantly gesturing toward an entire world beyond itself, while at the same time acting as a perfect claustrophobic warren of inescapable nightmares. 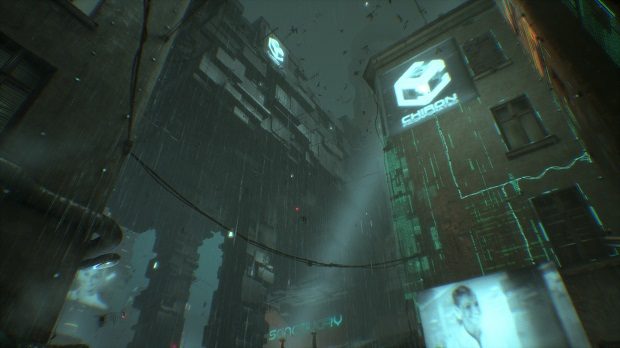 Within that warren, you set up crime scenes, using methods vaguely reminiscent of the Batman Arkham games. Instead of a magical detective cowl you rely on implants that allow you to scan for tech or biological matter. There are key items to find at each important scene but there's a wealth of detail to explore – the apartments are so convincing as recreations of lived-in places that you can almost smell them.

Everything plays out from a first-person perspective, and as you're looking for clues, the UI of your implant's visual filters will tag and then discard items in the beautifully filthy environments. Maybe it considers drawing your attention to a microwave or a puddle of grease, and it'll draw a fuzzy box around them before passing over, marking them to be 'ignored'. It's this kind of detail that makes the game such a pleasure and it carries through to every carton and keyboard. There's so much repurposed and recognisable technology, and so many relics of the early twenty-first century still in use. 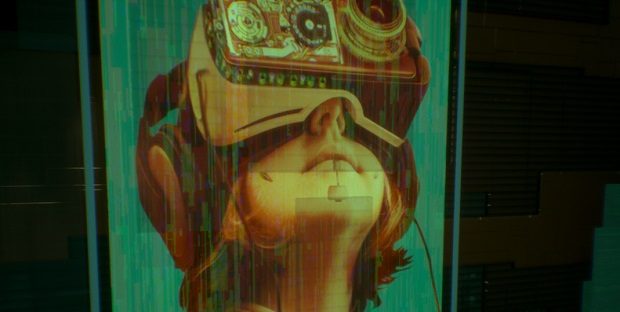 Every single piece of body-mod tech in the game feels like a compromise, whether it's the sagging and flaking prosthetics of a war veteran with a broken mind and body, or the flickers and distortions that interfere with your own vision. Observer doesn't need heavy doses of exposition because it trusts its players to read the world and characters rather than relying on dumps of data. Only a few conversations are necessary to complete the game and the majority take place through intercoms because a lockdown has trapped all of the tenants in their apartments. Through these short conversations you can learn about the police, the megacorp on much of the marketing, politics, the role of robots in the world, VR, drugs, and personal stories as well.

I'd gone in expecting a “mind-hack insane criminals and experience their terrifying delusions” sort of game, but this is a far sadder and stranger story. Sometimes its notes of empathy don't quite ring true – a 'sexbot' admonishes Hauer when he tells it (her?) that he won't bother saying goodbye, “Because that would humanise me?” But there is heart and as ugly as the violence gets, it's never meaningless. Cruel, yes, but coloured by regret and desperation rather than glee or titillation. The actual act of mind-jacking is seen by many of the people you speak to as a violation not just of their rights but of their entire character. The Observer is not a pleasant protagonist.

The main difference between our world and the future version of Krakow ties into augmentations, but they've changed the world through perception rather than through practical changes to the body. That's the case in the Stacks, at least, where the lowest class of citizens live (they're actually categorised into a class). Public spaces are a glow of adverts that are often indistinguishable from propaganda – the implants allow targeted marketing to become part of the scenery on every wall and street corner, and even in the corridors of the apartment block. 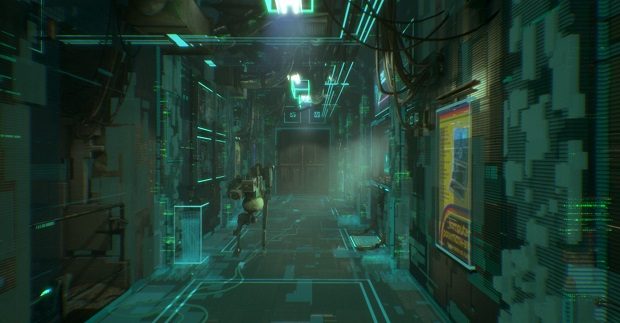 You're never sure if the things you're seeing are real or superimposed onto reality by an implant, but because Observer just provides this way of seeing the world without explaining it, you'll quickly stop worrying about that distinction. Just as in life, miraculous and/or terrifying technology quickly becomes a normal part of the human experience. If you can see it, it's real, even if you can't touch it.

As you might expect, this being a horror game, you can’t trust the evidence of your eyes (and implants) for the entire duration. So much of the game is about perception and it's during the first mind-jack, when you enter a dying man's mind, that the developers really start to play with the visuals. You replay the key moments of this man's life, building up to the moment he died, and scenes collapse, reconstruct, deconstruct and loop around you. It's spectacular and even if there's sometimes a sense that these sections are primarily a lightshow rather than an interactive narrative, when the lightshow is this good, I'm OK with that.

And outside of the mindjack segments there are puzzles to solve, and there are horrors to outrun and evade within them. The moments when the monsters become more explicit are few and far between – and the reality-shifting means their exact nature is unclear – but the very occasional stealth sections are when the game hits its lowest points. They're brief, thankfully, but as in Frictional Games' SOMA, Observer is much more interesting when it engages with its world and has you study and recoil from it, rather than when it's putting on a gory Halloween mask and chasing you down a corridor. 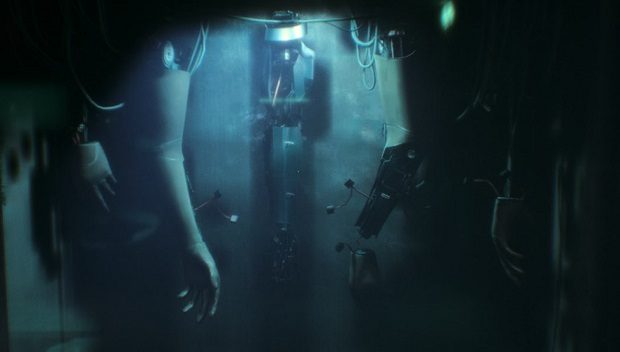 It's a shame that some of the more blatant and tired horror aspects detract from the actual horror of the science fiction. The most frightening scene in the entire game involves a memory of a job interview. It's like a Voight-Kampff test that is trying to distinguish social worth rather than humanity, but the results might be just as damning. A credit check for the soul.

There are more grisly terrors though, including some extreme body horror that made me flinch (in a good way) and some stock infernal imagery that made me frown (in a bad way). Mostly it's strong work. 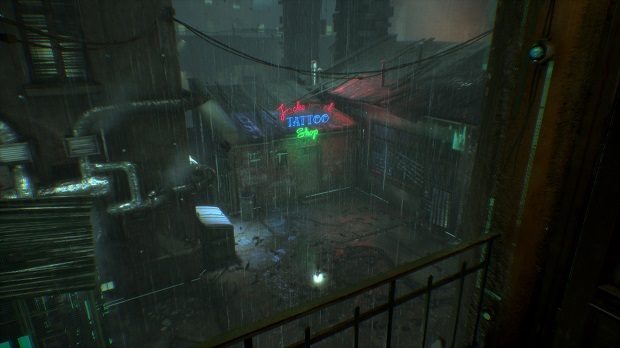 Observer is a gem, but a gem with very obvious flaws. These range from fiddly things that bother me just enough to mention them, like the dialogue options being off-centre and the pixel-sized targeting reticule used to select them often blending into the scenery. Then there's the time I confused the game and myself by completing two objectives in an unexpected order, leading to a bit of backtracking as I made sure every prompt had been triggered.

Feedback is occasionally a problem. Tasked with investigating the apartment of a “noisy neighbour” by one of the tenants, I entered the place to find buckets of blood and décor that Leatherface and family would deem “a little bit distasteful and OTT”. Rutger didn't monologue about it though, as if he'd seen nothing out of the ordinary. To tick the investigation off my list of tasks, and to have Rutger respond at all, I had to find a specific switch that opened up a safe with more specific evidence of wrongdoing. 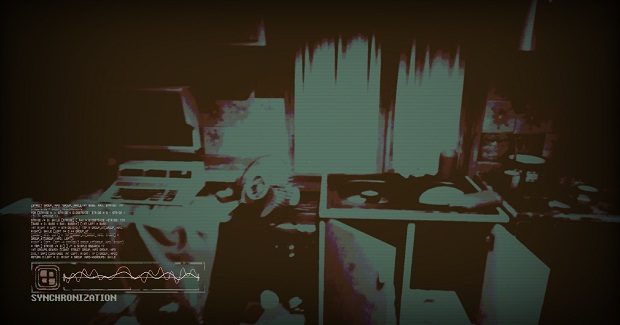 I can take occasionally clumsy design when it's backed by such fantastic imagery and world-building, all in the service of a story worth playing through to the grisly end.

While I was playing, I kept thinking back to my conversation with Cyberpunk 2020 creator Mike Pondsmith. This, I think, is a cyberpunk game that captures the social and political aspects of the genre, as well as the body horror and the credibility of the tech. What it doesn't have is the cool factor, and that's because we're only shown one part of the world - a part where everything has gone to hell and where nobody wants to draw attention to themselves. It's the Cronenbergian cyberpunk game I never knew I wanted, and it's shot right into my top ten of the year so far.