If you click on a link and make a purchase we may receive a small commission. Read our editorial policy.
Premature Evaluation is the weekly column in which Steve Hogarty explores the wilds of early access. This week Steve has been overseeing a tube station in Overcrowd: A Commute 'Em Up.

Commuting is the biggest self-inflicted wound in human history. Whole cities are designed around countless dead-eyed souls expending enormous amounts of physical and mental energy ferrying themselves between their bedrooms and the place where their employment happens, flushing in and out every morning and evening like fleshy clockwork, like turds on the tides. When the great revolution comes and we are freed of the shackles of capitalism, commuting will be a long dead nightmare told to frighten unruly children. You’ll never have to walk more than fifty feet to get where you want to be in my new and perfect socialist utopia, in which there are no modern contrivances like motorways or hospitals, and we simply trade Pogs, Nintendo DS cartridges and doodles of cool dogs for food and shelter.

As such, Overcrowd: A Commute ‘Em Up will one day be a valuable artifact of this darker time. It’s a Theme Hospital style isometric tube station builder, in which you must construct and operate a tube station from scratch, and then run it in such a way that your passengers don’t become so abjectly miserable that the game simply ends out of a profound sense of mercy. You keep everyone happy by meeting a set of criteria, ensuring that the trains run on time – not in the fascist way, but out of a genuine commitment to punctuality – that rubbish bins don’t pile up, that ticket prices aren’t too high and that there’s enough sickly fluorescent light with which to make out the haunted visage of your fellow commuter. 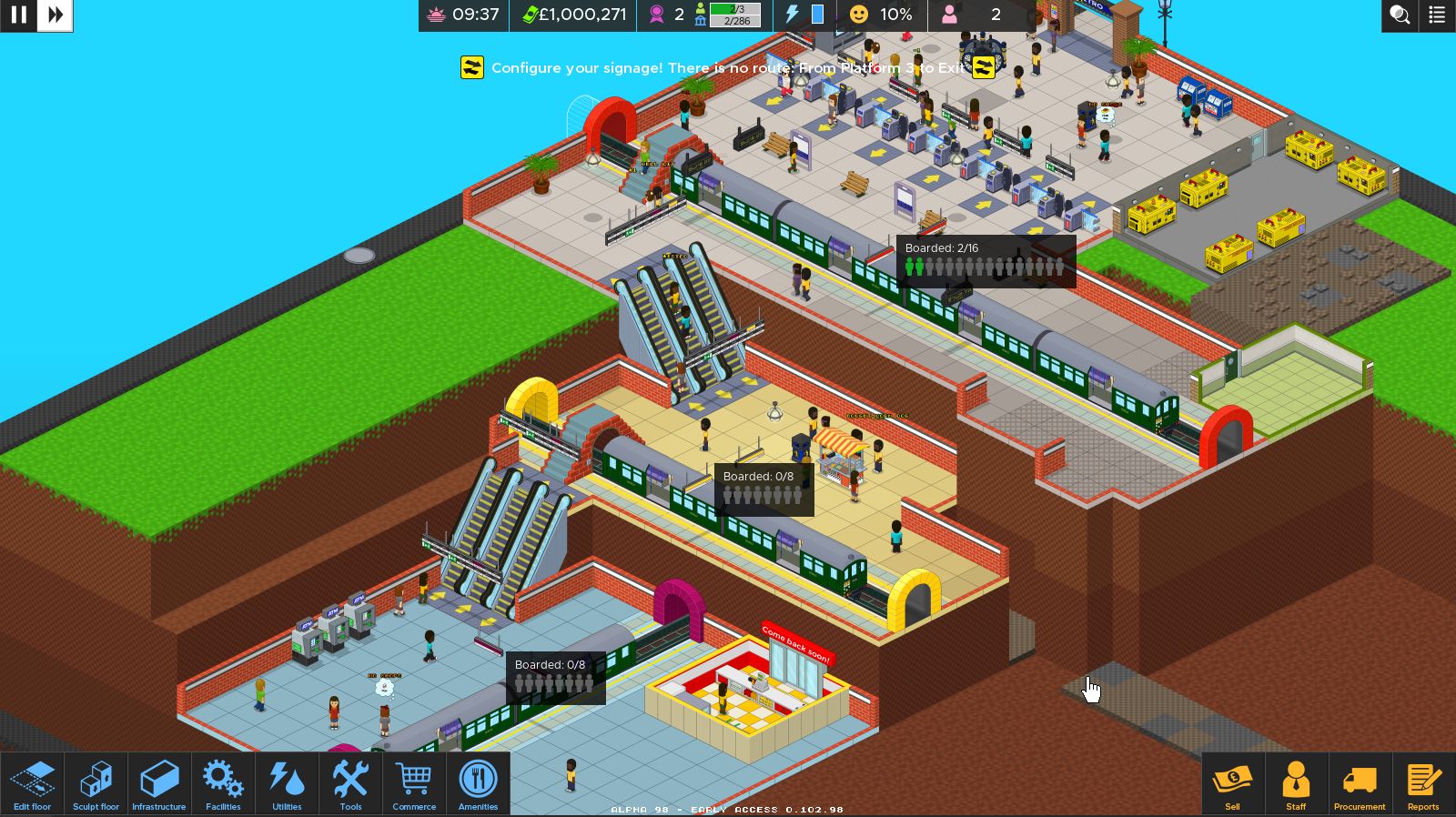 It’s immediately compulsive, if a bit fiddly in this early version, with a seed-generated campaign mode that walks a satisfying line between sandbox and mission-based levels. The maps on which you build are procedurally generated and littered with randomised chunks of immovable bedrock and water that encourage you to build corridors, concourses and platforms in interesting places and over four depth levels. Each subsequent map of the campaign mode sets you a series of increasingly difficult challenges: higher passenger numbers, more platforms and dirtier stations. As you progress, you keep all of your tech upgrades too, and so each new station offers you the opportunity to wipe the slate clean and start again with all of your newfound unlocks under your belt.

As somebody who occupies the sliver of the Venn diagram between Theme Thing fans and people who subscribe to more than one YouTube channel about how tube stations work Overcrowd pushes all of my buttons. Every last button, all at once, like the game is trying to factory reset me. It open palm slams its hands on my keyboard and drags them up and down the keys, like it’s got a password manager and is making a strong password for its Amazon Prime account, so that its ex can’t keep ordering free same-day delivery on kitchen towels. 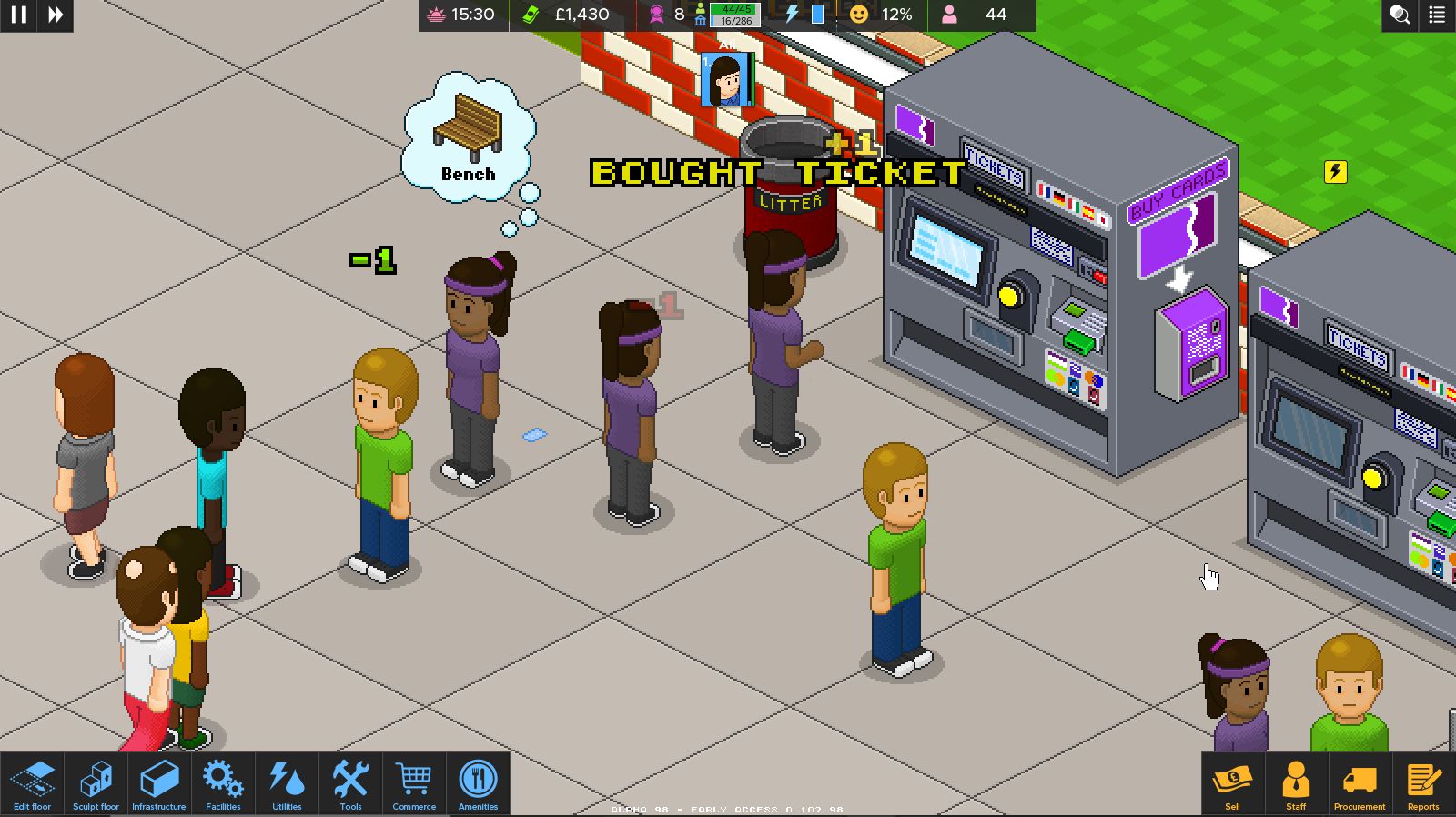 As such I can forgive most of this version’s rough edges and clumsy interface, and the meticulous micro-management, as overwhelming as it is, squeezes down hard on my dopamine glands. You must create efficient routes through your station by designating signage at turnstiles, pointing passengers towards specific platforms or to the way out. You build and furnish staff rooms, control rooms and utility areas with generators and wheelie bins and water coolers for your employees.

Tools need to be manually equipped, and staff have to be told where to stand in order to be at their most effective. Anything within their field of perception – litter, overcrowding, a hot puddle of commuter vomit – will be automatically attended to, but it’s up to you to constantly reassign them to different parts of the station as and when they’re needed. Your employees have troublesome human feelings too, and require such lavish luxuries as food, water, chairs and time off work to avoid becoming gibbering, nervous wrecks. All of this detail can be fussy, and can feel like pointless busywork when you’d rather be concentrating on expanding your increasingly congested tube station. This game would benefit from, and would be forgiven for, straight up swiping the staff zoning feature of countless other successful Theme X games. 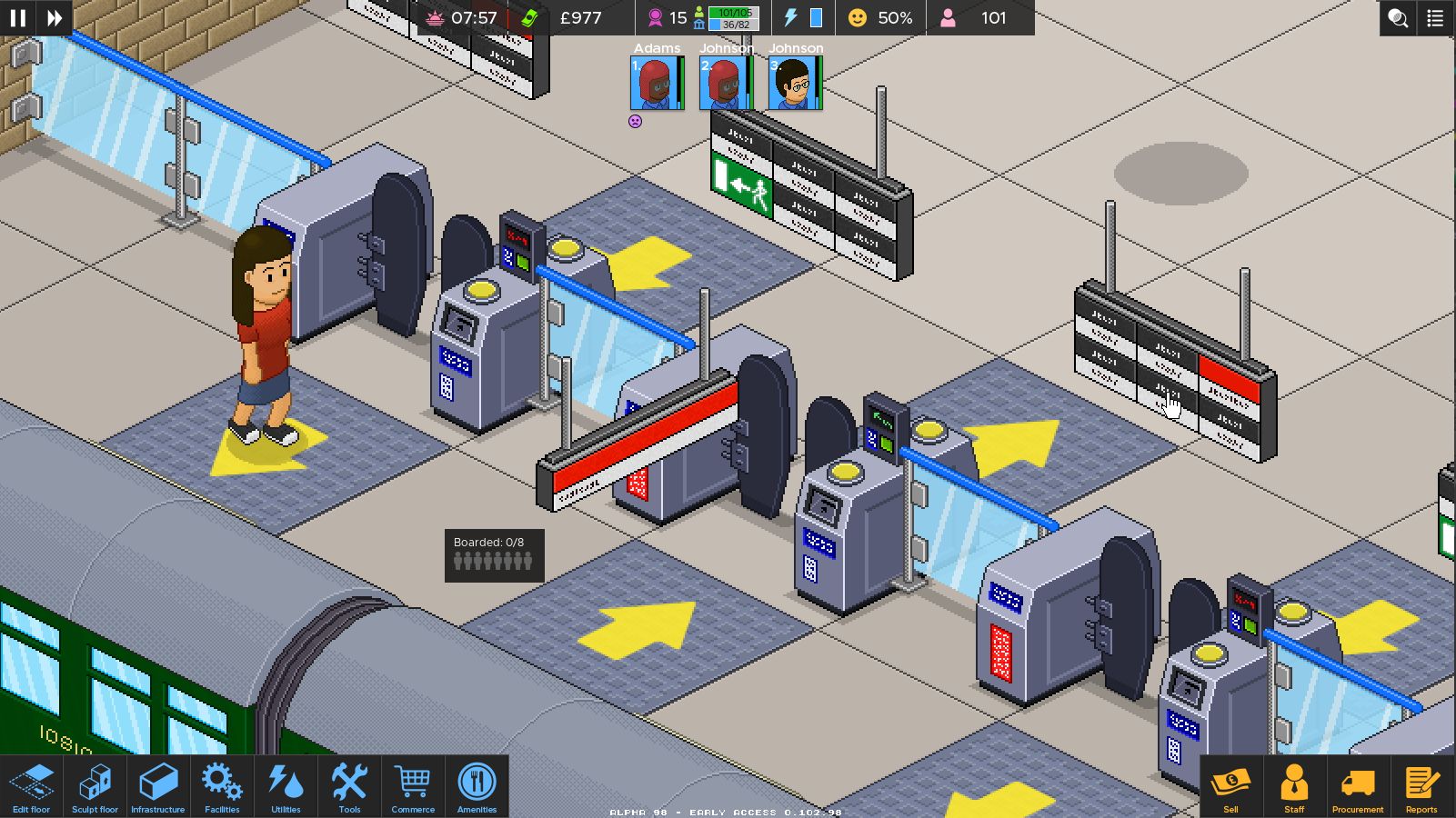 This staff management aspect of the simulation feels more like a hands-on, real-time strategy game than a passive base-builder, and as staff carry out their duties they earn experience points, become faster at their assigned task and less likely to break the thing they’re working on. Like your permanent tech upgrades, you carry staff with you to each new station, so even with frequent fresh starts there’s some tangible progress being made at each new stage of the campaign.

When you start to push up against the hard boundaries of each map is when Overcrowd shapeshifts into a third genre, becoming a 3D puzzler in which you’re trying to maximise platform space over multiple floors, tracks and entrances. Ideally you want your station to resemble a Marble Madness stage, with escalators and footbridges channelling commuters past shops and billboards and on to fancy upgraded trains with multiple, modern carriages, air conditions and automated signalling. Your goal is to create a smooth running machine operating at peak efficiency, to construct the beating heart of an interconnected city, to gaze with awe upon a well-oiled organ. 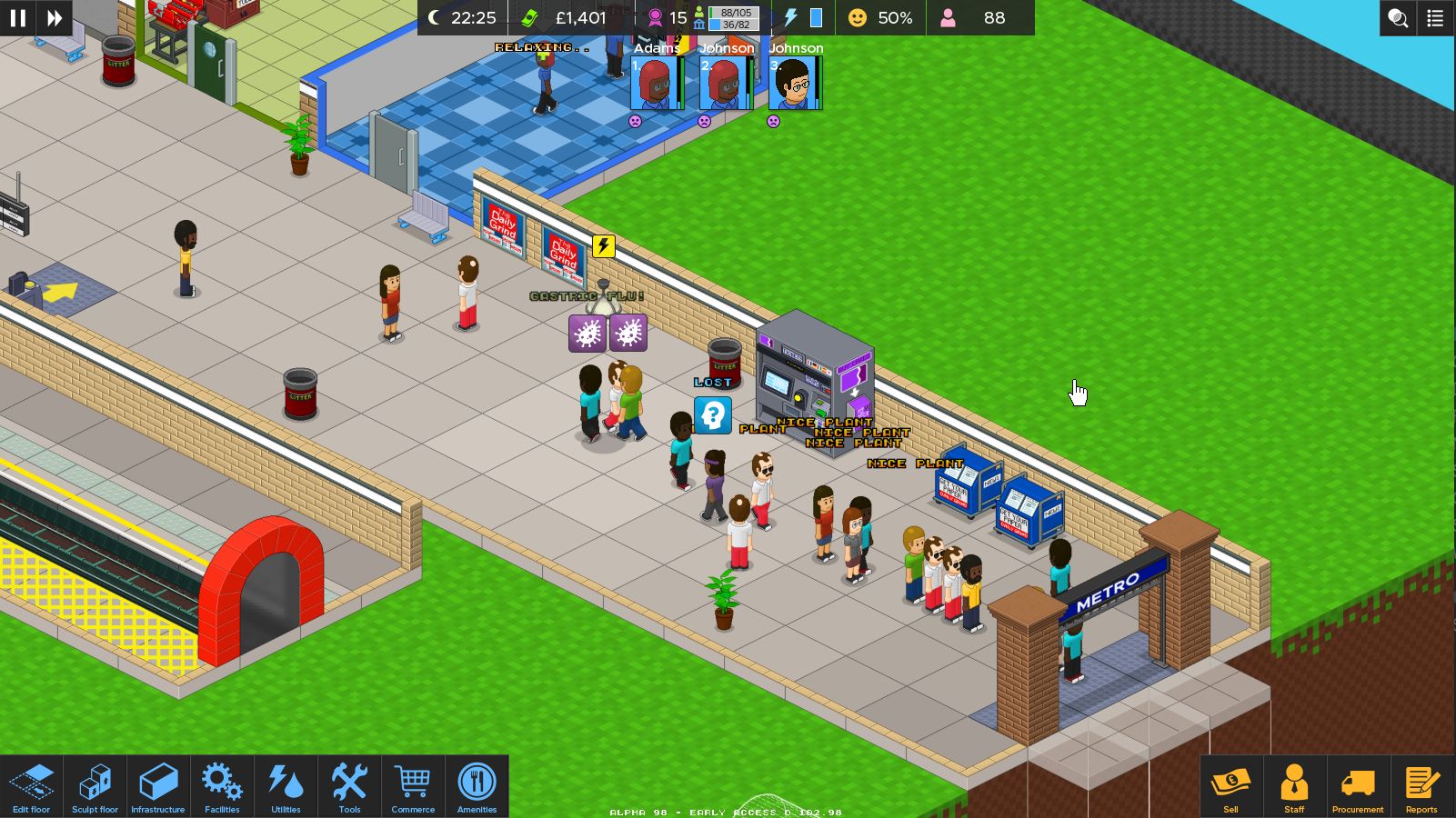 Reaching that glorious transit utopia is unreasonably challenging in this early access build, where passenger grievances seem to mount faster than they can be addressed, and your reputation can tank in a matter of minutes if you forget to empty the bins or screw in a lightbulb. Overcrowd has the fit and finish of a two-man job: performance slows to a crawl with larger stations, resolutions above 1920x1080 result in unusably tiny interface for ants, and much of how the game works is obscured behind a lot of clunky menu screens.

There’s loads to improve, but what’s here is already a wonderful mix of strategy and puzzling, and a compelling simulation of the inescapable misery of paying £158.30 a month to be locked in a hotbox of sweat and farts twice a day.