Path of Exile is already a very big, very demanding game. Ever since its first public beta debut, the free-to-play action RPG has grown steadily, layering new content and mechanics onto an already complex design. With the release of the massive Fall Of Oriath expansion back in August it grew into one of the largest action-RPGs ever made, ballooning from four acts (played three times on escalating difficulty settings) to a single ten-act campaign taking you all the way from opening to endgame.

As well as more than doubling the length of the game's story, Fall Of Oriath escalated from fantasy horror into a frenzy of apocalyptic God Of War-esque bloodshed, with you personally offing the majority of the world's deities over the course of the story. This December 8th, Grinding Gear Games hope to give successful godslayers a fitting endgame experience with their next expansion, War For The Atlas. I got to talk with producer Chris Wilson, who was eager to show off some of the new features and content in action, as well as share some details on what War For The Atlas brings to the table.

Path of Exile has always offered something for players to do once they'd finished up the main story arc (and difficulty loops). In earlier iterations of the game, it was a largely directionless romp in which players collected magical maps to parallel dimensions - the maps being items with their own random traits, as varied as any piece of armor - and used them to generate remixed, semi-randomised versions of familiar environments to rampage through in search of new monsters to kill, bosses to bother and loot to hoard.

Last September's Atlas Of Worlds expansion radically overhauled the endgame, bringing context and direction to it via a self-contained story arc, almost a second game in itself. Your journey through these randomly generated worlds was now charted on a grand Atlas, each potential zone type represented by a node. Your progression spiralling gradually inwards through increasing tiers of difficulty towards a final confrontation with The Shaper, a former Oriathan scholar somehow turned into a world-crafting god among gods.

Even as a regular Path of Exile player I've never beaten The Shaper. It's a long road to victory, capped off with the lengthiest and toughest boss fight in the game, but after talking with Chris Wilson, I don't feel nearly so bad about my failure. He admits that he's only ever managed to do it once. Path of Exile pulls no punches, not even for its creators.

As if things weren't rough enough, War For The Atlas raises the stakes, bulking out the endgame to encompass all the tilesets, bosses and monsters from Fall of Oriath, added to the Atlas’s pool of random worlds and spread out across 32 new nodes. There's even a few new unique areas that will be only accessible via the Atlas, such as the Pillars of Arun, an obstacle course requiring the use of a movement skill in order to hop between platforms, a twist never before seen in Path of Exile. Some areas include Atlas-exclusive new bosses to encounter, designed to be on par with the more complex, multi-phase fights that defined Fall Of Oriath 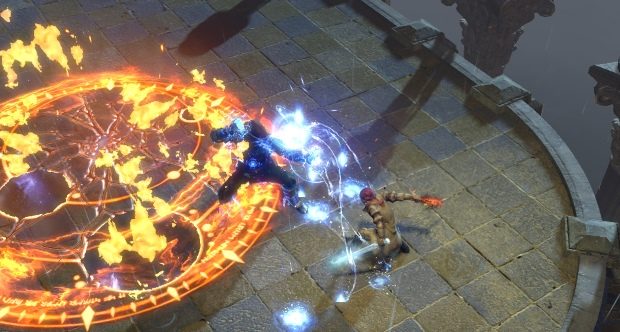 The biggest new wrinkle comes in the form of The Elder, a secondary ultimate antagonist and one somewhat more Cthulhoid in nature. After you've explored the Atlas for a while, this new enemy will make their presence known and start taking over parts of it, indicated by a wiggling tentacled outline around one or more map nodes. When you attack one of these maps you'll find it not only harder than usual, but overrun with The Elder's minions, which tend to be weird, squid-like and actively sucking the colour out of the surrounding area. Clear them all out, and the area is restored to normal, revitalising the Atlas node.

Later still, The Elder himself begins manifesting directly inside these corrupted nodes, highlighting them with a purple mark. In these locations he'll make a show of killing off what would normally be the end-of-map boss, using their soul to fuel one of his own elemental-themed guardians, leading you into a significantly longer, tougher fight. I was shown The Eradicator, which is some sort of lightning mage in a multi-tiered arena where there seems to be as much threat from the arcing tesla coils scattered around as the boss's own attacks.

The Shaper won't just be sitting around while this newcomer messes everything up and eats perfectly good boss encounters. Eventually, he'll join the fight, establishing direct control over regions of the Atlas (indicated with a starry background), filling them with his signature gimmicks previously only seen during the climactic final battle against him, such as star-filled tears in reality and exploding space-time anomalies. His influence also increases the difficulty and loot quality of the area, making it a potentially lucrative intrusion. 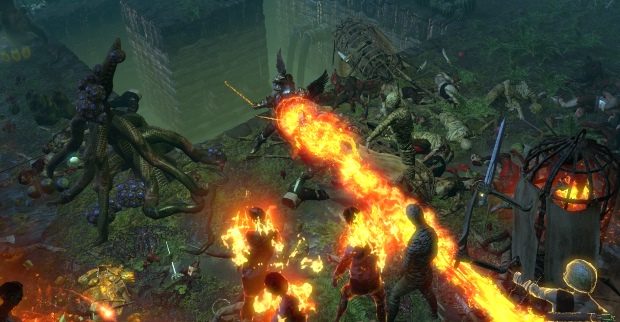 Which of these two factions wins the titular War For The Atlas will be determined largely by the player, with each sortie into a map effectively signalling the end of a turn, allowing the Elder and Shaper to make their next moves. Chris Wilson hinted that there'll be strategic reasons why you might want either faction to win the war, and that there will be multiple possible endings depending on what choices you make over the course of exploring the Atlas.

Being Path of Exile, War For The Atlas brings the usual new pile of loot and gear that you'd expect, but also a new class of equipment rarity. Elder and Shaped items can be found only in areas of the Atlas belonging to that respective faction. Functionally identical to regular Rare items, their icons have tentacley or starry animated backgrounds, and have more slots for random traits than regular gear. Shaped and Elder items may also have perks that are exclusive to their respective faction, potentially making them a valid alternative to Grinding Gear’s own hand-crafted unique items.

Not everything in War For The Atlas is for endgame players, thankfully. There will be ten new skill gems available even from relatively early levels, with an unusual focus on corpse-manipulation magic. Chris showed half of them in action, starting with the Unearth spell, a ground-moving projectile that causes a corpse (of the regular dead kind) to erupt from the ground under the target. He also showed how this synergises with the Cremation spell, which converts corpses into miniature volcanoes, dealing damage over time to a small area. 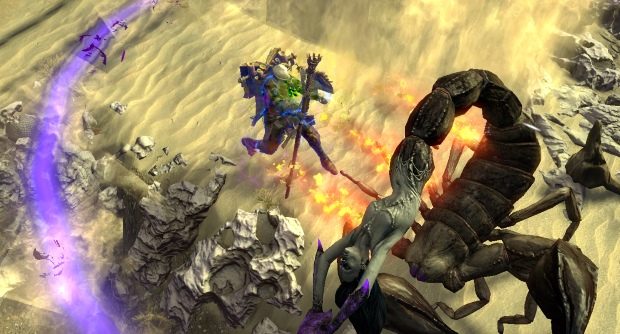 The demonstration continued with the new Body Swap skill, allowing the player to teleport into a corpse, exploding out of it in a cloud of damaging gore in classic Quake telefrag style. I was shown a clip of this being used very aggressively, with a player warping wildly between targets, each kill creating a new corpse, and a new valid location to target. Yet one more option for desecration is Volatile Dead, which converts dead bodies into huge seeking orbs of magma, similar to the Volatile perk that some monsters have. On a less corpse-mangling note, a new support gem called Spell Cascade looks fun to use. It amplifies ground-targeted AoE skills, casting them in triplicate; once at the target point, once in front of it and once behind it.

Also launching alongside the expansion is the Abyss league, the latest in Path of Exile's (roughly) quarterly seasonal events. Similar to the previously popular Breach league, you'll find strange fissures scattered throughout the world, packed to the gills with horrible undead monsters. Kill them fast enough and a crack will spread out from it, leading you to another fissure full of even nastier monsters, escalating until the encounter times out or something too big to handle emerges from the ground and forces you out of the running. You'll want to at least give it a try, as higher-tier Abyss monsters have a chance of dropping Abyss Jewels that allow you to further customise your characters and items.

The War For The Atlas expansion will be released on December 8th. As with all previous Path of Exile expansions, it will be completely free, although likely accompanied by a slew of expansion-themed cosmetic items in the premium store for the adventurer that loves to accessorise.