In The Fall of Oriath, you went to war with the gods themselves. In the Abyss, you fought ancient undead, led by a nameless lich-king and in the War For The Atlas, you set your sights on two almighty beings that create and destroy entire worlds on a whim. Now, Path of Exile's next league challenges you to... open a zoo? Well, that's a bit different.

While not quite as ambitious as the expansions preceding it, the Bestiary league (due March 2nd) for Path of Exile looks to add a lot more flavour and tangential content to the popular free-to-play action RPG, designed to be accessible to all players from total beginners right up to endgame grind-fiends.

The heart of this new league (which should run for three months, give or take) is the Menagerie, your very own monster zoo. Early on, you'll meet Einhar, a new NPC who will give you the keys to this place and a copy of the Bestiary, an automatically updated checklist of 250 types of animal and 40 Legendary Beasts scattered around Wraeclast. By weakening the head of a pack of animals, you make it vulnerable to being captured, Pokemon-style. If successful, it's picked up by Einhar, who drags it off through a portal to your (fully explorable) monster-zoo. Legendary Beasts are new boss-class fights and require significantly more effort to capture, of course, but will be required for the next part of the equation.

This being Path of Exile, you're not collecting animals for preservation or the advancement of science. You're not even doing it for easy tourism bucks. Attached to your menagerie is an arena pit with a blood-stained altar in the center, used in the second new mechanic: Beastcrafting. By sacrificing certain combinations of animals and then jumping into the pit to fight them all simultaneously, you can complete blood rituals in order to do new types of item crafting. Certain high-level Beastcrafting recipes (presumably involving Legendary Beasts) can open up portals to some beastly multi-stage boss instances which drop new unique gear sets.

If you are pointedly disinterested in any and all animal antics, the update accompanying the Bestiary league is bringing a handful of unrelated additions, including a trio of new skill gems, most enticing (for me, at least) being a summoning-type support gem that spawns phantom minions just by killing stuff. They're also expanding on the Destiny-like system whereby you can re-forge certain lower-level unique items into higher-level forms with new perks by completing specific Prophecy quests. Another 30 uniques can be upgraded this way now. 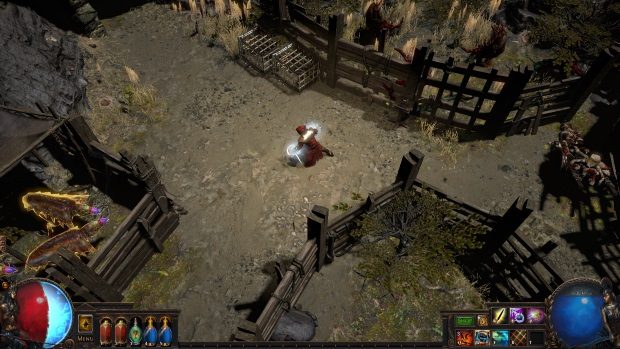 While the Bestiary league is primarily aimed at normal human beings, sterner players will find a few new animal-themed bosses in the endgame. For the absolutely hardcore, the Atlas story arc is being capped off with one final challenge: A tag-team throwdown against the Shaper and the Elder simultaneously, both gods amped up to their highest level forms. While chatting with Grinding Gear head Chris Wilson about this update, he admitted that not a single QA tester had survived the fight without cheating. I believe him.

As for the Abyss league, player response to it was so positive that Grinding Gear will be integrating its undead-filled chasms into the main game starting around Act 6. Fitting, given that's around the point in the story where you've gone and triggered the apocalypse. While Grinding Gear aren't entirely sure what will happen with the Bestiary content after its three-month tenure, they're looking to integrate it into the core relatively early on if possible, as its content spans the entire length of the game.

Path of Exile's Bestiary league will begin on March 2nd. You'll have to roll a new character if you want to start your own zoo, but at least everyone involved will be starting out on equal footing. The game and its expansions remain completely free, supported through the sale of cosmetic item skins and some quality-of-life perks for dedicated loot-hoarders.