There's no denying the Nvidia GeForce GTX 1660 is a great graphics card for £200 / $220. Offering 60fps speeds at High or maximum settings at 1080p, and Medium to High at 1440p, it's effectively replaced the 6GB GTX 1060 as my new best graphics card of choice for budget-conscious buyers. In terms of overall value, however, it faces stiff competition from the equally nippy AMD Radeon RX 590, which is a fraction more expensive than the GTX 1660 but currently comes with three free games to help sweeten the deal. As a result, those looking to simply upgrade their graphics card will almost certainly be able to make their money go further with the RX 590 than the GTX 1660.

If you're looking to buy a whole new PC, however, then GTX 1660 machines such as the Apollo R1 from UK system builder PC Specialist may just have the upper hand again. Priced at just £699 with a Ryzen 5 2600 CPU and 8GB of RAM inside it, that's a whole £150 less than PC Specialist's otherwise identically-specced RX 590 offering. Yes, you can still offset some of that cost by taking into account the free copies of DMC 5, Resident Evil 2 and The Division 2 you'll get with the RX 590 PC, but £853 is still quite a big chunk of change to spend all at once. So if you're on the look-out for a reasonably-priced machine and simply can't face the idea of building a PC yourself, then the Apollo R1 is a great place to start. Let's take a look.

For starters, this is definitely a better use of £699 than Overclockers UK's now similarly-priced Kinetic Z1 system that I reviewed at the end of last year, as that only comes with a quad-core Intel Core i3-8100 processor, 8GB of RAM and an Nvidia GeForce GTX 1050 Ti graphics card for the same amount of money.

The Apollo R1, on the other hand, has AMD's excellent six-core Ryzen 5 2600 processor under its belt, giving it a lot more oomph when it comes to general desktop duties as well as more demanding tasks such as photo and video editing. In Cinebench R15, for example, its single core result of 158 was 9% faster than the Core i3, while its multi-core score of 1279 was a whopping 118% faster, making it much better equipped to deal with whatever you plan to throw it at both now and in a couple of years time. 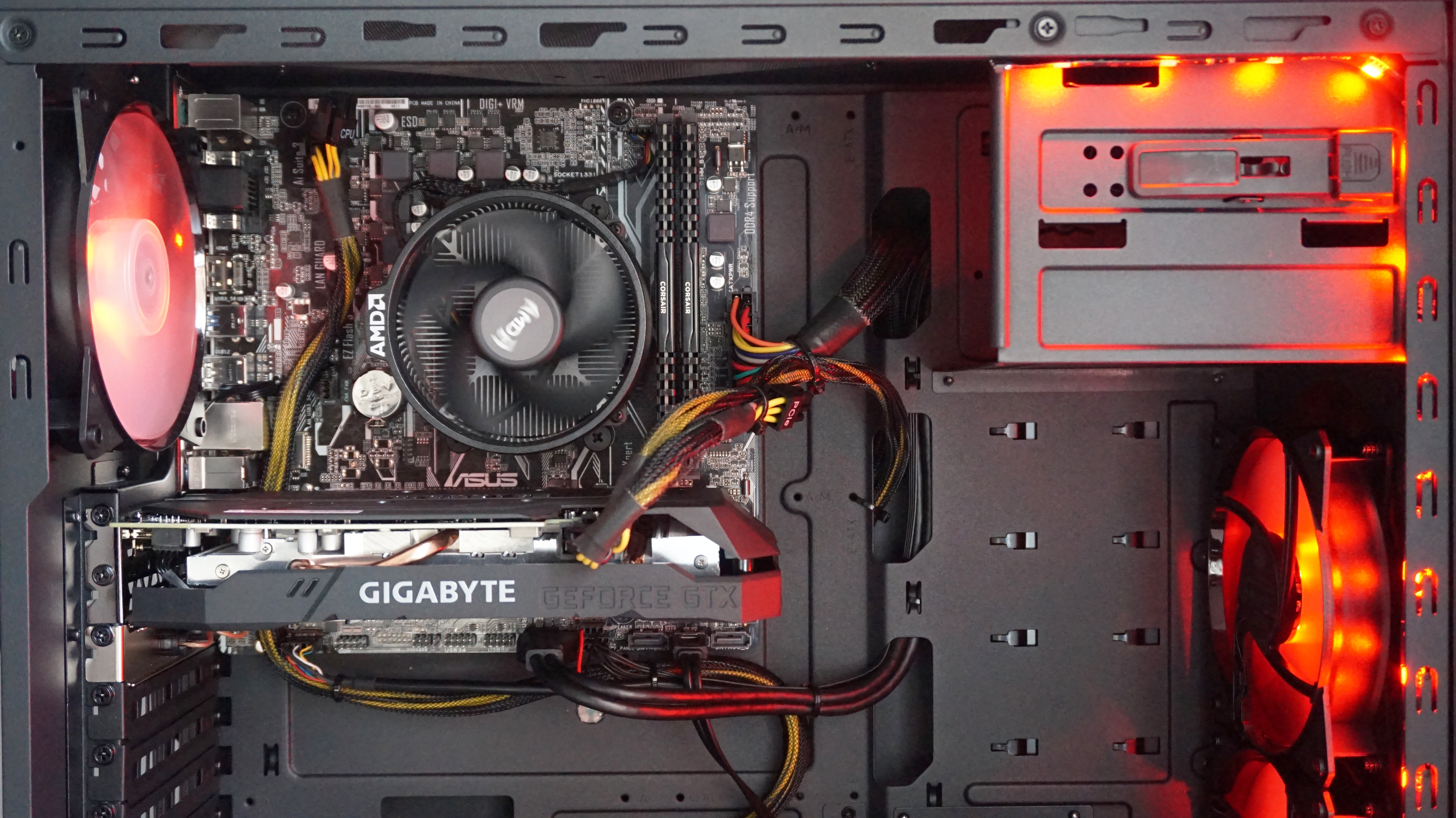 The Ryzen 5 2600 is also an excellent companion for the Apollo R1's Gigabyte GeForce GTX 1660 graphics card as well, with the pair of them putting in almost as good a performance as my own Intel Core i5-8600K system. On average, the Apollo R1 was only a couple of frames behind my Core i5 gaming results (and only 4-5fps at the very most), so I'm pretty confident you'll be able to apply the same speeds I've detailed in my GTX 1660 review to what you'll get here.

In short, the Apollo R1 is an excellent 1920x1080 gaming machine, offering between 50-60fps at 1080p on maximum quality settings in a range of today's big blockbusters, from Shadow of the Tomb Raider and Monster Hunter: World to The Witcher III and Total War: Warhammer II. It's also easily capable of hitting going well above 60fps when gaming on High quality settings, too, making everything from Final Fantasy XV to Assassin's Creed Odyssey an absolute breeze to run.

It's also capable of taking a decent stab at 2560x1440 gaming, too. Those after 60fps will find it's most comfortable on Medium to High quality settings at this resolution, but that's still pretty impressive for a £700 system - and certainly a damned sight better than what the Kinetic Z1 can manage with just a GTX 1050 Ti. 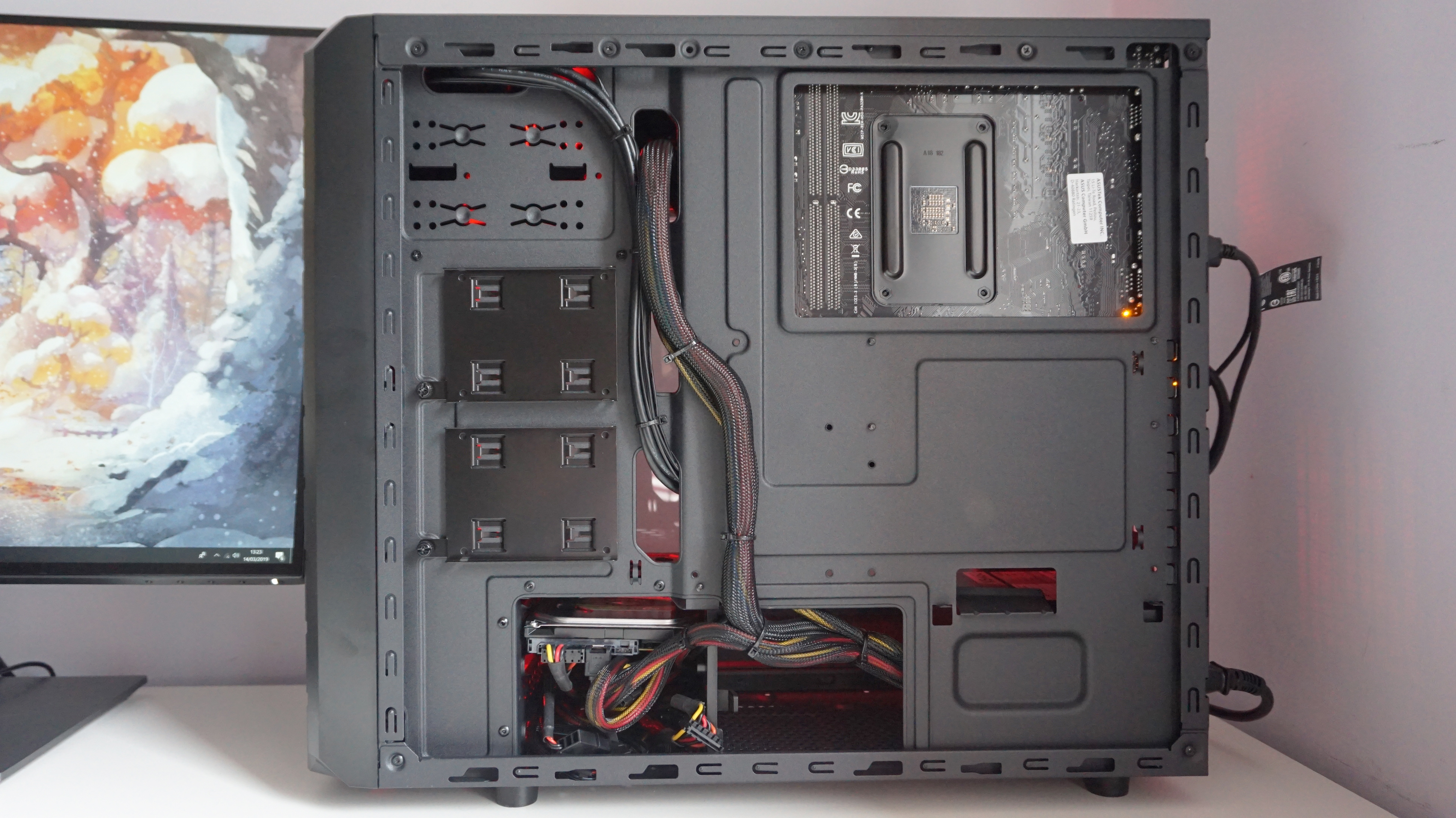 You also get more storage with the Apollo R1, too. Instead of settling for a 1TB SSHD hybrid drive in the Kinetic Z1, for example, you get a proper 256GB Adata SU800 NVMe SSD here (which is nestled neatly behind its GTX 1660 graphics card, in case you were wondering where it was in the pictures), plus a 1TB Seagate Barracuda HDD.

Admittedly, the Adata SU800 isn't the nippiest NVMe SSD on the planet. In fact, its random read and write speeds of 28.9MB/s and 83.7MB/s respectively in AS SSD's 1GB 4K random test put it more in line with what you'd get on a regular 2.5in SATA III SSD such as the Crucial BX300. Still, at least it keeps things neat and tidy inside the PC and cuts down on the number of wires coming out of its Asus Prime A320M-K motherboard.

Speaking of which, the fact the Apollo R1 only has an A320-based motherboard (which is the most basic and entry-level chipset you can get for AMD AM4 mobos) does means it isn't particularly jam-packed with extra features, such as fancy USB-C ports round the back or AMD Crossfire / Nvidia SLI support - not that the latter is even physically possible on this particular board, of course, due to its titchy micro-ATX form factor.

To be honest, I wouldn't expect such things on an entry-level PC like this - although a bit of extra room for future expansion might have been nice. Still, I'm sure most people will be perfectly happy with the Apollo R1's six-rear USB ports (four of which are USB3), two front-facing USB3 ports and assortment of microphone / headphone / audio line in jacks, plus, there's still room for one PCIe card in there as long as you don't mind swapping out its bundled 802.11n wireless card and using a wired Ethernet connection instead.

I'm also a big fan of the Apollo R1's case. It's PC Specialist's own Cyclone design, but you get three fans with it (two at the front, one at the back), plus red LED lighting and a plastic windowed side panel. It's not quite as classy as the tempered glass side panel on the Kinetic Z1, all told, but it still looks pretty smart and offers bundles of room to build in if you fancy trying your hand at upgrading it in the future. 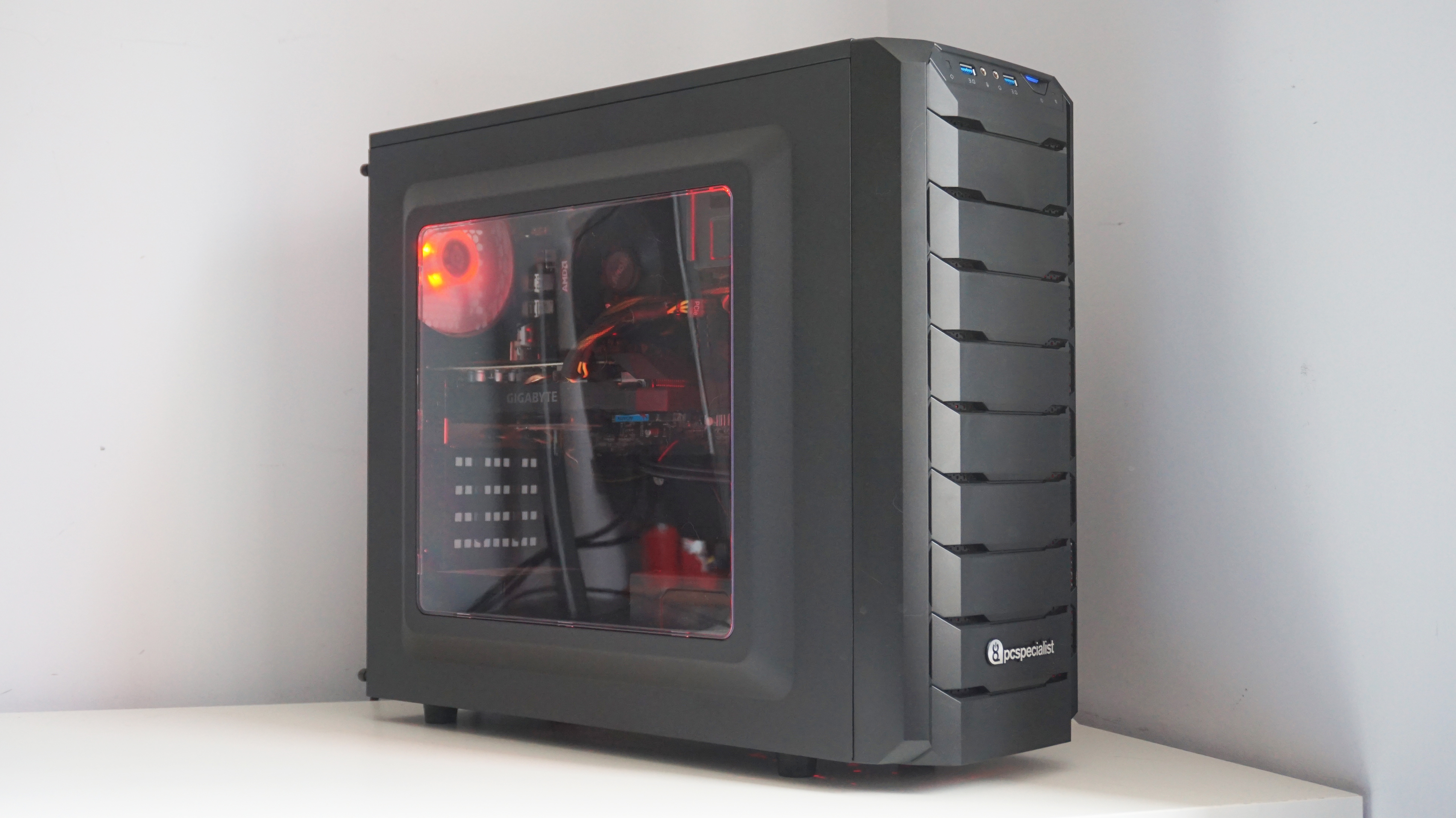 Admittedly, I did have to ease the side panel back into position when I got it out of the box, as some of the metal clasps had come loose in transit. But it was an easy fix that took all of two minutes to rectify. PC Specialist's cable routing was also incredibly neat and tidy, and there's space for adding more two 2.5in hard drives as well as mounting two 2.5in SSDs behind the motherboard once you remove the back panel. The only extra thing you'll need to buy are additional SATA cables to connect them to your motherboard, as PC Specialist have tucked all the extra power cables you'll need down underneath its main HDD - which is great considering its Corsair 450W VS-450 PSU is a non-modular power supply that doesn't let you add any additional cables.

All in all, the PC Specialist Apollo R1 is a fantastic GTX 1660 system that offers plenty of power and flexibility without breaking the bank. It's definitely better value than Overclockers UK's Kinetic Z1 system, and I think you'd be hard-pushed to find another pre-built system this fast for less. Some may still prefer to opt for PC Specialist's more expensive RX 590 system while AMD's three free games deal is still running (which also seems to be at least £100 less than other UK system builders I've tried spec-ing up), but for those looking to keep costs down as much as possible, the £699 Apollo R1 comes highly recommended.