I know there are deer nearby, because the helpful disembodied voice told me, and I have complete trust in the disembodied voice. theHunter: Call of the Wild, which launched in 2017 but has since been scooped up along with its DLC and repackaged as the 2019 Edition, contains a multitude of deer, I am promised, along with all kinds of woodland and savanna critters. All I can see are birds, however, and they are mocking me.

Not having played Call of the Wild before, I’m not au fait with the ins and outs of tracking animals. I wander aimlessly, traipsing through the undergrowth in this striking German forest, completely alone aside from the raucous avian chorus that accompanies me everywhere. At first the sounds of nature are welcome, soothing even, but as I move deeper into the forest, still no closer to spotting my first deer, it starts to grate.

I should listen out for animal calls, I’m informed, but it’s impossible to hear anything over the hoots and chirps. Are they laughing at me, I wonder, or perhaps they’re working with the deer? If only they knew that my gun’s an ornament and I really just want to take lovely photos of trees and animals. I’m getting plenty of the former. 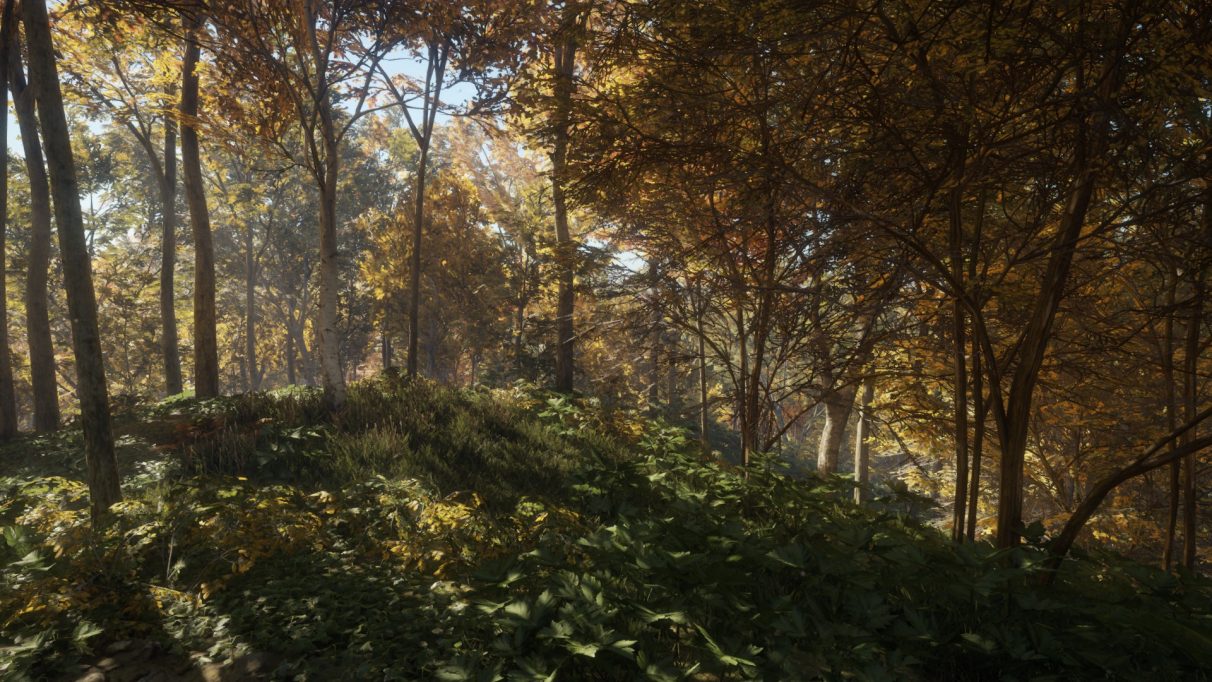 There are certainly worse places to not find deer. Just as I’m getting into my nature trek, I finally hear it. A deep bellow erupts, which the HUD (and my ears) informs me is coming from the trees right in front of me. The specific type of deer it belongs is a “classic animal to hunt,” the disembodied voice explains, which is a nice way to say that it’s constantly being shot. Not by me, of course, even if I wanted to.

Once again I’m confronted with more trees, just trees, and as lovely as they are, they’re not going to get me on the cover of Pictures of Nature Monthly or any of the other equally prestigious nature mags that exist solely in my head. I do find some tracks at least! Wee hoof marks in the mud, glowing to get my attention. I follow them for a long time until I hear another call right ahead of me. I don’t rush. Unfortunately, I’m a big galoot, and the deer scarpers when I step on some crunchy twigs. I don’t see this happen, mind, as I’ve not seen hide nor hair of a single deer, but Call of the Wild wants to make it very clear that I’ve messed up yet again. 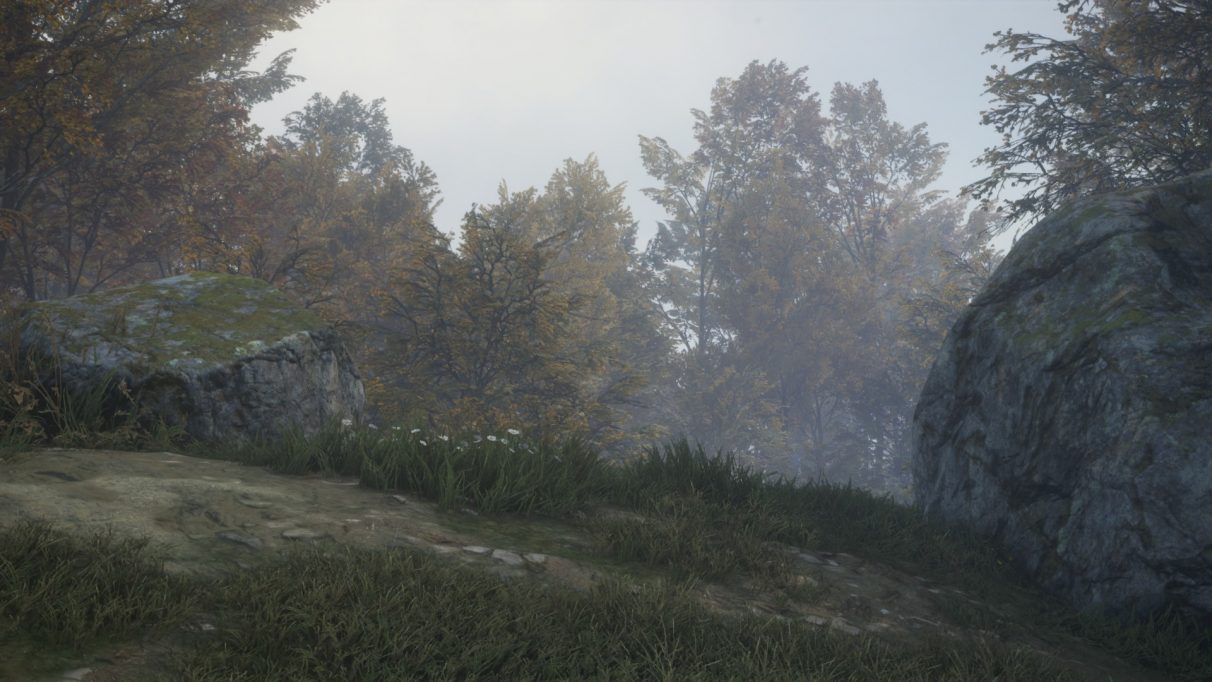 I keep passing other tracks, too, but I’ve invested far too much time stalking this particular deer to give up now. The weather has turned, so I’m no longer enjoying a sunny walk; instead, I’m peering through the mist and wondering if I’ll eventually need a torch. The next call is close, though, and I’m now in the deer’s feeding ground. It’ll be chilling and grazing and trying to get lucky. This time I’m taking no chances, so I drop to the ground and start crawling. It’s not dignified, but needs must. Moss moves faster than my crawl speed, lamentably, and when I arrive at the spot where I expected to find a deer, I find only its horrible calling card. 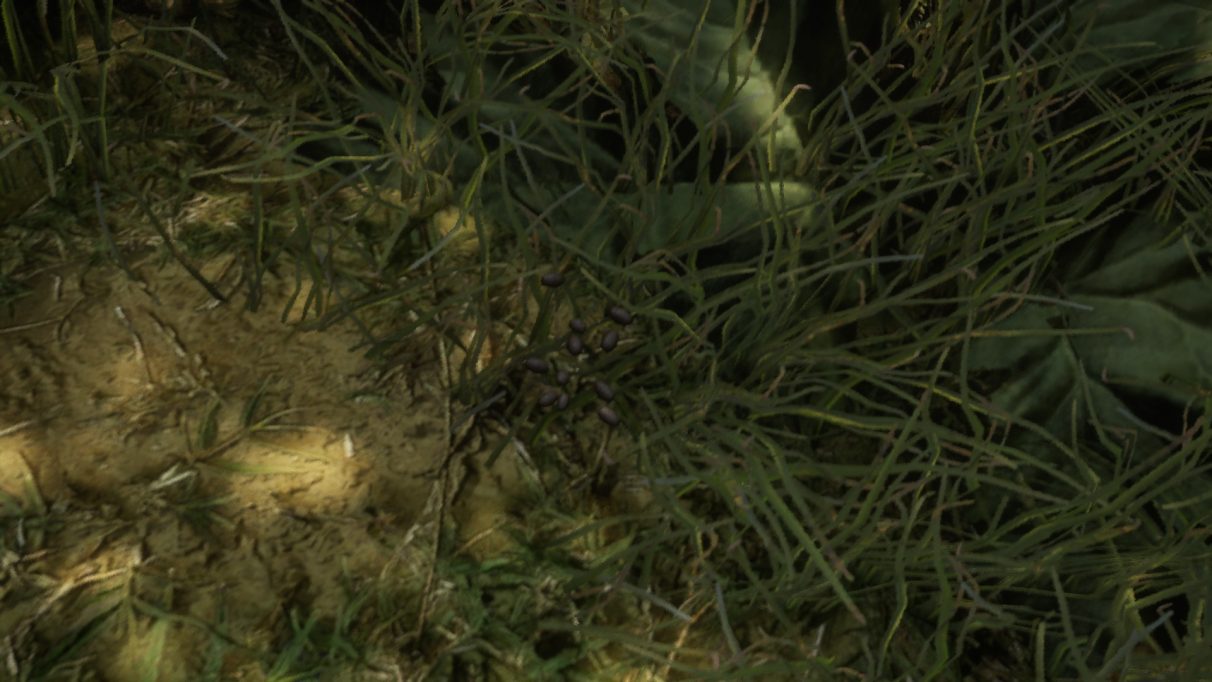 Very dispiriting! The tiny poop pellets are fresh, however, and there are more tracks nearby; against my better judgment, the hunt continues. That’s when the storm begins. 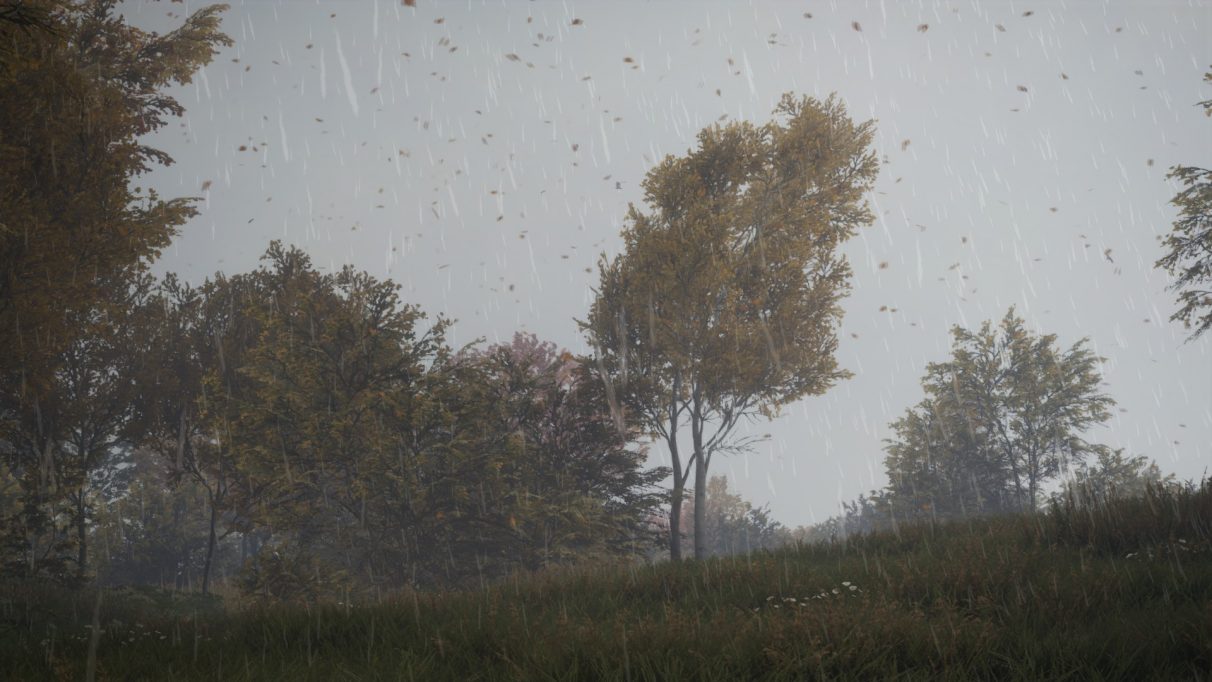 It dawns on me, as I’m marching through this increasingly miserable forest, that I live in Scotland, a country where I can go out into the pouring rain and stare at deer shit whenever I want. I deserve a proper holiday. Thankfully, Call of the Wild comes with four distinct parks, spread out across the world. I bid farewell to damp Germany and hop on a flight south to the the African nature reserve of Vurhonga Savanna. The moment I arrive, my important destiny is revealed. The park has been plagued by poachers, killing off all the lions and elephants (the two things I was very eager to shoot with my camera), but I, the adopted prodigal grandson of the current senior warden, have returned to save the park using the knowledge I have amassed from my time travelling the world.

Sounds heavy. I go off to find some wildebeests. 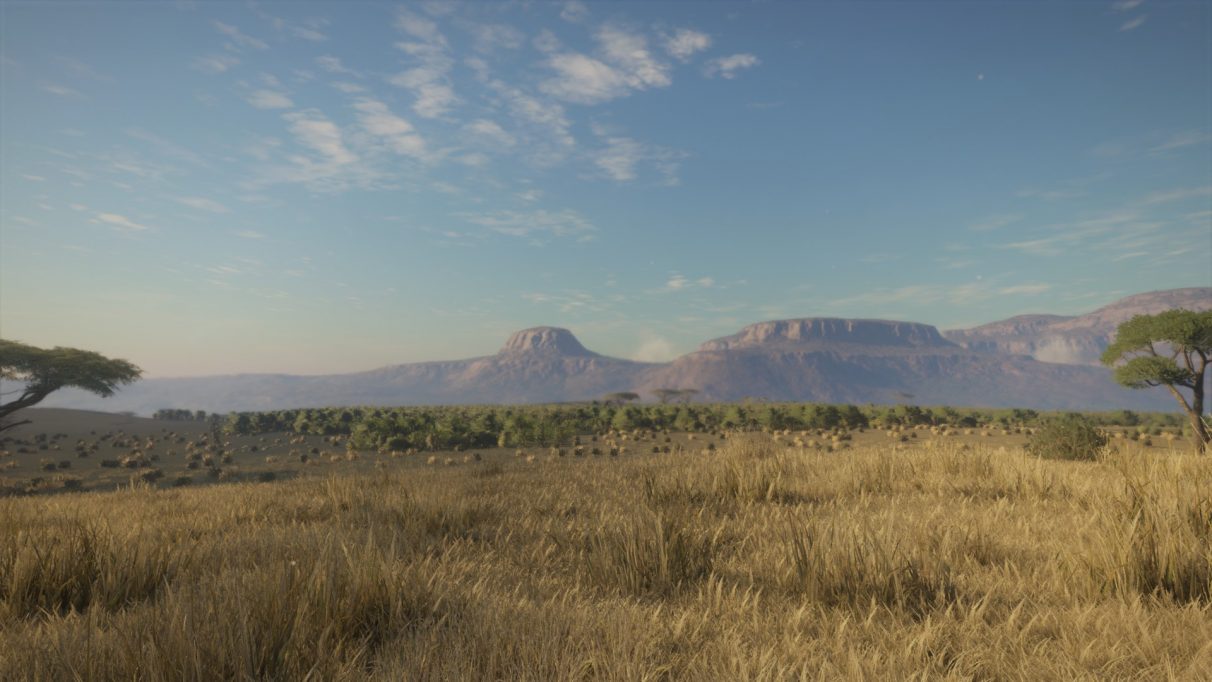 My first sighting is actually of a springbok, a little antelope, who crests a hill, spots me immediately and then flees. I run right after it, up a hill and into the woods, where I promptly get lost. The tracks aren’t proving helpful; if anything, they’re making it harder to find the wee critter. See, each set of tracks is accompanied by a cone that denotes the direction the animal was heading in, but this springbok is either drunk or an expert in shaking a tail, spinning around, doubling back and sending me off in the opposite direction. 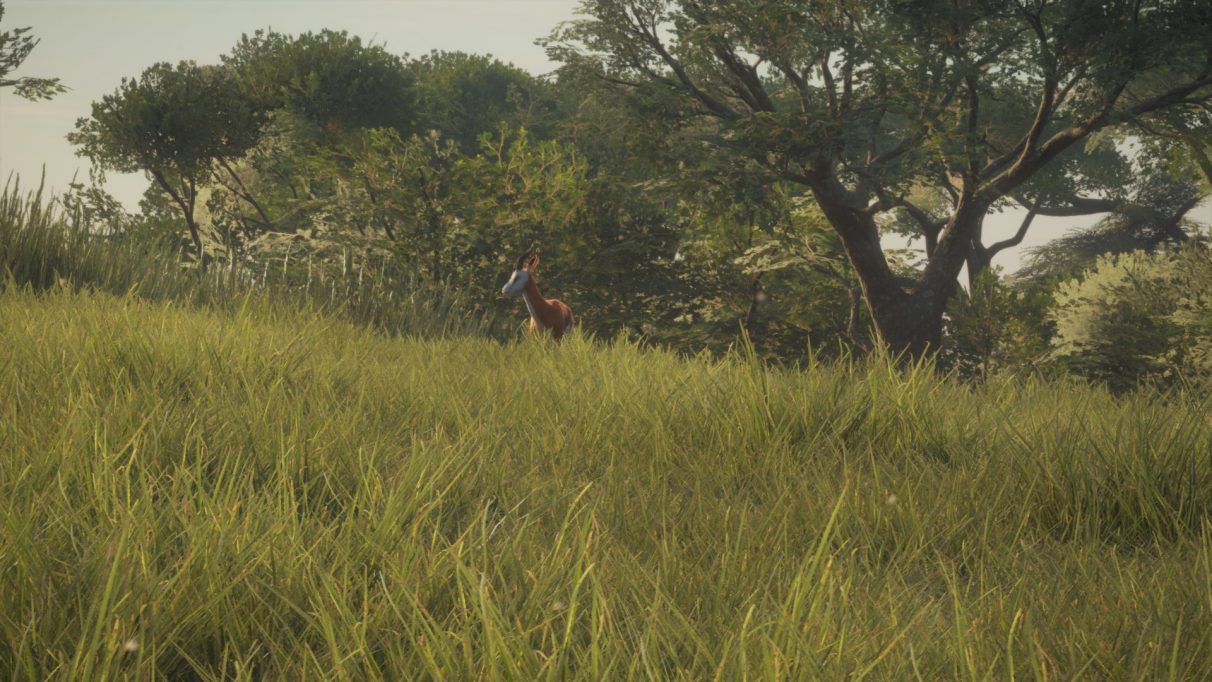 It’s while I’m being outsmarted by the springbok that I come across a giant pile of poo. A pile of poo you could be proud to leave. It belongs to a wildebeest, so I give up on the springbok and start to look for new tracks. I find dozens of them, surrounded by a sea of trampled grass. It’s a herd, and they’ve only just left. I’ve watched enough nature documentaries to know that wildebeest herds are massive, loud, kinda obvious things, so my camera’s finally going to get some action. 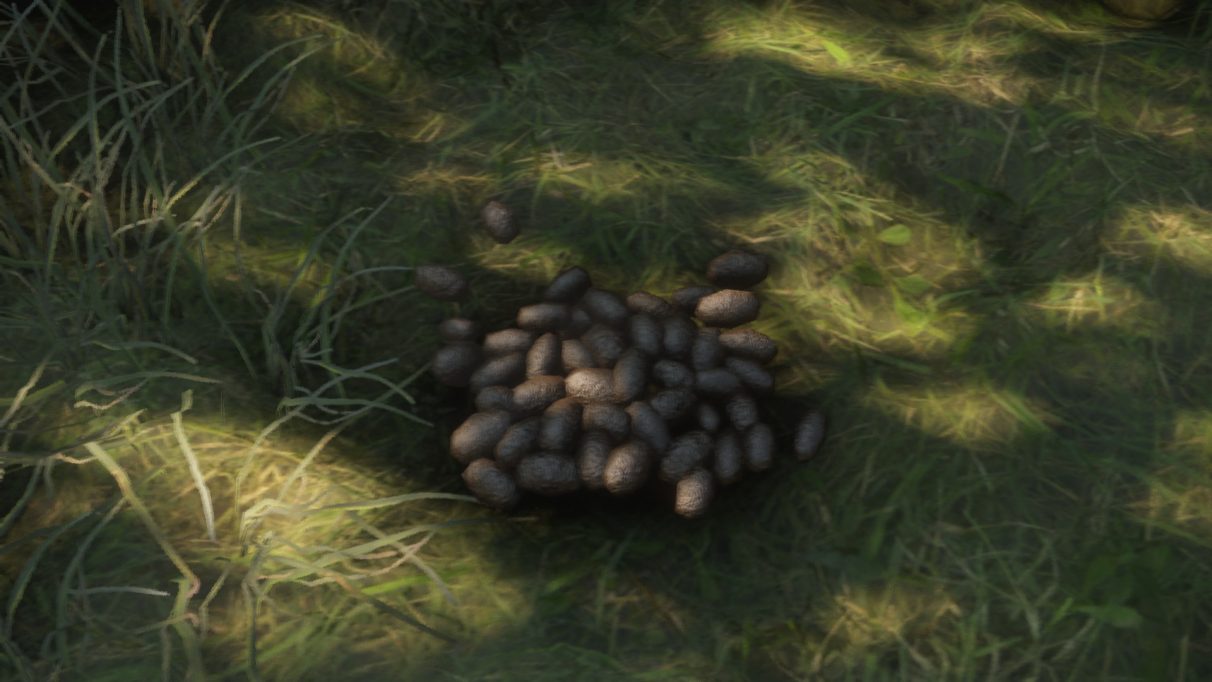 After about ten minutes, I start to remember that most of those shots of wildebeest on the telly are taken from the sky, and down here with the trees and tall grass, it’s incredibly difficult to spot anything. Following them is easy, but they’re always just ahead of me, just out of sight. I try to be patient, hoping to sneak up on them before they move on, but something always goes wrong. Maybe Attenborough could lend me a drone?

Occasionally I hear the thunderous rumbling of countless hooves, and I eventually get to witness the tail end of the herd rushing into the shadows of the forest. It’s not going to get on any magazine covers, but look, those are definitely wildebeests. 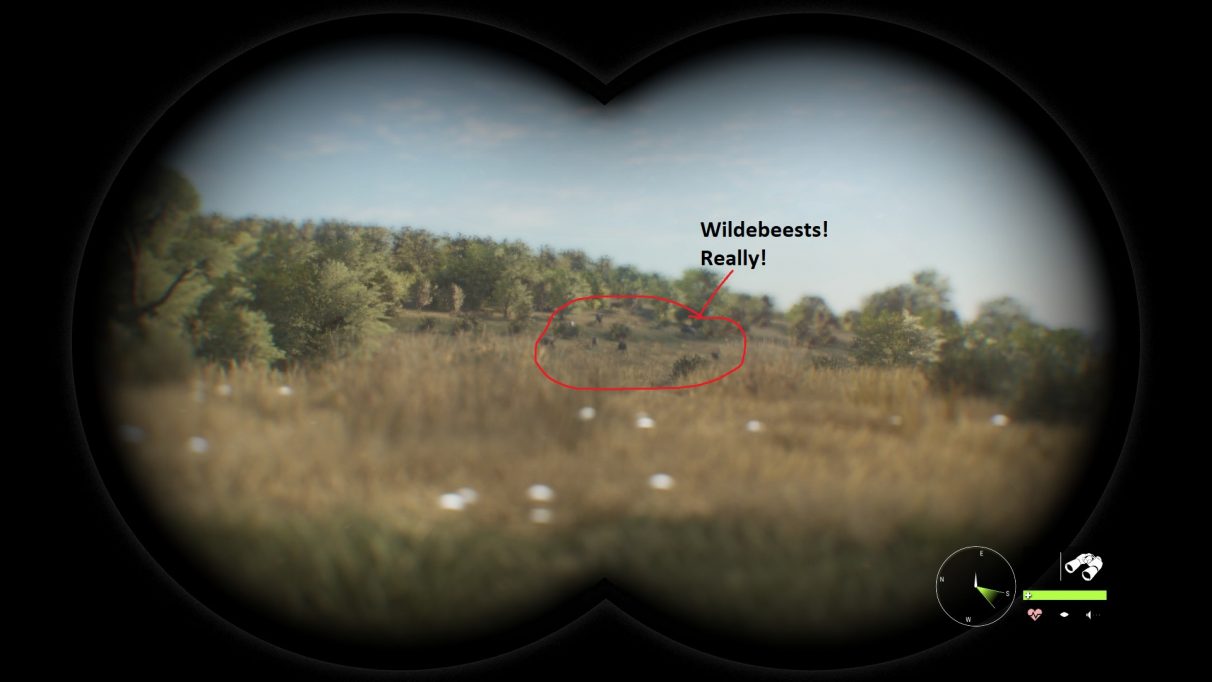 That actual glimpse of them gets me all fired up, and I convince myself that I’ll be able to get closer next time. I’m kidding myself, of course. Somewhere in the forest, I lose their tracks completely. A whole herd, vanished into the ether. It’s not my proudest moment. On the other side of the trees, there’s a gorgeous vista, one of those views that makes you put your hands on your hips and let out a satisfied sigh, which almost makes up for being outsmarted yet again. I’m still not really feeling my destiny, I’ve got to be honest. Hopefully the senior warden can adopt someone else who's better at this whole hunting malarky. 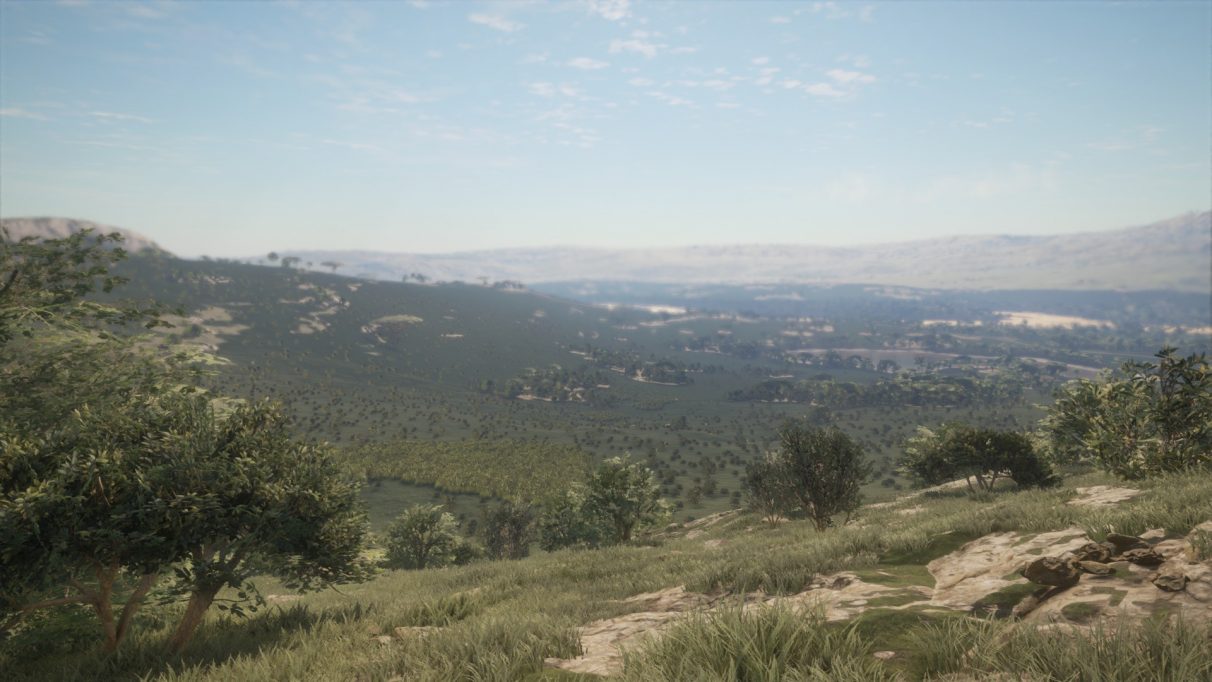 In a last-ditch attempt to maybe see some animals, I head to Siberia. Medved-Taiga National Park is a meant to have bears, so that’s exciting! The moment I set foot in the park, I’m swamped by deer, moose, reindeer and even a lynx. It’s bizarre, like standing in the middle of a zoo escape, and none of the animals seem to have noticed me, yet. I’m a bit dumbstruck by it all and only remember to take some snaps when they finally decide to shoot off in different directions.

A deer, at least! 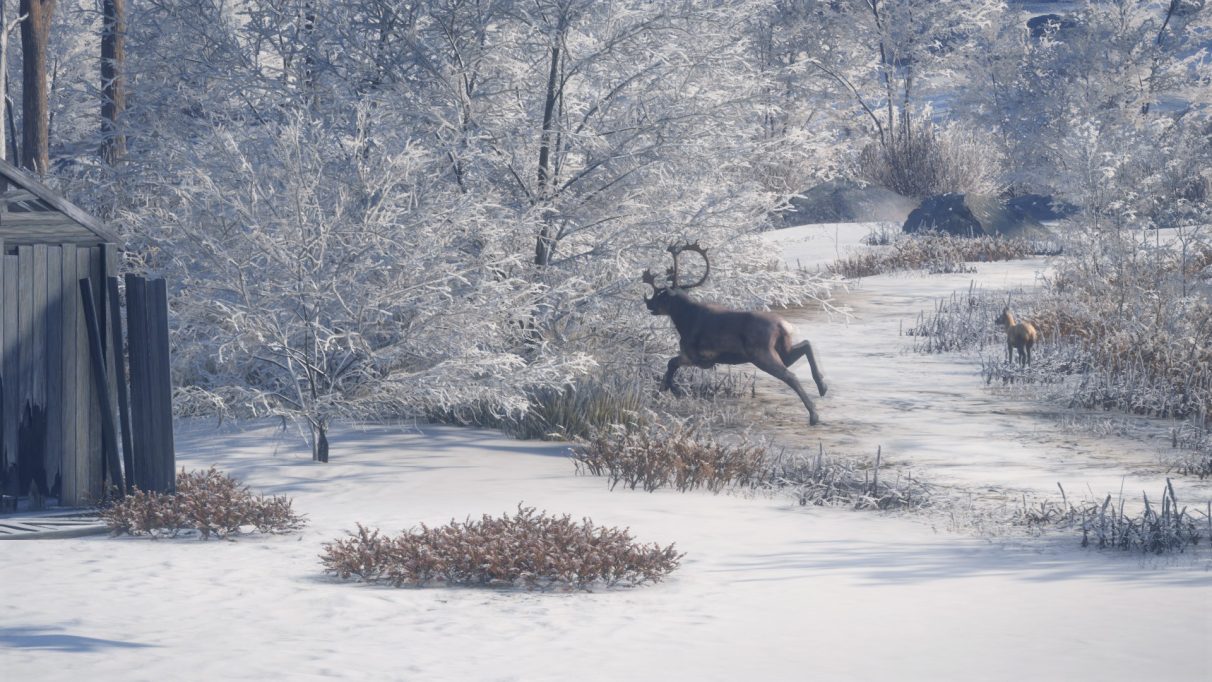 Instead of chasing them - I've learned my lesson - I find the nearest lookout tower and get the lay of the land. According to the icons that flare up on my map, I'm surrounded by tracks and points of interest, and I can even see some grazing moose off in the distance. You can't go wrong with a moose. It's fun to say, they're funny to look at and the chocolate ones make a great dessert. I go in for a closer look.

Now, this time I'm being very cautious. See all this forest trash on the ground? I won't be stepping on that. Not today, twigs! 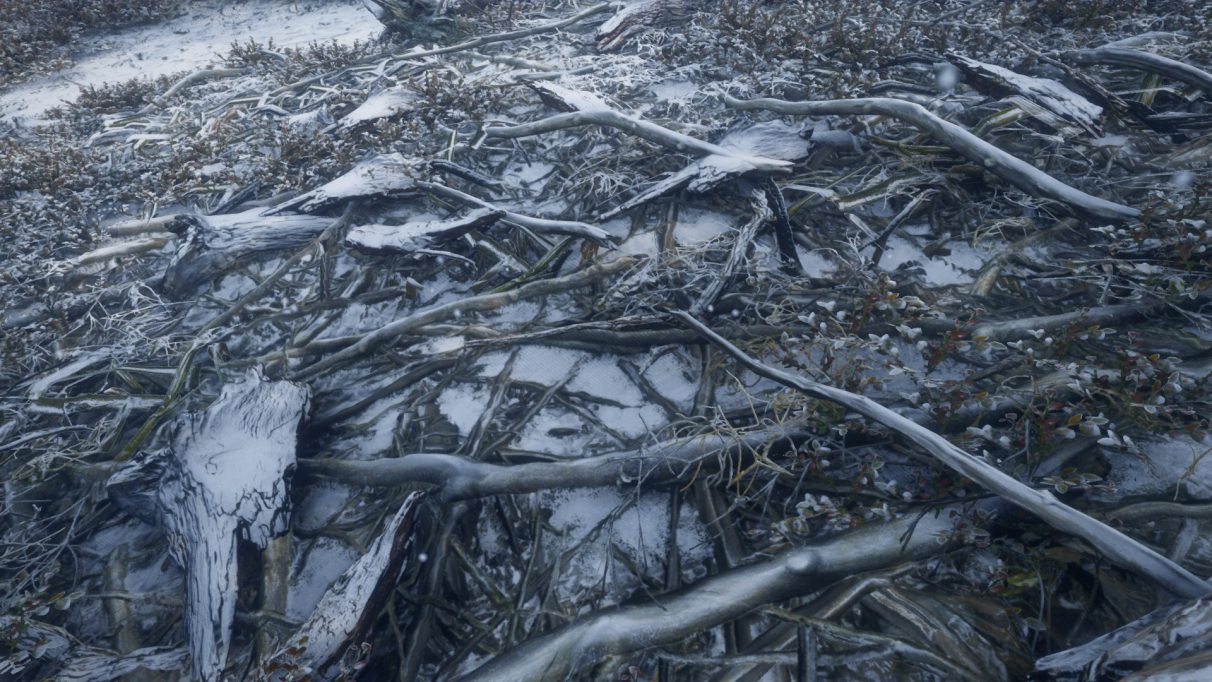 I find one moose enjoying a meal by a tree and, weaving between rocks and bushes, manage to get close without disturbing it. Finally! And just as I'm taking my shot, it flashes me a goofy grin and then gets back to chewing. What a star. I'm going to put it up on the fridge, probably. 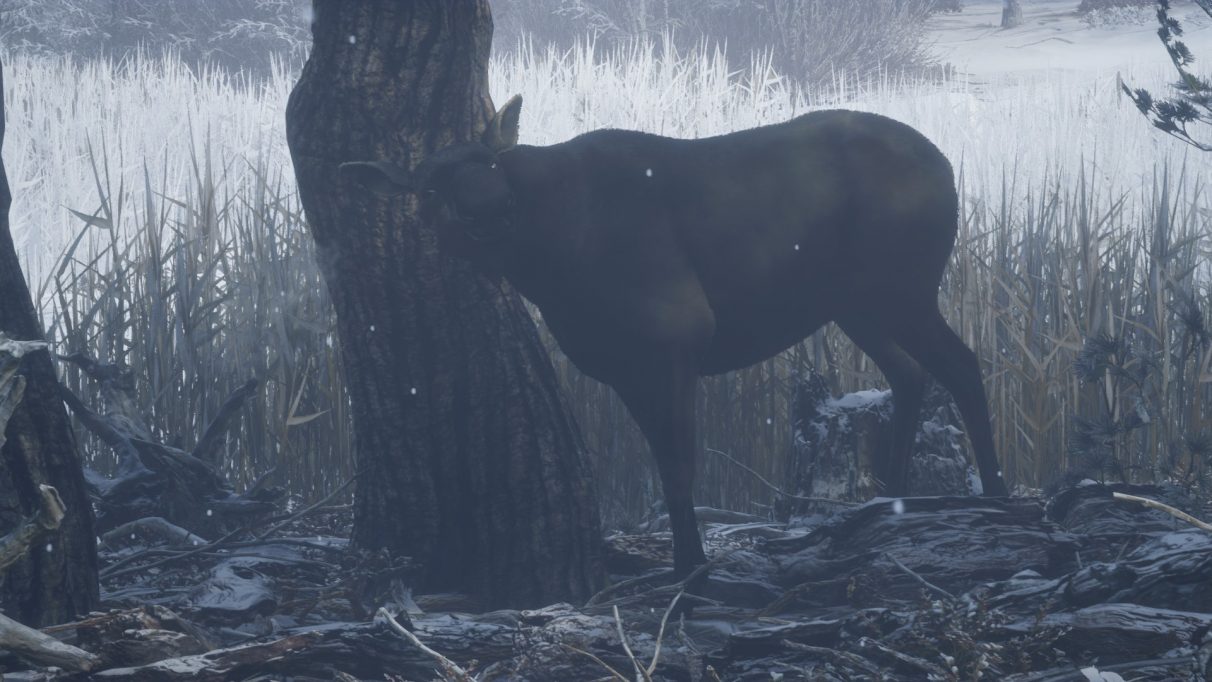 It feels like an achievement. There are definitely animals in theHunter: Call of the Wild, and I've got the proof right here. It's like discovering Bigfoot. But where can I go from here? I've tracked the moose, found the moose, photographed the moose - what's the next step? 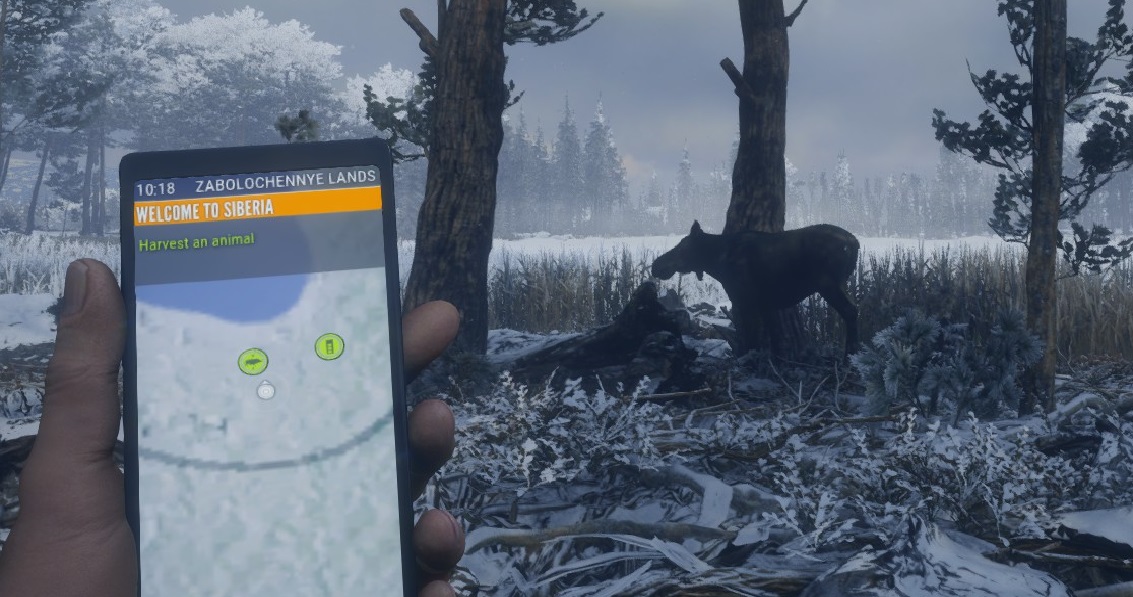