Every week we abandon Brendan on an early access space rock to test his resolve. This time, the janky, comedy physics of Planetoid Pioneers [official site]

My robot head is jammed in a gate. I idled too long by a giant steel door while considering my route through the tunnels, and now the door has closed automatically. My bonce is firmly trapped against the ground as if by a giant mechanical boot. By the time I wriggle free, my bot-body will be all scratched and scraped. I’d like to say it’s the worst thing to happen during my time with Planetoid Pioneers but this isn’t the only ignominy I’ve suffered in my exploration of the physics-based platformer. I’ve been roasted alive, crushed by a boulder, trapped under an elevator, gunned to shreds by turrets, and completely de-limbed by other robots. But I’ve also giggled quite a lot.

To describe it simply, this is a physics-based Metroidvania where you can gobble up objects with an atomiser and spawn new items with the same device. You traverse the caverns and surface of circular planetoids by hoovering up material and using it to build a solution to whatever impasse you’ve encountered. For example, if I evaporate these wooden struts, then I’ll have enough carbon to materialise some planks to form a bridge over this gap. But oh no, those struts were holding up a part of the tunnel and now it is raining rocks on my head.

To put it another way, it’s about getting from A to B while being a clumsy crash test dummy who can barely control his own flailing limbs. When I say “physics-based” I don’t mean “it’s like Limbo”. I mean “not a single twitch or shuffle will go unseen by this wobbly, Caligulan physics engine”. Your body is completely enthralled to the gravity of this world. Far from feeling responsive or weighty, it’s the comedy keystone upon which the whole thing is shakily reliant. Some people will doubtless despise the controls – they are undeniably cranky, erratic, and unreliable – but for those who enjoy the botched athleticism of QWOP and GIRP (or those who glimpsed the studio’s previous game, the chaotic warfare of Cortex Command) it’s some fine slapstick. I can’t help but find even the simplest animations funny. Just look at this wee man trying to run up the stairs.

Your greater purpose is to build a spaceship and escape the rock you’re currently stranded on. You don’t know how to assemble all objects straight away, so you need to atomise a few of each type first before the blueprints stick in your head. Much of the adventure is therefore about finding new objects and dissolving them. There are planks, boxes, grates, weapons, mine carts, buggies, spinning cogs, lamps, turrets, and all sorts of bigger gizmos I haven’t yet learned how to make. Enemy robots, for instance, can be atomised once they’ve been turned to scrap with a few rifle bullets. At one point I encountered a giant snake-like bot whose sole purpose was to travel back and forth pushing debris into a corner, like a terrifying Roomba. I shot it in the head many times. 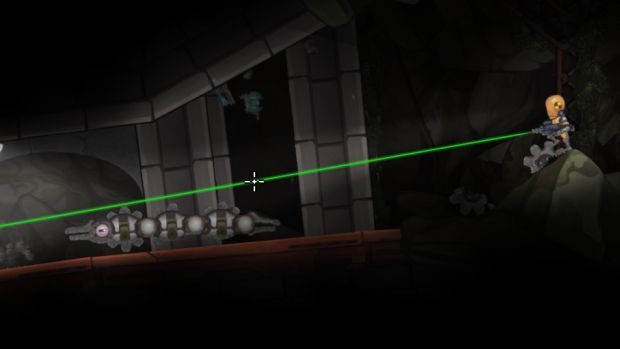 It’s quite a big map (the starter planet is anyway) and you can zoom in and out at will to see all the parts you've unveiled. It's got all your requisite environments. Slimey cave, rocket silo, industrial mine, ancient temple, icy mountain, lava core (although some of these are still under construction by the looks of things). Here’s a map from developers Data Realms which shows you how the first big rock is laid out. 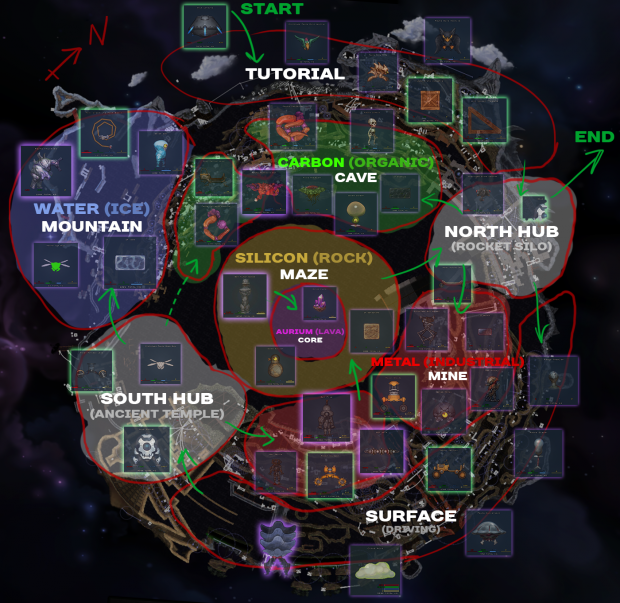 Yet, as fun as it is to fall down a pit and land on my bottom beside an angry robot with more legs than your average newt, there is some developmental roughness to the whole shebang. One of the strangest examples being the lack of any pause menu. For some reason, the developers have mapped the “restart life” function to the start button (or the escape key).

There’s something masochistic about taking the button that has become universally accepted as the pause function and turning it into the “kill me stone dead” function. If you need to go for a slash and hit pause, for example, you’ll die and restart from the last checkpoint (these are black pillars which save your game with a green blink of a light). Or, as happened to me, you’ll just respawn at the very start of the level, utterly confused, because the first checkpoint is a long way from the game’s opening. It’s one thing to omit a pause menu, but it’s a truly baffling decision to make that instinct-imbued button do something so inconvenient and abrupt. 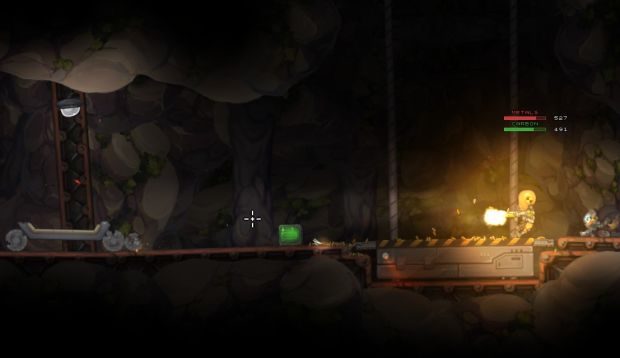 On top of that, there are framerate drops and other problems of a nature both chuggy and buggy. I noticed an increased slowdown the more I explored and revealed of the planet. Physics-heavy games tend to suffer from this and Planetoid Pioneers isn't the worst I've seen, but when the hopping, tumbling and traipsing of the character is so adorable it’s disappointing to feel like your space dummy is grinding to a halt, not because you ran him head-first into a stone wall, but because the game itself is stuttering. 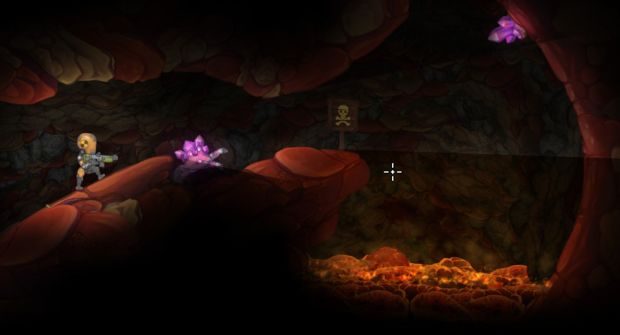 But ignoring those problems, this is a lovably frustrating game. There’s an underappreciated skill, I think, in creating a playable character who is both unreliable yet somehow likeable. Anyone who was graced by the joy of TerRover on PlayStation might feel the same, or anyone with a fondness for certain octopus fathers. The un-controlability - it could be a word - of your dummy protagonists isn’t as pronounced as that but it’s enough to make me smile nonetheless. 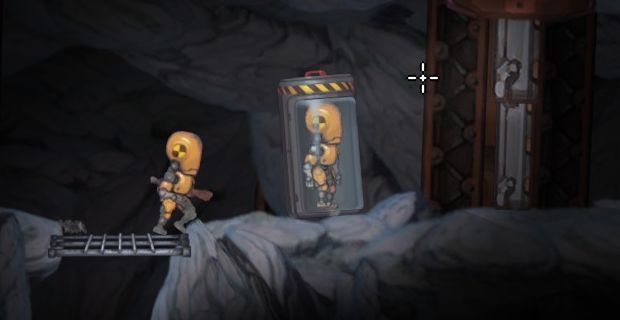 When you first start the game, you begin as a geriatric spaceman who sooner or later dies to the flamethrowers or grinding traps of the caves. But I almost prefer the crash test dummies who replace him. They can build whole new dummies themselves, putting you in control of your own respawn points, and the way their frames crumble limb by limb is darkly entertaining. At one point, two huge boulders started rolling down a hill after me. The first caught up to me, floored me and rolled right over. I got up thinking, “what a miracle, I can run away from the second boulder easily”. Then I saw that one of my legs was gone – it had been utterly crushed. Here's some footage of me hopping comically away from the giant rolling calamity as fast as a once-bipedal robot can. I did not escape.

It has its rough spots – oh man that pause button – and won't be finished until next year, but there’s something weirdly pleasing about the physical comedy in Planetoid Pioneers that makes it many times more fetching than the next plain-faced Metroidvania. You can play in co-op as well. I haven’t tried that but I can almost guess at the palpable silliness you could get up to, even if you and a friend only played it for an evening or two. 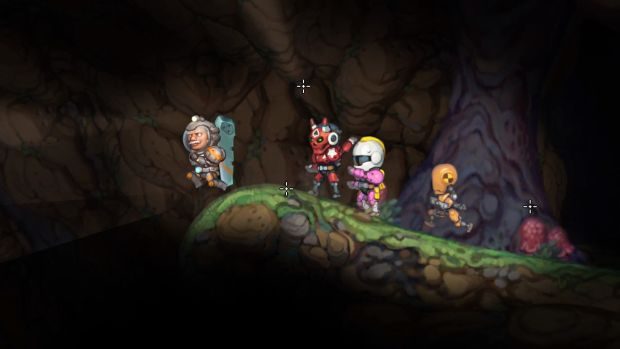 Myself, I’ve reached a point where I’m not sure how to proceed but I’ve seen footage of a grappling hook (oh ye great wonder of game design!) and think this might be the answer. I’ll be able to pass through the next area with that.

I mean, once I get my head out of this door.

Planetoid Pioneers is £6.99 on Steam (there’s also contributor edition with editing tools for £22.99 which is arguably the true version but I DON'T GOT TIME FOR THAT). These impressions are based on build 2010359