This is Playstyle Royale, where I pretend eight months going by isn't too long for sticking with the same intro formula to look weird, but also where I head into a battle royale game and try to win my chicken dinner while adhering to arbitrary rules.

This week I'm playing Apex Legends, and the floor is lava. I'm going to win a game without touching the ground.

There are three things you need to know about Apelegs. 1) It is a great game; B) it has a robot; iii) the robot has a grappling hook. As per Playstyle regulations, I've got five tries to win a match. Let's go.

I'd forgotten this was going to be awkward. One more thing about Apelegs: you have to play in teams of three, and the strangers I'm with aren't aware the floor is lava. I try to remedy this, but they ignore me. They do for the whole round, in fact, but that's way better than the shouting I was expecting.

As the dropship sails over the map, one of my teammates makes me the jumpmaster. This means I get to choose where we land, though I foolishly haven’t figured out where. I drop down into Airbase, and immediately realise I have made a terrible decision. And that the concepts of both ‘floor’ and ‘lava’ must be fudged.

I land on a sci-fi aeroplane, which is obviously not lava, but at first glance all the ground around me is. I eventually decide that any kind of raised structure has escaped the tide of molten destruction, and that the platform beneath me is safe. From there I can jump onto some cargo crates, which is an encouraging sign. My grappling hook will be vital, but I'll still need to rely on random clutter when it's on cooldown.

I hop between the crates, then use my hook to ascend to a nearby roof. It's all going surprisingly well, even if I do only posses a Mozambique for a weapon, and much regret for failing to check the inside of the plane I landed on. I don't have time to go back, though, because my friends find someone to shoot at. 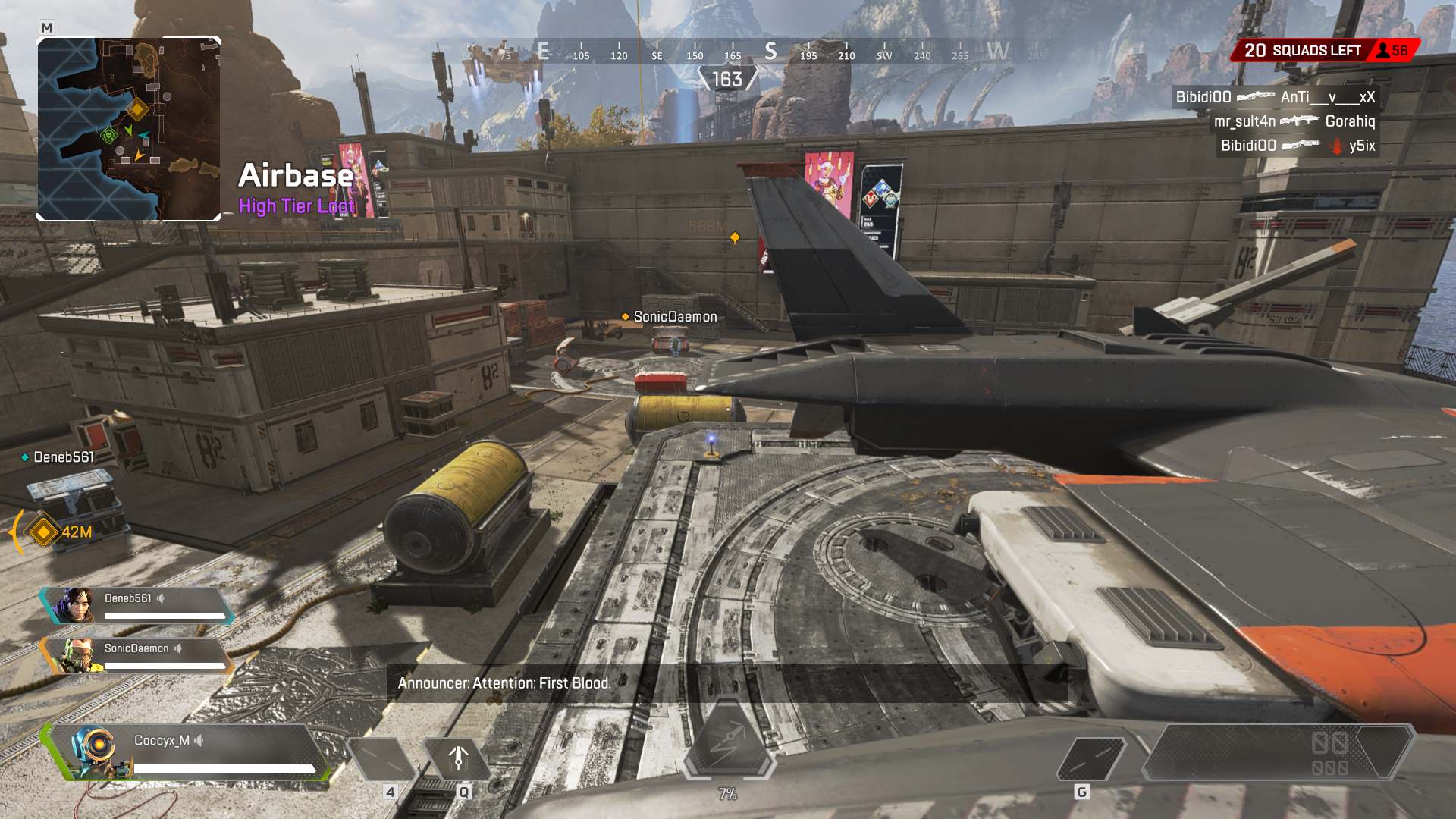 They're fighting on the other side of the base, and I'm forced to spend another thirty seconds getting antsy as my zipline charges up. Did I mention my robot also has a zipline? He totally has a zipline.

I cross the base, then tip-toe down some stairs towards the back of an unsuspecting foe. I actually fool myself into thinking I'm going to get a kill with the Mozambique, a pistol shotgun so bad that even Respawn keep making jokes about it.

I miss spectacularly, and my would be ambush-ee turns around and shoots me. I'm knocked to my knees, but a teammate takes out my assailant, picks me up, and runs off inland. I follow behind, after grabbing a mildly better pistol from the dude we just killed. The death boxes for the other squad members lie out of reach. Imagine them sinking slowly into a molten lake.

We hit an open stretch of ground where the going gets tough, and I'm occasionally forced to spend a second or two on the floor as I hop between rocks. It's fine. The Terminator took a while to burn, right? Whatever space-metal my legs are made from, they can take a second in the heat. 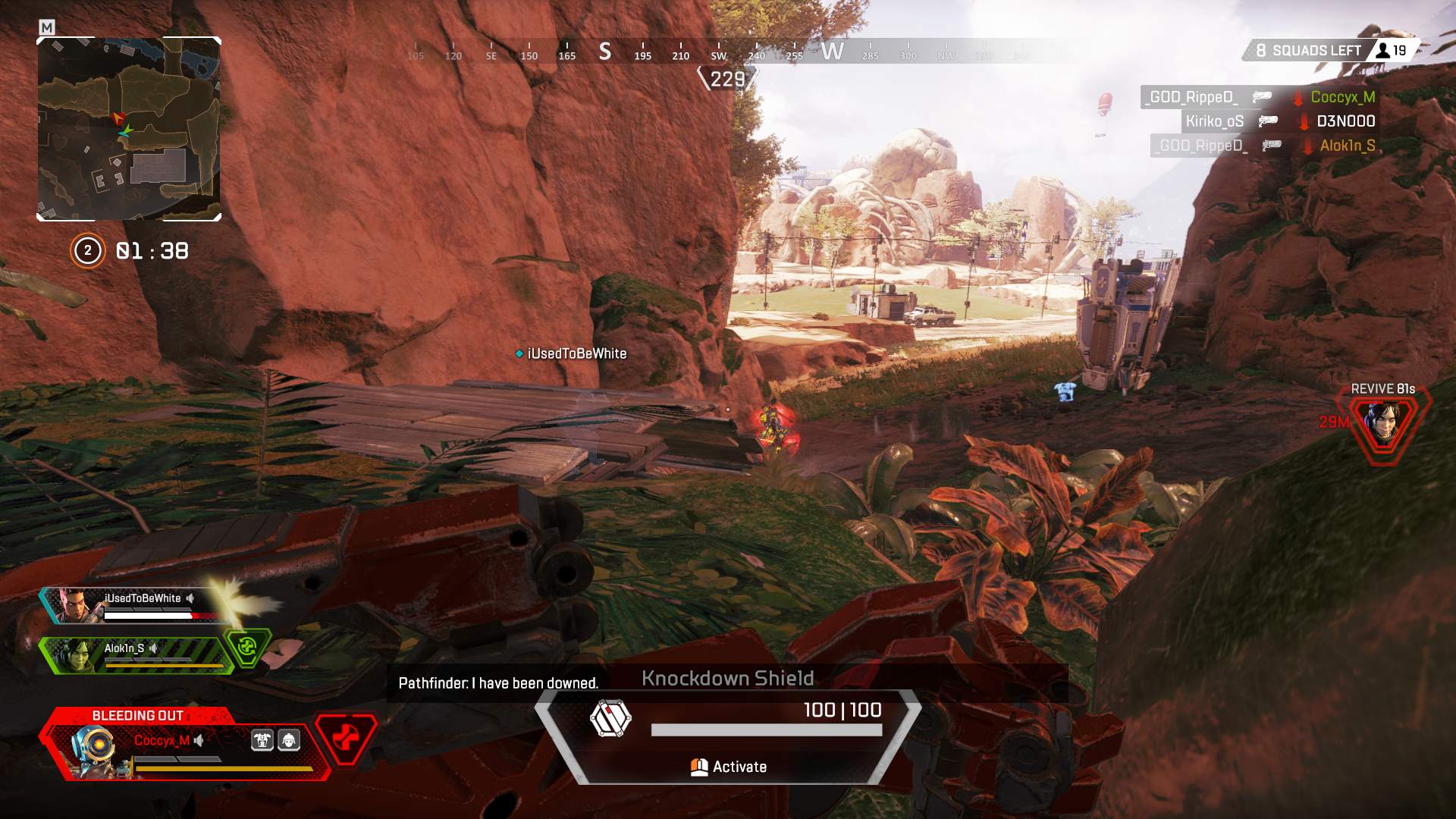 Less fine is the way I've neglected to pick up any ammo, and that my friends are already in another firefight. After some sensational grappling swings from telegraph poles, I make it to the cave where things are kicking off. I fire the five bullets in my pistol, look a bit sheepish, then get knocked down. Then so my do my teammates, and the round ends.

The jumpmaster in our next squad takes us to Market, a big building where I get to count the top floor as... not the floor. That lets me actually get reasonably well equipped, with a Triple Take, a sniper rifle that fires three bullets a time, and a Wingman heavy pistol. I'm terrible with the Wingman, as soon becomes evident in a fight on a massive dinosaur skeleton. I like that you can fight on a massive dinosaur skeleton. I don't like that we all die there.

Round three is more disastrous still. We drop into the eastern edge of Cascades, a village with an unseemly amount of empty space. We're there because it's the loot-enriched hot zone for the round, which is also why half the server joins us - and shoots me off a roof while I wait for my hook to recharge. I'm knocked to my knees again, then my squadmates die. Hurray. 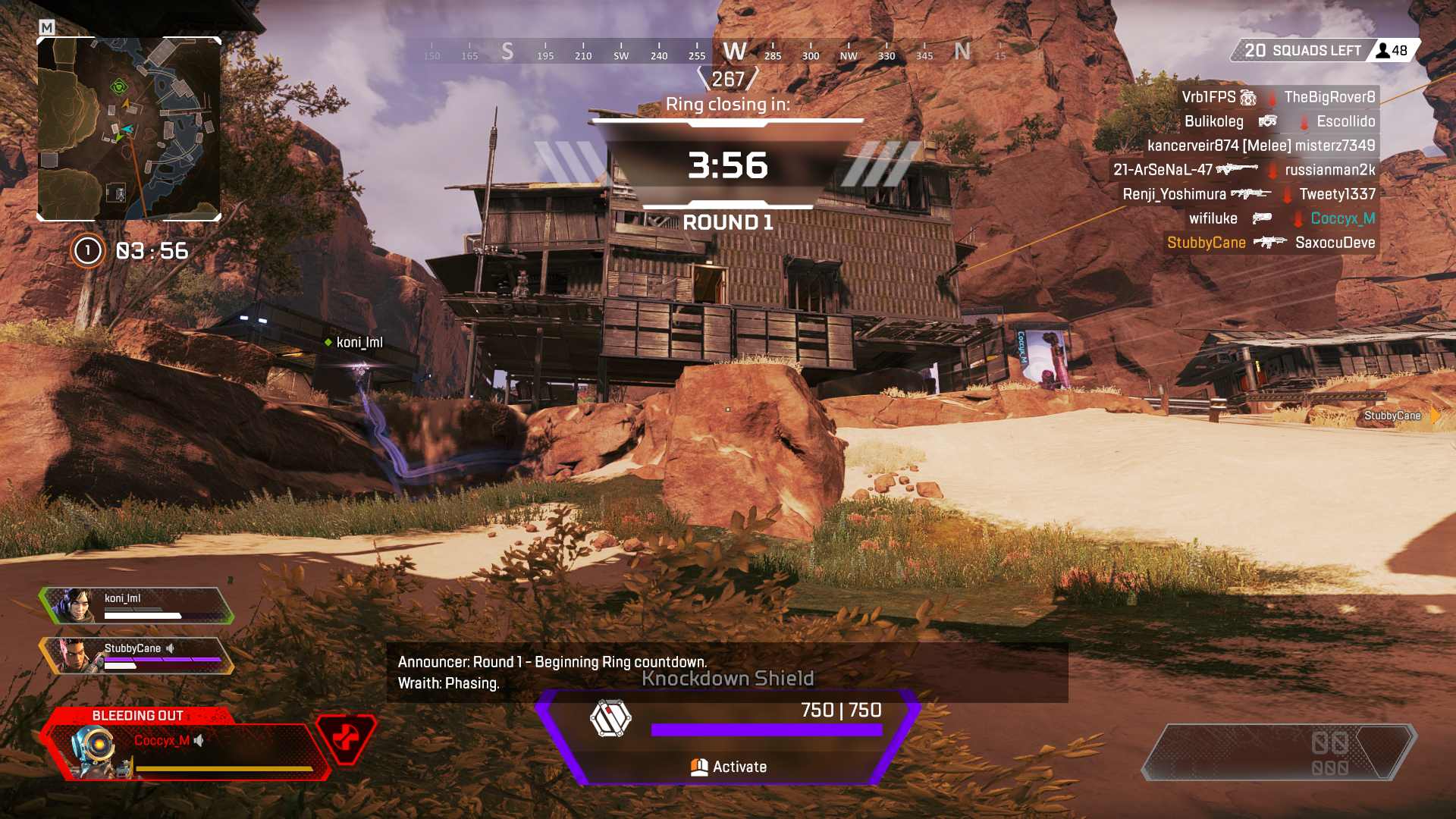 I'd hoped for a quieter start to round four, but our jumpmaster has their sights set on the supply ship. One of those always flies in at the start of every round, promising an abundance of loot and opponents. I see at least two other squads land with us, and shooting soon engulfs the ship. On the bright side, the ship definitely isn't engulfed in lava.

I get my hands on a gun, panic behind a box for a bit when I realise I've hardly got any ammo, then venture below decks to revive my friend. I manage to, despite the way I can still hear another enemy running around. My friend snaffles up some of the ammo I desperately need, then jumps off. I follow.

Several grapples and seemingly unnecessary ziplines later, we liaise with our other squadmate in Skull Town. (They missed the ship entirely, the wazzock.) Skull Town turns out not to be the mecca I'd imagined: there are buildings aplenty, but they're all one story high, and are therefore fiery death traps as far as I'm concerned.

I still manage to get my hands on a Scout rifle. Better yet, my stingy squadmate drops me a fancy, super-rare scope that can highlight enemies. It's a gift I know I'm not worthy of, even before we get into a prolonged long-ranged fight with another squad. 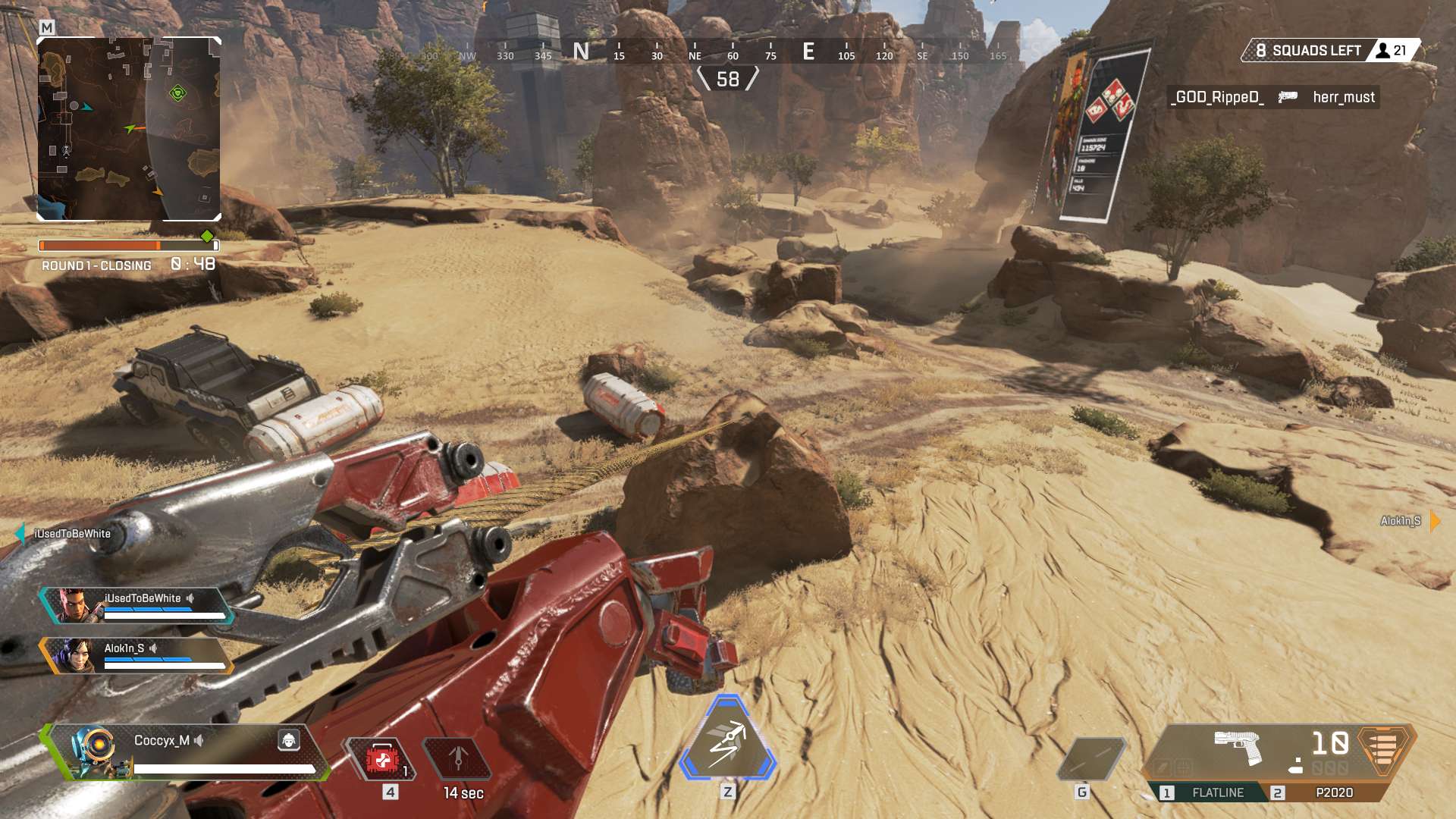 I'm late to the party, as always, but I make up for it by swinging up to a sneaky sniping point. I then make down for it by revealing my position with a barrage of ill-aimed shots, failing to do more than chip at easily replenished armour. Fortunately, the bads I'm shooting at are almost as terrible - but the third squad that swoops in is better. My friends get caught in a death sandwich, and I have to retreat. Both squads seem more interested in killing me than each other, so I hide behind a rock (on a lava-free ledge, of course) until a comically intense hail of bullets stops whizzing overhead. Then I get heroic.

Apelegs lets you revive your friends at special respawn points, as long as you can collect their souls from their corpses before they time out. As I zipwire down to my squadmates' death boxes, I've got ten seconds on the clock.

A Bangalore, Apelegs' professional soldier character, starts shooting at me, but I jump down and hide myself in the cover from her own smoke grenade. I'm still not on the floor, I'm on top of my own friend's death box. I grab their soul, hop over to my other squadmate to collect their's, and then grapple the eff out of there. It's a really good swing. Guidesman Ollie would be proud. I manage to catapult myself to the (slightly elevated) porch of distant hut, and slam the door a second before I can be shot to death.

Then I'm shot to death by the people hiding inside the hut instead. 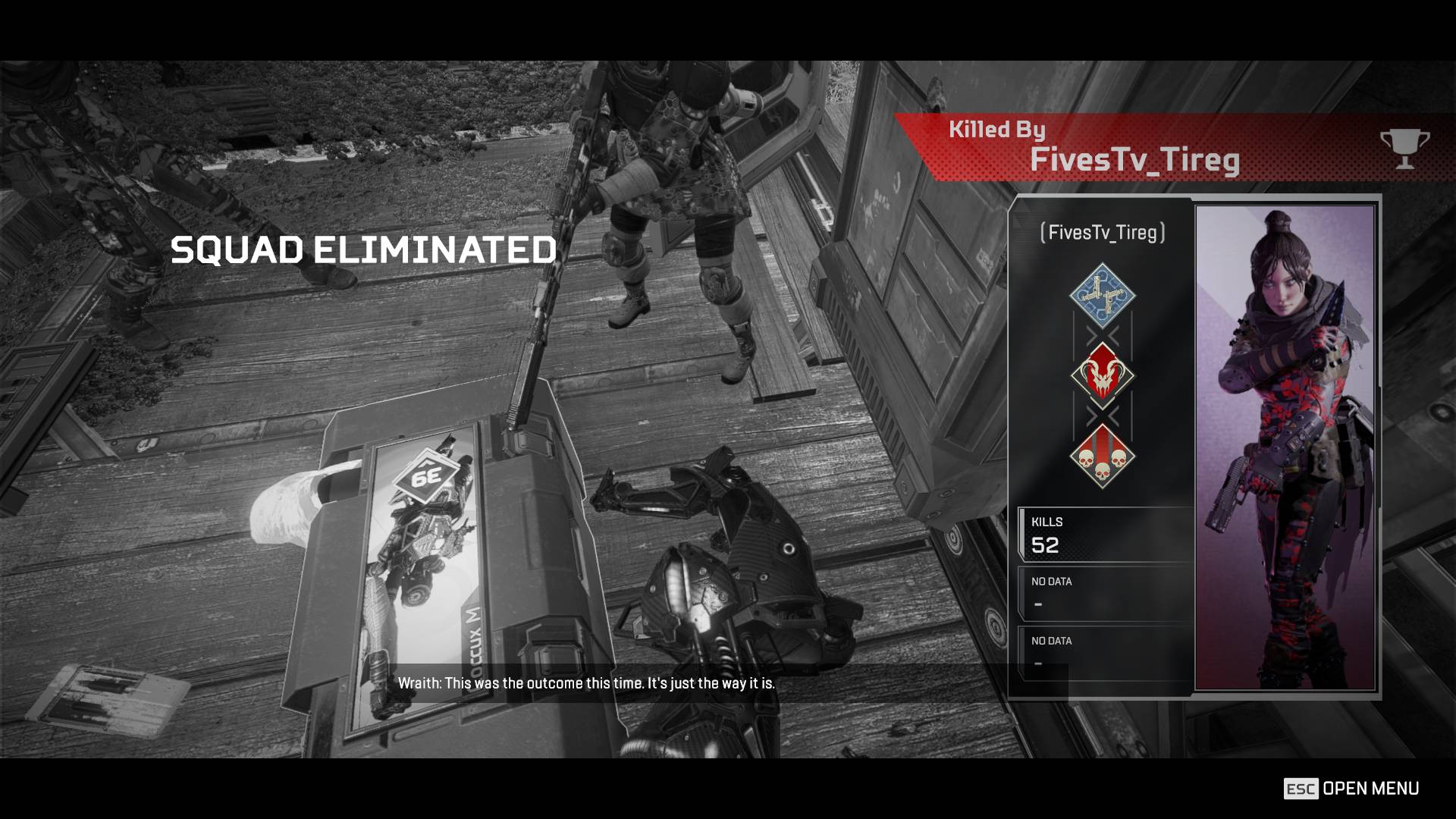 Round five had a lot riding on it, though round five did not want to be ridden.

The jumpmaster deigns not to pit us against the hordes, for which I am grateful. I'm doubly thankful when they glide us down to Runoff, with its elevated walkways that let me snag a decent loadout. I spit some fire with my Spitfire at a lone enemy beneath me, and my squadmates close in to finish him off. This is by far the smoothest a fight has have ever gone, and the smoothest one ever will.

We make our way over to Cascades, where one of us makes their own way into a house. Their frantic pinging and subsequent death tells me an enemy is in the house, as does that enemy's shotgun when I hurry in a moment later. I'm killed, and my remaining squaddie gets hunted down shortly after. 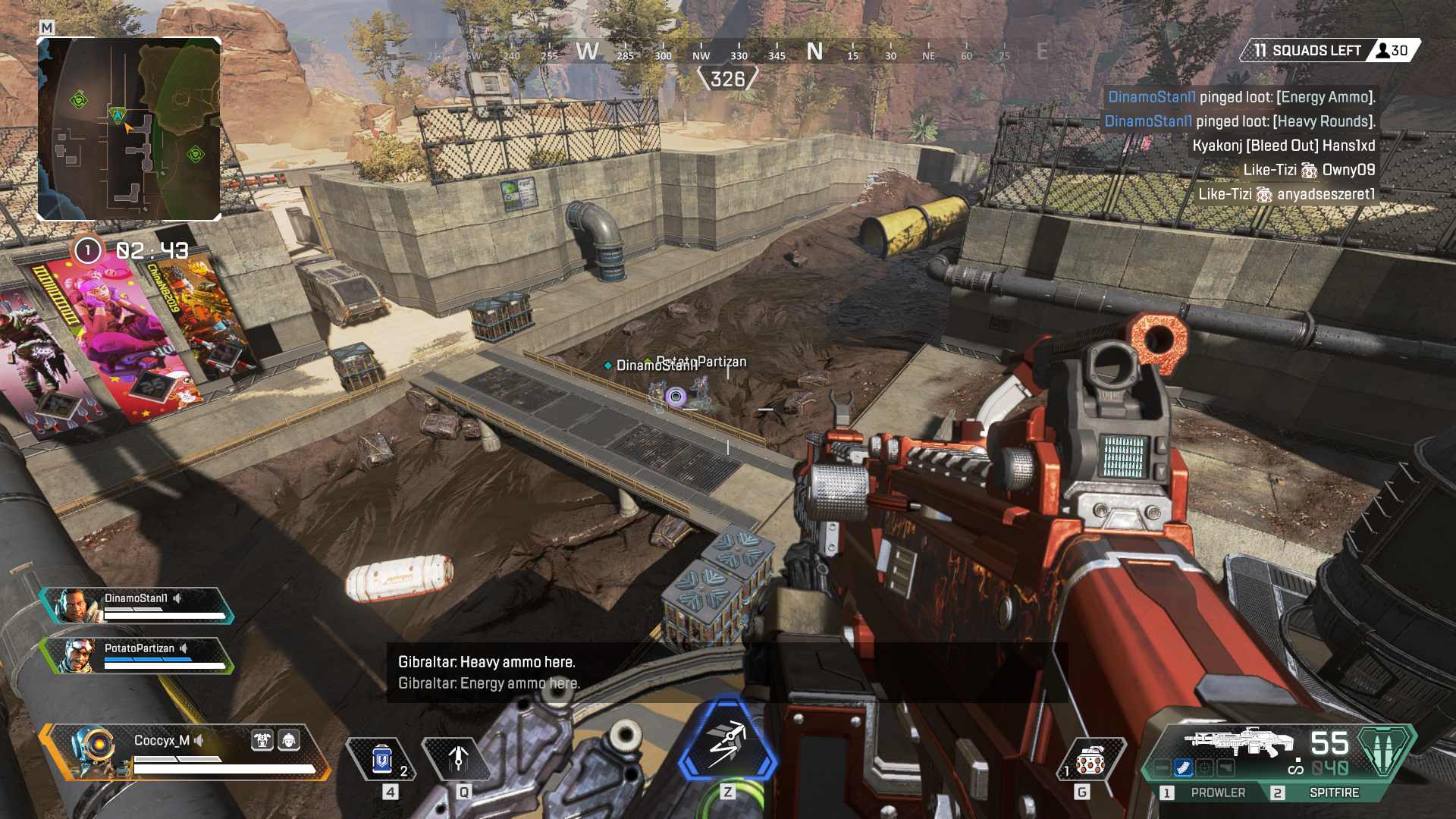 It turns out soldiers with guns are more deadly than imaginary lava. Who'd have thought it.

If you've got an idea for another Playstyle Royale, do let me know in the comments. It's bound to happen eventually.