This is Playstyle Royale, where I head into Playerunknown's Battlegrounds [official site] and try to win my chicken dinner while adhering to arbitrary rules. This week, I must hunt down every air drop I see.

Crates are a game player's best friend. I love cracking them open and sucking out their loot-containing innards. The crates in Plunkbat offer even juicer innards than most, and contain weapons that can’t be found anywhere else in the game. They’re also death traps.

If you’re not aware, Plunkbat hems players together with a wall of death that periodically contracts to form ever smaller circles. Once per circle, a plane drops a crate (or two, in rare instances) along a random trajectory. They usually get the attention of everyone in the area. If people don’t go for the crate themselves, you can bet they’ll be lying in wait for the sucker that does.

Enter: me! My plan is to parachute down close to the centre of the map, grab a car and wait for the sound of plane engines overhead. There are certain garages that have a very high (though not guaranteed, I only found out recently) chance of spawning a vehicle, so I load up the Interactive Map on my second screen and aim for the most central one I can see that isn’t in a major town.

Things don’t start off well. I play a series of games where I die before I manage to spot my first crate, and so I recruit my friend Zoe to help me. We’ve just finished picking over the buildings near where we landed when a lucky crate drop appears about 30 seconds away from us. Less fortunate is the fact that it’s right outside the apartments and the school, where players with much better gear than us are bound to be watching from.

Somehow, we manage to loot the crate in peace - but its contents are crap. We find a compensator, some ammo and a Kar 98 sniper rifle. It’s the only gun that can appear both in crates and elsewhere in the world, and while I’d normally consider it a lucky find this is about as underwhelming as a crate can be. 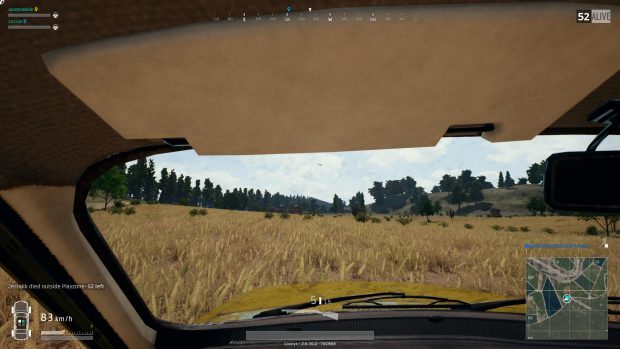 We pile into a Dacia and head north, and after some more looting we spot another crate dropping in the distance. Driving in first-person is nerve wracking in Plunkbat, especially in a Dacia where you can only see a tiny part of the windscreen whenever there’s a downhill section. I can’t really blame that for the ditch that I drive into though, which sends the car into a barrel roll that ends with us upside down.

The crash draws the attention of the people in some nearby buildings, but we manage to scramble behind some trees. That’s when someone with their own Kar 98 starts shooting from another angle, leaving us with nowhere to hide. At least we reached our first crate!

We nab another car at the start of our next game, and I narrowly avoid driving it into another ditch. I don’t avoid… this. 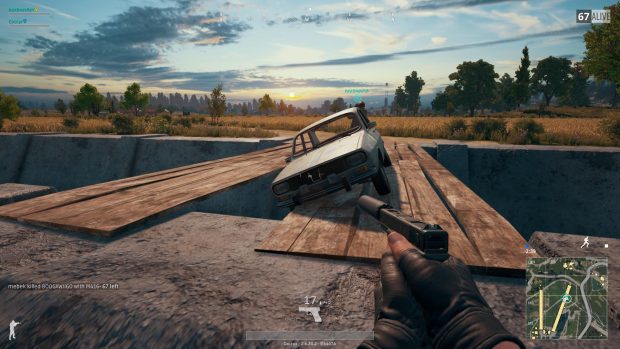 With our car out of commission, we decide our best chance is to head to the ferry pier and find a boat. The way the circle’s looking, we’re probably going to end up having to reach Sosnovka Island. Zoe is a ways ahead of me, and doesn’t spot one so runs over to the bridge. We can hear another group getting ambushed as they try and run across it, so Zoe starts swimming instead. It’s tortuously slow going though, and I don’t think we’re going to outpace the encroaching blue zone.

I catch a glimpse of a boat that Zoe had missed, and although I lose half my health bar to the blue while wading over to it, I’m soon motoring towards them. The ambushers on the bridge have got me in their sights, but there’s nothing I can do but head straight towards them until I can pick Zoe up outside their line of fire. 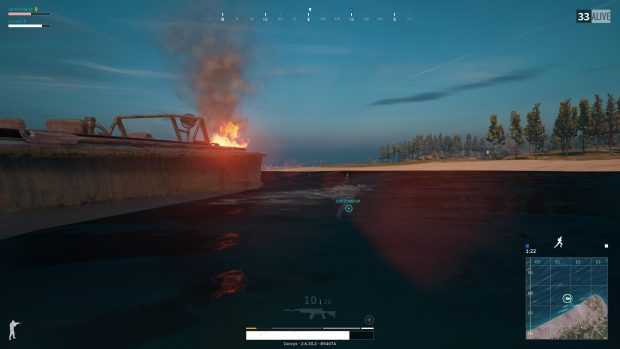 With Zoe on board, we drive out from underneath the bridge and I do my best to zig zag through the hail of bullets that’s now coming at us from multiple directions. The boat catches fire, forcing us to ditch it and swim to shore. Luckily we’re close enough that we can make it the rest of the way underwater, where we can’t be hit.

By the time we emerge, whoever was shooting at us seems to have lost interest. A crate drops on the other side of the river, but we’d never have had time to get it and someone’s already heading for it anyway. We head up to the radio station just east of the military base, where Zoe unceremoniously gets sniped. I manage to take the guy out and grab his 8x scope, but I’m killed shortly after by someone who spots me running over a hill. It’s an anticlimactic ending and we didn’t reach a single crate, but at least we got up to some cinematic boat antics.

After 15 minutes or so of uneventful looting in our next match, we find ourselves in the middle of the circle. We decide to wait, look out for planes and see where we’ll be compelled to go next. A crate drops just a short sprint away - into the sea, and down some very steep looking cliffs. Without hesitation, Zoe leaps. I watch as she plunges into the depths below, steering just clear of some rocks. 2 minutes later, she drops an AWM at my feet - the best sniper rifle in the game.

We get gunned down in the next houses we come across before I have a chance to fire a single shot. 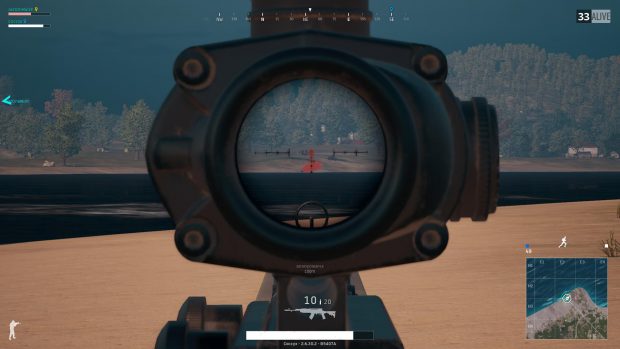 Now Zoe-less, nothing much of interest happens in my next game until the circle contracts and I’m forced to drive across a bridge onto Sosnovka Island. It’s madness: there are two other cars attempting to cross at the same time, and someone is shooting at us from a nearby lighthouse while at least one other attacks from the bridge itself. The car in front of me spins out of control, its driver shot dead. I weave past it, and somehow make it through to the other side.

I’m heading for some buildings in the far north east of the island when I start getting shot at from two different directions. I turn around and ditch the car, and the plane chooses that moment to fly over and drop a crate just where I’ve come from. Rules are rules, I sigh, and start making my way back - only to be shot at again. Someone else starts running for the crate, which makes trying to pursue it doubly pointless. Instead, I wait for him to start being shot at by the sniper and then run towards the rocks where he’s hiding. He notices, but I duck behind my own rock. I wait for him to start shooting at someone else again, then sprint towards his position. This is working!

Someone runs me over in a jeep. 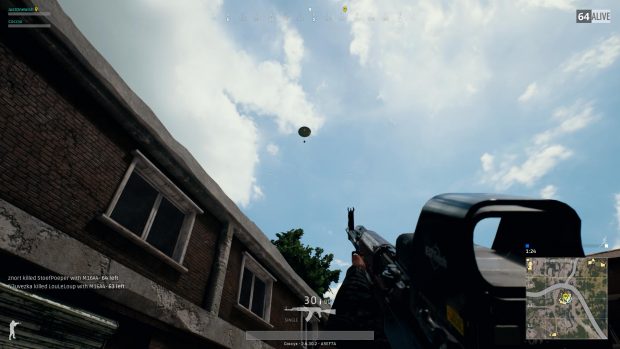 One last try! I bag a Dacia at the start of my next game, and head off into the north east, far enough from the flight path that I should have the place to myself. A plane passes by, and I follow it in the hope that the crate hasn’t already dropped. Luckily for me, one falls to the ground just ahead of me. I’m fairly confident there’s no one around, so I go straight up to it. I find an M24, which the game describes as a ‘serviceable sniper rifle’. I’ve so rarely actually used stuff that I’ve found in crates that I’m not even sure if it’s better than a Kar 98, but I’ll take it.

I loot the nearby town, and spot someone running over to the empty crate. It’s an easy kill - I land a body shot on him, then he misjudges where I’m firing from and crouches down on the side of the crate facing me. One more shot takes him down, and I nip back up in my Dacia and grab some of his medkits along with an upgrade for my vest.

I’m fairly near the centre of the circle, so I hole up in the town I’ve already looted. By this point, the play area is getting pretty small and there are only 14 people left. The next drop appears, and it’s only a minute’s run away. It’s the riskiest crate I’ve yet had to go for: there’s a building right by it where people could be lurking, and at this point there are bound to be others nearby. 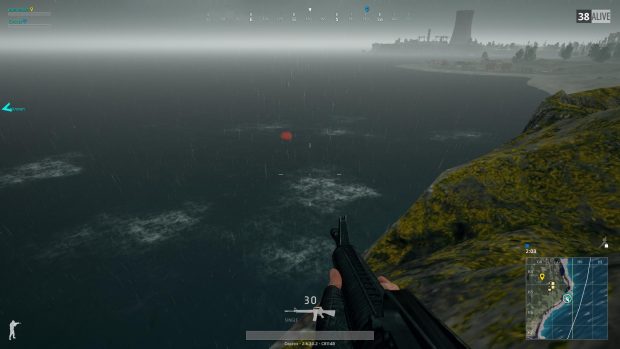 Miraculously, I manage to loot it undisturbed. I find a Groza, a gun that I didn’t even know existed in Plunkbat, alongside an 8x for my M24. It’s the first time I’ve ever had a special weapon in each slot, and easily the best armed I’ve even been for the final stages of the round. I reckon someone else is gonna go for the crate, so I hide in the building and train my new gun in that direction. I’m looking in exactly the right place when an enemy appears.

We trade shots but neither of us hit each other. I see him running in one direction while throwing a smoke grenade in another - he’s trying to fake me out! I ambush him as he turns a corner, and my Groza chews through him. I find some attachments on his body and make my way up a hill with the blue zone lapping at my heels. There are only 3 other people left.

I know there’s almost certainly going to be someone in the houses to my right because they’re the only buildings in the circle, which means I can’t cross the field ahead of me until I’ve checked them out. I’m on my way to do that when I get shot from a window by someone with an AKM. Despite my superior firepower, I’ve got no chance of surviving when I’ve got no cover and I’m the one being fired on first.

And so ends the first Playstyle Royale. Weirdly, every crate I went for was uncontested - which certainly isn’t representative of my past experiences. Maybe I was more on the ball with heading to them at the earliest opportunity, though it’s more likely that I just got lucky. Just not lucky enough.

If you’ve got any rule suggestions for me to follow in the next article, let me know in the comments. We’ll earn that chicken dinner yet.