Have you packed your broomstick, reader? Are you ready to learn spells, master potions, reckon with some unsavoury facets of a beloved children's book series, and gorge yourself irresponsibly on flavoured beans? Release this week, Pottergame is a wonderfully broken mess of an homage to Hogwarts - a broken, nostalgic collectathon that's at once a shovelware joke and a cutting criticism of the Potterverse.

Pottergame doesn't attempt to reconcile with the parts of Harry Potter that, well, haven't aged particularly gracefully. In developer Kate Barrett's eyes, there's no separating art from the artist. Instead, Pottergame pushes the fiction's uncomfortable habits front and centre. It does this by aping Potter's own history in videogames - Pottergame is knowingly a piece of shovelware, a haphazard recreation of Hogwarts where you're tasted with one, simple task: collect those beans. 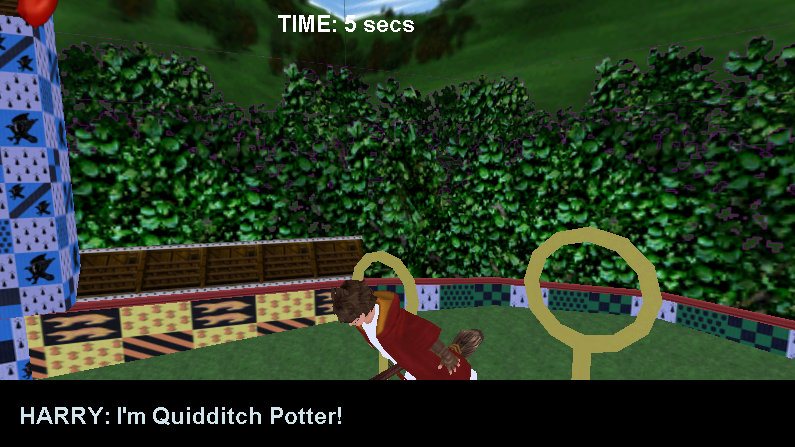 This is very deliberate trash, mind. Half the models in the game are left untextured, and what textures do exist are often warped or broken. Harry glides around in t-poses, even during the Quidditch minigame (oh, right, there's a Quidditch minigame). NPCs unceremoniously clipped through walls, or are left hanging in mid-air. Fellow students are caricatures - Ralph Weasley can't get through a line without saying "bloody 'ell, Harry" - or else utterly surreal. A young witch gives praise to Big Harry's watchful, caring gaze, clipped part-way through a stone wall. Nearby, Neville Longbottom fiercely guards his Bean sanctuary.

JK Rowling is never named, of course (referenced only by her crime fiction pseudonym Robert Galbraith, arch-nemesis of the ancient wizard Jeremy Corbyn), but the game is very conscious of a long shadow left behind by both the author and her work. 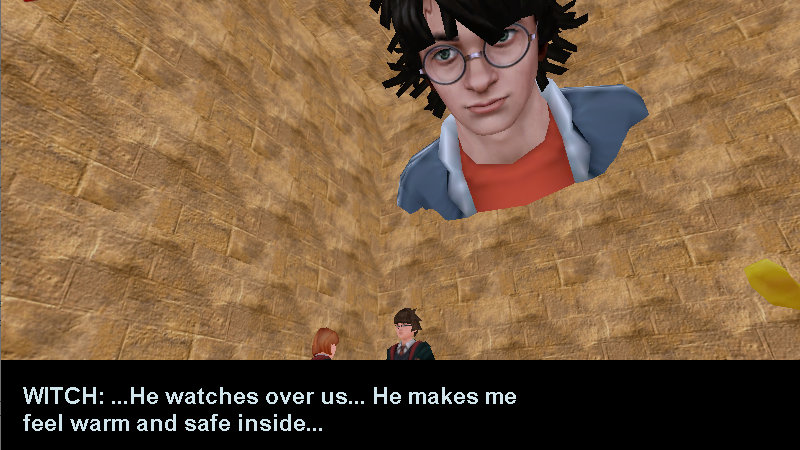 Students in the library, one of them seemingly trans herself, will bemoan the school's new gender-essentialist bathroom policies. Knights guard framed drawings of The Ickabog, alluding to a bizarre moment wherein the author shared a child's fan-art with a wholly-unrelated caption misgendering a trans woman. A collectable scroll from the fictional Galbraith will insist that house-elves enjoy being treated as slaves, actually, and any suggestion otherwise is anti-wizard propaganda.

Like many queer folks my age, I grew up with Harry Potter. Some of us still cherish those books and films, even as the uglier sides of the work become harder to ignore. Here, those uncomfortable moments are unavoidable - ignore them, and you're simply left with a shoddy castle and too many beans. At the end of the day, Pottergame asks if those beans are worth the hassle.

Pottergame is available for free over on Glorious Trainwrecks. Now, if you'll excuse me, I need to lie down - those beans did a number on my gut.