If you click on a link and make a purchase we may receive a small commission. Read our editorial policy.
Premature Evaluation is the weekly column in which Steve Hogarty explores the wilds of early access. This week, he's exploring the intersection of art and engineering by driving a big wooden spider-car in survivalist MMO Last Oasis.

Sometimes I worry that open world survival sims are romanticising the very real challenges involved in carving out a nomadic existence on a planet that’s stopped rotating by constructing elaborate wooden spider-cars and captaining them across vast deserts, forming clans and trading limited resources to take control of the world’s remaining oases.

When the world eventually does stop turning, I fear that this generation, spoon-fed by games that promised delightful escapism to survivalist playgrounds, will in fact be ill-equipped for the harsh reality of repeatedly punching cactuses until their pockets fill up with cactus flesh.

Last Oasis is the most recent culprit, a multiplayer craft ‘em up set on the narrow habitable strip of a tidally locked Earth, between the half that’s being baked and the half that’s being frozen, in which you ride around on strandbeests in search of water, food and the various bits of garbage required to keep you alive. What is a strandbeest? They’re the real-world creation of Dutch artist Theo Jansen: various multi-legged, wind-powered kinetic structures that resemble K’nex figures and skitter across beaches like scorpions made of chopsticks. They exist in the space between art and engineering, says the artist, and are neither living nor dead, though if we’re being pragmatic, they’re exactly as alive as a bag of broom handles rolling down a hillside. 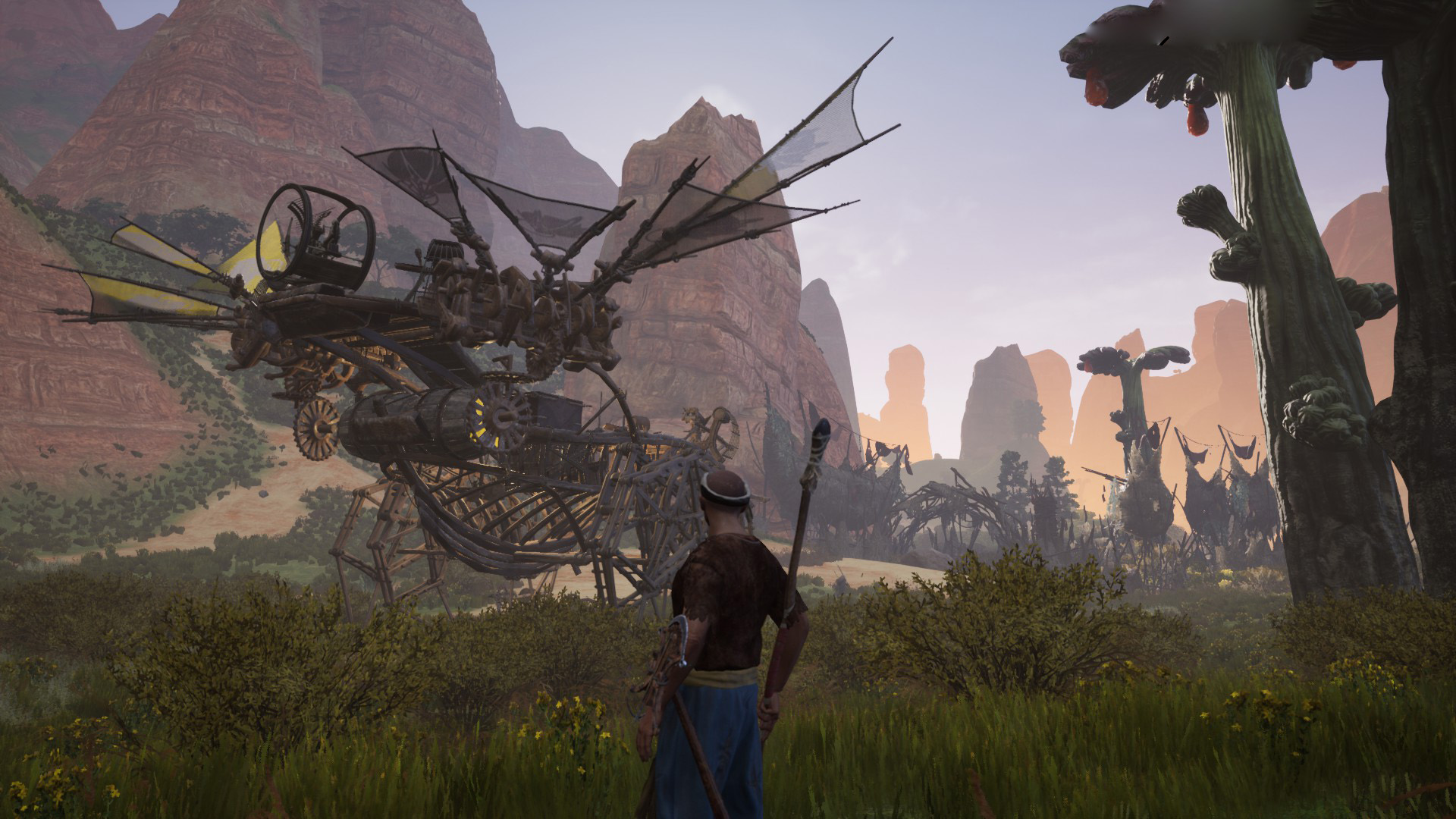 Whether alive or not Jansen’s invention is totally entrancing. Wing-like mechanisms capture the kinetic energy of the sea breeze and transfer it via some inscrutable machinations into the motion of a set of bug-like legs and undulating worm bodies. They appear strangely organic, like vehicles from some other dimension where wheels were never discovered, and against the backdrop of the windswept and metal-grey beaches of the North Sea they appear utterly alien. You can’t help but wonder what it would feel like to get run over by one, all of its scuttling wooden feet trampling on your naked torso. It would probably feel nice.

Strandbeest clearly captured the imaginations of the developers of Last Oasis, who have placed them front and centre of their unique open world adventure. You’re a nomad on a rite of passage, ejected from your home aboard the flotilla – an unseen, city-size strandbeest that scoots around the only bit of the planet that’s still the right temperature – and forced to scramble for survival in an environment that handily contains everything you could possibly require, just lying about on the ground. 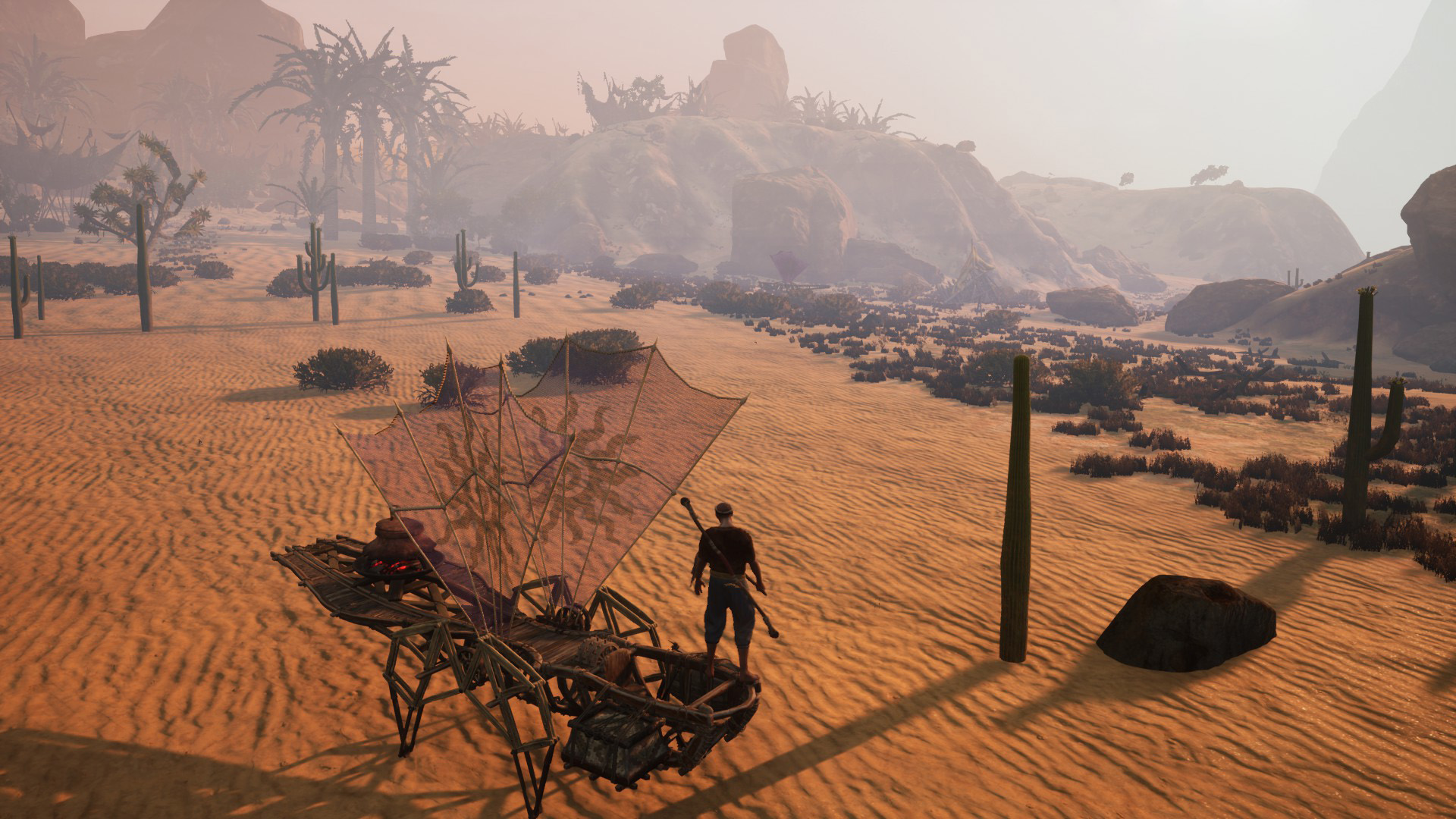 At the game’s outset you’re a veritable resource hoover. Tapping away at the harvest key while simply running in a straight line fills your inventory with copious amounts of the usual suspects – wood, stone and fibre – until you’ve got all the detritus you need to start chipping away at the game’s blossoming tech tree, constructing campfires to distill water from cactus flesh and building spinning wheels to weave fibre into useful cloth. It’s not long until you’re able to build your very own, personal-sized walker, which you can then ride around the desert like a land-faring pedalo.

The relationship between player and vehicle puts me in mind of the desolate side-scroller Far: Lone Sails, or a land-based variant of the sea-faring survival sim, Raft. This cute little walker, which you can give a name to if you’re feeling affectionate, can be loaded up with water, resources and useful machinery and acts as a sort of roving base of operations. You respawn there if you’re ever clubbed to death by the rupu – the primitive monkey tribe who’ve made their home among the dunes in little mud huts on stilts – and you can use scavenged resources to improve its attributes and add weapons and armour. 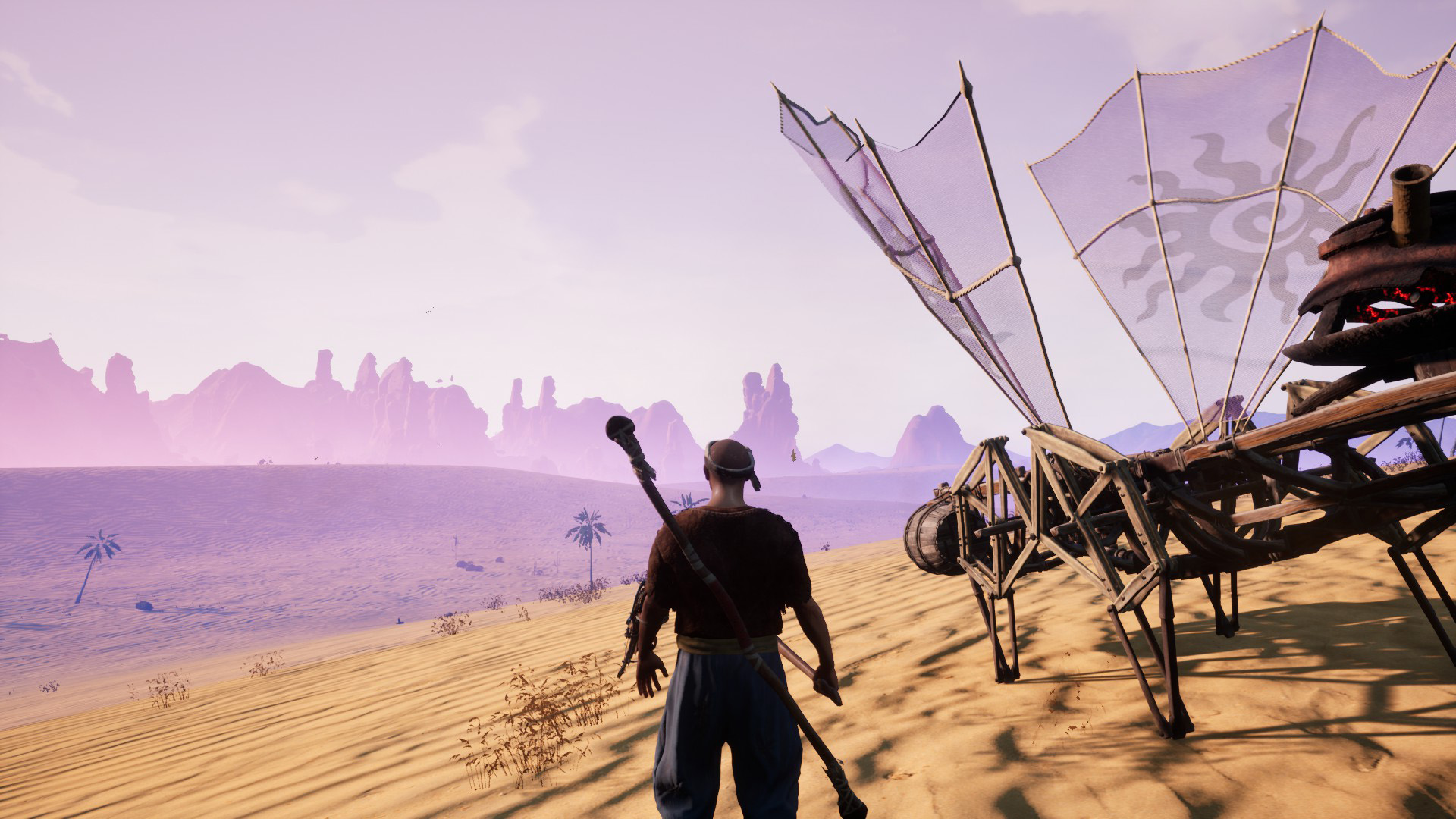 The small walkers are unexpectedly fun to drive too, capable of reaching speeds that can send them whizzing over the lips of sand dunes. The bigger walkers are forever creaking in oaken agony, like they’re always seconds away from collapsing into a pile of splinters.

From the moment you’ve got a vehicle, you spend much of your time raiding rupu camps for the parts needed to construct ever more elaborate walkers, which require increasingly large player crews in order to properly staff and operate. Last Oasis is a co-operative and clan-focused MMO, and while it’s perfectly possible to scoot about on your lonesome, everything about the game funnels you towards teaming up with other players aboard super-sized strandbeest and then bullying or subjugating any weaker nomads you encounter. Oases exist as instanced zones across the world map, and the largest walker in any given oasis – for as long as it can hold its position against any chancers – is granted ownership of that area and most of its resources. 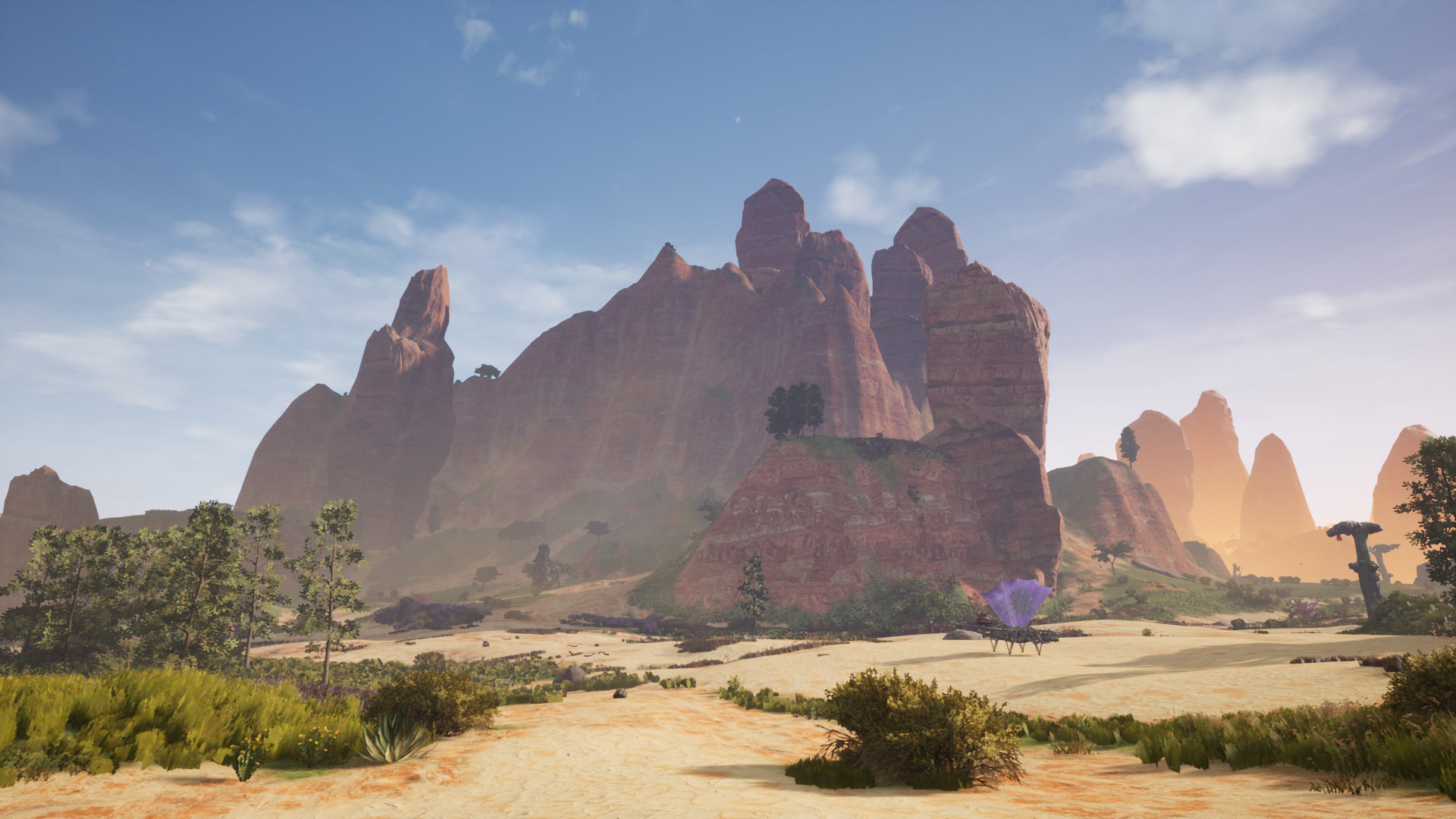 For conflict-averse me that’s always the least appealing part of these kinds of MMOs, which often seek to appeal to new players just enough to create a steady stream of human fodder for its handful of heavily invested, prized veterans. Those multiplayer survival games that shovel novice players into the meat grinder are like a snake eating its own tail, or how the Matrix had to be designed with just enough misery and hardship that masochistic human brains would find it plausible. I’m a PvE boy, and I don’t care who knows it.

Your mileage may vary, but I much prefer the parts of Last Oasis in which I’m completely alone, eating mind-altering, psychoactive cactus berries to put in me in the trance-like state required to imagine a new kind of walker, or using a grappling hook to rappel into an unsuspecting rupu’s hut like some post-apocalyptic Spider-Man in search of vines and pelts.

Give me isolation in a vast expanse of nothing-to-do, getting high on a concoction of vitamins as I ride a kinetic structure inspired by a Dutch artist across the desolate rocky landscape of a Eugen Bracht painting. It's really not much to ask.