If you click on a link and make a purchase we may receive a small commission. Read our editorial policy.
Premature Evaluation is the weekly column in which we explore the wilds of early access. This week, Fraser’s been conscripted into World War 3, an online FPS that once again pits east versus west. If nothing else it’s convenient for map makers.

My first hour fighting in the grey European battlefields of World War 3 was not the most pleasant introduction I’ve ever had to an online shooter. The first obstacle was the loading screen, which was quite adamant about not letting me play. It took almost 20 minutes to connect to the game on the second attempt. Finally over the first hurdle, I was immediately directed to an in-progress match that my team was losing spectacularly. Unfortunately for them, I wasn’t going to turn the tide.

The screen was violently shaking, there was shouting coming from every direction and I’m pretty sure I saw a tank. I was shot in the stomach straight away. The rest of the match went about as well as could be expected given my utter confusion. I wandered around, following people I hoped knew what they were doing. Then I died. 28 times. I killed one person, accidentally. My only consolation was that I could at least blame the persistent and often fatal stuttering that I was unable to get rid off. We lost, incidentally. 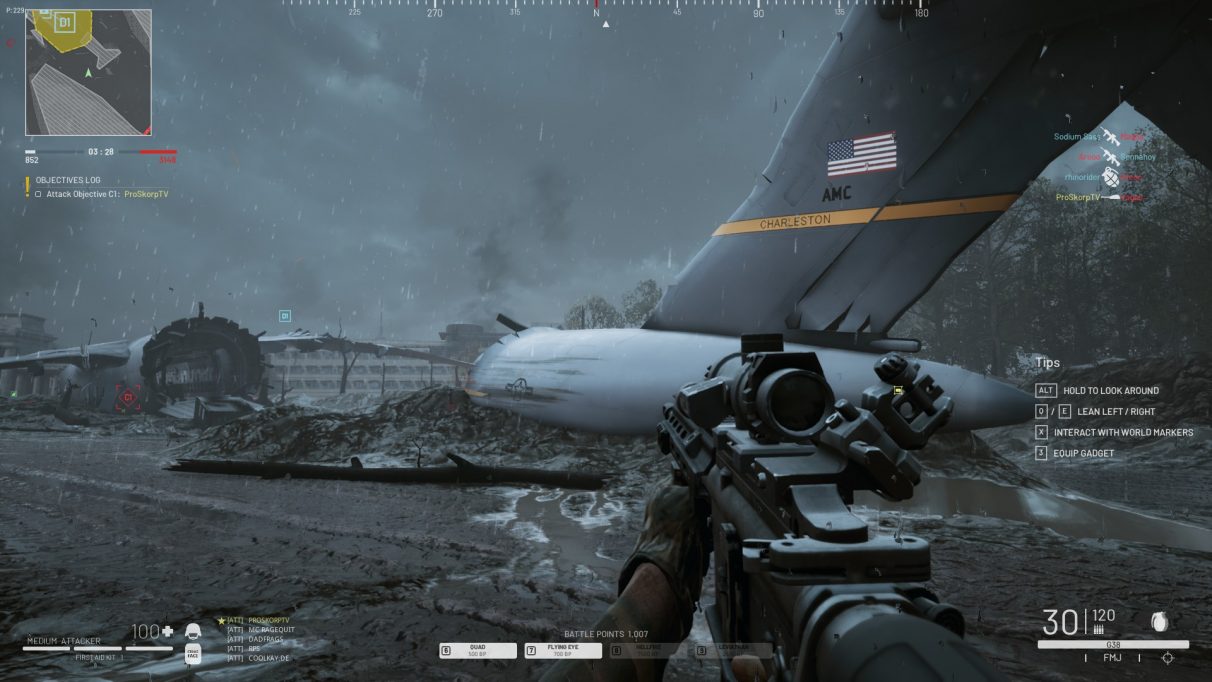 World War 3 is aggressively opaque, which makes me wonder if this is as much a consequence of its hardcore aspirations as it is its early access status. It occasionally throws out some tips, but that’s the extent of its guidance. A tutorial, or even an introduction that isn’t just a regular match absent any context, wouldn’t go amiss, but I’m really holding out for some kind of training mode. Currently, there’s no place to get to grips with any aspect of the game, from its bewilderingly huge list of guns to its ginormous urban maps, without delving into its single mode (another is on the way soon). It’s a terrible place to learn.

The basics are much the same as they are in Battlefield, particularly Battlefield 4. Two teams, split into smaller squads, duke it out over a large map and a series of objectives. The structure is straightforward, but the nuances of the gunplay and the extremely complicated maps are much harder to get to grips with, and it just isn’t a lot of fun trying to learn the game’s ins and outs when the lessons keep being cut short by bullets. And there are a lot of ins and outs. Trying to figure out how armour works or what bullets you need to use when you’ve spawned right underneath an artillery strike is, not surprisingly, quite challenging. 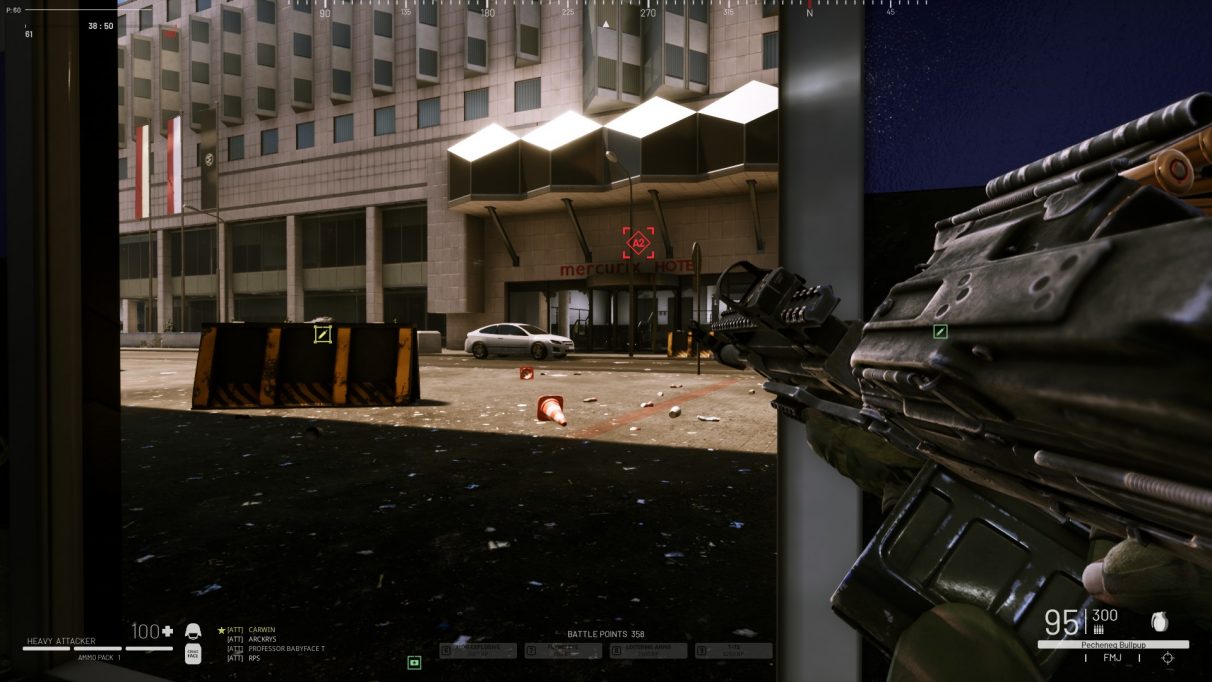 I’m no longer quite as lost, but World War 3 and I are still strangers. It doesn’t really communicate what it is very well, either explicitly or through the painfully generic military shooter setting. There are the broad similarities to Battlefield 4, but there are some sim elements that evoke Arma 3 and close-quarters firefights that call to mind the likes of Insurgency. It seems like its trying to be a massive, explosive shooter where the battles are spread out all across the map, but also this tight, tactical game of infiltrations and teamwork.

There are times where it briefly coalesces, and it’s great. I found myself making a particularly long journey with one squad. We started by making bold sprints across a pockmarked wasteland, diving into waterlogged craters whenever we heard gunfire, everyone moving in unison. At one point we got trapped in a huge crater by a sniper. We had to bait them, risking one of the squad, which would have been considerably easier if this team-based game had voice chat. We got out of that mess with only one person injured. An artillery strike also slowed us down, but thankfully we avoided the worst of it. Eventually, we left the terrifying openness of the outdoors for the claustrophobic tension of a small shopping mall that we cleared inch by inch. Our objective, a shop, became a temporary base. 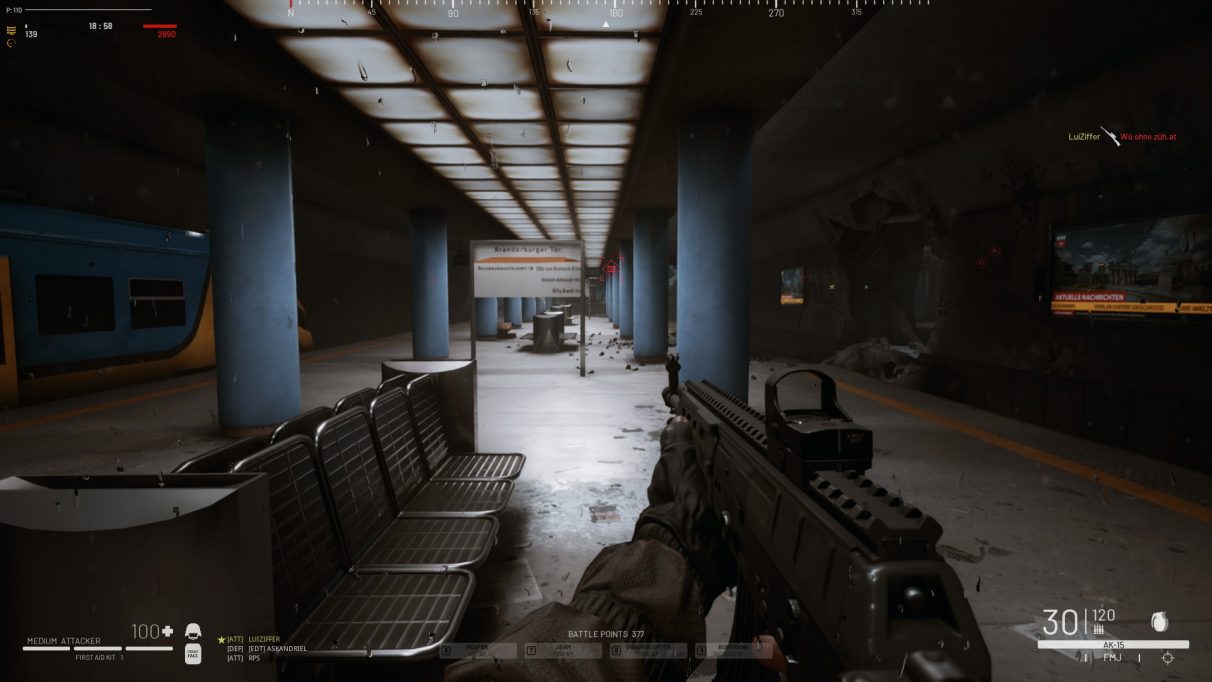 Someone dropped a first aid bag, I dumped some ammo behind a counter. I’d only just realised I could do that. We had a good view of the mall and lots of cover. The assault kicked off a moment later. Smoke grenades came through the front of the store, quickly followed by a hail of gunfire and cursing. One of them tried to get up the stairs behind us, but we had someone hidden behind some boxes, waiting for them. A few more minutes of that and we pulled out of the shopping mall - another objective needed reinforcements. We slunk through the corridors like seasoned infiltrators, not turning a single corner unless we knew exactly what was waiting for us, right until we got to the exit. We hadn’t counted on the tank. The squad scattered or died.

That kind of structured, cohesive experience is rare. The lack of voice chat means that nobody communicates, beyond swearing at each other in text, while the absence of direction and the huge size of the maps means that most people sort of just run around between objectives, basically just trying to play Battlefield. The fleeting nature of lives certainly supports that playstyle - death comes easily but is kind of meaningless. Matches are wars of attrition, with both sides flinging troops at objectives, but instead of manpower getting worn down, it’s my will to keep playing. 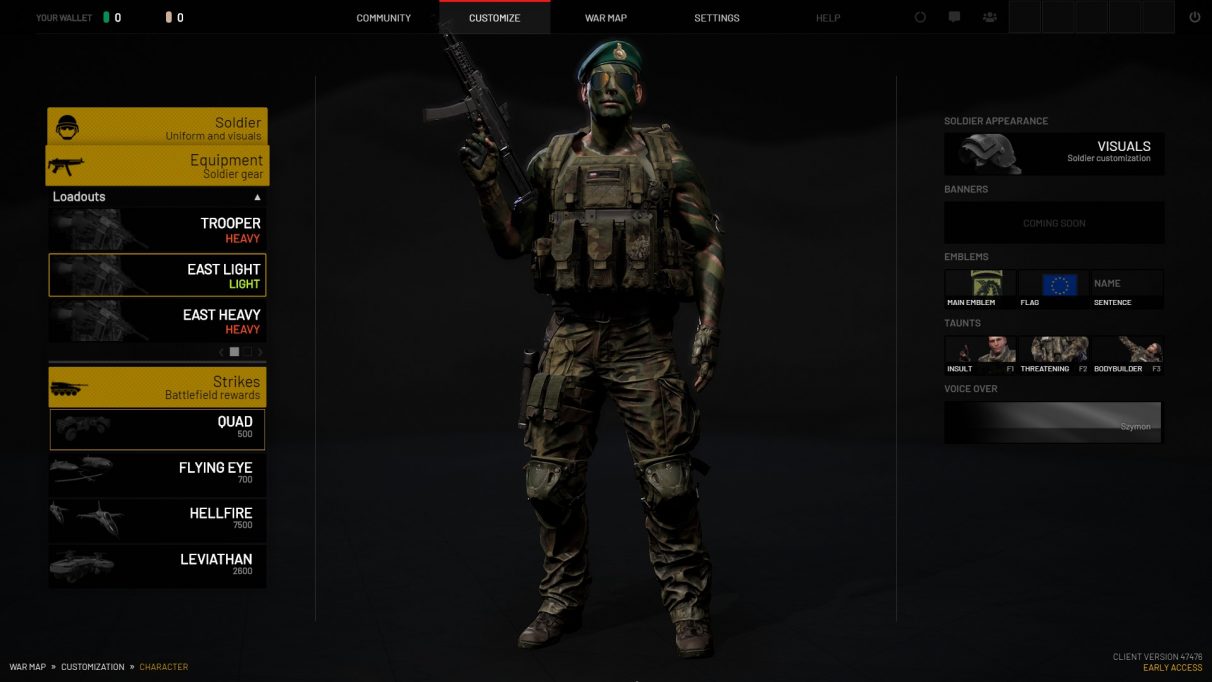 Fights drag on and are definitely less interesting for their lack of Battlefield’s illusory dynamism. There are no events or map evolutions beyond the objectives changing hands. These maps don’t tell a story, and the battles that play out in them aren’t very coherent. Even in a genre not exactly famed for is charismatic games, World War 3 is very grey, in tone as well as aesthetic.

Where it excels are the guns. Gosh, they’re corkers. First off, all of them are available straight away. No levelling up, no shopping - just jump in and start making a loadout. This is easier said than done, of course, and the gun details don’t paint a clear picture, so expect to play more than a few rounds before you find something that suits you. They’re all extremely customisable, too. I’ve been running around with a G38 that I’ve upgraded with two different optics: a scope on the top and iron sights at an angle, letting me quickly switch between close-quarters and ranged modes. You can slap lasers, torches, scopes and lots of aesthetic bells and whistles, too, so you have a piece of kit that’s distinctly yours. You can even pull it apart and gawk at each individual component. 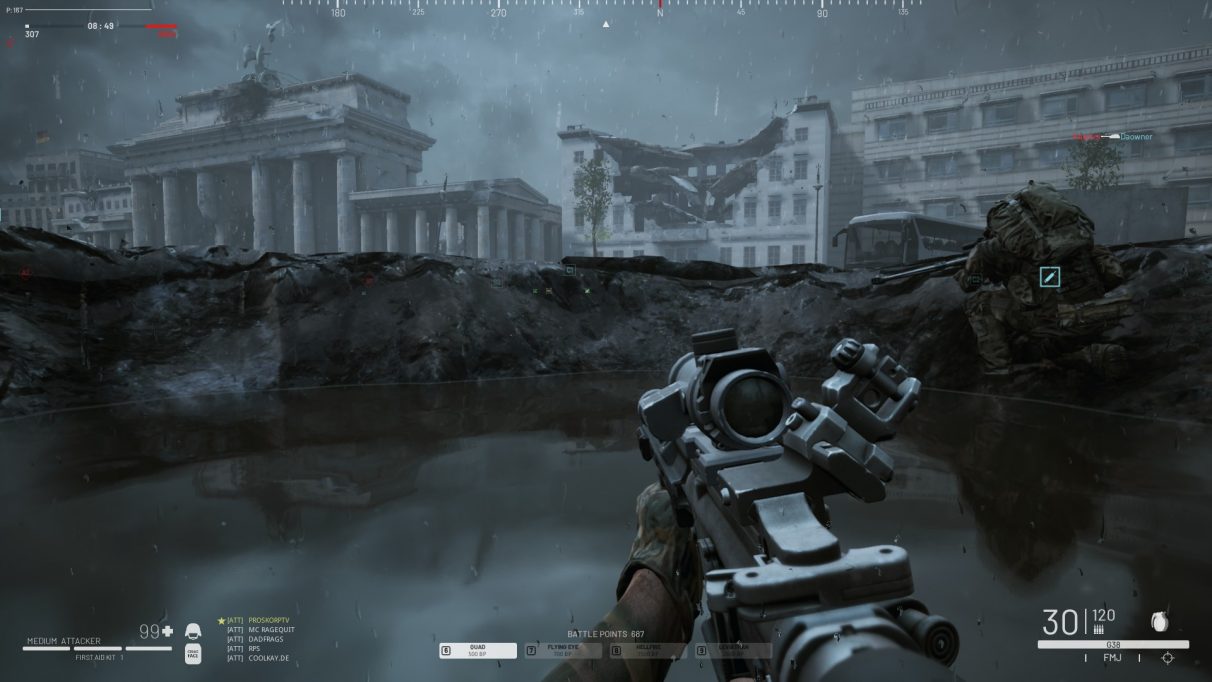 They’ve got some kick. I still keep having to remind myself about the recoil. There are ways to compensate, but it’s pretty dramatic, regardless. Each gun feels distinct, though, and even more different once you’ve slapped on extras and weighed it down. They feel like complicated, sensitive machines rather than just an extension of your character. With that in mind, I also like to carry around an RPG-7, guaranteeing at least some kills and wee explosions even if I’m a terrible marksman.

With the RPG and the custom G38, I was a bit bogged down. There aren’t conventional classes in World War 3, but there are weight classes. I was heavy, and it meant I wasn’t going to be quite as spry. This was a problem in a game that prizes speed. I had to make a sacrifice, but I couldn't give up my beloved RPG. The armour had to go. I was able to swap it out for something lighter and less durable, but honestly, I haven’t noticed. I get shot in the stomach a lot, regardless, which always seems to kill me. I die whether I’m encased in steel or not, while running away quickly has saved my life plenty of times. 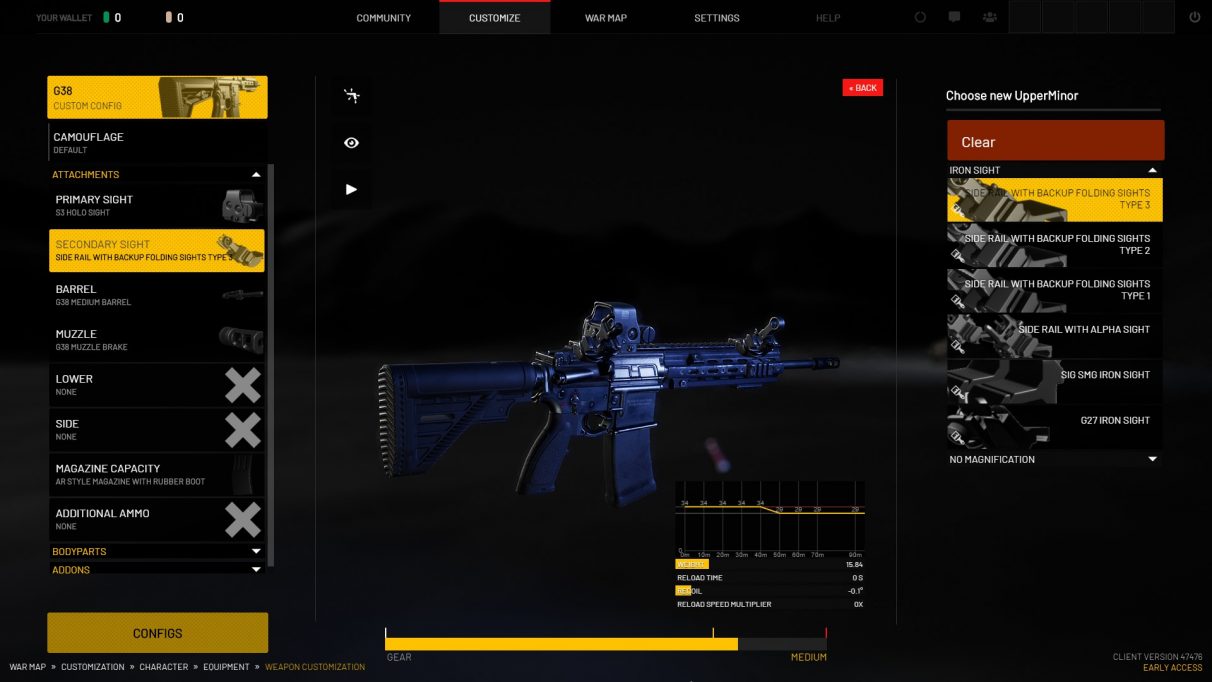 It’s definitely gun porn, which I’m never really sure about, but it’s also the only part of the game that made it worth powering through the stuttering and countless spawn deaths. World War 3 does this one very important thing extremely well, for the most part, but everything else needs a great deal of work. It’s hard to even predict its potential because it doesn’t have a clear identity yet. The hunger for grey military shooters can never be sated, so it’s already popular enough so that you won’t struggle to find a match if you can connect, but I recommend holding off for now.