Hey, you, do you have the procedurally-generated treasures of Strangethink Software safely downloaded and ready to go? No? Then grab them now, because they're great and Strangethink will soon remove the downloads. They previously pulled their older games, leaving only Secret Habitat, Joy Exhibition, Mystery Tapes, and These Monsters left until these too fade. That's one game where you explore art galleries, one where you paint your own art using weird sprayguns with unpredictable effects, one where VHS tapes change the world around you, and one exploring a monster museum. Lovely stuff. Don't miss out.

I am glad to hear from Strangethink again. They seemed to vanish, taking many traces of their work with them. Okay sure the reason they returned is to say even more of that will vanish, which is kinda bad news, but their reappearance renews my hope for more new Strangethoughts. They announced on Twitter this morning:

To explain #2 a bit, the (optional) Itch client has a big ol' "Install" button on pay-what-you-want games that skips the step of asking if you want to pay. Store pages inside the app do still show the option to name a price, but you need to look for that and the Install button is far more prominent. I would be surprised if Itch don't change that, given how much care they put into the store for developers, but it's currently a concern.

The enigmatic Strangethink has removed games before so do get in while you can. Some older Strangethink games have been down for ages. In fact, I didn't even know Secret Habitat had reappeared after being removed, so I'm delighted to nab it again on my latest PC. 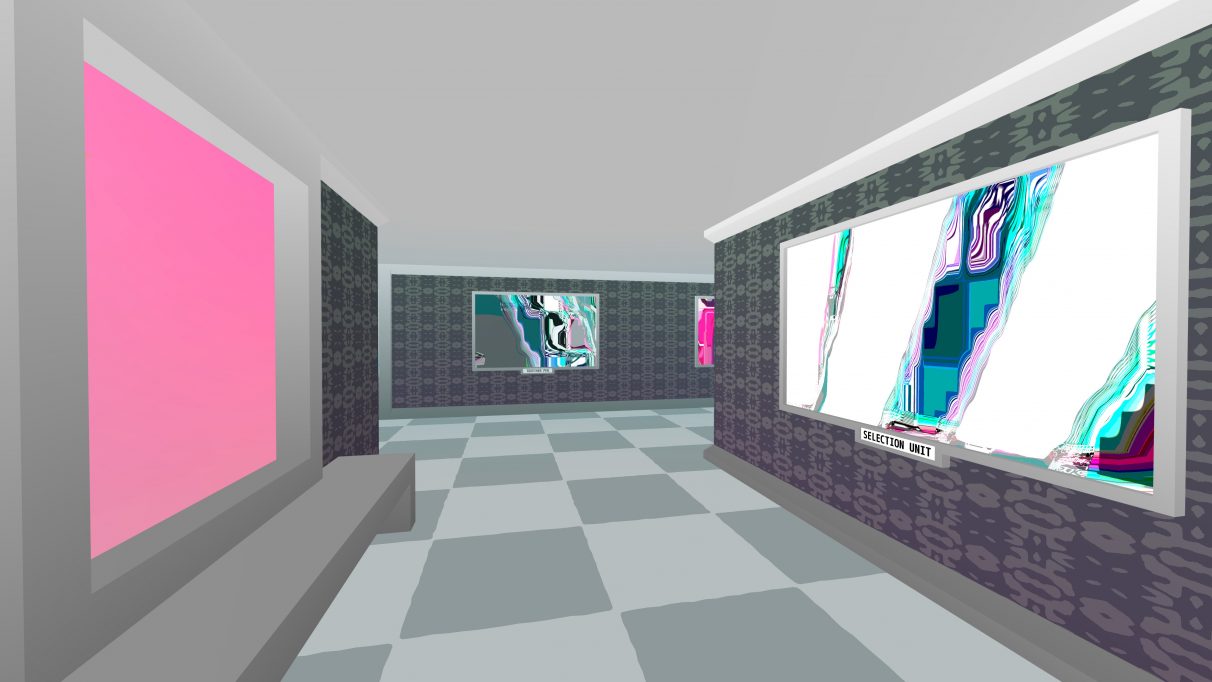 The island feels so very alien: neon water, blue fog, wibbly turquoise, trees, and too many stars in the sky. Then it's covered in art galleries full of art, algorithmic attempts to capture... something. The framing feels like an unsettling alien experiment. Then I'm distracted from that because I stumbled across an exhibition I really, really like, a room where painting and name and music combine to make something really special or unexpected. It's a place of great serendipity.

I've talked about the things I like before with an earlier version (the art-generating algorithms were later refreshed, I think):

Rewatching that now, I am reminded that I once fell down a hole of weird voices for videos. If you'd prefer written words, the whole gang had a chat about Secret Habitat when we named it one of our favourite games of 2014.

I'm up for the potential "remastered versions" of these games that Strangethink mentioned. Even just updating the procedural guts could make a huge change. Returning to Secret Habitat today, I got the feeling that its algorithms had been reworked since my last visit, with the music in particular having more instruments and hotter riffs than I remember. I think? I was thrilled by the hot jazzy double bass I heard in one gallery. With procedural generation, it can be hard to tell exactly what's new and what's an unfamiliar permutation.

Head on over to Itch.io to download Secret Habitat, Mystery Tapes, Joy Exhibition, and These Monsters while you still can. They're all pay-what-you-want with no minimum.