Corporal Yuen has the honour of firing the first shot in 2019's communal Combat Mission marathon. Moments after scrambling onto the flat roof of one of Camp Geiger's single-storey barracks buildings, the young Marine Javelineer spots and engages an enemy tank manoeuvring in the marketplace to the east.

(Quitting Qatab is an open-to-all game of Combat Mission: Shock Force 2 in which NATO forces are orchestrated by commenters while Qatabi units are computer controlled. For a scenario outline click here) 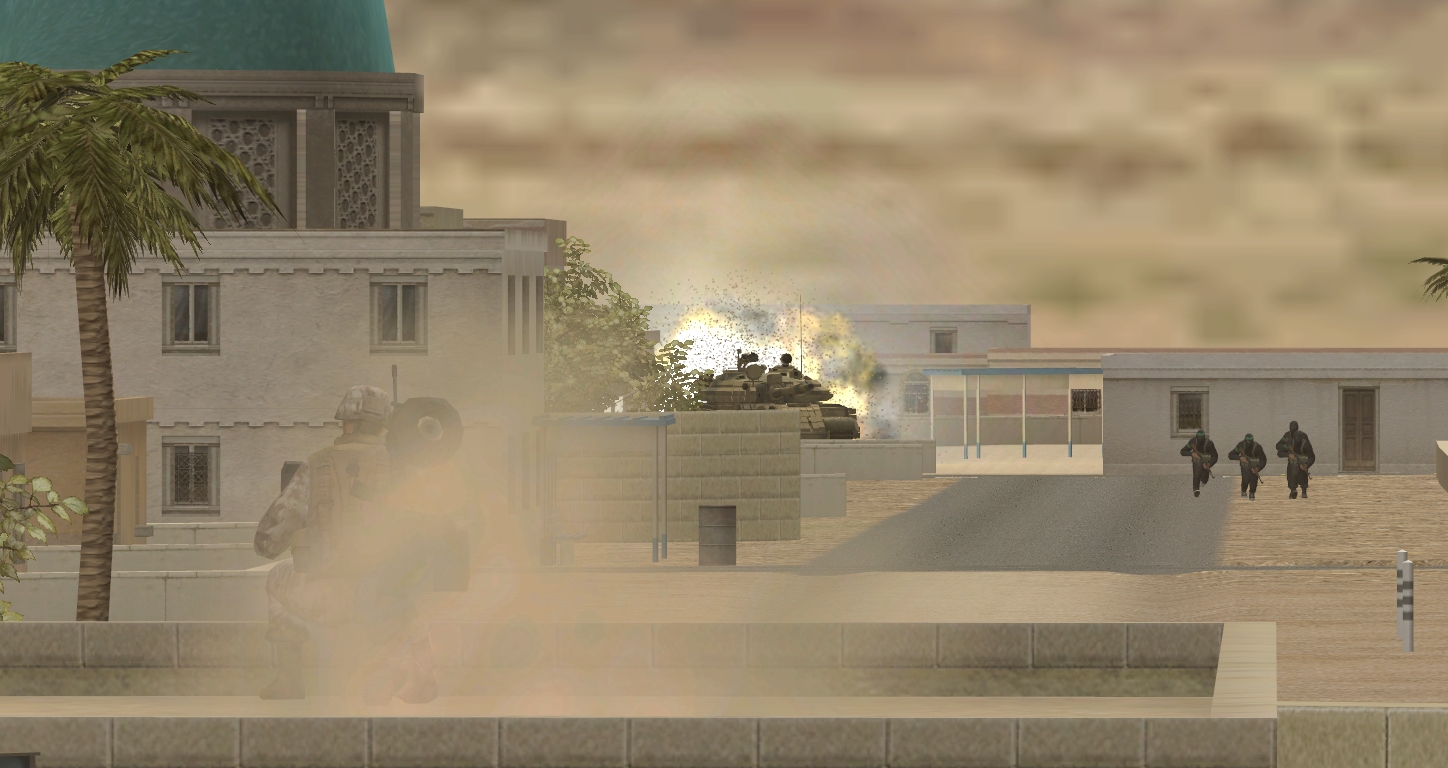 Scribing a vaporous parabola in the hazy morning sky, the fire-and-forget missile plunges purposefully onto its prey. Yuen utters an evergreen Anglo-Saxon expletive when the swirling dust clouds part to reveal a burnished but unperturbed T-62 (?). Long before he's had time to reload, the target has scuttled into the lee of the mosque and disappeared.

The Javelin team switch weapons, turning their attention to a group of black-clad figures advancing smartly down the road. Harassed by the emissions of two grenade-launcher equipped M16A4s, the attackers follow the example of the tank, melting into the scenery north of the road.

Yuen is far too busy to notice the three vehicles exiting the compound. Using a gap in the southern wall, Willy the Wiesel and Deathproof the AAV (with Metzger's assault/anti-tank squad aboard)  make for a grand two-storey residence on the edge of the racecourse.

Willy's journey is incident free. Deathproof has an unexpected disagreement with a ditch and finishes the turn shuttling and wiggling in a frantic effort to de-bog.

Brassy Bayou Belle leaves Camp Geiger through the eastern gate. Reaching her destination (w38) in seconds, she disgorges the thirteen men of 1 Squad who dash for the cover of the nearest house, glimpsing en route an enemy IFV rolling westward along the riverside road. Armed with several single-shot AT4s Iverson's men are perfectly capable of dealing with the armoured threat. Bayou Belle, on the other hand... 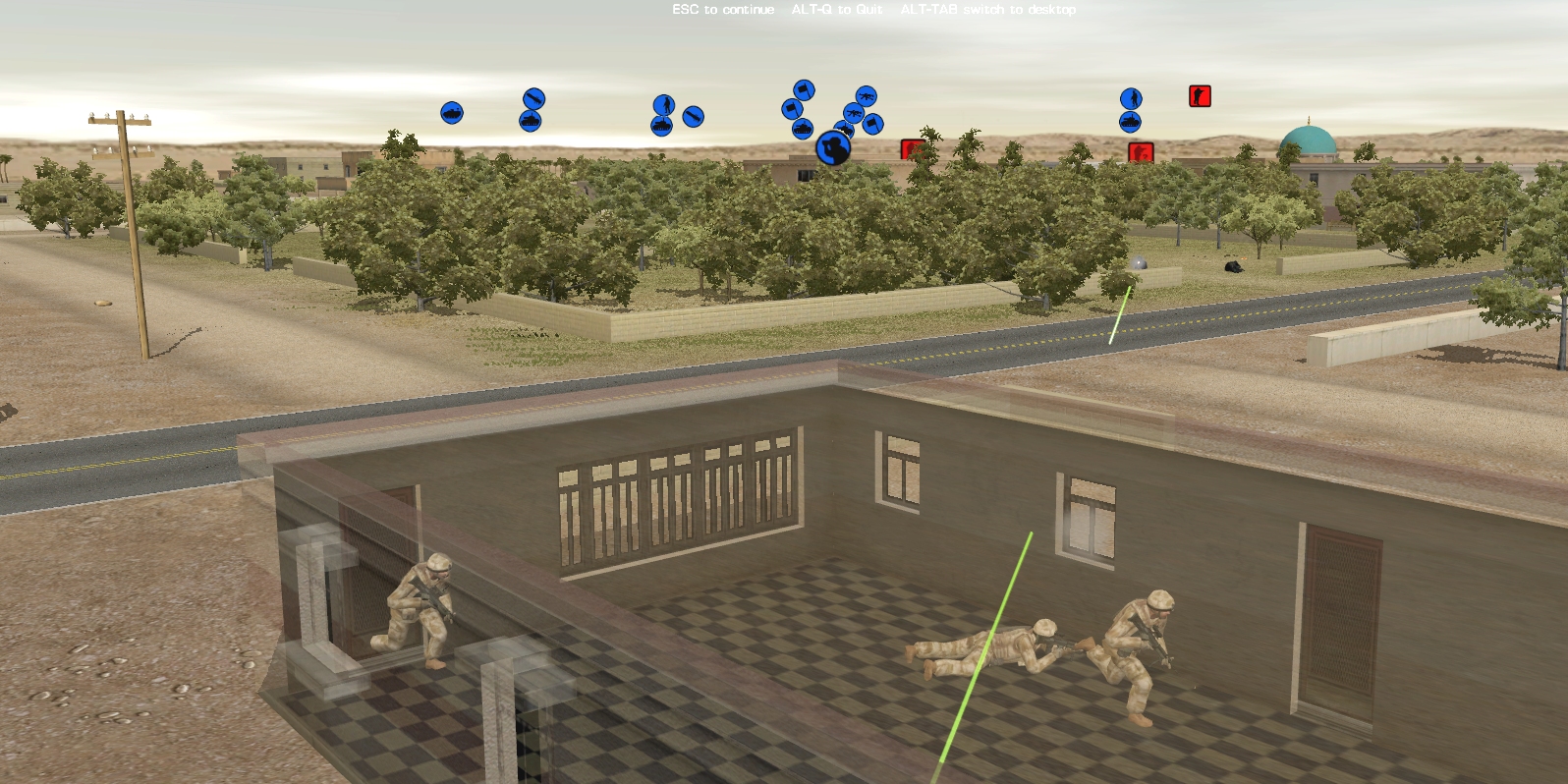 Turn #1's only sustained firefight occurs close to the blazing Land Rover Wolf. Spotted as they head indoors, the three singed Brits are subjected to a storm of automatic fire from the park across the road. They reply in kind and for a spell that corner of the map is etched by ricocheting tracer rounds. Somehow the flurry of lead claims no victims and by the sixty-second mark both sides have ceased firing and appear to be considering their options.

Their ears ringing from the Javelin detonation, the sniper team spend much of Turn #1 scoping an AT team on a nearby rooftop.

The situation at the end of Turn #1:

^ There's now plenty of evidence to suggest that an attack on the base is underway.

^ It looks like an AFV may be heading our way from the direction of Al Faq. The heli crew can see nothing of interest from their current position. 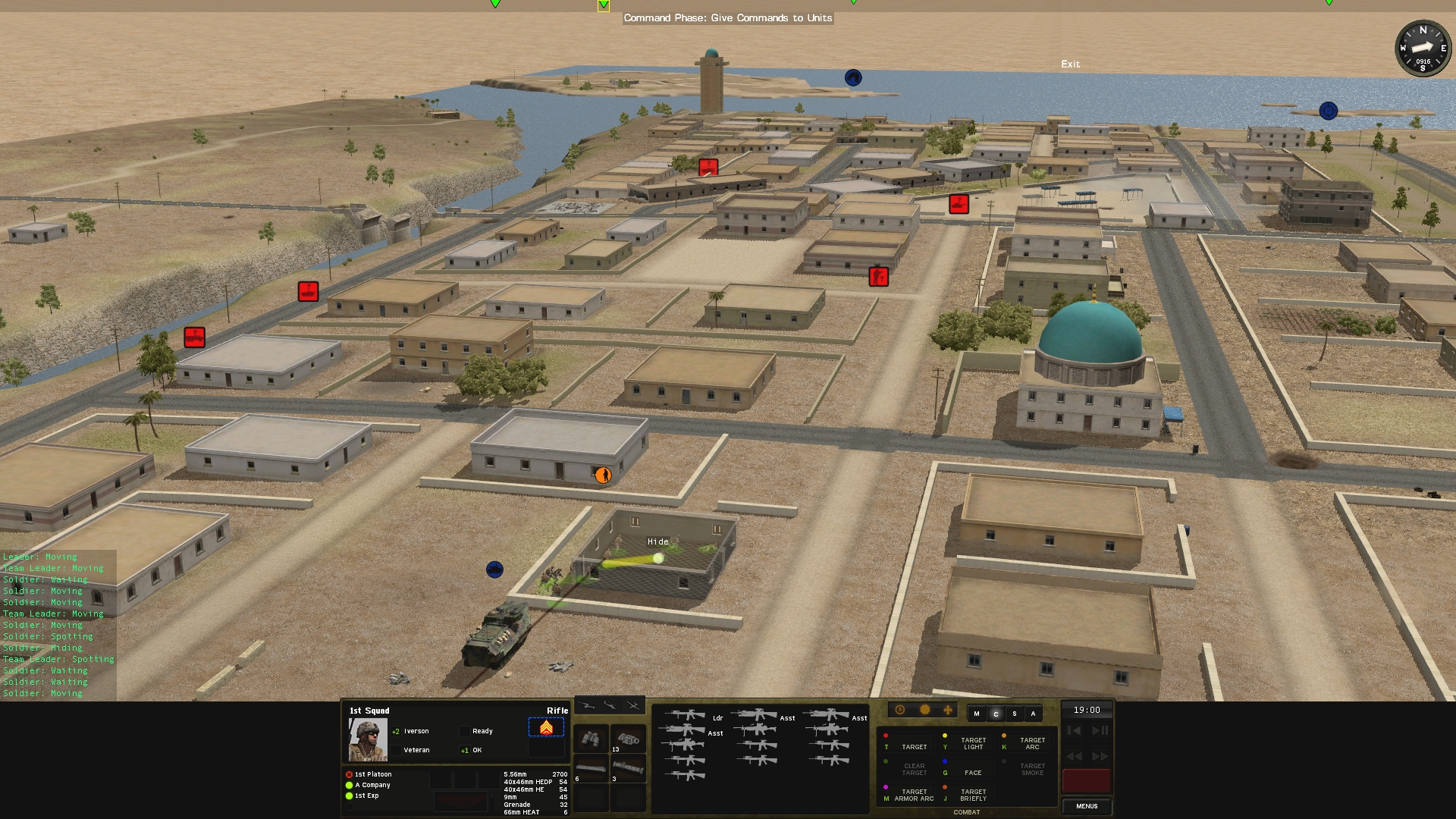