Triskaidekaphobia is a luxury the time-poor Comment Commanders can't afford. With the scenario deadline (turn 20) hurtling towards them like an RPG-7 with a Wiesel to catch, the fleeing peacekeepers spend minute #13 hunting three foes who, they believe, simply have to be eliminated before a dash to South Beach can be contemplated. Do they manage to remove the roadblocks? You'll never know unless you click where it says “Read the rest of this post”. 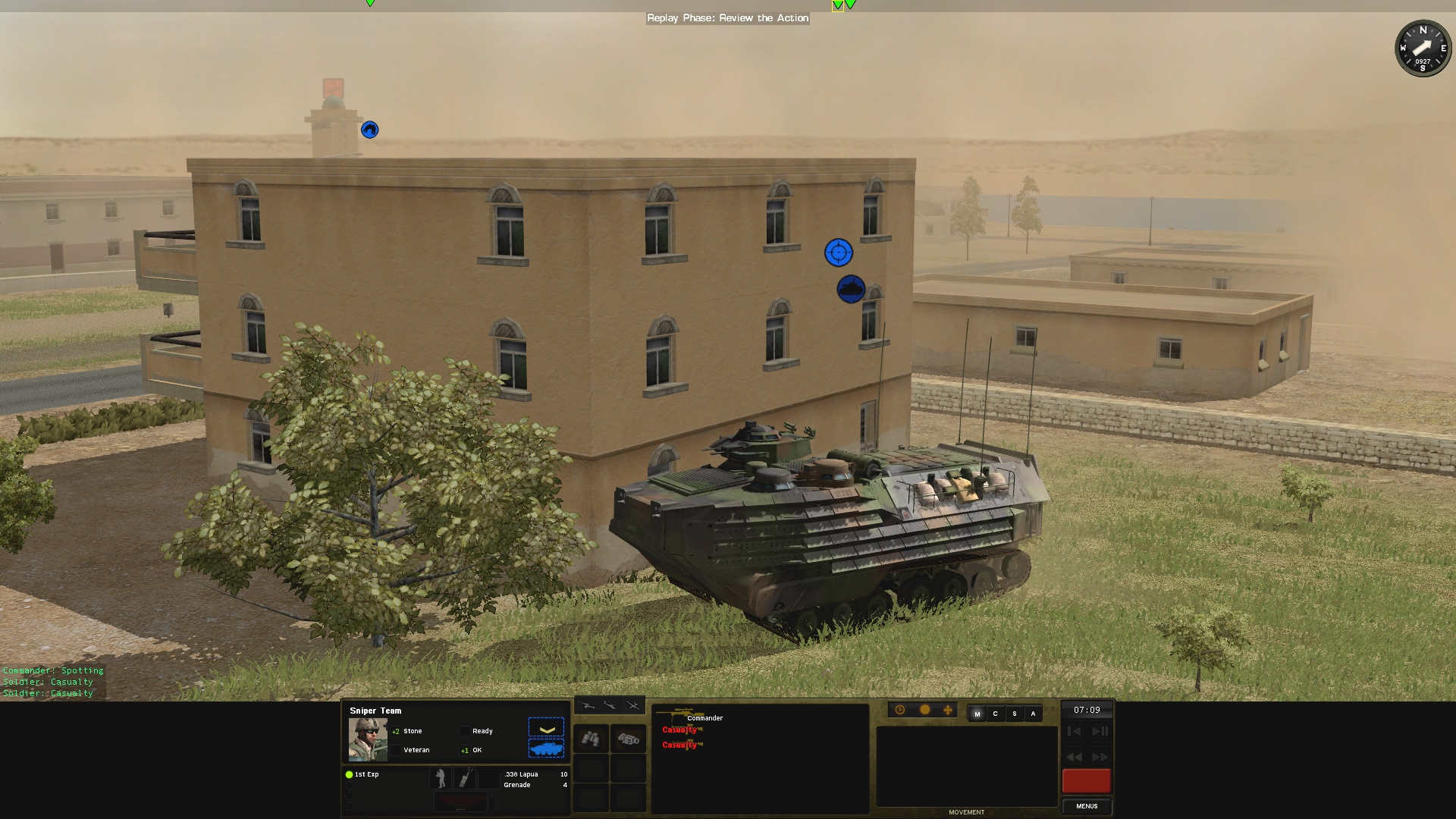 Cunningly positioned in a ditch near the coast, the AT-14 missile slinger would have found itself the focus of a two-pronged attack had Stone (no relation), our sniper, obeyed his order. Because the wounded marksman refuses to exit Ample Annie and race to the rooftop of the building pictured above, the job of silencing the enemy's tripodal tank trasher falls to our recon tank alone.

After broadcasting a crescent of smoke grenades in an effort to screen Deviator (the foolhardy AAV), the Scimitar throws caution to the shamal and boldly advances.

The sudden acceleration surprises an unseen grenadier (?) in the vicinity of redw44, causing him to bungle his shot. 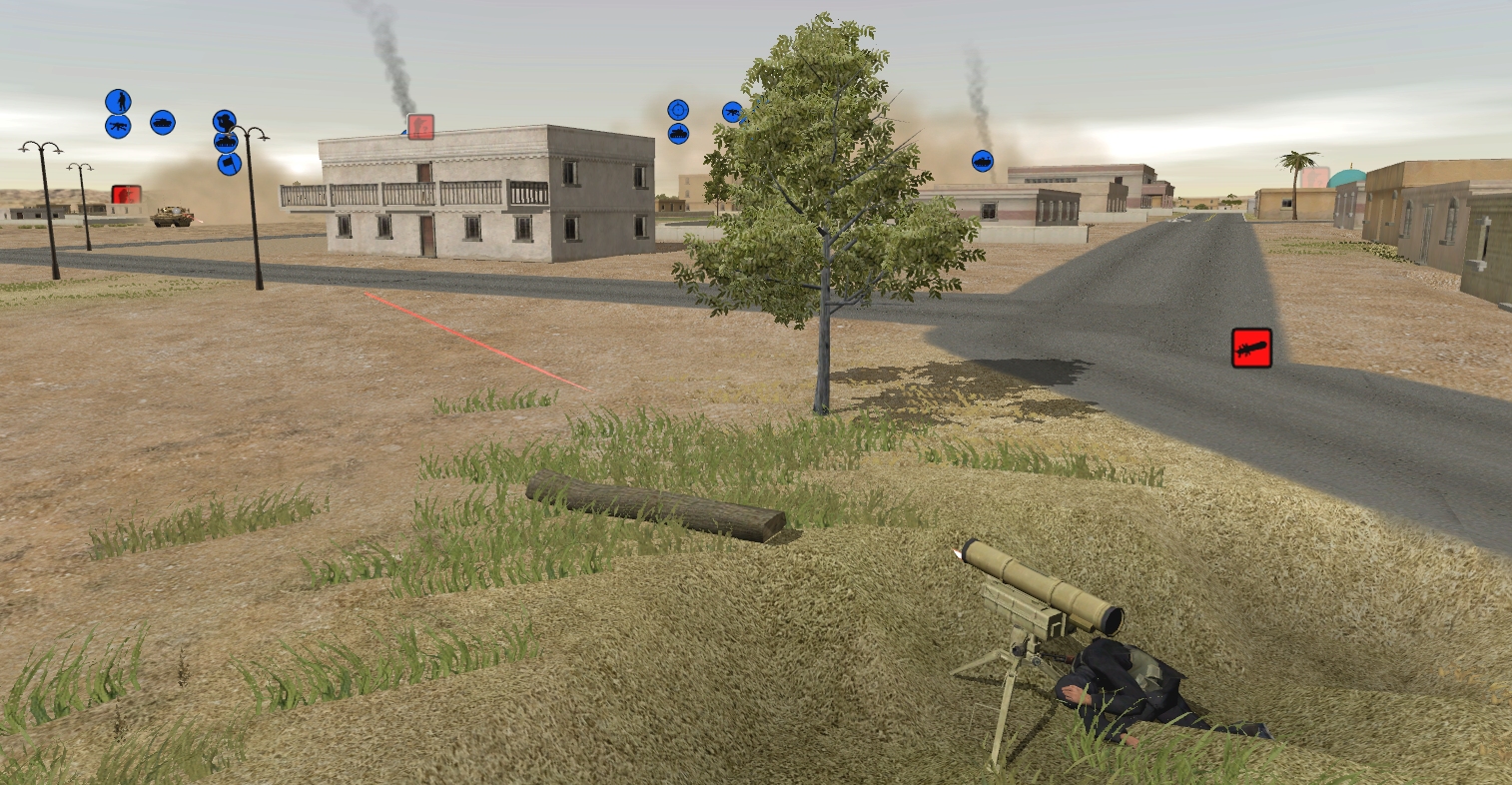 Hunter and quarry spot each other at roughly the same moment, but it's the British gunner who is quickest on the draw. 30 mm autocannon shells and co-axial MG bullets coax a caravan of angry dust devils from the weedy earth bank shielding the Spriggan. The Qatabi AT-14 operator decides braving this hellstorm is beyond his pay grade and flattens himself in the bottom of the ditch.

He's still cowering at T+28 – the moment the distracted Scimitar is clouted by an RPG presumably fired from the same rooftop as the earlier one. I wait resignedly for red crosses to bloom over the dust-wreathed tank, but none appear. It looks like the bijou British AFV was saved by its slat armour.

The bruised (minor track damage) Scimitar is still raking the suppressed AT-14 at the end of the turn. Surely a KO must be imminent. 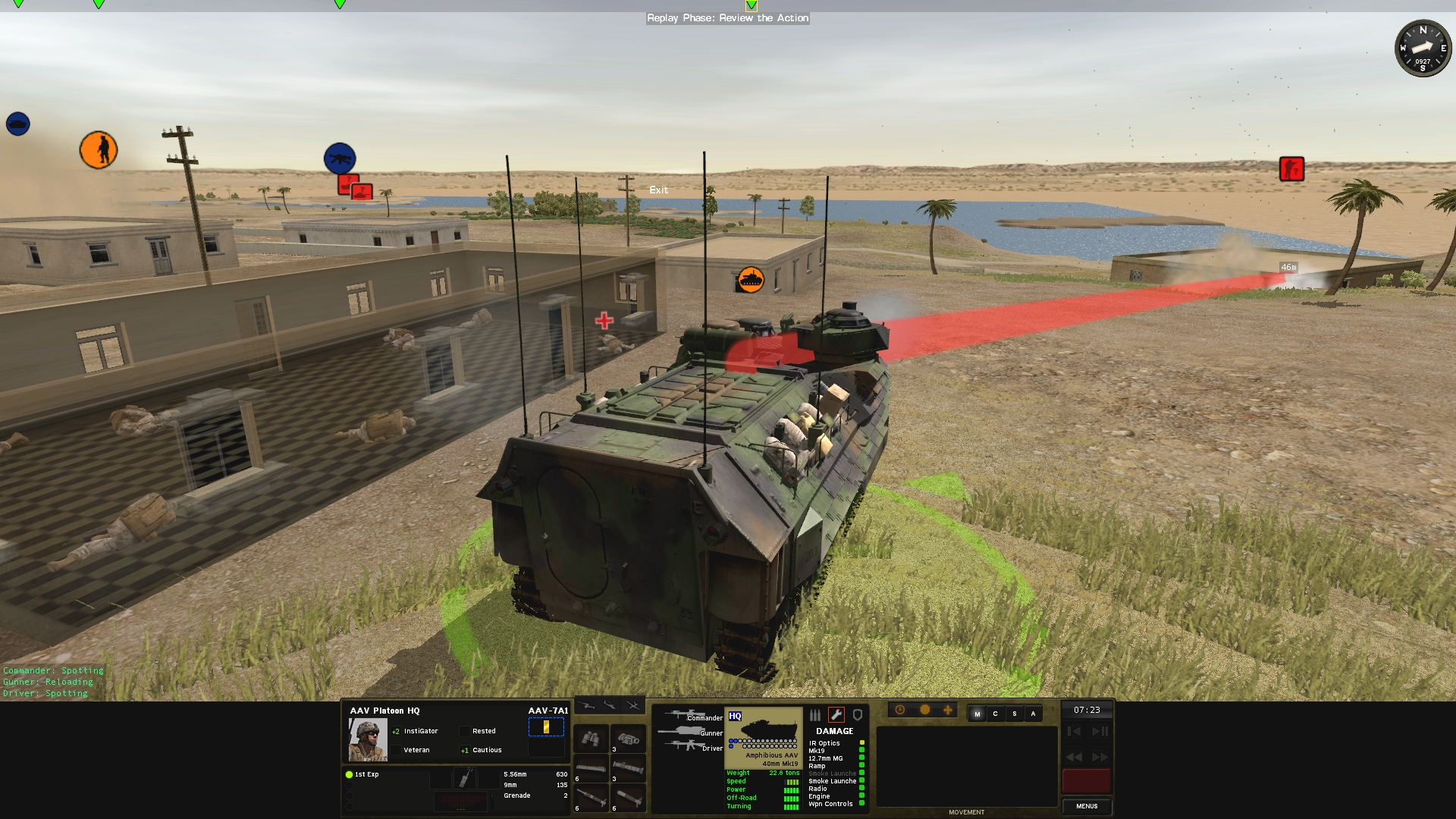 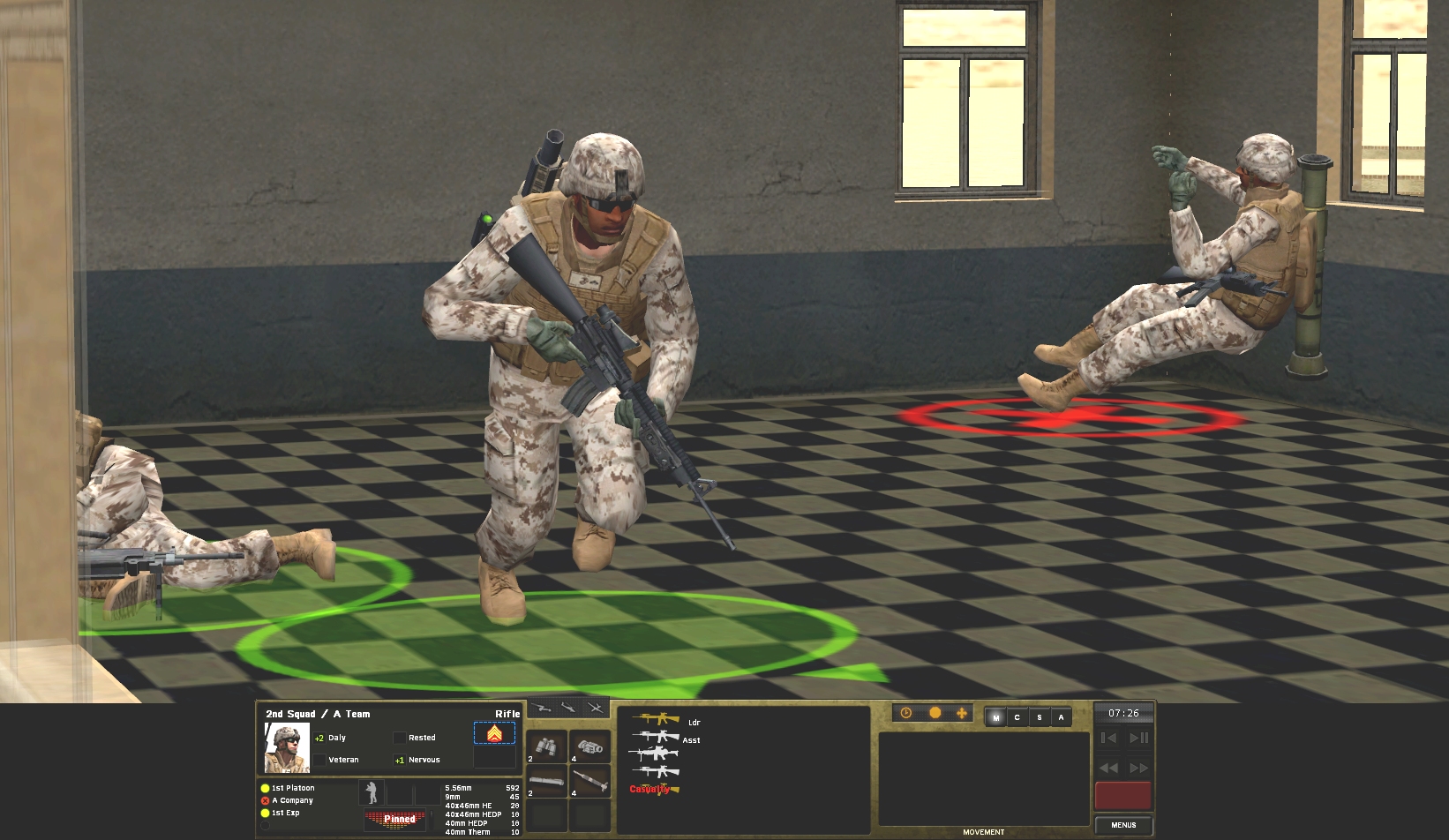 It's hard to tell how many of the occupants of the beachhouse survive turn 13. Pounded by the hastily repositioned Deviator, half of 2nd Squad, and one of 4th Squad's MG teams, it's hardly surprising fire from redp79 dwindles as the turn proceeds. What does elevate eyebrows and focus the mind, is that the Qatabis by the beach manage to fell an in-cover Marine (one of Daly's men) despite the heavy suppressive fire.

The only truly decisive engagement of the turn occurs in the farmland west of the beachhouse. A steady stream of lead and 40mm grenades distracts the game grenadier at redf84, allowing Sigler's subordinate to relocate unobserved. 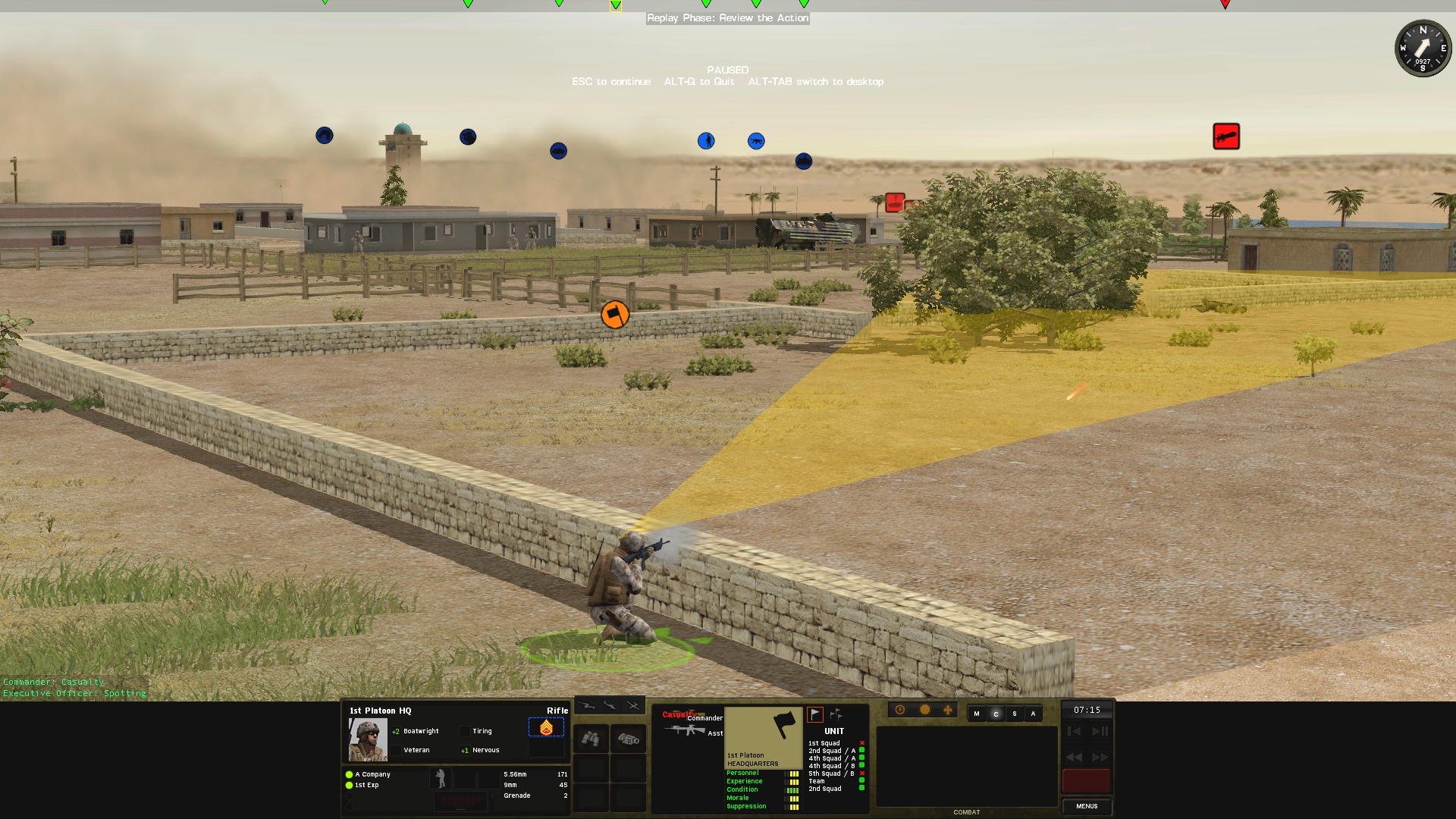 When Staff Sergeant Boatwright opens fire with his M16A4 from a new vantage point further south, his target is in the process of changing SMG mags. The bursts pepper the prostrate figure. Sigler's killer will pose no more problems. 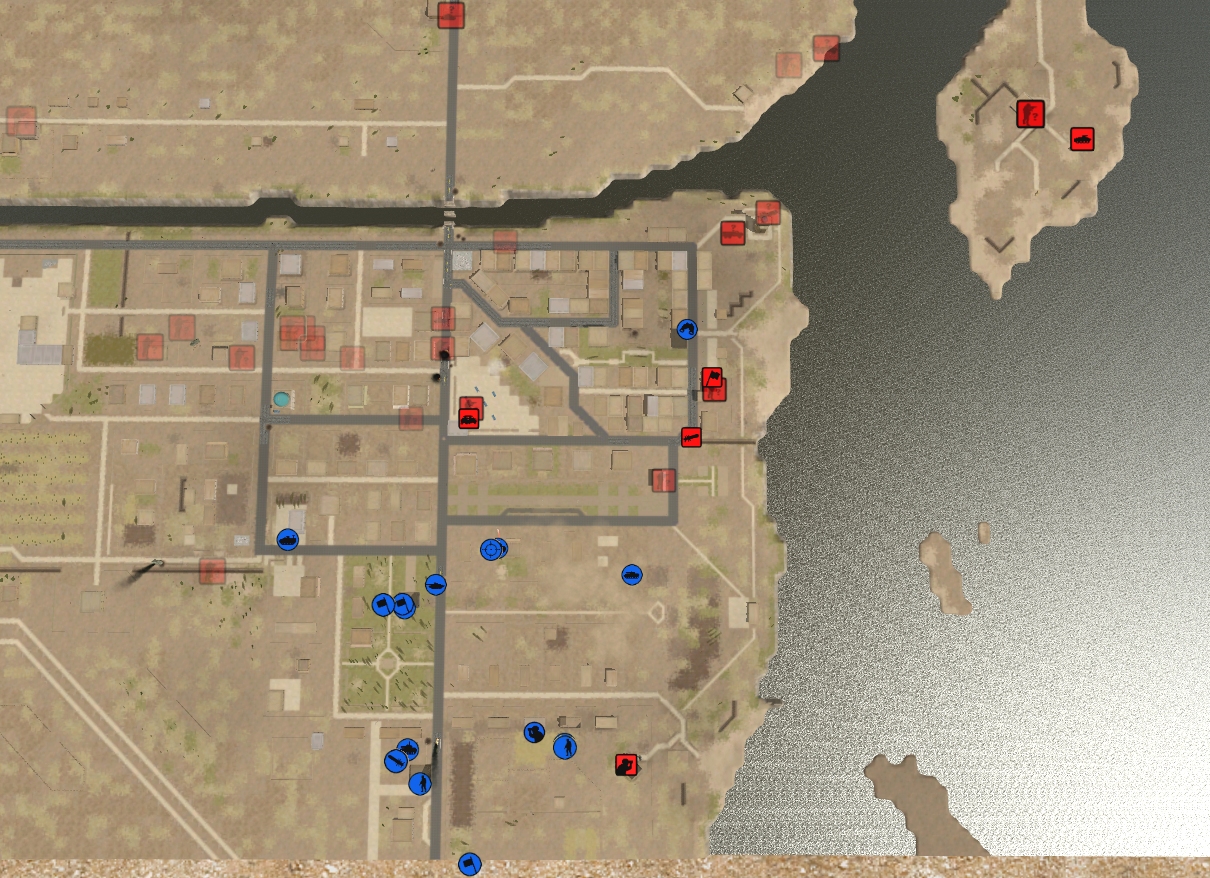