A close encounter with a Javelin missile hasn't dulled the aggro appetite of the marketplace T-62. At the start of Turn #2 the Soviet bruiser guns its 580hp diesel engine and sets off, like a bat out of Heliopolis, in the direction of Camp Geiger. The road it's chosen will take it right past a house occupied by 1st Squad - thirteen Marines led by Sergeant Iverson. Fireworks and flesh wounds seem inevitable.

Iverson's squad and its wheels, Bayou Belle, aren't going anywhere this turn. Several Comment Commanders suggested moves yesterday but as no-one explicitly issued an order, the two units decide to sit tight behind a curtain of popped smoke designed to screen them from flank attacks. That curtain is still forming when an enemy vehicle appears on Bayou Belle's 1 o'clock.

Fortunately, its not the previously glimpsed IFV but a 21st Century portee. BB reacts quickly, plastering the surprised technical with 40mm grenades. One enemy gunner topples from his perch before billowing smoke breaks LoS. 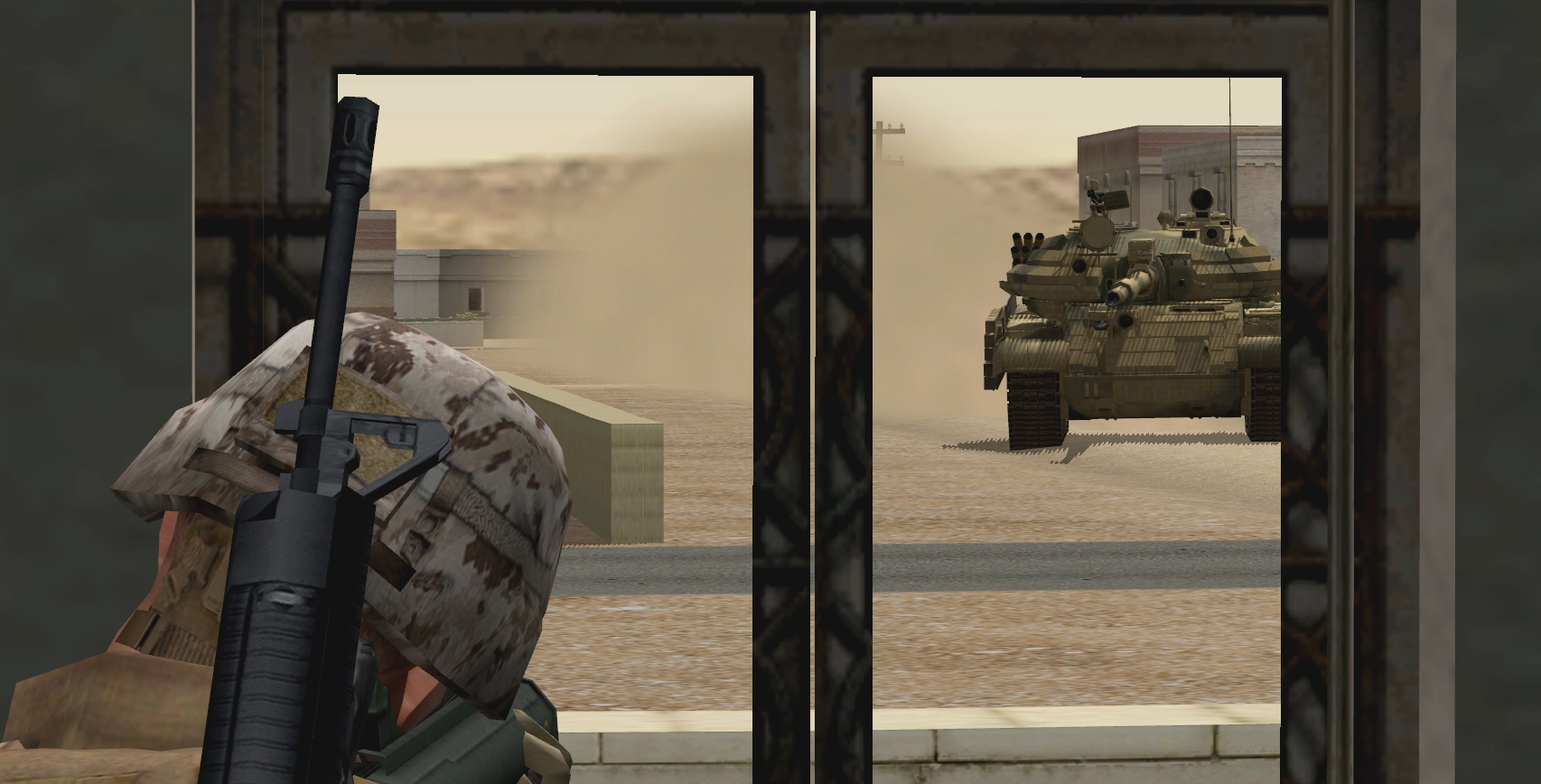 The motoring T-64 is about 70 metres from 1st Squad's crowded billet when it collides with the first of three flawlessly delivered 66mm unguided anti-tank rockets. 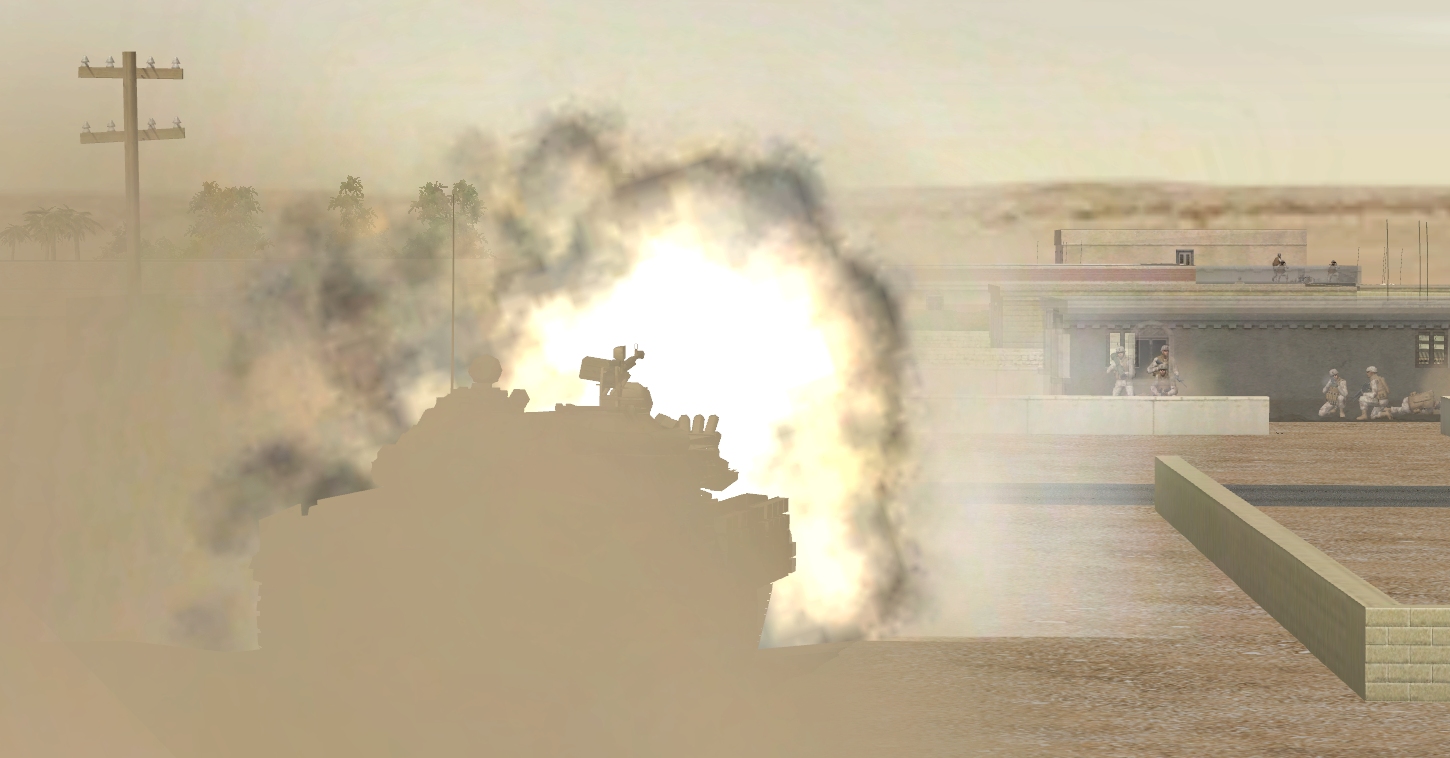 The attack is so quickly executed, and the resulting dust and smoke clouds so soupy, it's impossible to tell whether the giant has been saved by its mosaic of reactive armour. It doesn't return fire or move during the remainder of the turn which is encouraging. 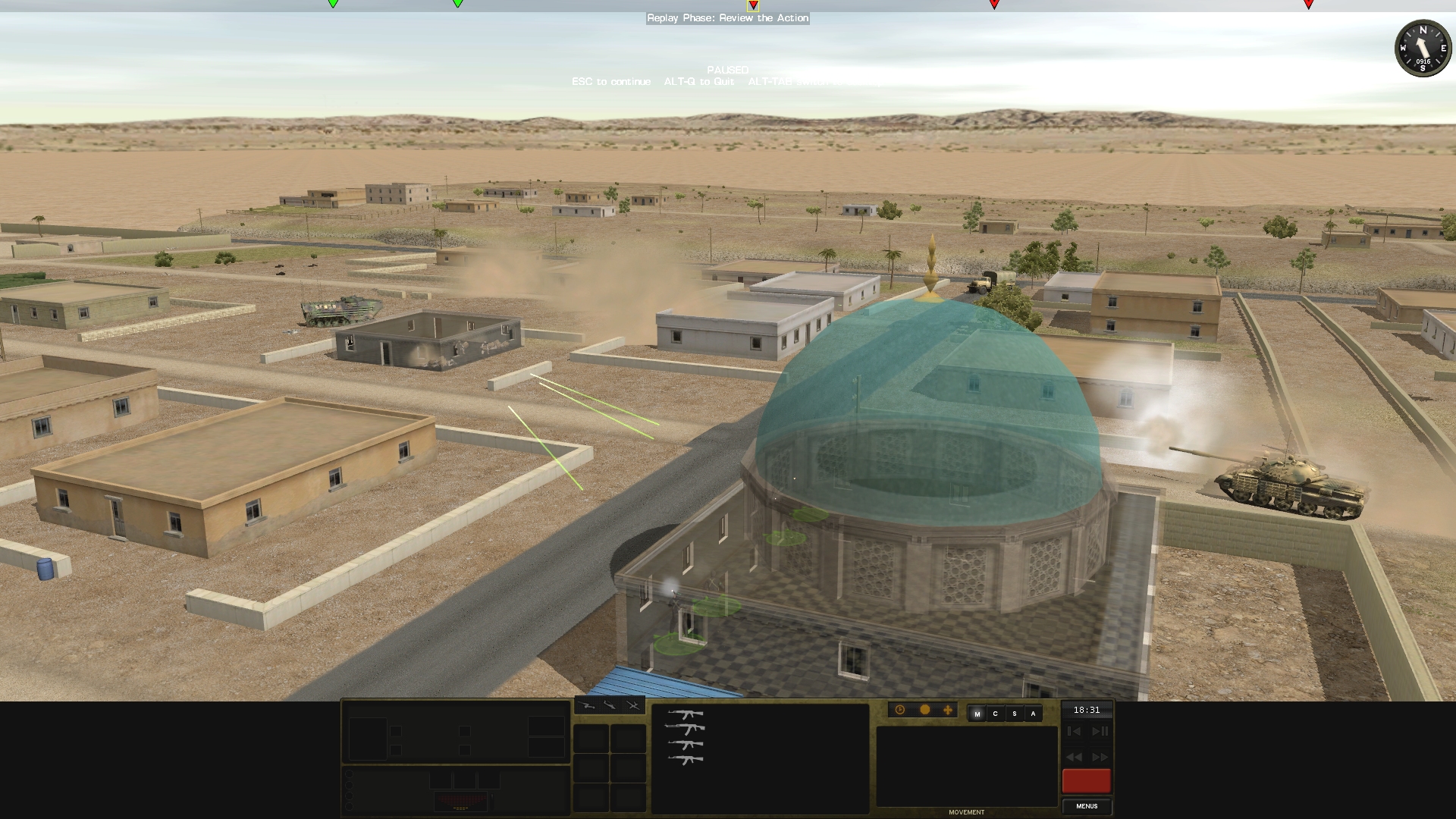 While the T-64 might be too shocked or grievously wounded to retaliate, the LAW attack doesn't go unanswered. Moments after the ambush has been sprung, the ambushers find themselves under withering close-range fire from the second storey of the mosque. Despite prompt suppressive fire from the MG and Javelin teams at Camp Geiger, and Ample Annie at o53 (She's just dropped-off Daly's squad) Iverson's men are soon pinned. One incoming round finds flesh unprotected by body armour. The peacekeepers have sustained their first casualty.

On their way to the lighthouse the Dutch aviators notice a green MBT tucked behind an abode on the north side of the river. 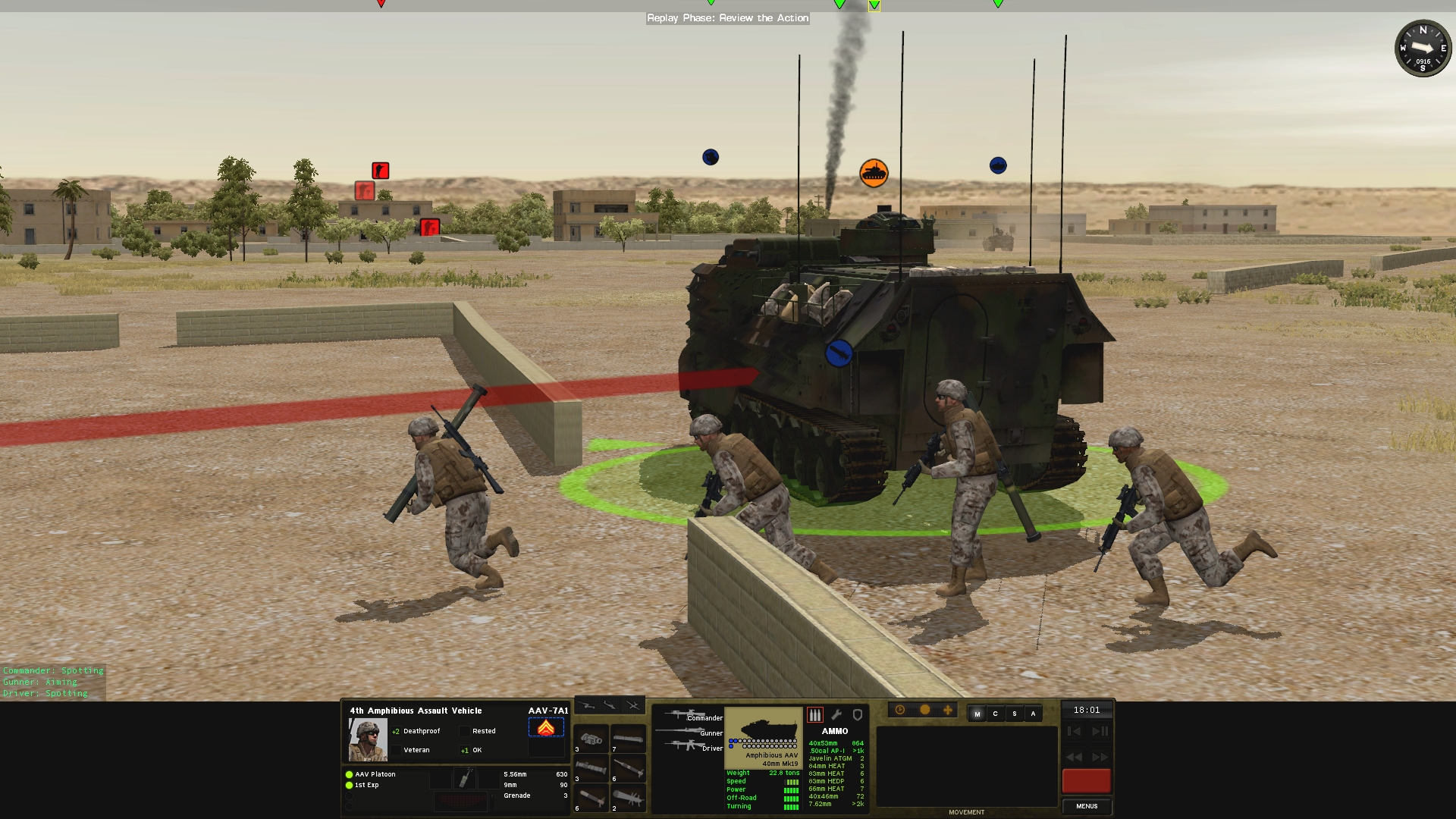 Deathproof's frantic fidgeting finally pays off. She extricates herself from the ditch, arriving at her destination near the racecourse house in time to disembark Metzger's AT outfit. 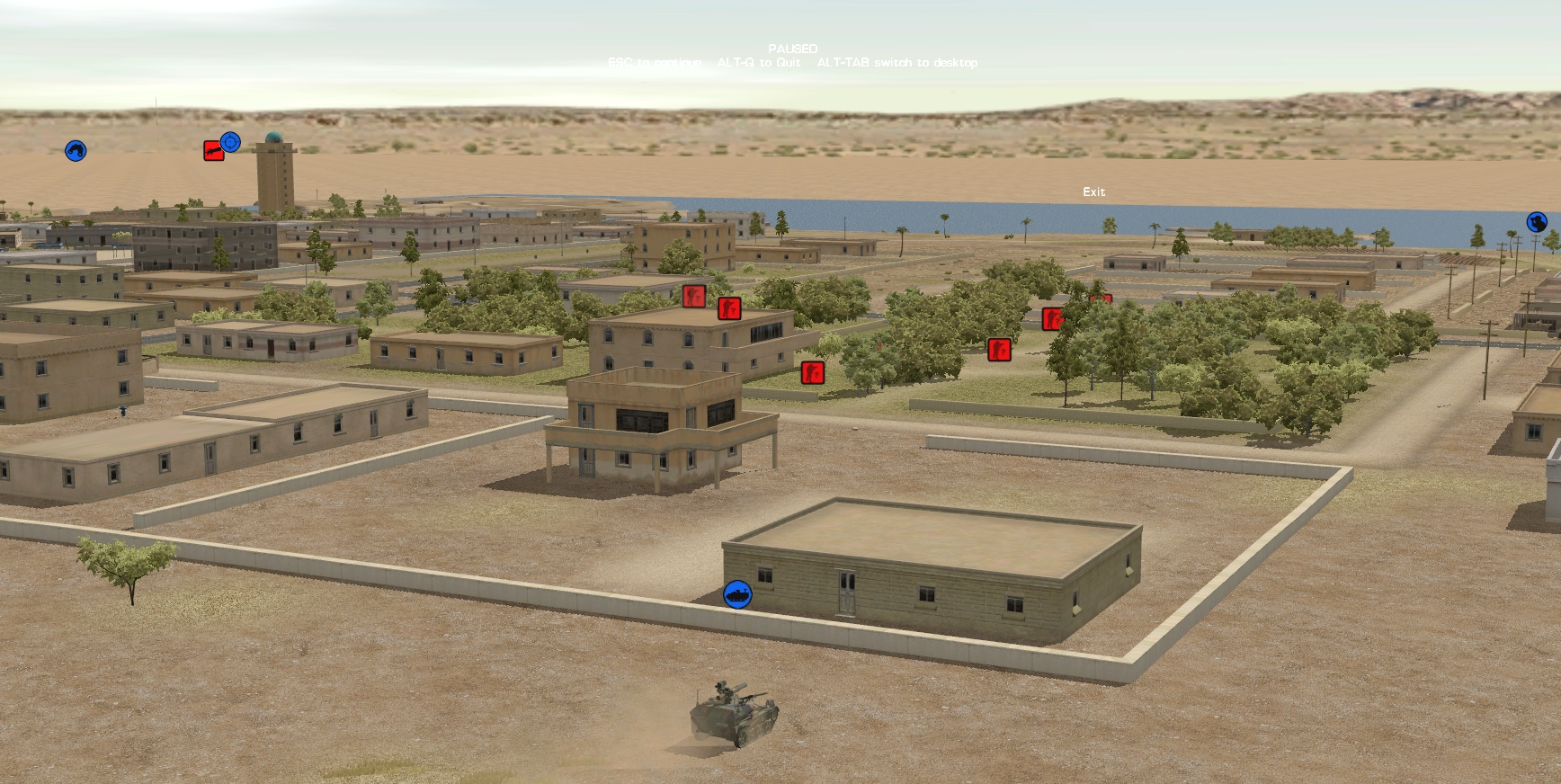 Willy Wiesel survives his recon ramble. On the way to D74 the dinky German AFV observed several Qatabi infantry units moving north-westward in the area of the park.

A truck is glimpsed near to the Last Known Addresses of the technical and the IFV. 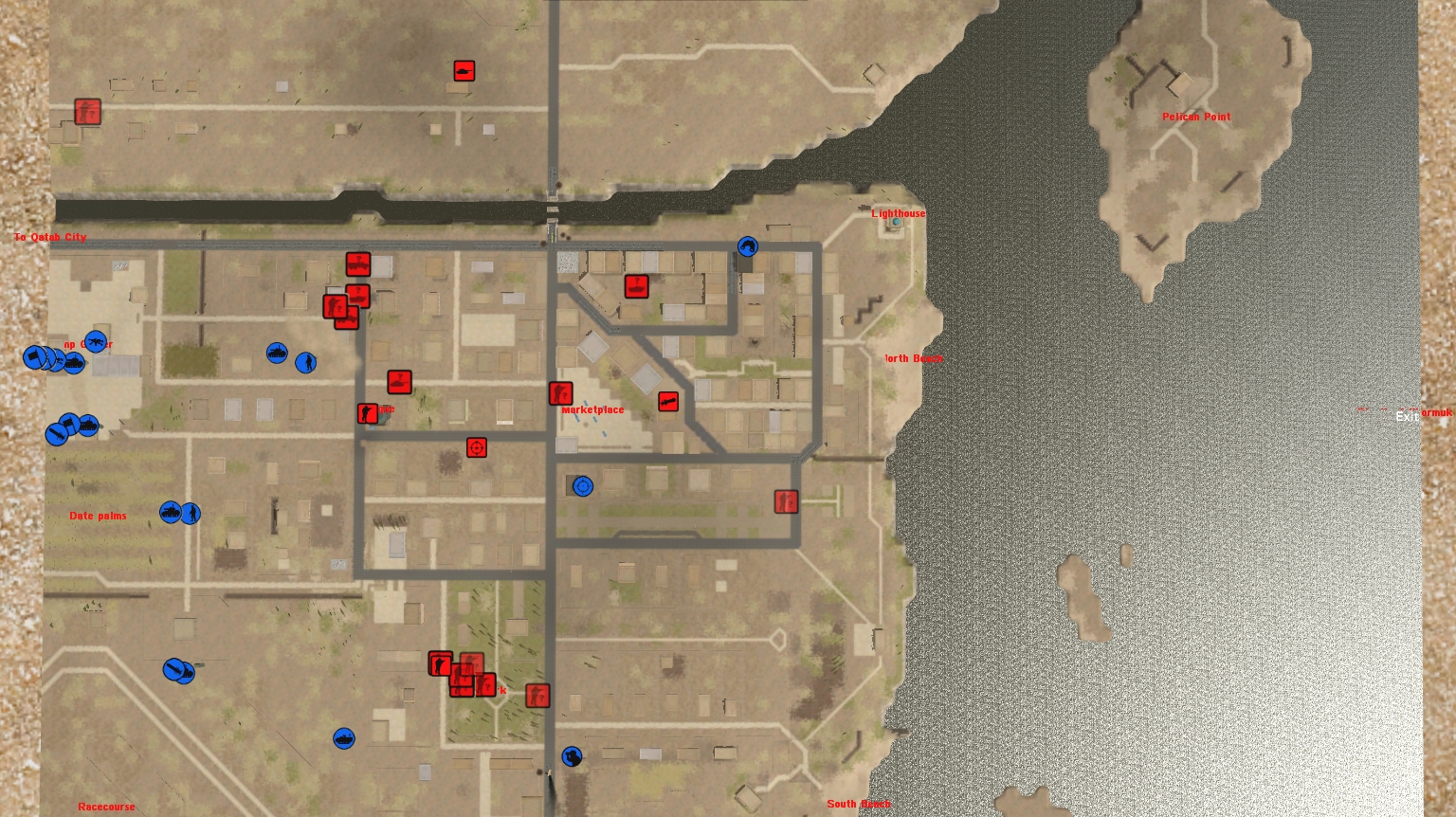