Passive spectators since the scenario began, Stone's (no relation) sniper team switch from watching and waiting to scotching and baiting at the start of turn #3. Relocating to rooms on the west side of the three star Hotel Lux, they open fire on a pair of Qatabi marksmen who are hurrying westward to participate in the pacification of Camp Geiger. Both enemies fall before reaching safety.

(Quitting Qatab is an open-to-all game of Combat Mission: Shock Force 2 in which NATO forces are orchestrated by commenters while Qatabi units are computer controlled. Each daily turn covers one minute of action. For a scenario outline and summaries of earlier turns, click here).

The only other hostiles felled this turn are cut down by the cubist MG of Willy the Wiesel. As the pint-sized Panzerjäger reverses southward, it notices several Qat infantry units moving in the direction of the NATO base.

On reaching its destination, one of the Wiesel's crew unbuttons and sets about disrupting the foe flow with his MG 42 descendent.

The laced-with-crimson lead stream stops at least one enemy fighter from reaching the row 61 ditch. 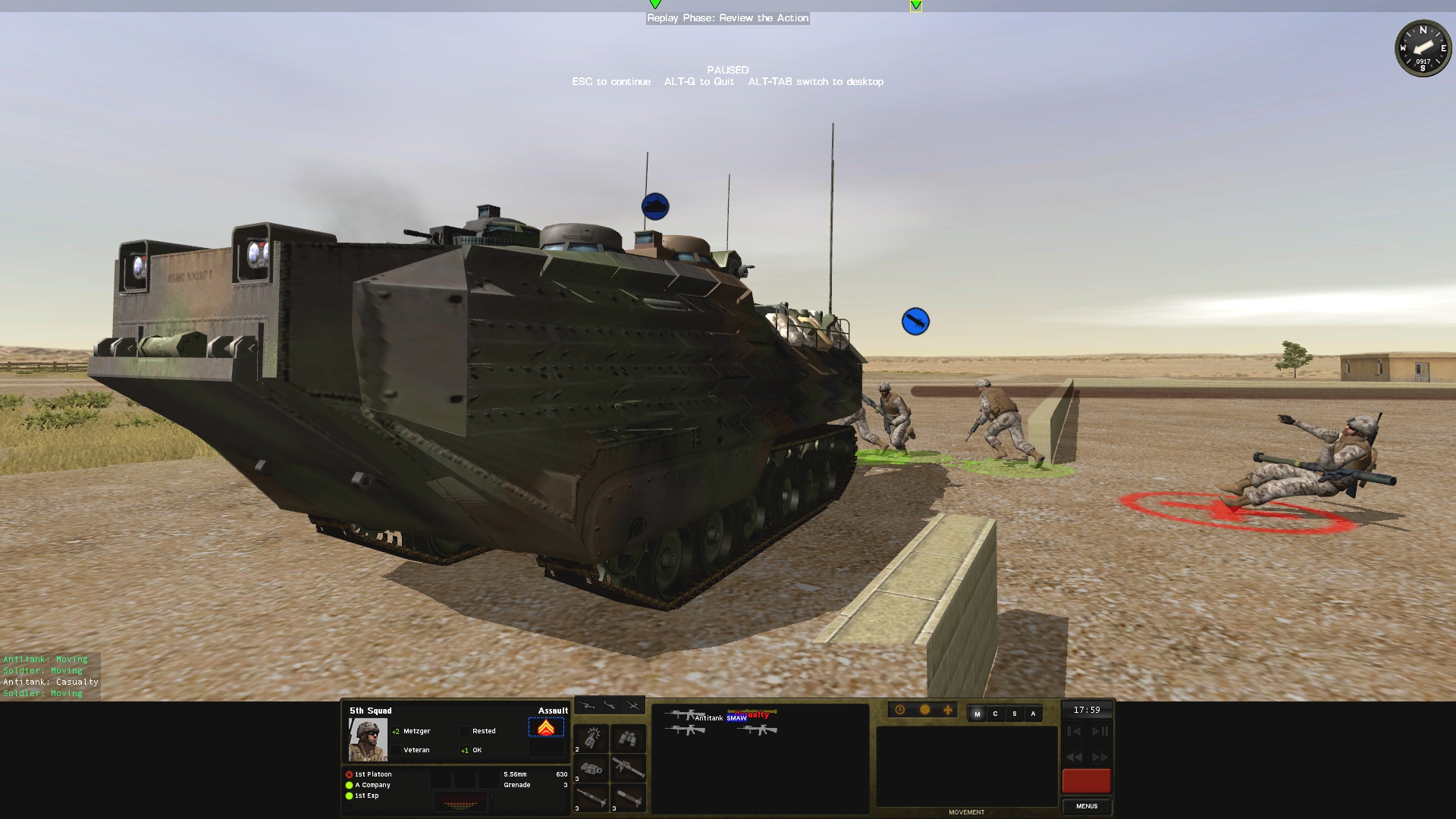 Reloading Metzger's AT squad close to the racecourse house, Deathproof also attempts to deter the thrust from the park. It's difficult to assess the results of the vehicle's suppressive fire, but evidently some foes are uneffected. The last man in Metzger's party is half a dozen strides from the ramp when he's knocked off his feet by a supersonic life snuffer.

Deathproof seems to think she's starring in Spin Tires not CMSF2. Shortly after setting off for G56, the hapless heffalump gets bogged for the second time in three turns and this time there's no ditch involved.

Buildings against Camp Geiger's eastern wall get a sprinkling of small stones and earthen clods at T+24 seconds when something, probably a mortar round, detonates with a neck-shortening crash amongst the weeds circa m39. 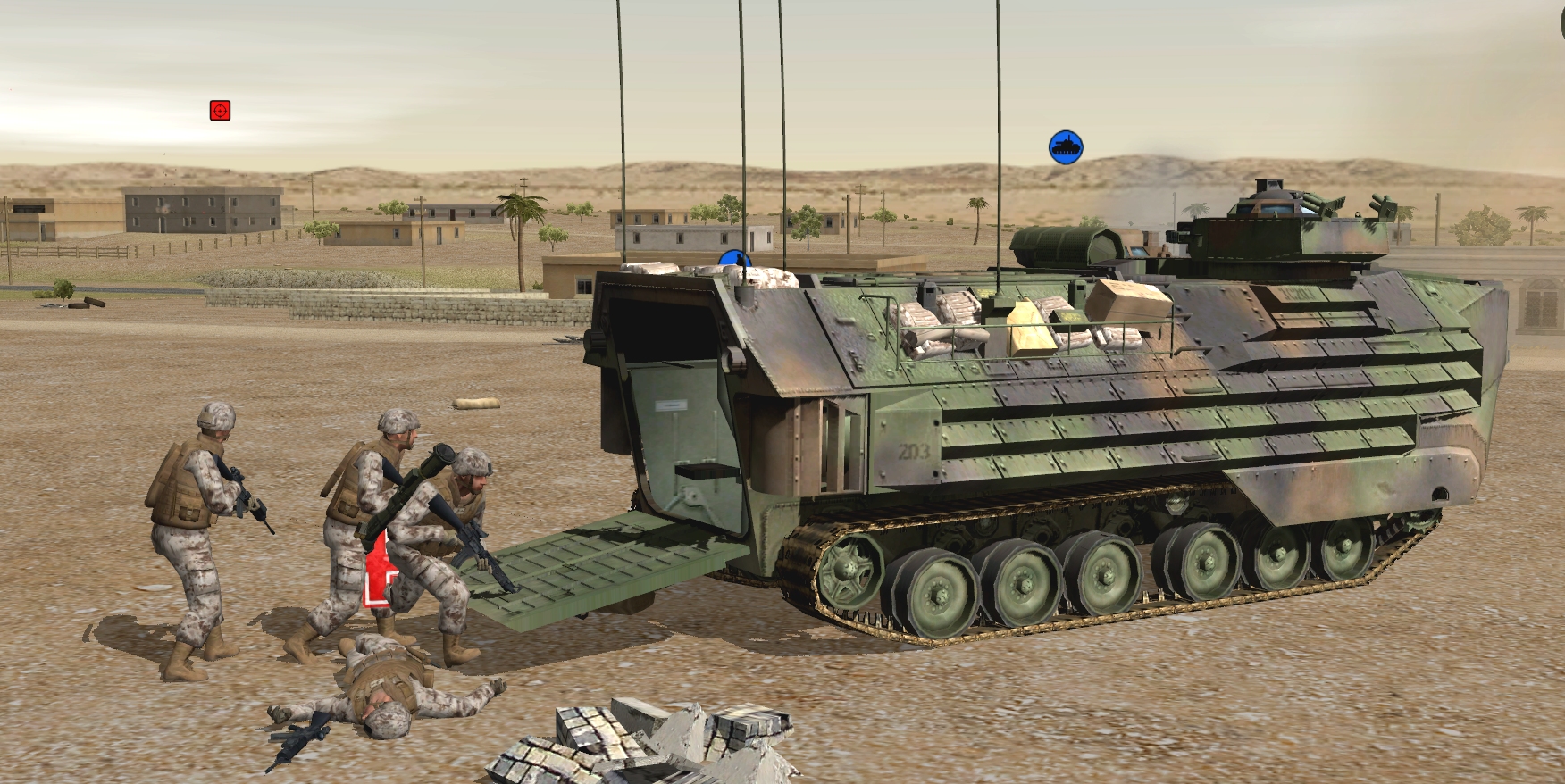 A hundred metres east of the smoking crater, Bayou Belle frets while Iverson's men gather equipment in preparation for departure. Concealed from hostile eyes by another batch of smoke grenades, the protracted loading process is almost complete when a Dragunov sniper rifle braced against a window frame at c18 interjects.

The sharpshooter who reduces 1st Squad to 11 men has next to no time to savour his contribution to the liberation of Al Rayman. Bayou Belle's grenade launcher sees to that.

It's only when I watch the turn #3 action replay for the third time that I realise that the short-lived sniper opened his account by killing another Marine on the verge of boarding an AAV. In Camp Geiger one of 4th Squad's machinegunners never made it into InstiGator's bulletproof belly.

Other turn #3 developments worth pondering:

The technical appears to have survived Bayou Belle's grenade barrage. At various points during the turn it's glimpsed reversing back down the riverside road.

The green MBT spotted lurking behind a house by the heli crew is on the move! Difficult to track because of the swirling smoke close to BB (heading for the lighthouse, the weary Dutchmen no longer have LoS to it) it's last seen trundling westward in the vicinity of D16. 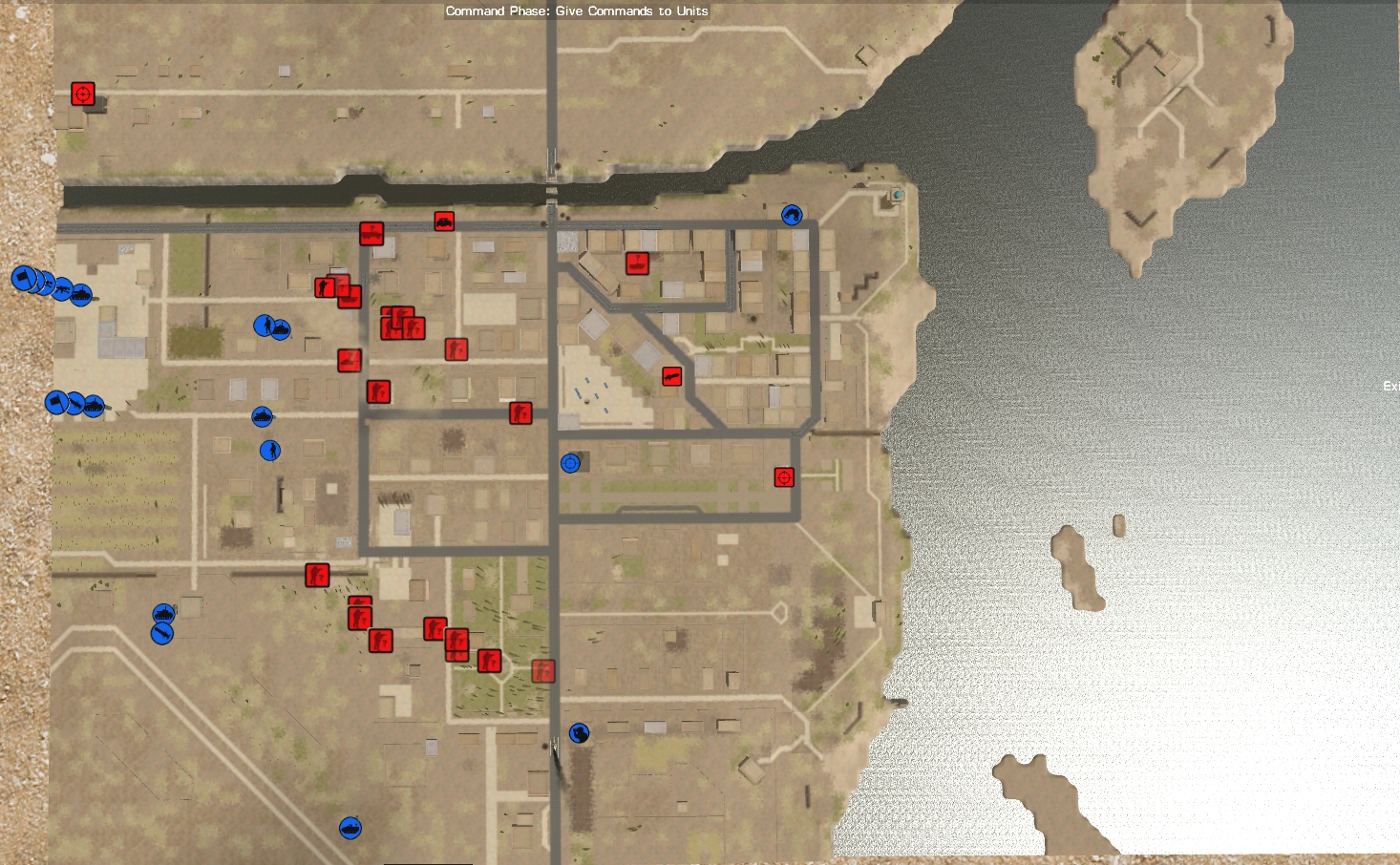