QQ's first and, quite possibly, last sniper duel finishes with Stone's (no relation) sharpshooters practising their synchronised cowering on the ground floor of the Hotel Lux. Before you judge the lily-livered jarheads too harshly, let me tell you about how the dastardly Qatabis broke one of the golden rules of the sport.

To be fair to the Red Team, it was the Blues that cheated first. Ignoring strict ISF regulations, Stone's marksmen opened up on the enemy snipers at redr52 with everything they'd got. For a good thirty seconds bullets, and possibly the odd rifle grenade too, were traded and no-one showed any sign of backing down. 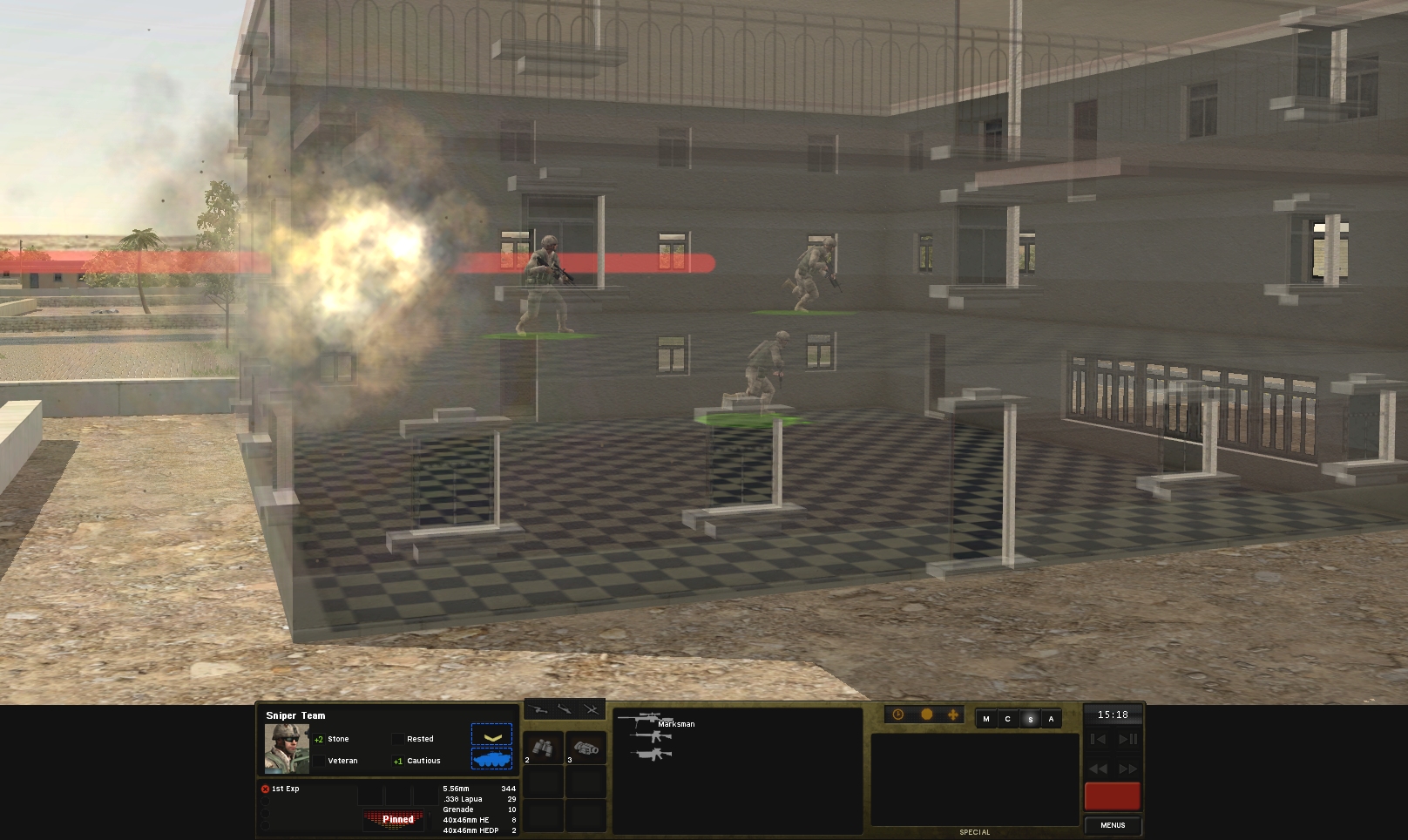 But then the AT team on the roof at redh44 stuck their oar in and the contest swiftly descended into farce. Two shoulder-launched rockets removed one of Hotel Lux's three stars and sent Stone's crew scuttling downstairs in search of safety.

The racecourse house (n64) was the place to be in turn #5. Dozens of dusty American boots pounded across its threshold during this sixty-second action phase. Miffed that their taxi wasn't prepared to drop them at the door, InstiGator's passengers had to gallop the last twenty metres under fire. Although Swamp Thing, InstiGator, and Daly's squad significantly reduced the intensity of the incoming bullet blizzard with their emissions, one Marine was potted sprinting between battle-bus and building. The unlucky individual? 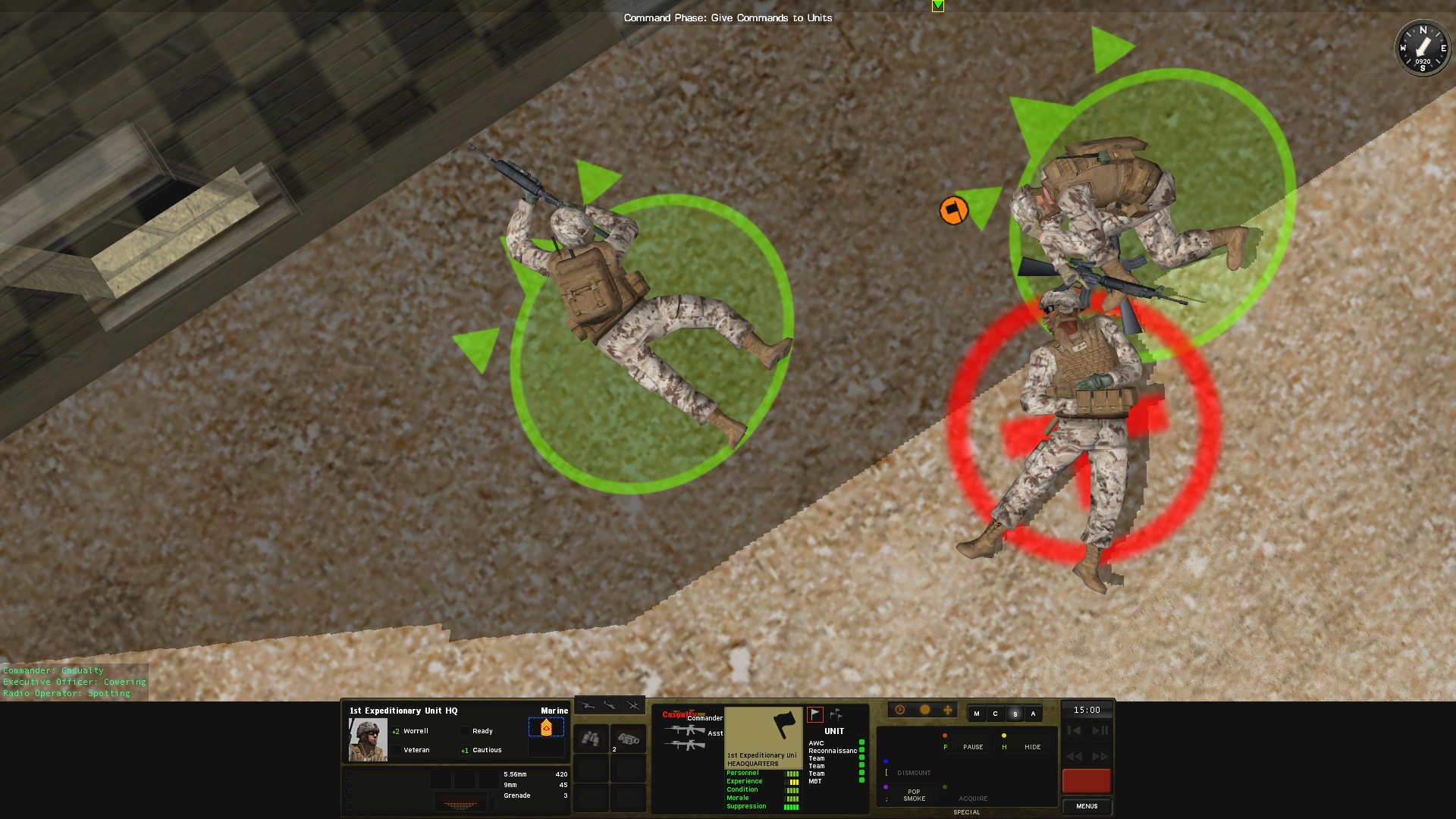 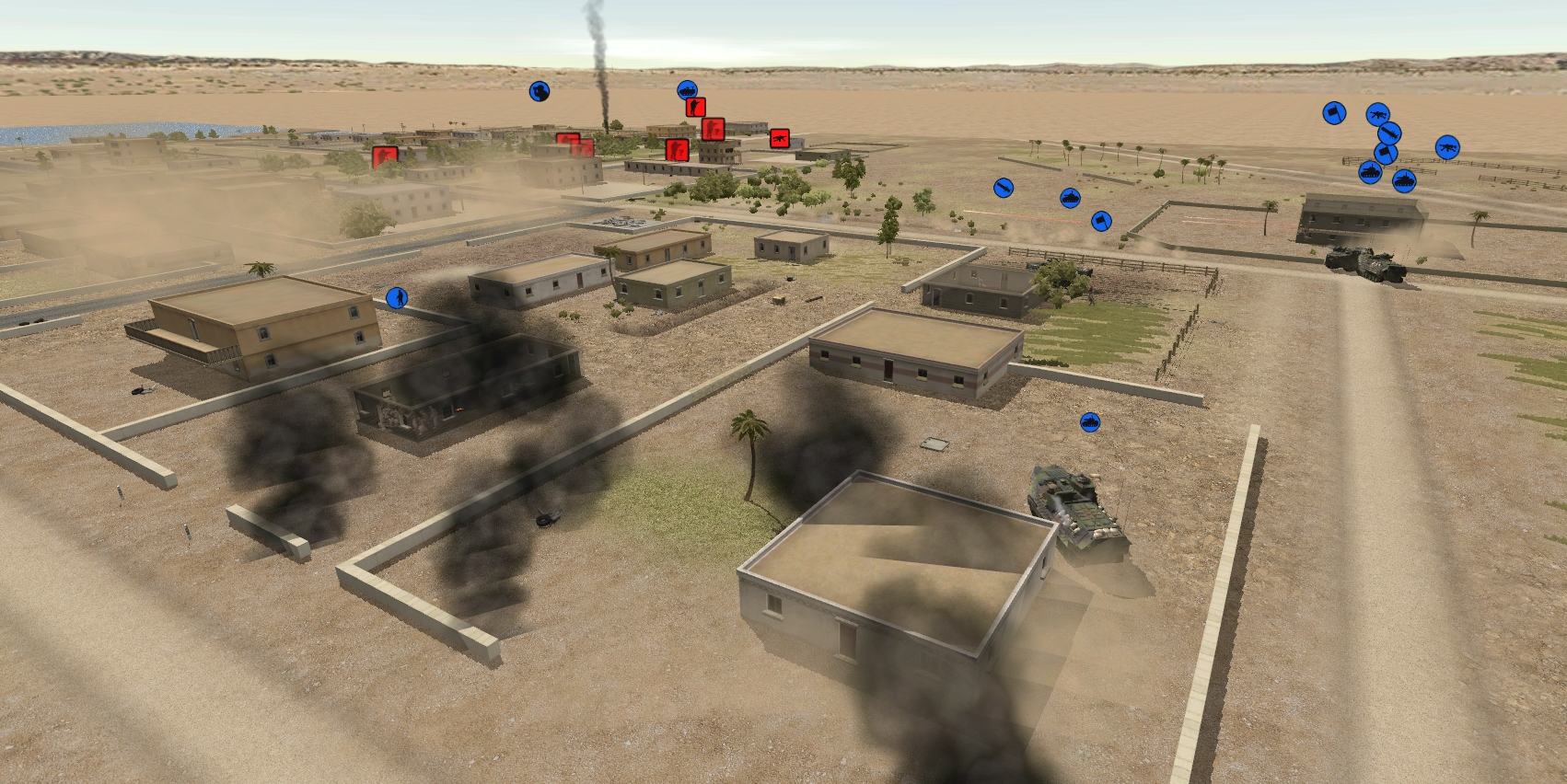 Daly's squad, on the other hand, ignored their order and chose to stay put. The disobedience doubtless owed something to distraction. 2nd Squad were engaged in a ferocious firefight with foes to the north for much of the turn.

The last survivor of 1st Squad? A few seconds after the clock restarted he was on his back staring at a pale Middle Eastern sky with unblinking eyes.

There were a couple of interesting enemy vehicular movements in turn #5 that you need to know about. At T+20 the whirlybirdmen catching their breath in a house across the road from the lighthouse became aware of a technical tearing towards the coast on the north side of the river. The heavily-armed Hilux was still barreling east when the turn ended.

And it looks like Iverson's LAWyers didn't slay the marketplace T-62 after all. At T+25 the bruised behemoth sashayed onto the Al Faq-Khuff road at V41. When Stone's snipers lose sight of it, it's plodding north towards the shattered bridge.

If Willy the Wiesel had chosen to finish his pell-mell tank rush at V82 rather than U82 then it's possible the manoeuvre would have ended with a nailbiting TOW launch. Is there still time for that tail shot I wonder?

Other turn #5 developments of note:

Determined to justify her moniker, Deathproof has just set out on a daring thunder run along road 60. Her passengers, Metzger's assault/AT squad, were given ample time to disembark and join their comrades in the racecourse house, but, for some reason, refused to exit so they're along for the ride.

Equally unintended is the current position of one of 4th Squad's two MG teams. 'A Team' has decided to set up in the yard south of the racecourse house rather than inside the building as instructed. 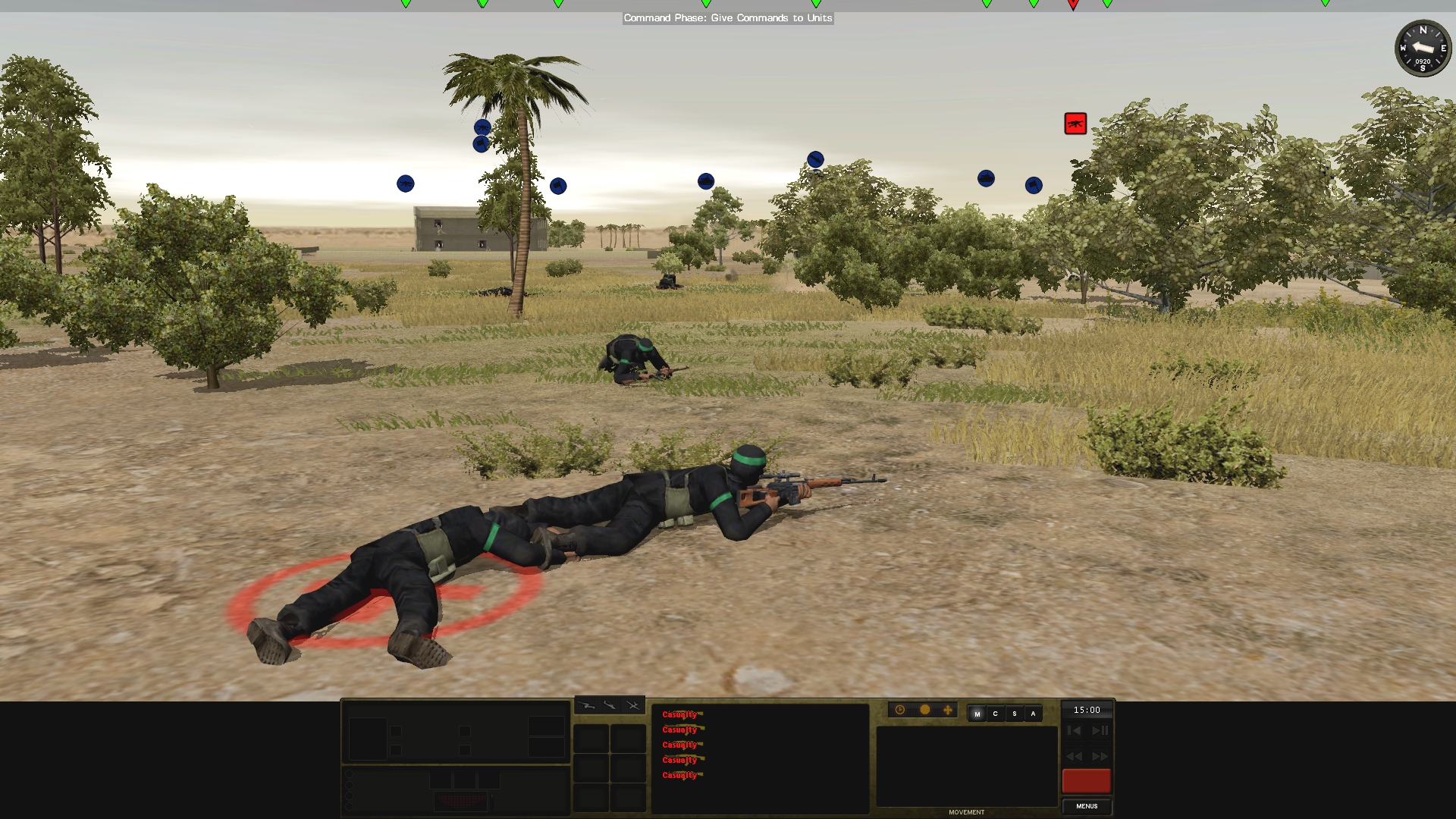 Park Force looks to have taken a terrible pounding this turn. The triangle of scrub south of road 60 is littered with the dead and dying. 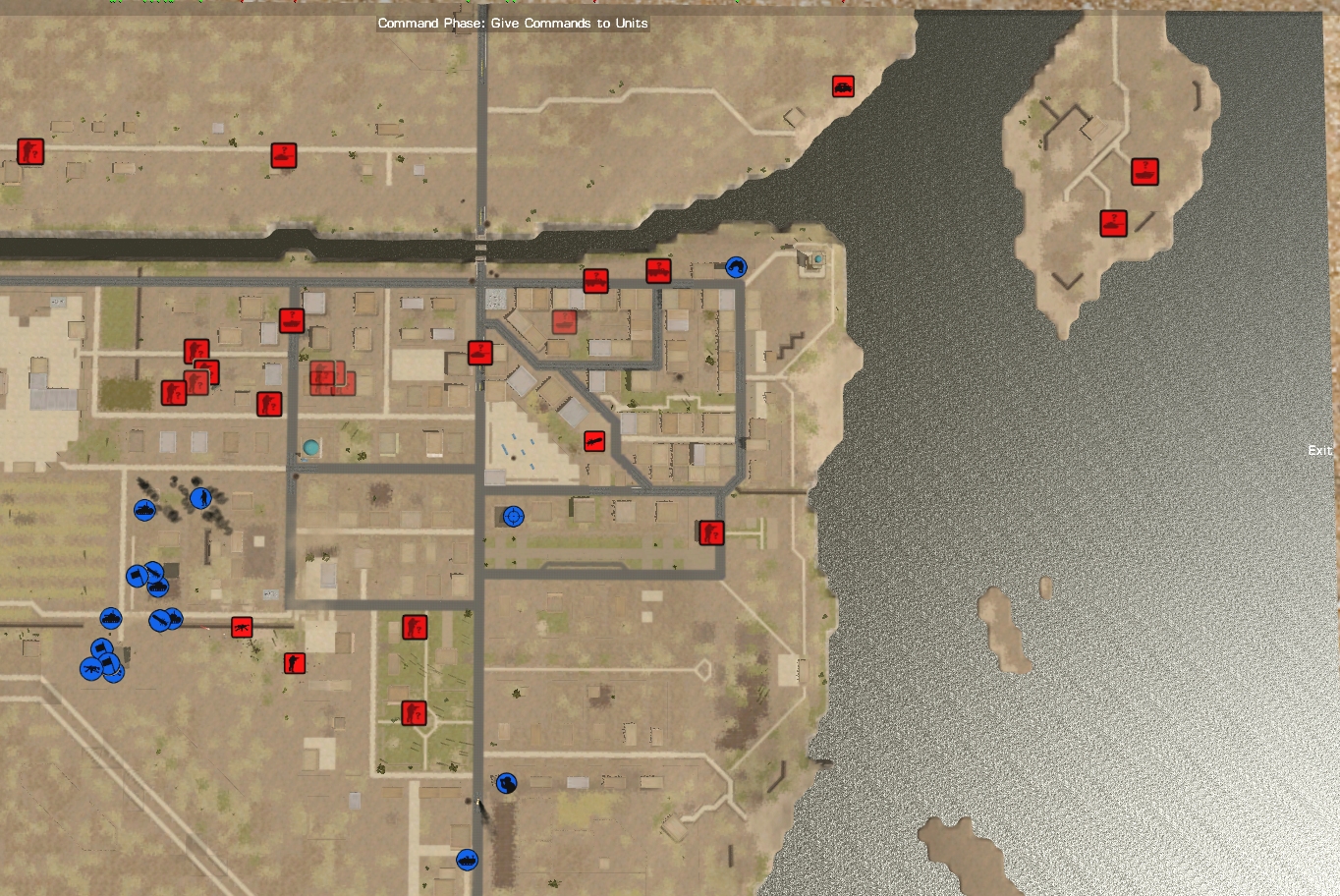