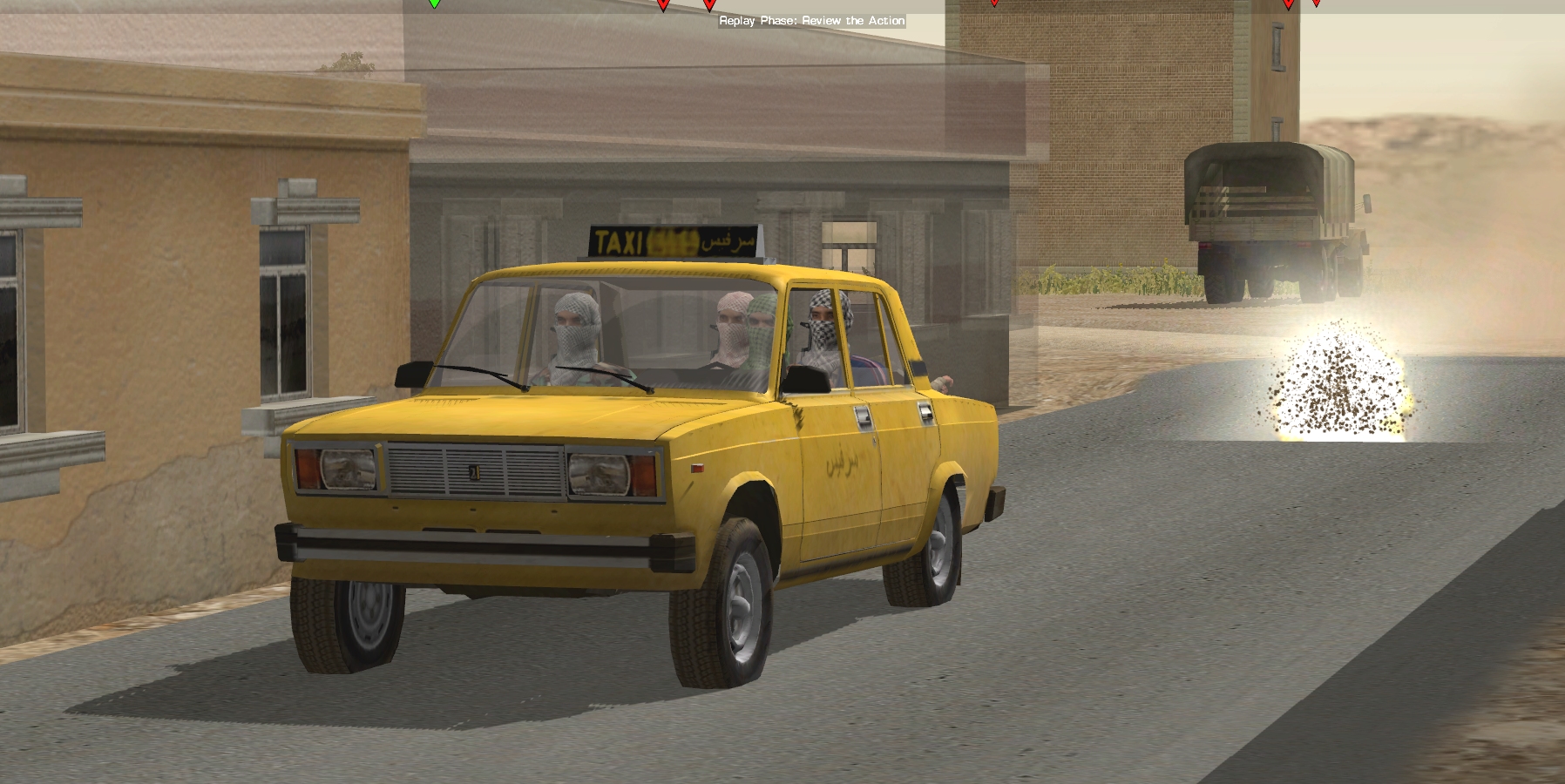 The taxi ambush near the lighthouse goes like clockwork. Clockwork that's been hit several times with a mallet then tossed into a tar pit. By the time the helicopter crew emerge from hiding, the reversing cab has disappeared behind the building at redw29. Feeling foolish, the Dutchmen stand around debating what to do next. They're deep in discussion when, half a minute later, the cab reappears, heading west and going like the clappers. Overdam's hastily hurled grenade somehow finishes up on the windscreen, but a nonchalant flick of the wipers ensures it doesn't remain there long. When the turn ends the hapless ambushers are wondering whether to take on the truck or have a shy at the technical parked on the beach at redL5.

Not wholly satisfied that the motionless/vacant BMP-2 is kaput, the Chally puts two shells into it as it advances to V76. As the first shot kindles vivid flames, the second feels a tad unneccessary, especially as there's a beachhouse in need of demolition 140 metres to the east.

By the time the British heavyweight finally gets around to brickwork remodelling...

...the Landy Boys have crawled into cover, and Willy, having trespassed northward, is busy inspecting South Beach.

Stone's sniper team is the Comment Commanders' most productive unit during turn 8. While the American marksmen only add one more scalp to their tally during the sixty seconds of the action phase (one of the wounded passengers from the IFV is mercilessly eliminated while cowering in the marketplace) their shift to the balconied third floor of the Hotel Lux reveals two enemy units that might have sprung nasty surprises had they remained hidden.

The T-62 is lurking by the bombed bridge. Anything tackling it from due south will probably only have a turret to aim at.

And what's this sitting in the kinked ditch at redv48? Why, it looks remarkably like an AT-14 Spriggan waiting to bushwhack unwary AFVs using the road down to South Beach. ATGM systems of this type have liquidated Leopard 2s in Syria, Abrams M1s in Iraq, and Merkavas in Israel, so it's probably worth treating this shrinking violet with respect.

Park Force ceased to exist during turn 8, and the AAVs and infantry responsible for the mopping-up got the job done without losing a man. Sergeant Daly was the only peacekeeper to end the turn bloodier that he started it. 'A team', the five-man rump of  2nd Squad, were focused on the Ditch o' Doom when an RPG slammed into the northern wall of their billet, lightly wounding Daly. The projectile looks like it emanated from circa r44.

The situation at the end of Turn 8:

Ample Annie and Swamp Thing are loaded and ready to roll. Empty InstiGator is squirming past the carcass of Deathproof. The machinegunners of 4th Squad's A Team and Daly's party, the only dismounts in the area, are hoping they won't get left behind.

There are clots of LoS-ruining black smoke gusting across the V highway near the hotel.

Having completed an uneventful push towards the park, the Scimitar crew are scanning shrubberies for signs of life and trying to remember what comes after “I feed the pigeons, I sometimes feed the sparrows too. It gives me a sense of enormous wellbeing...” 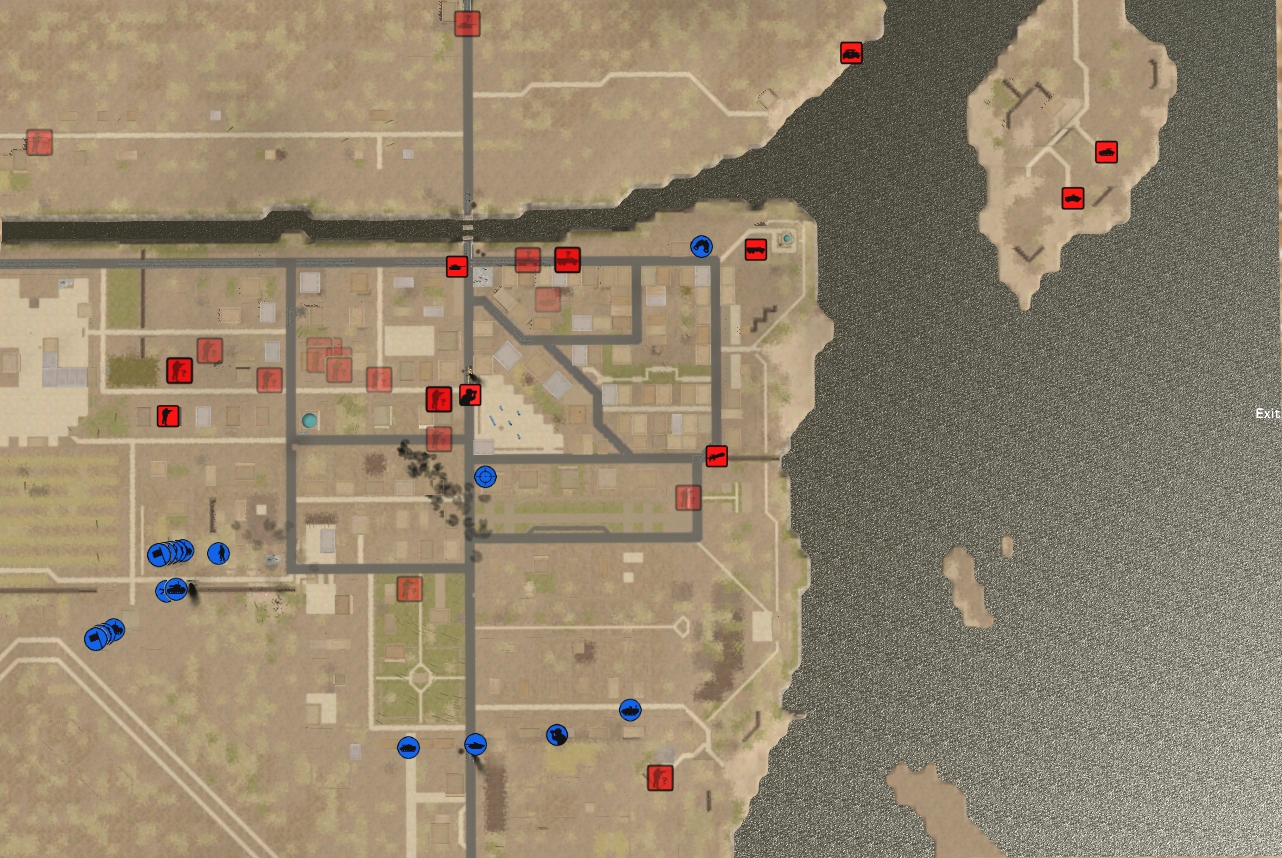