No disrespect to The Bard of Avon but I reckon QQ's balcony scene knocks spots off Romeo and Juliet's one.

Before turning his C14 Timberwolf on the AT-14 Spriggan in the ditch at the end of the road, Stone (no relation) can't resist felling another innocuous IFV passenger. The deed is swiftly and economically done, but the USMC sniper team find eliminating the two-man crew of the tripod-mounted AT weapon at redv48 a trickier task.

Shots designed to harry and hole the denizens of the ditch only succeed in annoying them. Riled, the AT-14 crew decide that their assailants warrant a laser beam riding anti-tank missile. Happily, a chunk of obstructive masonry on a building at redf49 means the Hotel Lux gets to keep its NATO guests and its one remaining star for the moment.

They're so engrossed in slaying and suppressing the anti-tankists, the USMC marksmen barely notice the yellow taxi which fishtails to a halt in a cloud of dust in the marketplace midway through the turn. There's something about the demeanour of the four armed men who leap from the vehicle the moment it stops, that suggests they haven't come to the market to buy carrots.

Stone's satisfaction at eliminating one of the AT-14 operators is short-lived. The taxi dismounts drop to their knees and, raising their AKs, direct a furious deluge of lead at the dangerously exposed targets above them. In the blink of an eye two Americans are on their backs, leaking life liquor. A third, Stone, is lucky to escape the balcony alive.

The beachhouse skirmish isn't as cinematic as the hotel one, but in its own way it's just as gripping. Early in the turn, Willy spots two grenadiers legging it westward from the battered coastal cottage and attempts to arrest their progress with an MG-3 squirt. Unfortunately, the runners have arranged covering fire. Muzzle flashes in the beachhouse windows show the property is still occupied and unsuppressed.

The combined firepower of the Wiesel and the Landy Boys fails to quiet the Qatabis near the strand. Willy's gunner survives the blast from a projected grenade only to stop a bullet a few seconds later. Our pint-sized Panzerjäger is now totally reliant on one man, a blood-spattered driver.

Away to the west, things are going much more smoothly. Behind a Brown Windsor soup of self-sown smoke, Ample Annie and Swamp Thing slip away from the racecourse house area unmolested.

Her manoeuvres complicated by the Ditch o' Doom and Deathproof's sorry remains, InstiGator struggles a little to implement her orders but by T+60 is well on the way to collecting the peacekeepers' rearguard. 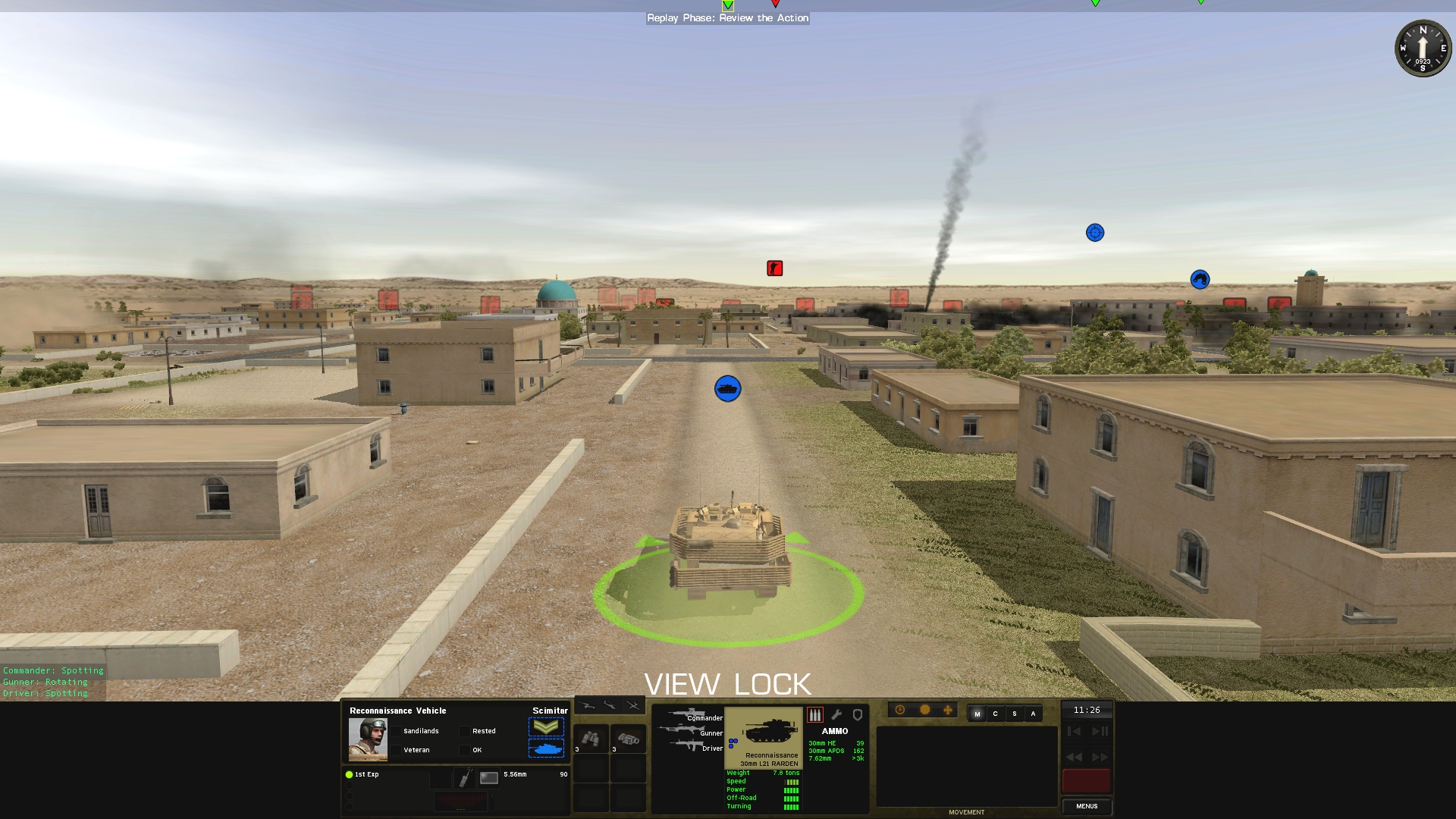 It's a quiet, fruitless turn for the pair of British tanks either side of the park. The Scimitar gets a brief between-houses glimpse of a retreating (?) straggler as it hunts north. Chally sees nothing worthy of ammo expenditure from her new position at V70. 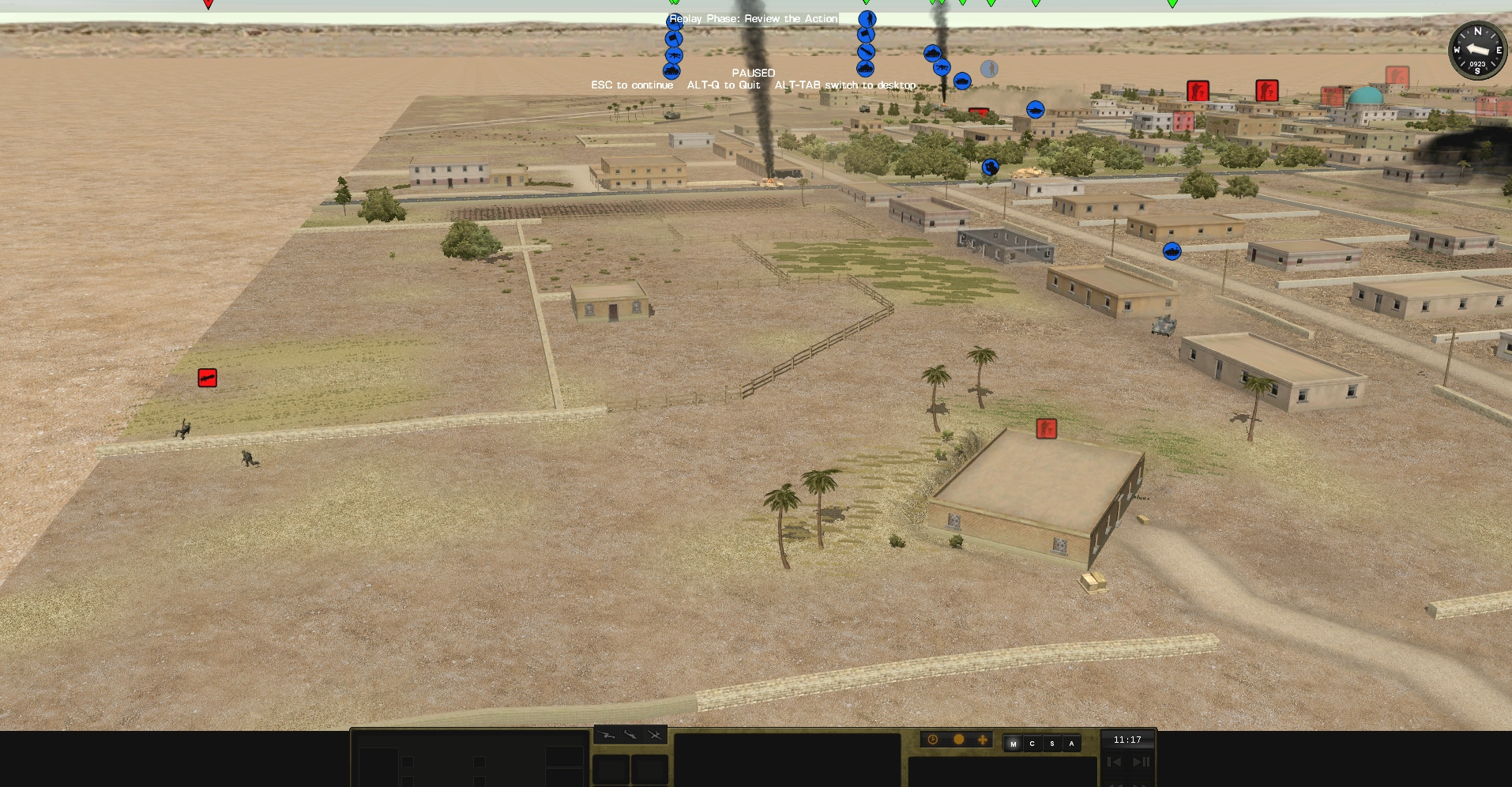 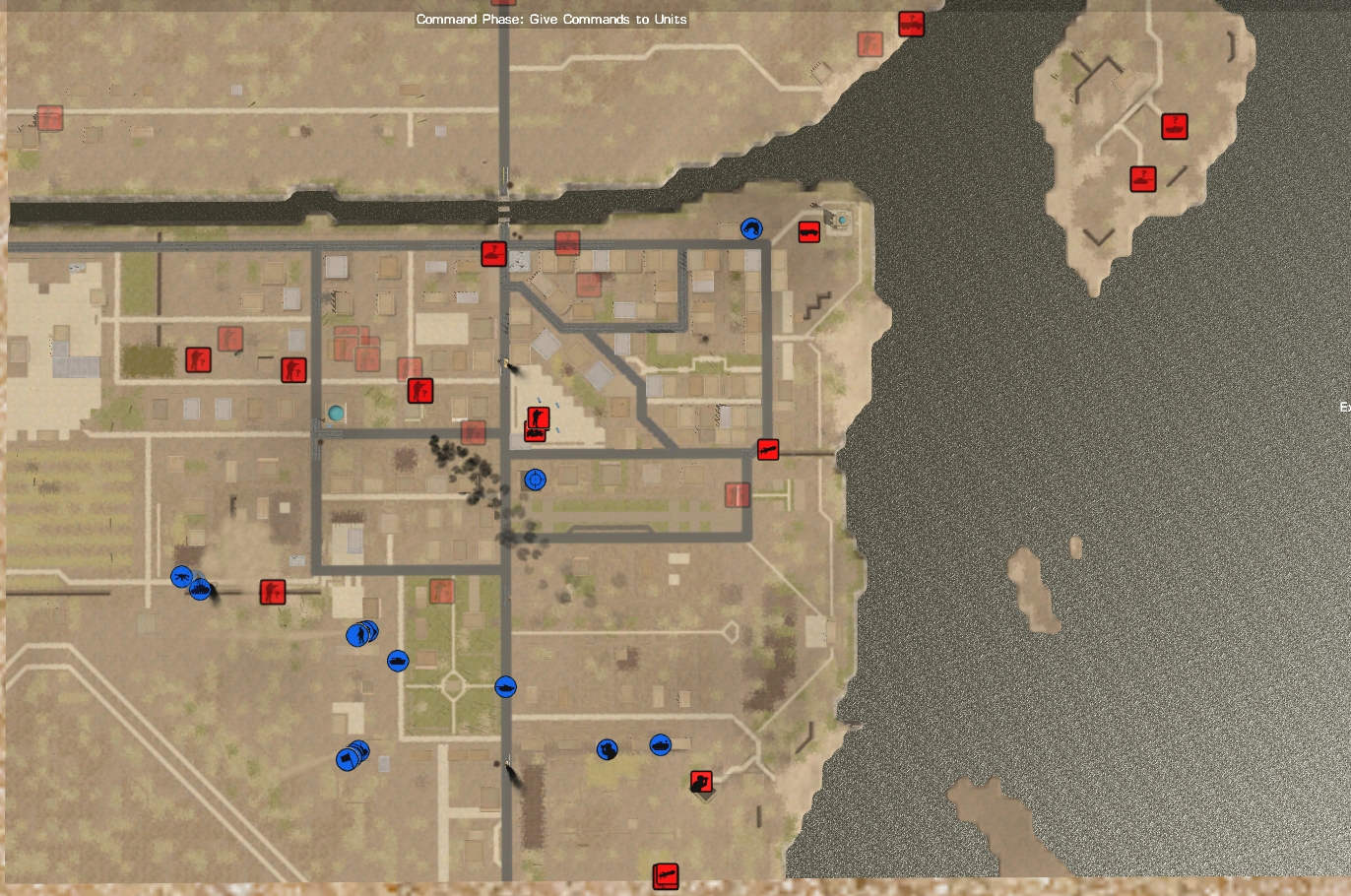