Radio The Universe is not a high-profile game. Until it surfaced on Kickstarter five years ago (raising only $81k, but in excess of all stretch goals), nobody knew it existed, nor of its developer, the enigmatic solo artist 6e6e6e. All we've seen of it since is an old trailer and some brief animated GIFs and clips, posted intermittently to the developer's Twitter feed and YouTube channel.

After watching fifteen minutes of nearly uncut Radio The Universe footage, I find myself both thrilled and filled with regret at not chipping in on the Kickstarter back in 2012. Read on, and take a look for yourself.

I'm not sure about you, but that tickles all manner of dark sci-fi fancies for me, blending familiar Zelda-esque elements with all manner of gothic and cyberpunk influences. The footage above is of the Black Heap region, meant to be one of the starting areas of the game, and shows the protagonist battling some hefty-looking robots while gathering power and upgrades among the junkpile.

Outside of the obviously impressive soundscape in the video, the visual palette, style of shading and weighty character movement all remind me fondly of the original Alundra for Playstation. The fact that a lone developer can produce something which would have once required a 20-strong team of professionals is a sign of the times, even if it has taken over five years to reach this point.

The game looks almost completely transformed compared to the screenshots and trailer attached to the Kickstarter, but the core is still there: A dangerous cyberpunk world dense with mechanical threats and where death seems to be just part of the experience, albeit a jarring, sudden and unpleasant-sounding one. 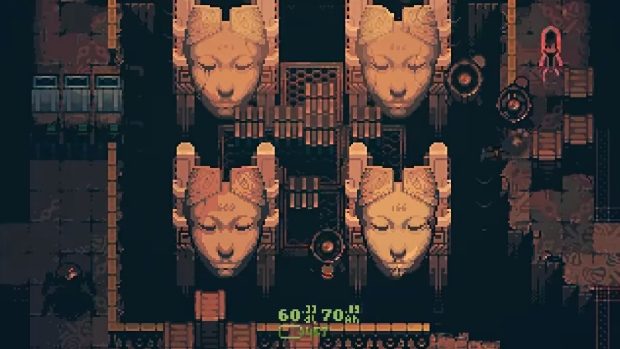 Looking at the map of the game-world as detailed in the Kickstarter page, I can't help but draw comparisons to Dark Souls. Your crumbling cathedral hideout acting as a base of operations as you venture both higher and deeper. A world of interconnected regions linked by elevators and vehicles, with an endless void below and a world of artificial sunlight above.

Just reading about the game gets my imagination ticking over, and seeing it in action confirms that 6e6e6e may be quiet and enigmatic, but they have talent, and I will be eagerly following development of this until the end, no matter how far off that may be.