I’m surprised by how much I like Realm Royale, the free-to-play battle royale spin-off to Hi-Rez's Paladins. This is battle royale by way of wizards, and an even goofier spin on the genre than Fortnite’s. Neither has the same tension as Playerunknown’s Battlegrounds, but - oddly - this isn’t really a game about tension. This is a game about soaring into the air, whacking down a fireball and getting turned into a chicken when your flashy plan falls apart.

I'm gonna jump in and explain the chicken thing first, because it's one of Realm Royale's best ideas. When you get shot, stabbed or magicked to death, instead of actually dying you get to run around as a quivering chicken for 30 seconds. Survive until the timer runs out, and you're reincarnated in human form. It's very rare that I'll manage to play it more than once in each round, but that chicken escape game might be my favourite part of the whole show. Brilliantly, every building in the game is full of windows that chickens can leap through but humans cannot. It gives the poultry a fighting chance, so long as they keep that strategy in mind. 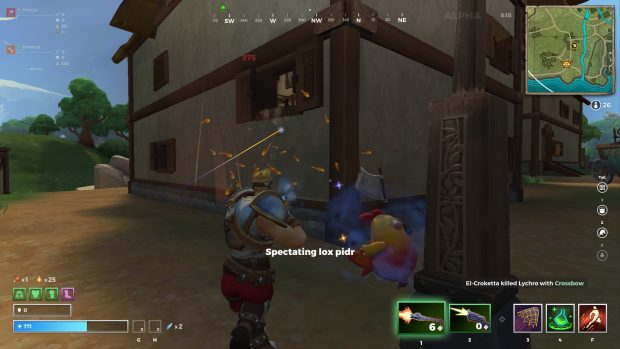 So that's how most games end - let's talk about how they start. There's no solo mode, which is strange as there was one in the non-Steam build. It means that if you're playing by yourself you'll have to follow the whims of a random teammate if you want a shot at victory, and be at a significant disadvantage nonetheless if you're not on coms with each other. You can also forgo a teammate and drop in by yourself, if you want to.

You can pick from five classes, including health-regenning Warriors, turret-building Engineers and spell-slinging Mages. Each class starts with a unique passive ability and a movement ability, both of which vary wildly in usefulness. The now traditional flying vehicle - this one's a zeppelin - passes over the map, and everyone jumps down into one of the impressively varied biomes. From there, each class can find different abilities tucked away in chests dotted around the map. An encroaching red mist shrinks down the playspace, until only one team is left.

It's refreshing to gain some control over what my capabilities will be in a battle royale game. The pool of abilities isn't very large at the moment: you can fill your slots with two of the four skills you can find for each class, though they do come in different tiers. Again, there's a bit of imbalance in how useful those abilities seem to be. I don't really care for the Warrior's charge or the Assassin's smoke bombs, but the Mage's skill that heals while making her immune to damage seems indispensable. It's sorely in need of a balance pass or two, but these are early days and I'd expect those will be forthcoming. 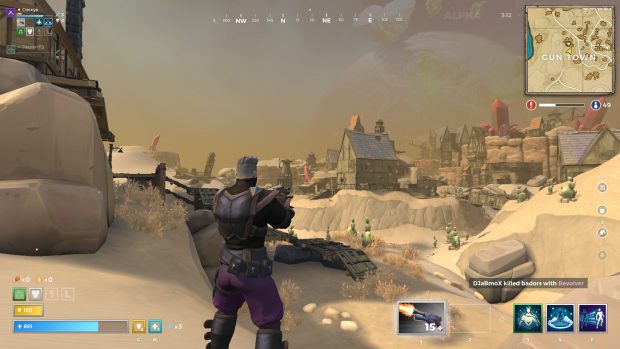 The classes don't really fit into different roles like they do in Paladins or Overwatch, though you could argue that the Warrior's buff-providing potions and the Engineer's turrets make them a tad more support-focused. Everyone has a different bags of tricks, though those bags all contain a roughly even split between doing damage or avoiding it. I've only played in a duo rather than in a full squad, but I'm not convinced that varied team compositions will see any more success than a gang of four Hunters.

There's one other way that your class choice shapes what you can get up to in each game, and it ties into Realm Royale's other best idea: Forges. Forges are special locations dotted around the map where you can craft health and armour potions, armour, abilities and your class's unique legendary weapon. The resources to do that are harvested from unwanted items, but to craft your legendary weapon you'll need to bag yourself a chicken. It's a neat little way of encouraging players to be more aggressive, rewarding those that fight over those that hide.

The Forge idea as a whole is about that, really. It takes a full minute to craft anything, during which smoke pours out of the top of the Forge and a clamouring sound alerts everyone nearby that you're making some goodies they might be able to steal. I dig how that gives me something to work towards in each round, rather than the 'oh, I guess I'll loot some more houses' plan that's the mainstay of similar games. Almost invariably, fights kick off around Forges - often involving more than two groups. I've put in a fraction of the time that I have in Plunkbat, but I've already ran into a broader range of combat situations. 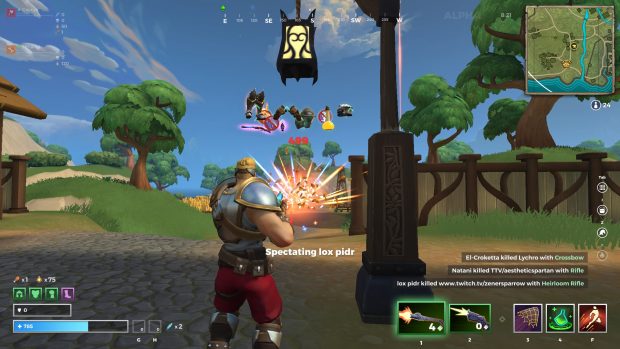 Which isn't to say I'm wild about the combat itself. It's got a very arcadey feel to it, with weapons that lack the weight that I want from my shooty sticks. That said, the abilities do keep clashes interesting in a way that fighting in Plunkbat or Fortnite is not. There's an emphasis on mobility, with the occasional devious use of abilities: I had a great moment where I managed to block off an entrance from a pursuer using a skill that's much the same as Mei's icewall in Overwatch.

The hotspots that Forges generate go some way, though maybe not far enough, towards making up for how long the circle takes to shrink. It's a longer process than other battle royale games I've tried, which can lead to a wide area that's scarcely populated. I found I was still bumping into players more often than I do in Plunkbat, but Plunkbat makes up for its long periods of downtime by immersing me in a realistic environment that provides a tension which is lacking here. That's also to do with how death doesn't come instantly in Realm Royale, both because I can generally buy myself some time with abilities, and because if I fail to there's always the chickening. 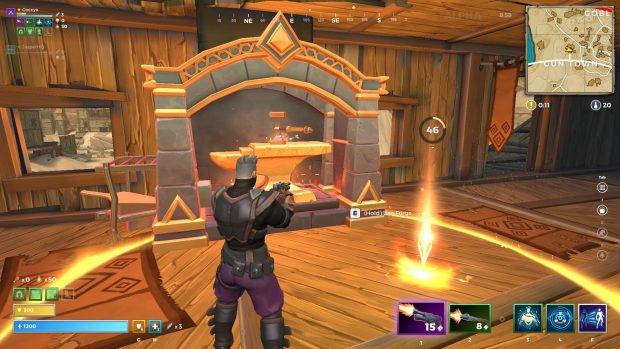 To be clear, I'm not criticising Realm Royale for not being realistic - far from it. I've already got one tense, slow-paced battle royale game I can tuck into, which leaves plenty of space on my plate for a wacky one. Many see that in Fortnite, though I've never quite clicked with it. I think that's got something to do with just how good people are at that game, now that so many have been playing it religiously for months on end. Realm Royale doesn't have that problem to the same degree. At least not yet.

I actually really like the fantasy setting. I love the varied biomes, which let you wander from icey mountains to mushroom forests through to arid desert in the same match. They're gorgeous, in a very low-poly way. Combined with the background curios floating in the sky, like a giant cloud warrior and an exploding sun, the world and its unseen denizens piqued my interest in a way that I wasn't expecting. Those little bites of flavour go a long way in a game where I spend a large amount of time meandering around on a horse. 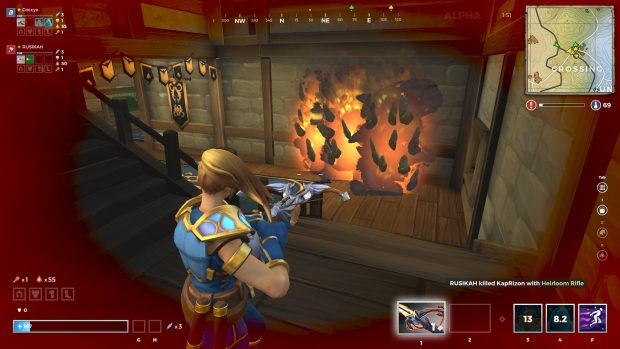 Oh yeah, I forgot to tell you everyone can summon a horse. In my defence, so did the game - and communicating important information like that is currently Realm Royale's biggest failing. The inventory screen is non-functional at the moment. All it lets you do is swap your weapon slots, without giving you any information on either those or your skills. When you find skills in the world, a UI bug has cut off the last bit of their descriptions. I've found so many abilities that say something similar to "freezes enemies and - " that it's stopped being funny.

I can't get too worked up about any of that though, because I'm confident those issues will be sorted in upcoming updates. It's still in alpha, and the Steam build has only been online for a couple of days. Clarity issues aside, these are some solid fundamentals. Hi-Rez have convinced me I can dip into two royales at once, and I'm intrigued to see where they go from here.

Realm Royale is out now on Windows via Steam and is free-to-play.