A million years ago, on some African rock, our hominid ancestors gathered around a perfectly smooth black rectangle, and gazed upon it in awe. Beneath the surface of that strange artefact, lights and colours moved. The hominids looked on, stricken by wonder, and witnessed the perfect space sim. We can be sure this happened because, as a species, we seem to have an instinctual idea of the standard to which all space sims should be held, without any such game having been released in living memory. Indeed, there’s perhaps no other genre of game more prone to accusations of over-promising and mutterings of disappointment - whether they’re justified or not - than this one.

If your game is experienced primarily through a spaceship cockpit, than you'd better have made a 1:1 scale galaxy teeming with habitable planets, each with environments that are somehow both procedurally generated, and as characterful as Skyrim, Liberty City or Lemoyne. Us players will demand a functioning, responsive economy, and conflicts between galactic-scale factions that can be influenced on a macro-political scale. We will want to get out of our pilot’s seats and wander around inside our ships. We will want the toilets to flush. We want to escape into an actual, literal universe, and woe betide any game that merely lets us fly a pretend spaceship.

Rebel Galaxy Outlaw is unassuming enough to dodge this outrage. Its universe is only a single galactic sector, with a modest 40 star systems to peruse. The planets and space stations aren’t fully realised 3D constructs, but abstractions made of onscreen menus, with animated backdrops and landing/take-off cutscenes. Even the spaceship cockpits are simple 2D screen overlays that remind you more of Star Wars: TIE Fighter than Star Citizen.

However, the reason Rebel Galaxy Outlaw has refused to extend its reach, is that it already knows exactly what it wants to grasp.

The game's limited scope can leave it feeling pretty shallow when you first start playing. The spaceflight handles well (providing you follow the game’s advice and use a gamepad), but docking and landing happen automatically, by way of more cutscenes, as soon as you get close to your destination. Even the middle of your trips can be skipped over just by pressing “autopilot”, and while you can activate the sublight engines instead, the result is merely that a cutscene is replaced with streaking stars. What's more, your travel is restricted to jaunts between waypoints such as stations or planetary bases, with the option of stopping off halfway if you receive a distress signal. There’s absolutely none of that sense that you could just pick a portion of sky and fly off into it to explore. 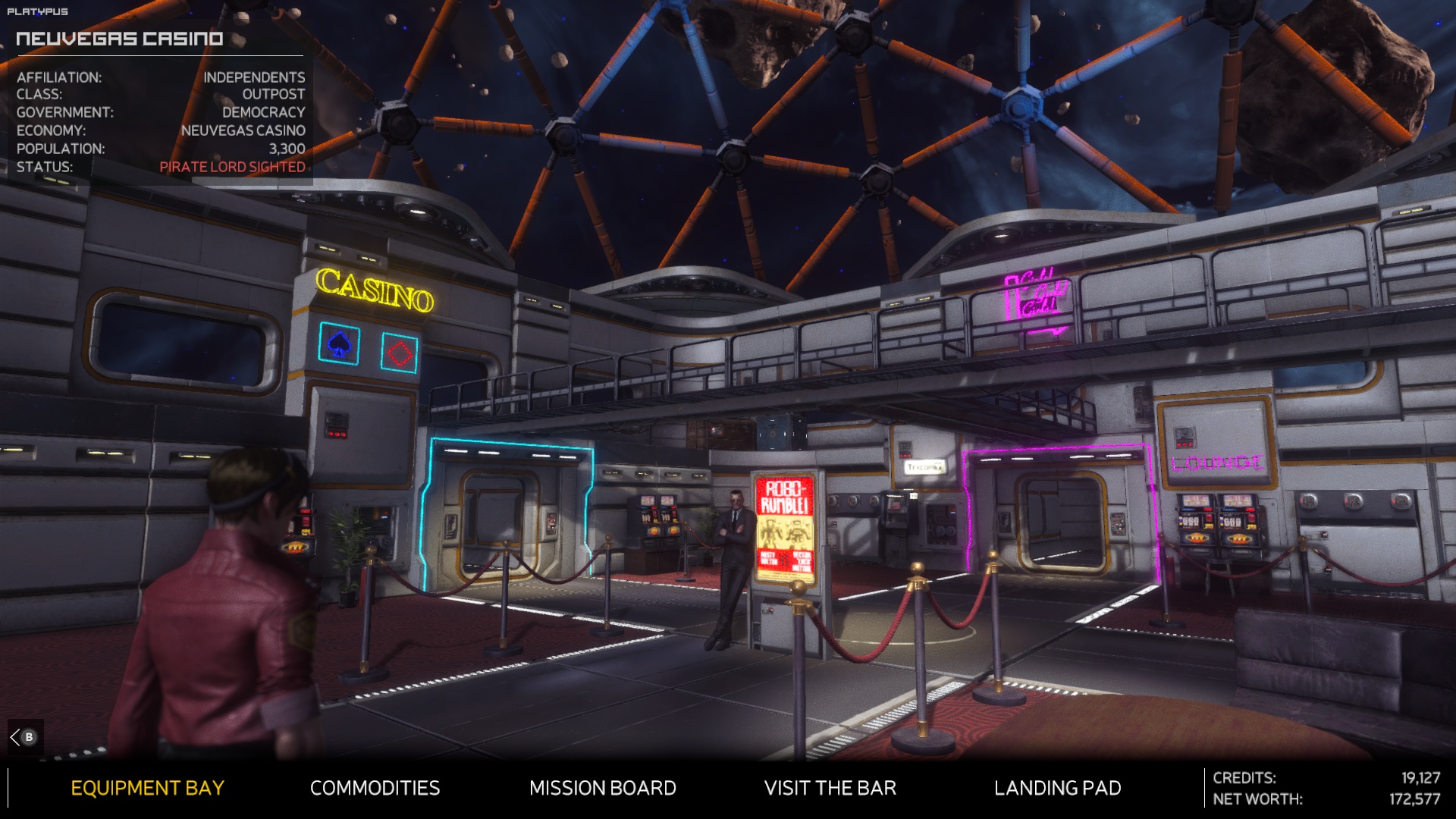 The missions on offer will be familiar to anyone who’s played the genre before - fetch this bounty, protect this freighter, deliver this cargo, etcetera. These are missions I’m completely fine with, as a player who’ll frequently turn any game he’s given into a postal service simulator. But surely part of the fun of playing space lorry driver is the nice big stretch of time involved in flying from one destination to another? Maybe that's something other players would like to skip over, but... well, why else would you take on package delivery missions?

I suppose that's it. Rebel Galaxy Outlaw doesn’t really want you running delivery missions. It wants you to fight stuff. And it gets what it wants.

Now, I have to admit I’m the kind of smuggler who'll drop their shipment at the first sign of an imperial cruiser. I’m in space to see cool space sunsets, deliver space cargo, and maybe try to do that thing from the Voyager opening credits where you skim over a planet’s rings. I typically avoid getting into a firefight because A) I’m bad at it, and B) visually, it’s usually pretty boring. Most simulated space combat amounts to “get the distant coloured dot into the middle of the screen”. The distant coloured dot might be a beautifully rendered galactic battle sloop where the artist has modelled everything down to the sweat on the alien pilot’s forehead, but it’s usually a long way away and it’s moving very fast, so unless you’re very good you’re stuck with coloured dots in distant circles. 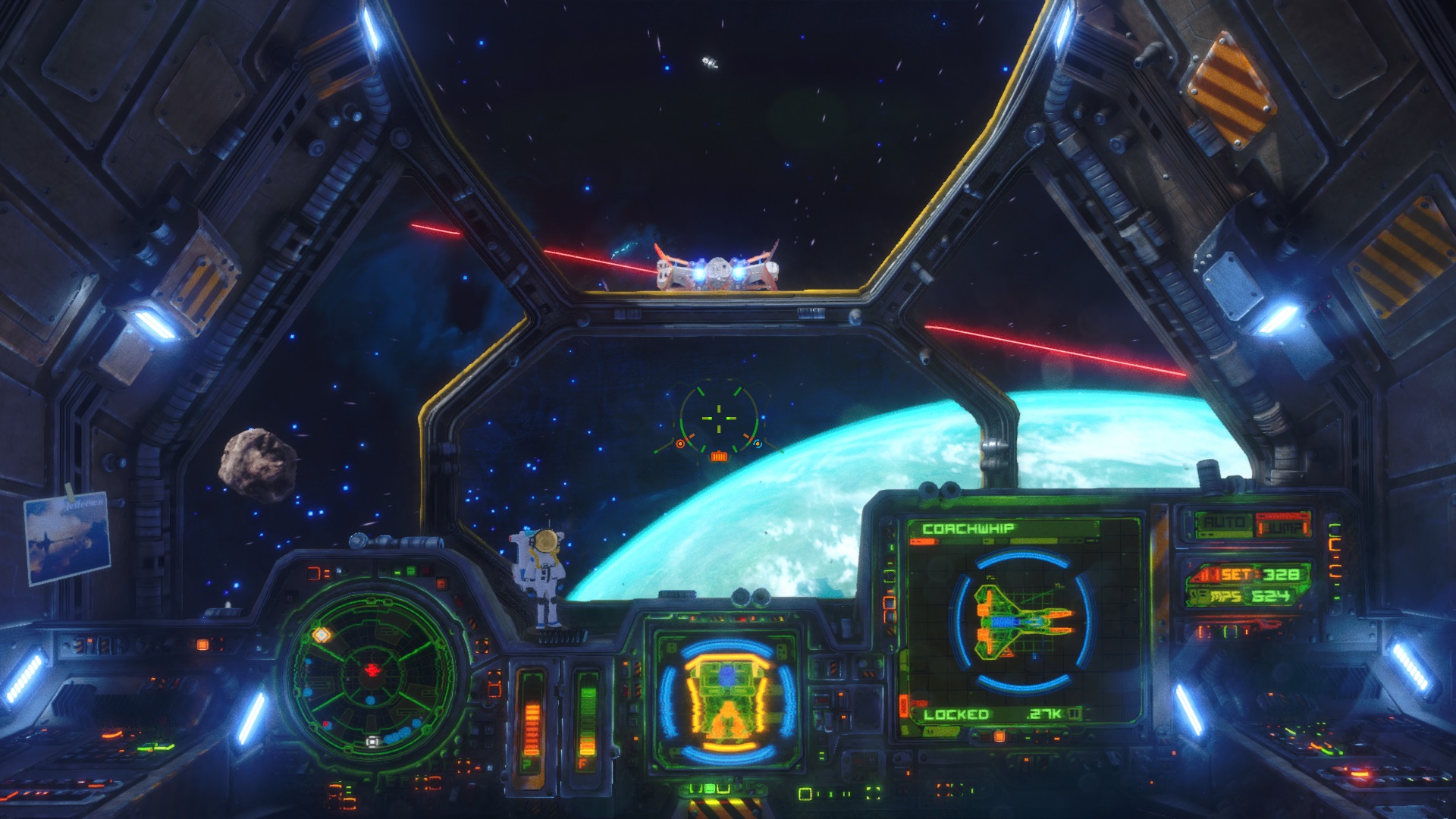 Rebel Galaxy has two fixes for this that immediately transform space dogfights into something you might actually do for fun. The first is “targeting mode”, a simple isometric map you can access from your pause screen that shows where you and all the other combatants are at that moment. It allows for spatial awareness in a way that the dashboard radar screens of most space games simply don’t. But the real stroke of genius is “autopursuit”. Autopursuit is a button you press (the trigger on your gamepad, if you have one) that will simulate tethering your ship behind your target. Your target can twist and turn and double back on you, it can dodge your lasers and missiles, but you will no longer have the frustration of frantically spinning your ship around all six degrees of movement looking for that one lost dot. Visually, it means you can get right up close with your enemy, making the dogfight feel far more like the battle of wits in your imagination. Of course, autopursuit is entirely optional if you prefer your dogfights old school style, but it doesn't neuter the challenge by any means (which is a nice way of saying I still died a lot).

The upshot of all this was that the freighters of Rebel Galaxy Outlaw had their distress signals answered much more often than those of pirate-stricken spacers in other virtual galaxies I've visited.

Beside combat, the other niche Rebel Galaxy Outlaw has carved out from the rest of the giant-space-sim genre is story. In Elite Dangerous, there are ongoing narratives of invasions and political intrigue, but as a player, you're about as able to affect them as you are the ones happening in the real world. On the other side of things, No Man’s Sky’s narrative feels like proper old-fashioned sense-of-wonder scifi, but is more like a series of prose poems than a story. 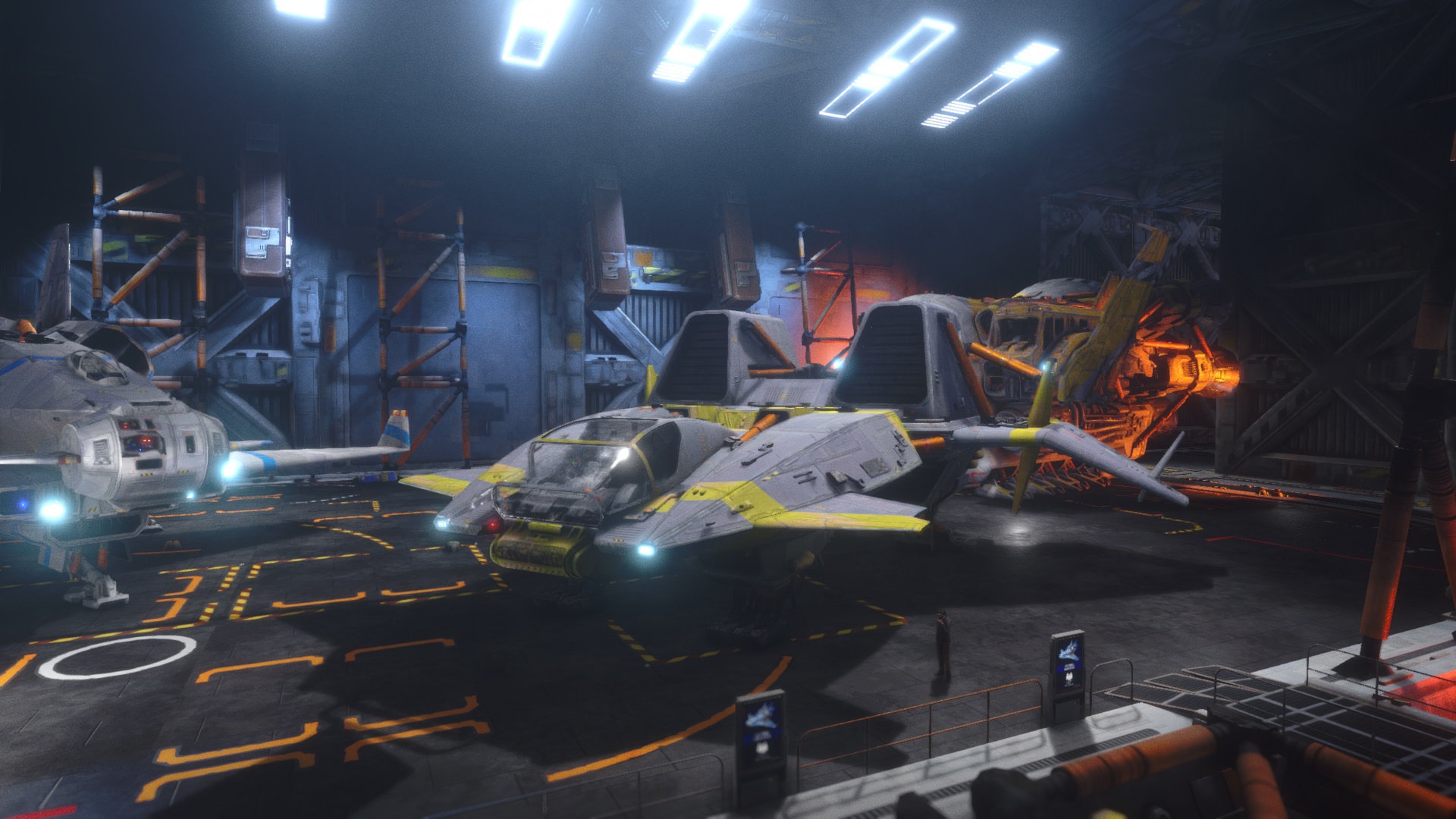 Yet with no irritating multiplayer nonsense to get in the way, Rebel Galaxy Outlaw is free to give you an actual character with needs and goals, and a place in the world.
That world is a familiar one. We have a network of jump gates that allow faster-than-light interstellar travel, but the computer monitors all have the resolution of a Nokia 3310 and big clunky 80s keyboards. The star systems are all named after places in the American south, there’s often twangy acoustic cowboy music, and it’s entirely possible the developers are fans of a cancelled TV show that rhymes with SpireSpy.

It’s all familiar furniture, but it’s crafted lovingly - the space stations each have their own feel, from asteroid bases to trading posts, to casinos with habitation rings shaped like giant roulette wheels (the developers also like Cowboy Bebop). One thing I’ve felt deprived of in other space sims is the ability to go to the pub, and Rebel Galaxy Outlaw meets that need, with a wide selection of dives where you can go to get gossip, word on bounties, or potentially tips on heist-able freighters. There are slot machines and Asteroids arcade games, and a surprisingly addictive simulation of pool. In fact, I’m genuinely considering starting a new game just so I can see how far I can get as an interstellar pool hustler. 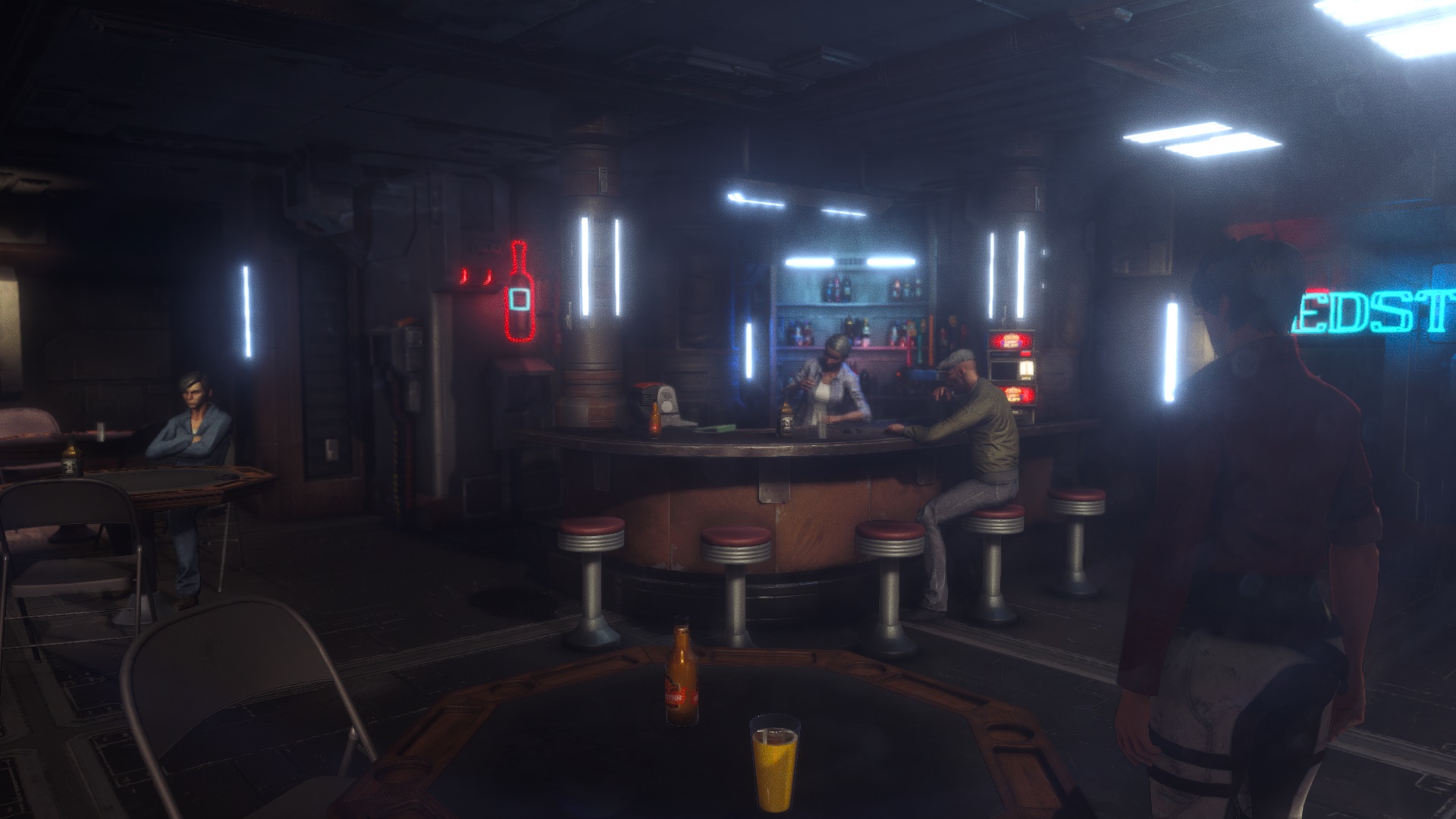 That said, the familiarity of the universe still leaves it feeling a little thin. Juno, your hard-bitten, tough-as-nails gender-flipped Han Solo/Mal Reynolds is a great concept, and the straight-out-of-John-Wick “back in the game to avenge your dead husband” angle feels fresh, but most of her dialogue boils down to... well, complaining. Yes, it’s a character archetype that’s typically on the grouchy side, but you need to offset that with a bit of levity. Even dark, broody Mal couldn’t hide the fact Nathan Fillion was having the time of his life with the role. The aliens of Rebel Galaxy Outlaw are a bit of a let-down, too. They aren’t given much substance, and when they are, it can veer a little towards the dodgy old trope of "non-humans as stand-ins for ethnic minorities" (this is somewhat self-aware, with lines such as “I understand we all look alike to you”, but I'm not sure that makes it much better).

These are relatively minor blemishes. Still, with a bit more depth to the worldbuilding, and a bit more time spent on the dialogue and storyline, this game could have been an absolute gem on the narrative side. 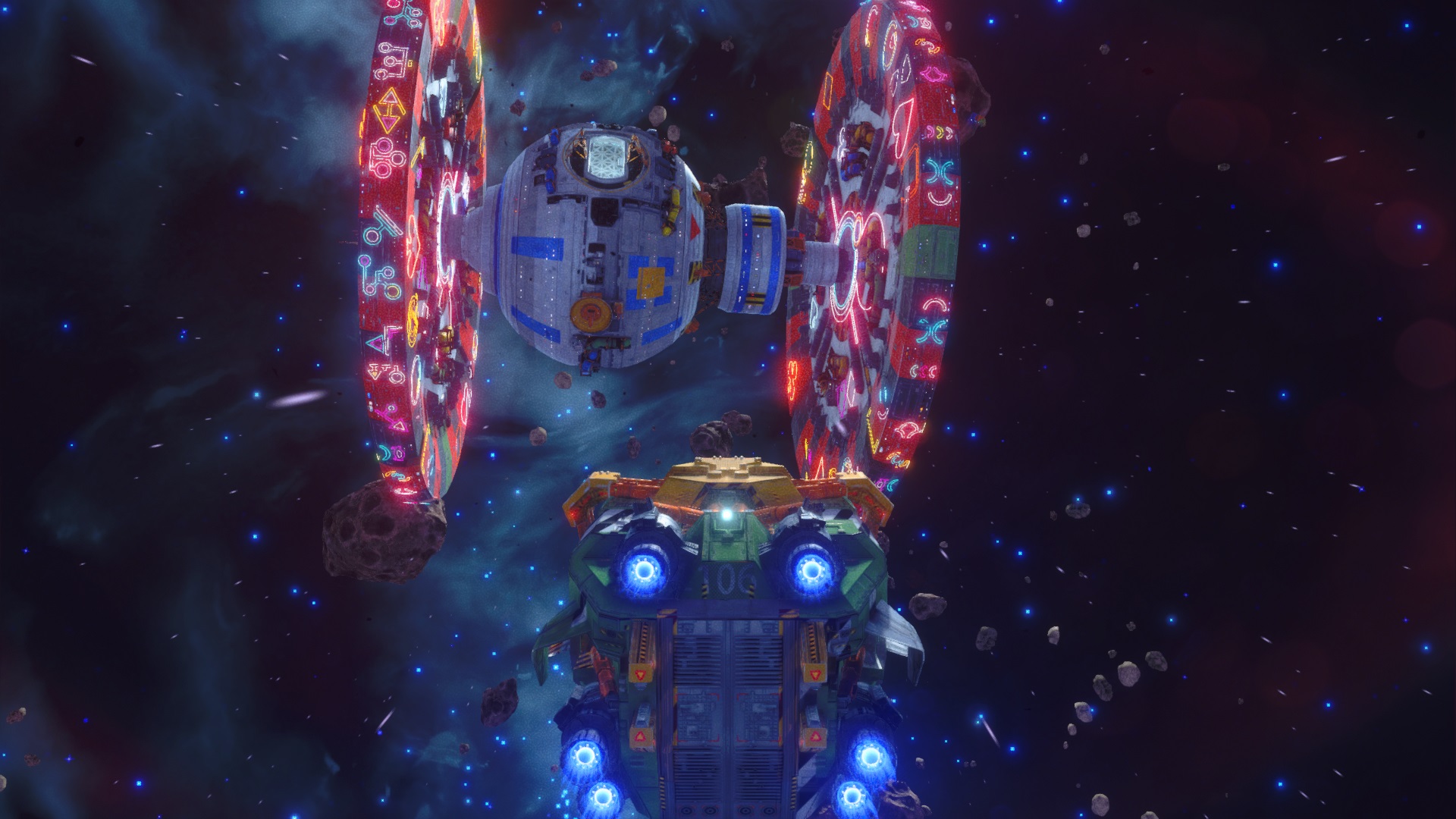 It's certainly very pretty, though. Which is to say, the spaceships are all as ugly as sin. Because that's how I like my spaceships - massive, often-asymmetrical hulks that have been banged together without a moment’s thought for aerodynamics. On top of that there’s a ship-painting tool that's less a “tool” than an entire piece of design software hidden inside the game, and which is admittedly daunting to use.

Its entry into the cockpit-based, open-world, space-trucking genre puts this game in an arena with some heavy hitters, ambition-wise. Nevertheless, with a development team of five people and a price tag of only £24, it seems fair that it's less of a world to live in, and more one to visit for a while. And I'll certainly be coming back here - next time I want to pick a fight.