RimWorld is a game of perfect catastrophe. Not simply a homage to Dwarf Fortress, or a skin graft of Prison Architect, it has spent five years of early access becoming its own simulation of farce, hopefulness and inevitable disaster. Today, it's finally "done". It starts as an opaque management game about the marooned survivors of a sci-fi shipwreck. But it quickly harnesses the darkness and humour of an absurd Yeatsian apocalypse. Things fall apart, the centre cannot hold, Landoa has raided the drug stash again. And through all this, what rough beast slouches toward your settlement in a manhunting rage?

Oh, it’s a tortoise. It's gonna take a while.

This game is a story-maker, and I’ve told some of its tales before. The saga of a man called Bogdan, running a bad hotel in the middle of a desert. The tragedy of a child pop star called Min, who had the wrong arm amputated by accident (don’t worry, it was replaced with a steel claw). I haven’t played a scenario in this drama generator that wasn’t populated by curious characters, all doing the wrong thing at least once a day.

At it’s heart, it works because of the conflict between its pawns – the wee men and women who scuttle around, cutting trees, planting rice, building billiards tables, mining steel, taking drugs. The socially stunted reprobates and heroic dunces who are living as best they can amid the slowly-improving settlement being designed by the player. You have a good amount of control over your colonists. You can tell them to priortise one task over another, for example, sending them to haul stone boulders out of a cavern instead of playing poker with their mates. And you can set which tasks they ought to do, and in what order, using a numbered menu (more on the efficacy of this menu later).

But importantly, you don’t have total control. Some characters won’t be able to socialise properly, others can’t research technology because they aren’t educated, and some won’t do any work at all, because they think it beneath them. In the scenario I played for this review, my clan, who are called 'Team Murder (When Necessary)', rescued a man called Tyla from some bandits. When we got Tyla back to Hoveltown, we found that he had grown up as a medieval noble. He refused to do any work. He would only hunt or sit at a desk and study. 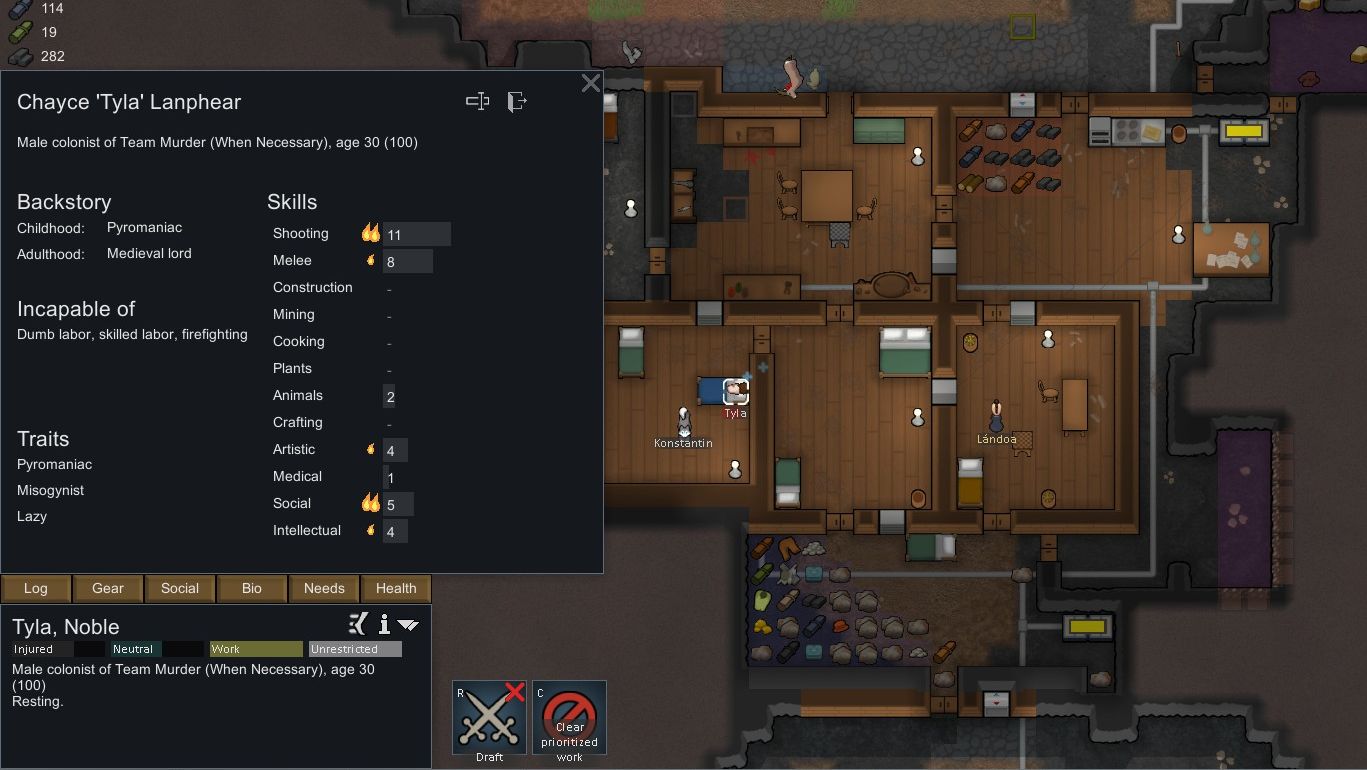 It’s this semi-control over settlers, as well as their flaws, that makes management of them so full of strife. But good strife. Tyla also had gut worm, for example, and would need to be treated for it every two days or he would walk around vomiting and eating twice as much as everyone else. Rather than suffer a house full of puke and the steady loss of all our medicine, I banished Tyla from our settlement. The next day, one of the other colonists had a nervous breakdown from guilt. 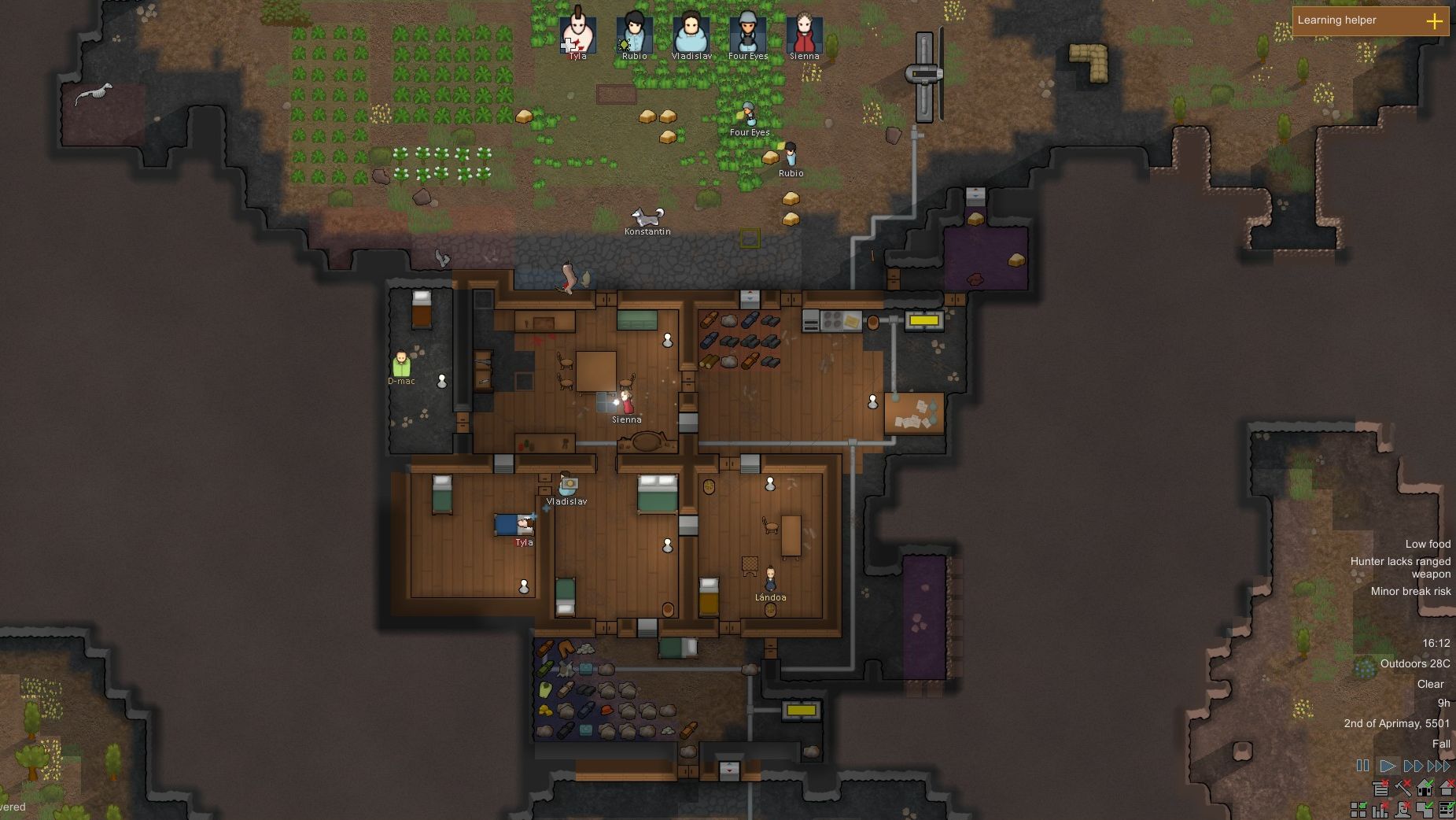 The minute-to-minute base-building is still half the game. This involves dragging out plans for walls, plopping down furniture, or building coolers into the walls so you can make a giant walk-in refrigerator to keep the potatoes from rotting in the sun. Solar panels and wind turbines generate power, and electrical cables bring light to your bedrooms and juice to your defensive turrets. Much of the managerial satisfaction comes from making a colony that runs with grace and efficiency. But here such efficiency only exists on paper. Were the colonists of RimWorld as robotic as the traffic of Cities: Skylines, or as lacking in character as the cold workers of Frostpunk, this would simply be another machine-like management sim to be exploited and perfected until you create one of those terrifying SimCity dystopias were everything runs on an infinite smoggy loop. 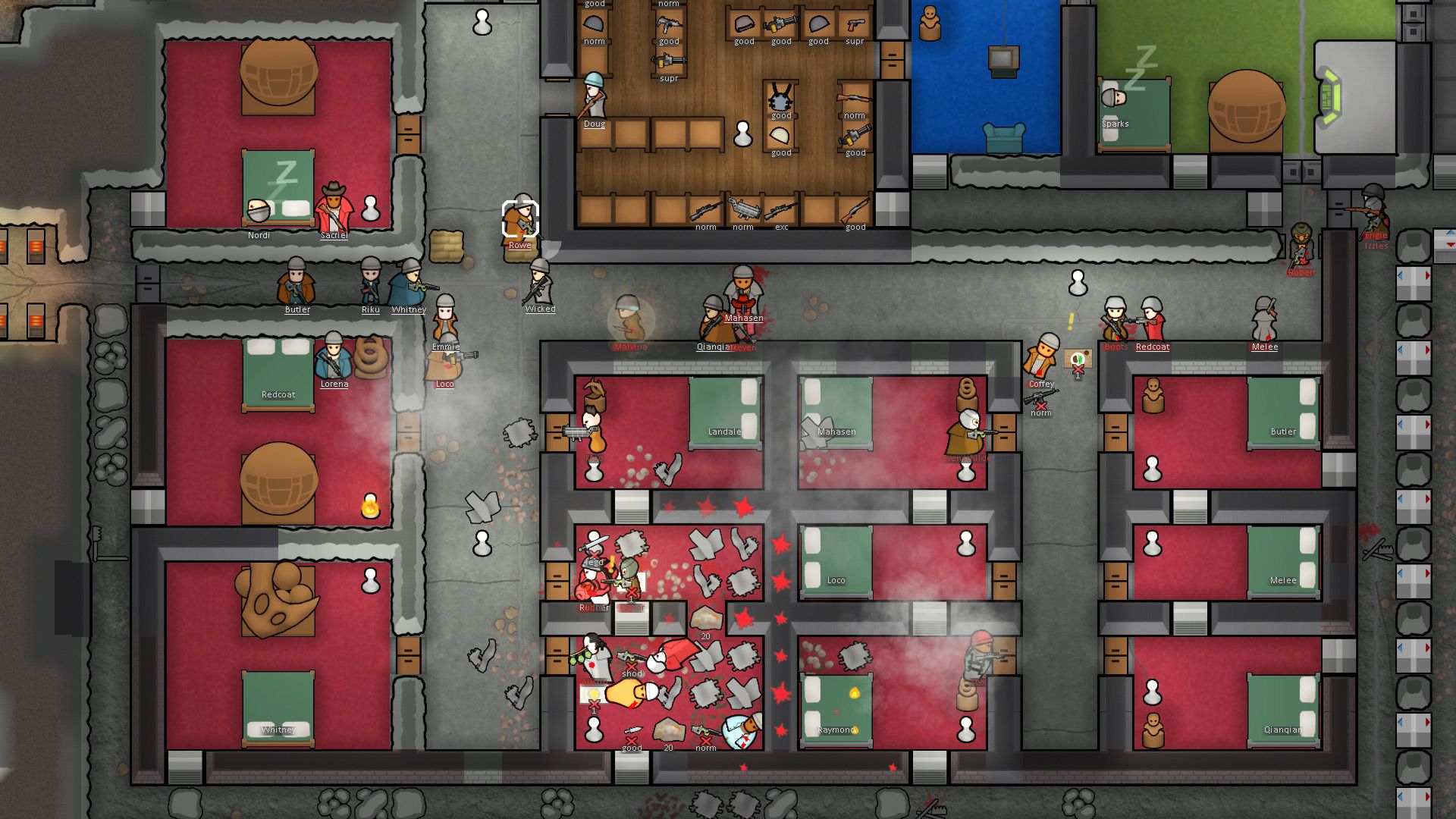 But they aren’t. They’re tiny human-like eejits. Eventually, something will go wrong. One of your colonists will have a psychotic breakdown. A band of marauders will attack your base. Lightning will strike in the wrong spot at the worst time. Landoa will try to escape her prison cell and drink all the psychite tea again. For heaven’s sake, Landoa.

Often these disasters can be corrected. Fires stamped out, cancerous growths surgically removed, raiders repelled. But when multiple disasters occur at once, or one after the other, the whole settlement enters a cascade of calamity. Your best gunwoman gets her leg cut to ribbons in one of your own traps, therefore there’s nobody to stop the mad cougar savaging your only cook to death, therefore everyone has to eat raw rice for breakfast. Fuck-up ergo fuck-up. 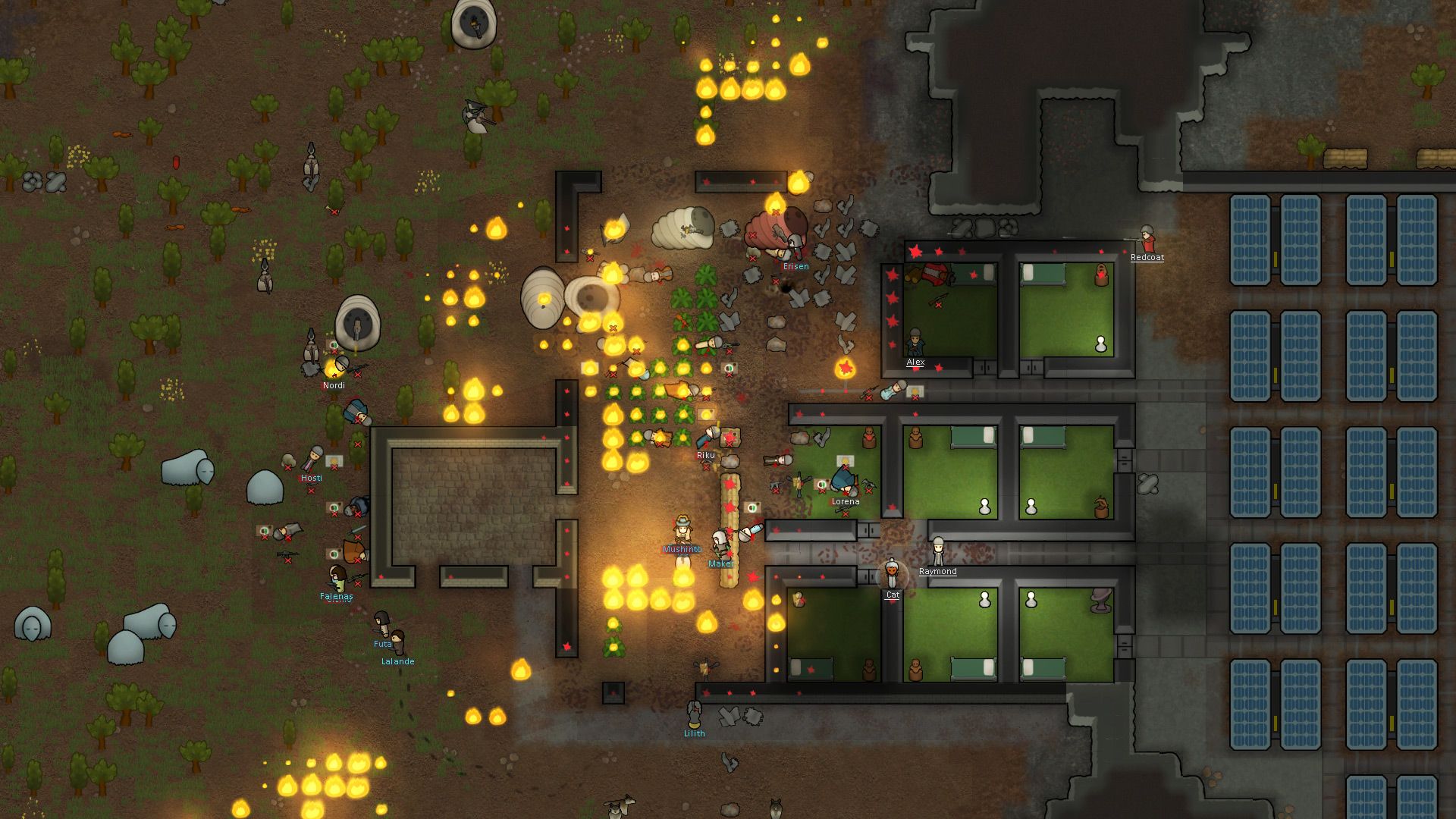 It’s like observing and interfering in an ant colony. You can funnel the insects one way or another, you can design their tunnels and abuse their pathfinding abilities. But you’ll never be queen. You’re never really in control. New players will feel that more keenly, because this is often not a well-explained game. There’s a tutorial now, and it tells you stuff based on context. For example, if a wall starts getting bashed by a rowdy raider, a small tutorial box might pop up in the corner and explain how to repair things. You mark it as learned and move on. But much of the basics might still be hard to grasp. Not least the “Work” window. 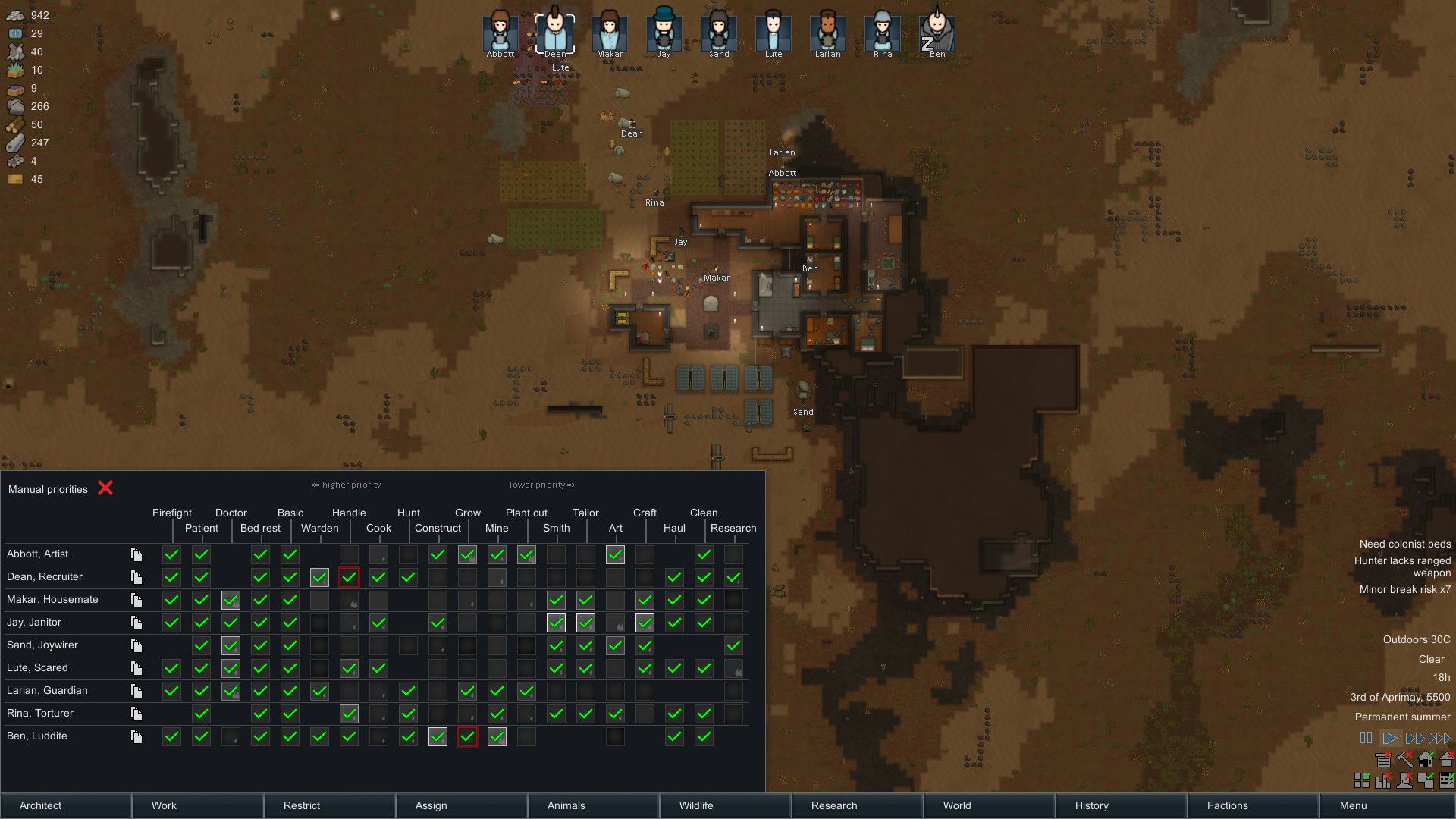 It’s the most important windowpane in the whole game, and it’s not so difficult once you understand it. Still, it’s never given enough attention in the tutorial. New players: if your pawns are doing something stupid, like calmly cutting stone blocks while the ground next to them is on fire, it’s because your “work” priorities are set to care more about granite and less about third-degree burns. That, or your stonecutter might just be a pyromaniac who never puts out fires because they find them too fascinating. Did I mention Tyla, the snobbish noble with gut worm, was a pyromaniac? I’m glad I banished him. 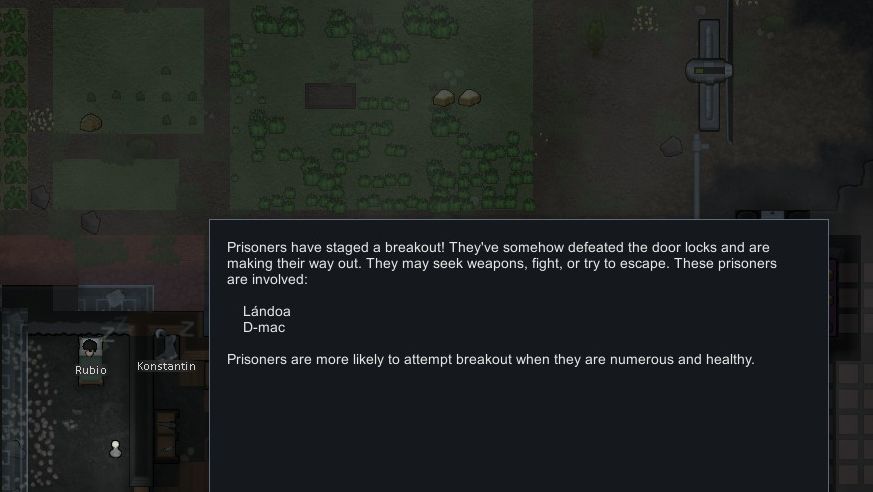 The tutorial might be thin in places, but there have been other updates. You can form caravans and send them on journeys to other settlements, or on one-off missions to rescue people from slavers. In the early days of Hoveltown, we were told about a starship that was buried near the north pole of the planet. It was an impossible journey to make, especially back then, when we spent most of our evenings eating turkey meat off the floor. Also, I was discouraged from such a journey by the name of the settlement closest to the snowed-in spacecraft. It was marked with a skull and crossbones. It was called “Torture Township”. 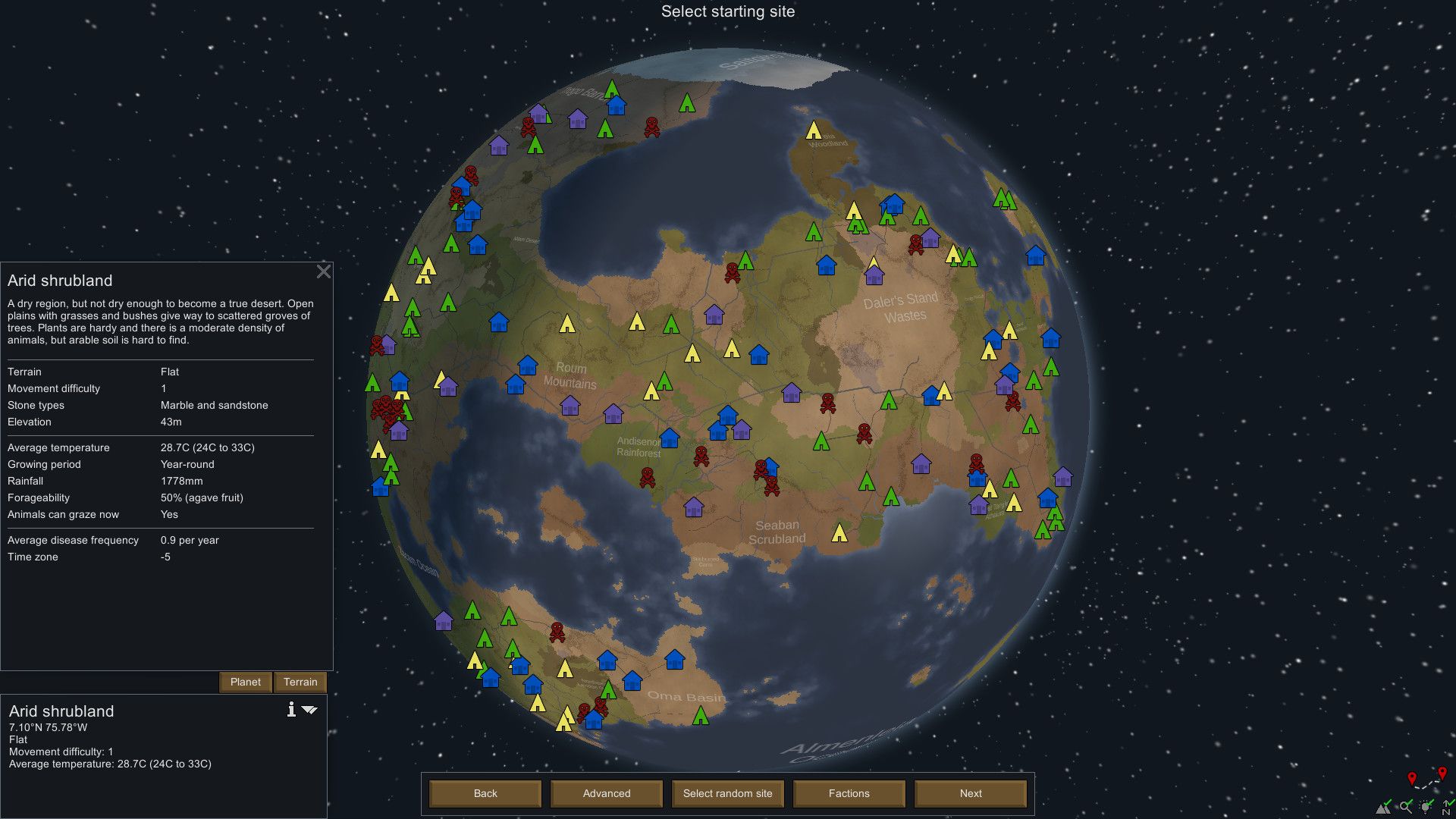 But these randomly-generated worldwide events mean that not everything is confined to your single-screen colony. You can trade with other factions by leaving your own town, for example, rather than waiting for a horde of milk enthusiasts to come sell you calcium. You can attack hostile groups on behalf of friendly factions (in exchange for hyper-advanced medical supplies, or whatever). Many of these sallyforths can and should be ignored, especially in the early days. How can you launch an assault on bandits when all the manpower you can spare is a sad intellectual with a knife? But this is a slow-burning game. There will be more misadventures later. 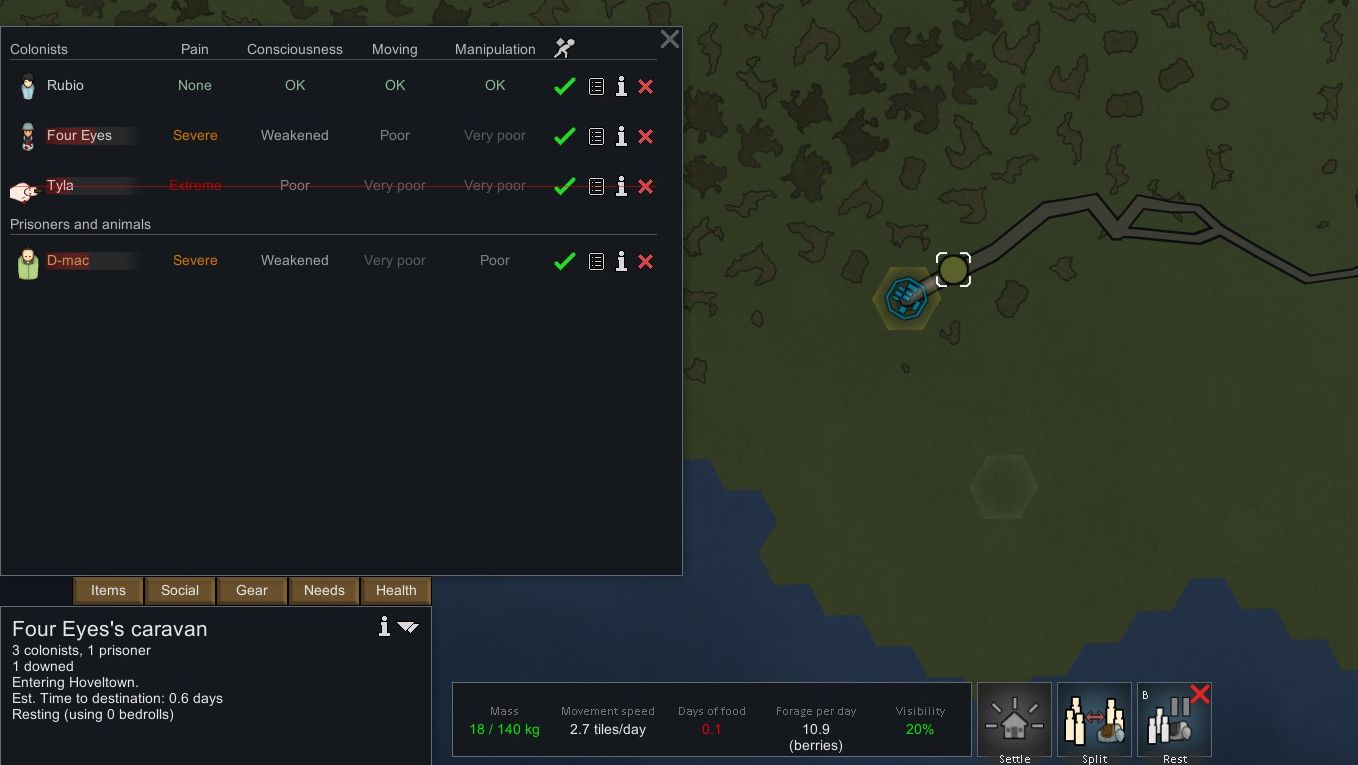 What hasn’t changed much since the game's birth is the presentation. RimWorld has the user interface of a schoolboy IT project. It’s an IT project that would be graded A++, yes, but still. It’s boxy, it’s plain, it doesn’t care to look good. It just does the job. It shows you the numbers and the letters. It explains things when you hover over them. This gives the whole game a sense of roughness and, even now, a feeling of being unfinished. I can imagine people looking at these screens and thinking: “What is up with these spreadsheet buttons?” But honestly, this matters so little. These workmanlike buttons and boxes are an acceptable price to pay for a game where your entire colony can be brought down by a rabid raccoon and an inopportune heatwave. 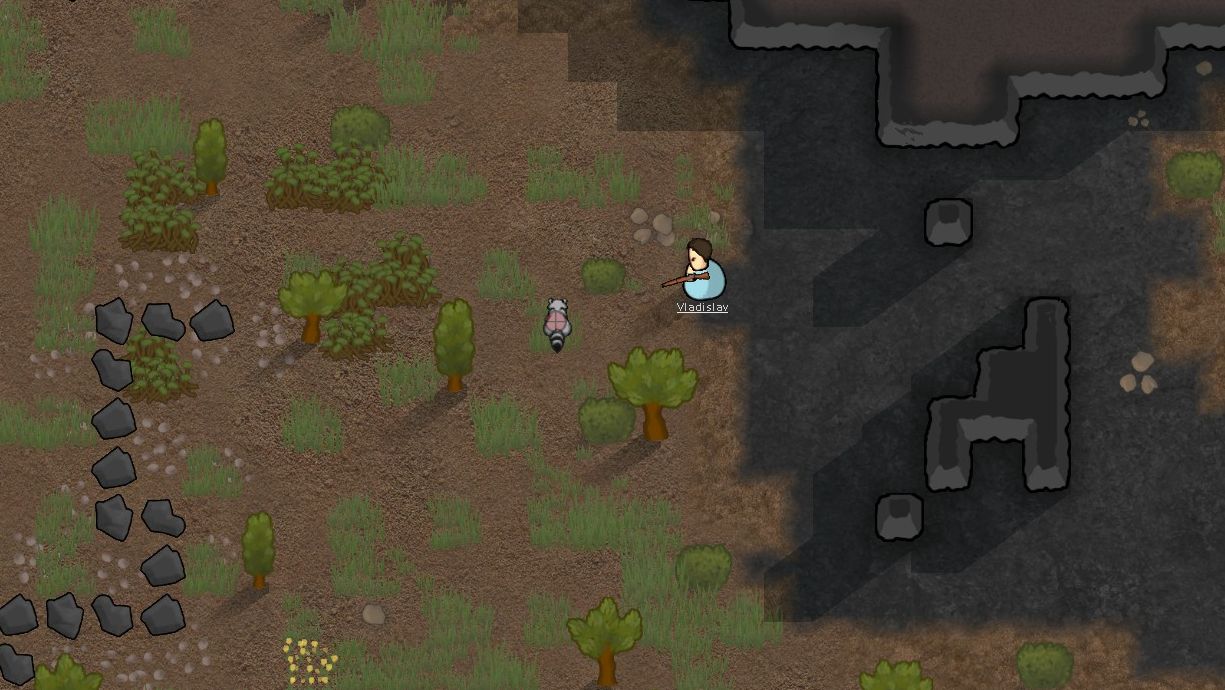 RPS mechanic man Alex Wiltshire has already dissected what makes the drama of these ant people so potent. Basically, it’s our tendency to make a story out of random, unconnected events. Every human has a little seamstress inside them, sewing a tapestry, throwing away characters or incidents which don’t quite fit while sewing and weaving together the most poetic mishaps or kind deeds. I could tell you about the time Rubio and Four Eyes were waiting for a bandit raid to break down the town gates, and Rubio (who is a depressive intellectual with an ugly face) started a deep discussion about pointlessness. It fits his character. It’s the kind of thing Rubio would do in the middle of a stressful siege. He’s a wanker. I wouldn’t necessarily tell you that one minute later he started talking about art history. Although, maybe that fits too. 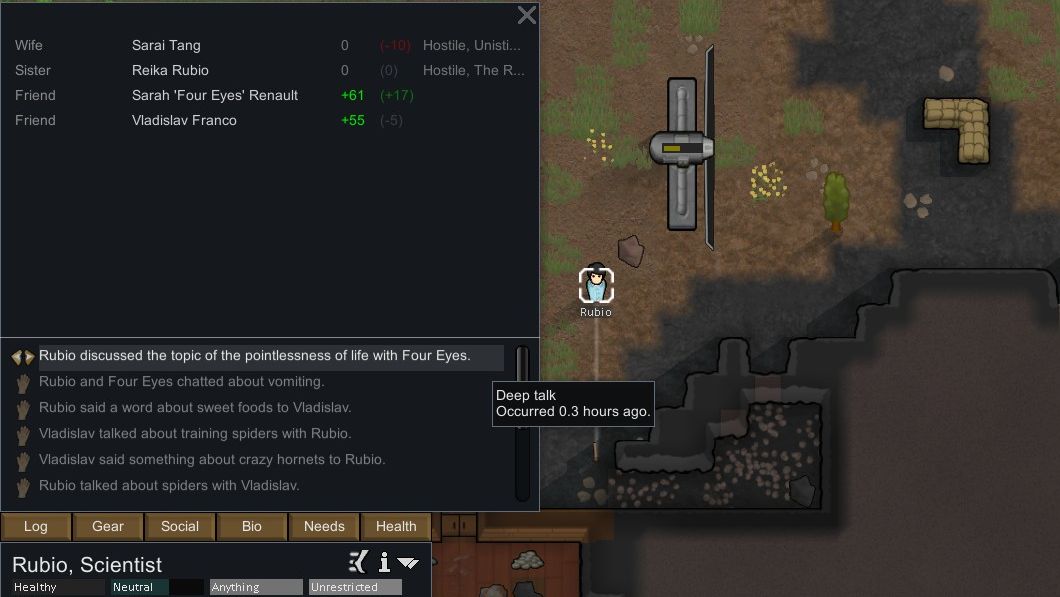 The depth of its simulation is what allows for such weaving to happen. Click on the “social” tab for any colonist and you get a rundown of their conversations (my colonists mostly talk about shrubs). Inspect their “bio” and you’ll get a complex salad of idiosyncrasies (did you know Tyla was also a misogynist?)

That commitment to simulation has meant that the men and women of RimWorld inherited questionable gender roles, and I haven’t been able to tell during my refresher game if this has been changed, because the rules governing these little people’s sexuality are hard to notice. All I know is that Four Eyes (genius physicist) fancies Vladimir (idiot servant) simply because he has a pretty face. In short, I won’t excuse the code of this game for its simplistic effacing of bisexual men, but I can still love it for its storytelling ability, especially when I see Rubio having a psychotic episode, walking around after Four Eyes, endlessly insulting her “for her honesty” as she tries to meditate. 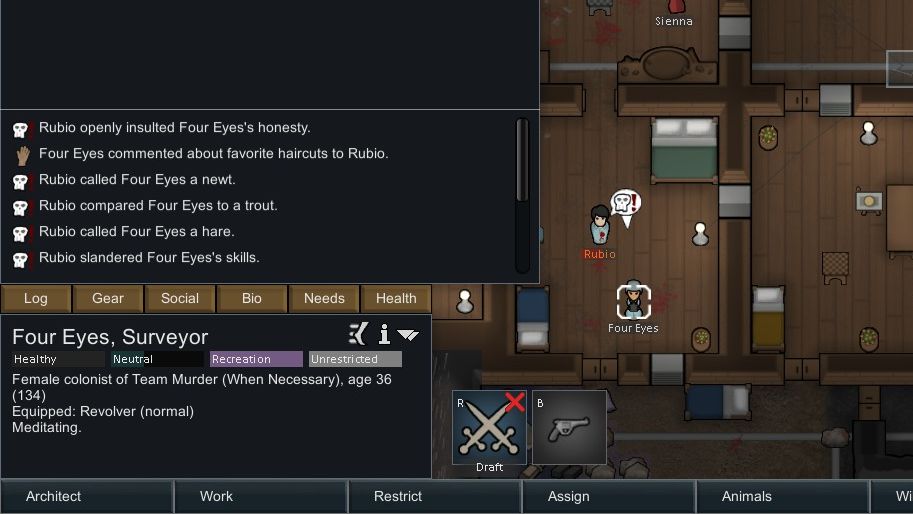 RimWorld is a wonderful fiasco (and I haven't even mentioned the RimWorld mods that can make the game even wilder). It's a slow-paced anecdote farm that takes the dwarves of a certain fortress and dresses them up well enough to get a job doing something other than being a bit of ASCII that mines the walls. It can be confounding at first, not to mention the ugliness of those grey boxes. But it doesn’t take long to realise that this is something special. A management game that feels like you’re in charge of people – beautiful, flawed people – instead of a handful of impersonal bots. And it’s those little people who will keep you going.

At least, until the tortoise finally knocks on your door.