It's been 28 years since 1992's Dune II, and like many people out there, I'd long ago stopped seriously hoping for another videogame to do justice to Frank Herbert's legendary science fiction series. So it's with surprise and delight, then, that I can tell you the best Dune game in three decades is here... and it's a procedurally generated sitcom, played through a colony management game. Because while RimWorld: Royalty, the first DLC for Ludeon Studios' space settlement hit, isn't jaw-dropping in terms of the raw bulk of features it adds to the game, what it does for the game's atmosphere - for me at least - is properly magic.

RimWorld got popular, I think, because it's a well-tuned machine for generating stories about people thrown together in a survival situation, built on top of a small-scale, compulsively satisfying, city builder game. It had a fairly exemplary ascent through early access, with regular, substantive content updates. And even when it seemed those were at an end with the 1.0 release at the end of 2018, its modder-friendly design kept the party going until last week's surprise release, not just of Royalty, but of a free 1.1 update too, with its own substantial feature list.

It's one of my favourite games, for all of these reasons. It is, I'll say with whatever authority you'll allow me, the only successful attempt at making a more user-friendly iteration of the Dwarf Fortress formula. But with that said, if it had attempted to directly replicate DF's theme and atmosphere, I think it would have pissed me right off. Instead, RimWorld anchored itself on a science fiction setting that started off extremely vague, but ended up surprisingly coherent.

Whoever your dice-rolled colonists happened to be in any given game, they existed in the context of a sprawling, far-future human diaspora, long past the point of being governable as a whole, and filled with isolated cultures fallen into their own rhythms of history. Your little group might comprise an illiterate warrior from a medieval world, a paleolithic herder, and a cybernetically-enhanced pop star from a distant, high-tech enclave. In later iterations of the game, you'd find yourself building settlements on the ruins of highways, laid by earlier waves of human settlers whose civilisations had long since collapsed, and the whole thing had a very Banksian/Dune-ish/Warhammer 40,000 sense of scale.

Enter Royalty, then, in which your colony falls under the territorial auspices of some kind of decaying stellar empire, and begins to interact with its baroque social hierarchy through RimWorld's new mission system (also included for free in the 1.1 update). The nature of this empire will vary a little depending on what your game generates, as will the missions. But by and large they'll be a haughty, decadent society possessed of extraordinary technology, coupled with feudal politics and a brilliantly retrograde cultural aesthetic. They are Dune through and through, and it brings RimWorld right into a particular genre territory I can't get enough of.

The mission system is great, too. I was contacted by a dour duchess, demanding I build an enormous stone monument to her sheer blandness - and apart from anything else, the monument construction was a surprisingly nostalgic sniff of Pharaoh's citybuilding vintage. Later, a bunch of raucous young nobles asked me for shelter after they had gotten wankered during a diplomatic excursion to a local culture, and I put them up for three nights, fending off angry bowmen while the sheepish posh boys helped till my fields.

In one genuinely laugh out loud bit of procedural generation, on my second day after crash landing on a planet, a local aristocrat asked if i wouldn't mind looking after their pets for a couple of weeks while they attended to business offworld. The pets were nine elephants. Nine elephants, with bubonic plague. "No problem milord, I'll get right on it" - gives a whole new meaning to sick-o-'phantsy, eh? 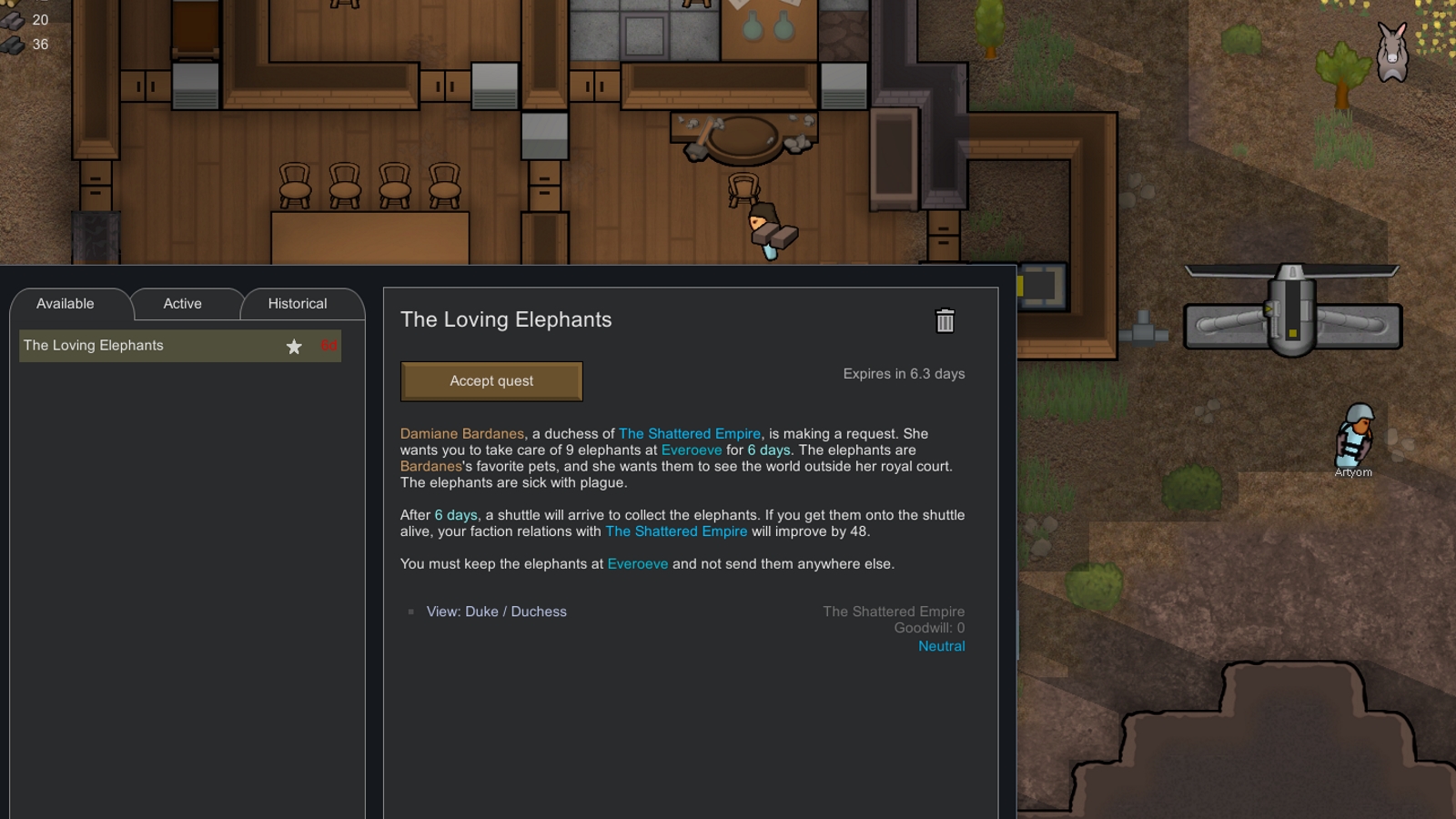 I understand there's currently some tweaking going on with balance around the new quests (there's a lot of hotfixes coming out of Ludeon actually, even though the launch version was pretty smooth by all accounts), but I'm honestly in no hurry to be freed from demands as hilariously onerous as the above.

As reward for accomplishing these bizarre feats, your colonists will receive escalating honorary rank within the empire's byzantine hierarchy - as they climb the slippery ladder of being extremely posh, they'll access perks such as trading rights with imperial settlements, and even the right to call in some of the empire's elite armoured cataphracts, in the event of a particularly taxing raid. Once you're finally at the top of the tree, you'll be able to take on the ultimate challenge - hosting the High Stellarch themself at your humble colony for a season. Accommodate Their Grace in the manner to which they are accustomed, and they'll take you away in their starship to live a life of unbridled luxury, adding a new win condition to the game.

The other, parallel reward system is access to an ever-more-potent selection of the psychic powers that are de rigeur amongst the galactic elite. These are unlocked with a high tech cranial implant, and allow their bearer to do things like make their enemies vomit, raise walls from the ground, or turn invisible. Along with the wealth of new high-tech prosthetics included with the new patch - such as drill arms and venomous fangs - and new weapons like "plasma swords" (lightsabers) and the marvellously named Zeushammers, the psychic powers allow for a much broader spread of combat tactics. Which you'll need, by the way, since the ever-bothersome Mechanoids can now build bases of their own on your map.

I've seen people moaning that quests are rarely worth it for the rewards they give, and I guess they might be right? But if you're playing RimWorld to win, you're not really playing RimWorld. Min-maxing and optimisation seems completely pointless in a game about generating dramatic interactions between little bobble headed space fools, and if it (rightly) doesn't interest you, you'll find the new Royalty quests greatly amplify the RPG elements of running your settlement.

And that brings me to the other real masterstroke of this DLC's theme. When your colonists begin gaining imperial ranks, you see, they get demanding. It starts with demands for slightly better bedrooms, which seems fair enough. But before long they're decreeing their fellow settlers make them a human leather corset, or start throwing wobblies because they haven't got a uranium harp. In the end, they'll insist on having throne rooms, and gargantuan thrones from which they will make speeches to the people who were once their fellow, dirt-dwelling raccoon-stranglers. It's at once a great driver for more emergent interpersonal weirdness, and a new set of challenges for otherwise too-stable mid- and late-game settlements.

It also reminded me of the notorious Dwarven Nobility from the 2006-2007 era of Dwarf Fortress - a feature so simultaneously brilliant, and spectacularly busted, that it was phased out of the game as the years went by. RimWorld: Royalty brings its spirit back in a major way, however, and I'd be very surprised if it wasn't, at least in part, the inspiration for this DLC.

There's more, of course, and it's definitely worth pointing out that Royalty brings back RimWorld's music composer, Alistair Lindsay, to double the game's gorgeous, space-western ambient soundtrack. But feature-wise, you're pretty much looking at what I've described above. For fifteen quid, I think that's fine? I've had about 16 hours on it so far, and not started to feel I've begun tapping out the new content yet. I've seen people protest that you can get equivalent amounts of features for free with mods. And, erm, yes. You... can? I just don't see how that's an argument against buying Royalty.

Here is a completely unhyped, completely straightforward expansion - in the old-school sense of the term - that adds a few strong new systems to the game, as well as a whole bunch of new variables to feed into its various narrative generation mechanics. And thanks to the endlessly repeatable, emergence-focused creature that RimWorld is, it's enough to completely refresh your sense of compulsion, even if you felt you'd done it all to death with RimWorld 1.0. Hurry up and buy it, peasant, or those fucking elephants are going to die.