The molotov cocktails and pixel fires of Riot – Civil Unrest have lit up on early access. It’s an RTS of street tactics where you control either rioters or the police, seeking to control the plazas and highways of Egypt, Spain and other nations grazed by disorder in the past decade. It focuses on real world popular uprisings and protest movements like the Arab Spring, the Indignados, and the environmental protesters of Italy and Greece. Because of this, you might expect it to be a political powderkeg. But Riot not only manages to say nothing noteworthy about any of these conflicts, it also shows little competence as a game.

It’s an RTS of limited means. The story mode gives you a few levels in each country and asks you to control baton-wielding riot cops or a crowd of protesters. The police are split into specialist units. An assault class can charge at the protesters, laying into them with truncheons or turning back early, happy to have scattered the crowd with a forceful advance. A shielded class push slowly forward, displacing civilians by marching in a disciplined line and shouting. Finally, a ballistics unit can fire gas canisters, plastic bullets or (in some cases) live ammo into the crowd. 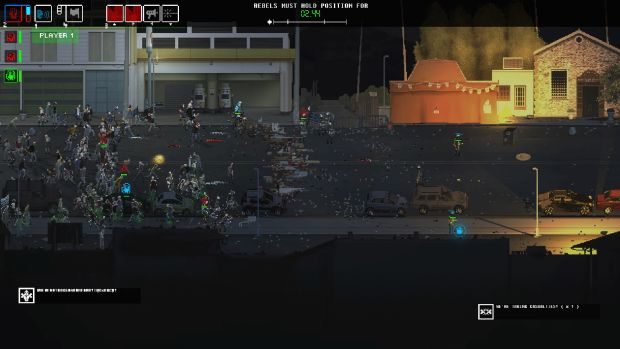 By comparison, the grouped protester units are straightforward. They have greater numbers but are limited to either violent or non-violent, an icon above their heads depicting either an open palm or a closed fist. This limits what each group of protestors can do. Only violent units can throw petrol bombs or rocks, for example. One of the most useful tactics for protesters is to sit on the ground and raise their hands in a ‘hold position’ stance. So long as morale is okay (a small, barely noticeable meter next to the groups icon) the unit won’t flee. This is important, since the objective on the single-screen map is usually about locking down an area, preventing the cops from advancing, or slowly pushing down a street yourself, always against a short timer. 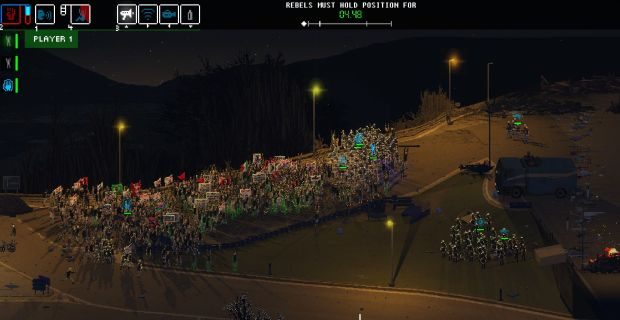 It sounds like excellent fuel for a big street-fire of civil disobedience and martial response. The politically-charged settings suggest it might have something to say about power of protest, responsibilities of government, the lure of street violence or a cocktail of these grey topics. Failing that, the unusual theme might at least galvanise the RTS elements, creating some fresh ideas. Sadly, the opportunity is missed, leaving only a damp, unlit firecracker of a game, both annoying to play and strangely voiceless.

First, let’s look at the gamey bits. The bustling pixel art battlegrounds are as handsome as they have always seemed in tweets and trailers. Crowds surge, flames whip around, the ground becomes littered with flags and protest signs. But none of it can mask the poorly-designed tactical street fighting. All fights come down to a shoving match of furious clicking, and units rarely follow your instructions with any accuracy or reliability. Even selecting units is a pain and the units’ abilities must be activated individually, meaning that to get multiple units to do the same thing in near-unison you have to quickly swap between them using the tab button (or, heaven help you, trying to locate and click on the right unit in the crowd) then activating their power from a button at the top of the screen. For example, if you want to send a volley of gas canisters, you need to cycle through each ballistics unit to do so. If you want to send back a volley of rocks, it’s the same process. There’s no drag-and-select-all, and no way to squash the units together. It’s a small and fiddly issue that comes up over and over again, souring the whole fight. 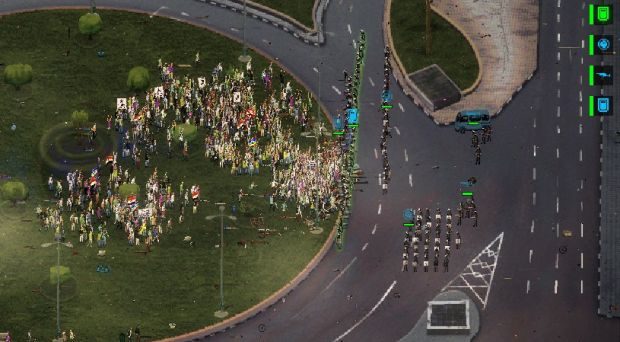 You only fight on a single left-to-right plane, so the struggle always comes down to a back-and-forth. Police move in a rigid square formation, unable to acknowledge that they even have a flank, never mind guard it (or exploit the flank of their opponents). Meanwhile, protesters move in nebulous, barely-controllable blobs. This might be an intelligent observation on the hard-to-control nature of protest, but it doesn’t make for a fun strategy game – a genre which pretty much demands total control over your own units.

And because there are so many people on screen, sometimes hundreds of small humans, it quickly degenerates into a screen of limbs and twitching animations, as hard to read as it is to control. It's difficult to see how your social media broadcast for reinforcements, or your firework, or your handful of arrests has affected the “battlefield” when your screen is messier than a fried egg sandwich. 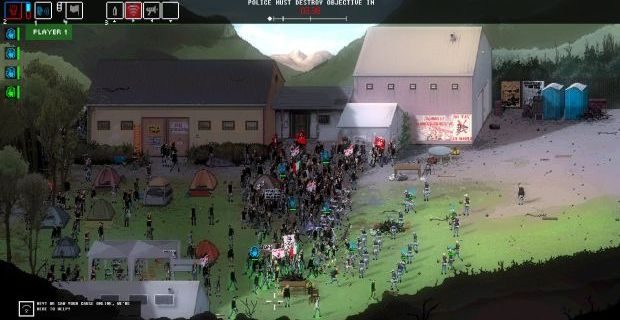 It’s an unpleasant game to play, not because of the action – the beatings, deaths, arrests or shootings - but because how little of the action is readable. Messages pop up in the corner, letting you know what’s going on - “Someone has been hurt! x 7”. But where!? Even in the most overwhelming RTS you can see and hear the deaths of your little killers, you can get a sense for how many are coming this way, or flowing that way, how many are popping like microwaved beans during an assault. Here, you can make sense of very little. I tried clicking on the pop-up messages to see if they’d show me exactly where in the crowd people were being hurt. But no luck.

This is doubly frustrating when you try to direct the battle. One of the protesters’ items is a camera used to snap photos of any violent actions by police officers, which “influences the political result” (basically a score at the end of a level). But it’s impossible to tell where any of this violence is taking place. In more than the intended way, this is a melee.

A critic might be tempted to look at all these complaints and think: well this is what riots and protests are like – scenes of confusion and chaos. But why then grant the player an omniscient view and control over anything at all? If bedlam is what this game is trying to convey, then it succeeds. But it may have worked better as a great-looking, non-interactive animation, instead of a semi-functional, semi-random jostling pit. 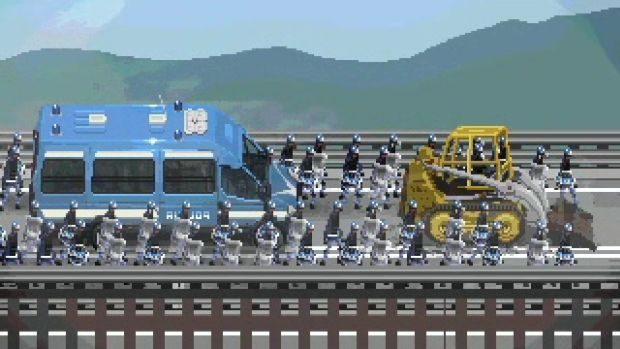 It doesn’t help that it refuses to teach you how any of it works, instead dropping all information in a wiki style infodump and asking you to read vague entries about items you’ve not yet seen applied in-game. The same goes for the police’s weapons loadout screen, in which you’re asked to customise which of the seven truncheons you should use. Let’s see, do I want to batter people with the “Crude Long Baton” or the “Heavy Long Baton” or maybe the “HR Tonfa” or perhaps, today, the “Classic Baton”? This is the typical sin of RPG character creation screens, dumping a load of flowery skill names and cloudy nouns at you, expecting you to know what it all means before you have even seen anything beyond the game’s title screen. At least in RPGs you are often given a rudimentary explanation - a hover-tip or solitary line of text. Here, they are simply names. You may as well call these truncheons “pleb-beating stick" one through seven. 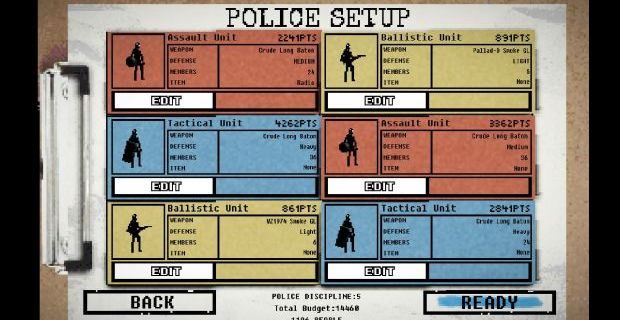 Now let’s look at the game’s theme. It explicitly says, in a big message at start-up, that it wants to be balanced, showing both sides of a protest. I’d argue that it succeeds at the “both sides” part but fails at the “showing”. There’s no inspection of humanity here – no rioters are ever cross-examined for their motives, no baton-wielding police are unmasked. Beyond a dispassionate description of historical events, there’s no humanising element to the hundreds of little pixelised men and women cluttering your screen, no nuance, and therefore no reason to believe the rioters are anything other than troublemakers, or the police anything other than state-sponsored killers. If it is balanced, it is only balanced insofar as everyone is a faceless unit within a mass of writhing limbs. 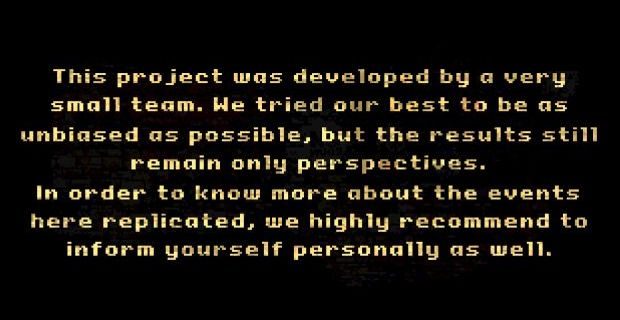 Politically speaking, the only message here seems to be “riots happen”. You can approach them peacefully from either angle. Or you can approach them with force from either angle. The game might be saying: “It’s up to whoever is in charge to decide how things turn out” but that doesn’t mesh with the game's uncontrollable nature, nor does it match reality, where protests often devolve into chaos not only due to some catalysing event – a death or a privation – but also because of a mix of complicated reasons that precede the riot itself. In Civil Unrest, riots are examined but the reasons why riots happen are not, nor are the consequences.

If it does make any kind of political or moral observation, it is to conflate protest with violent rebellion, using the words “protesters”, “rioters” and “rebels” interchangeably, despite these being different things. But even this feels more like an oversight of language than an intended or unintended message. Ultimately, this is a game into which people will read whatever they want to read. Some will accuse it of reinforcing an idea that the state must seek order, even if it means violence. Others will say it portrays ordinary policemen as thugs, or well-meaning protesters as a seething mob. But I can only accuse Riot of being a poor RTS game with nothing insightful to say at all. And I’m sorry that the detailed artwork – which really must be praised - has an imagination and flair that the game, as a whole, doesn’t share.

RIOT - Civil Unrest is on Steam early access for £9.99 but if it's pixel art, politics and decent RTS-ing you're after, you could try Tooth and Tail