I haven’t had a chance to go gallivanting around these broken glass and tear gas filled digital streets yet.  Admittedly, I’m not the biggest fan of the way the developers characterise the protesters as an ‘angry horde’ in the Steam description, but hey ho. The game does seem to be going for some sort of commentary, though, describing itself as attempting to convey its creators experience of getting angry at some trains as part of the Italian NO TAV protests. 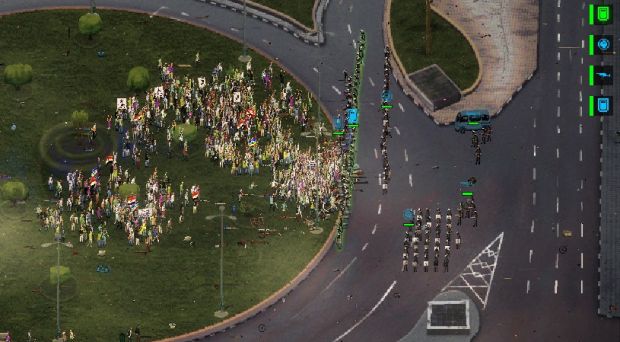 The game lets you pick either protesters or cops, then pits you against the other side in objective based RTS style challenge levels. Brendy had a go last year, praising the detailed pixel artwork, but otherwise deciding it was a “a poor RTS game with nothing insightful to say at all”. And yet, you exist within society Brendy, so who's the real hypocrite?

The game releases with a number of additional levels, downloadable through the Steam workshop. Among them are tiny, pixelated versions of the G20 Rote Flora and Paris Yellow Vests riots, as well as a fantasy flavoured “Orks vs. Knights.” There’s also a full level editor bundled in, in case you feel like engineering your own fracas, clash, or indeed, brouhaha.