There are few gaming mice in this world that make me go, "Ooooooh," as soon as lay my hands on them, but the new Roccat Kain is one of them. Or at least the Roccat Kain 120 does, because technically there are going to be three versions of the Kain launching this September: the entry-level Kain 100, which costs £45 / $50 and has a slightly different design and sensor to the £63 / $70 middle sibling Kain 120, and then there's the wireless Kain 200, which is set to cost £90 / $100.

I'll be reviewing the others in due course, but for now, the Kain 120 is really quite lovely. A large part of that's down to whatever coating Roccat's used for their middle Kain child, which is just gorgeous under the palm, all smooth and soft-feeling. But the other part of what makes this such a great mouse is Roccat's new Titan Click mechanism. Built from what Roccat's calling "an exclusive variant" of your typical Omron switch, the Kain's two main clickers not only feel firm and precise, but they're fast, too - and I think I like it even more than my current favourite, the Corsair Ironclaw RGB. Here's wot I think.

Admittedly, the Kain 120 doesn't really look like much when you first get it out of the box. Stick it next to the Ironclaw RGB's highly sculpted and textured design, for example, and the Kain 120 looks incredibly plain by comparison. I've got the white version on test today, which at least has the benefit of two black side buttons for a bit of contrast and variety, but there's an all-black model available as well if you prefer. 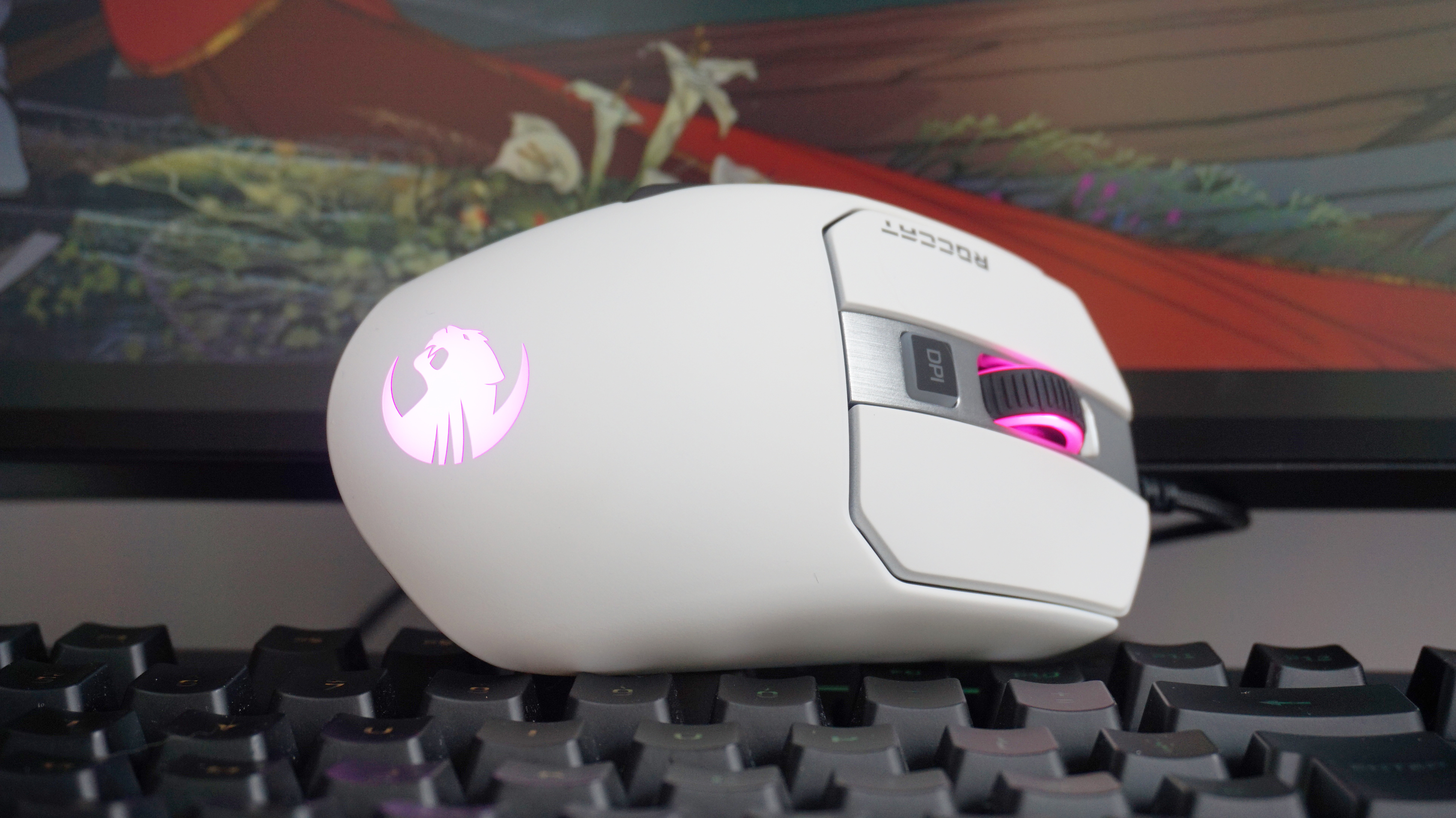 Indeed, looking at the Kain 120 top-down, you could almost mistake it for an ambidextrous gaming mouse, so flat-edged is that inner left side. Shift your gaze toward the rear of the mouse, however, and its pronounced, left-sided hump comes into view, revealing that, yep, this is definitely one for the right-handers. It's a lovely, full-bodied thing, though, filling out the whole of my palm just as effectively as the Corsair Ironclaw, and its two side-buttons are both within very easy reach of my thumb. It's lighter, too, making it easier to swish round my mouse mat while playing games.

And oh, the click! Borrowing the same 'Titan' name as Roccat's new switches inside their set of Vulcan gaming keyboards, the Kain 120's Titan Click mechanism feels noticeably different from the switches inside Corsair's Ironclaw. I don't have to press them down nearly as far or as hard, for starters, and the whole thing feels tight, precise and just a bit "phwoarrr". It's a wonderful sensation, and that alone would have made the Kain 120 something worth shouting about. But when you combine it with its comfy shape, silky-smooth coating and lightweight chassis, the Kain 120 becomes really quite special. 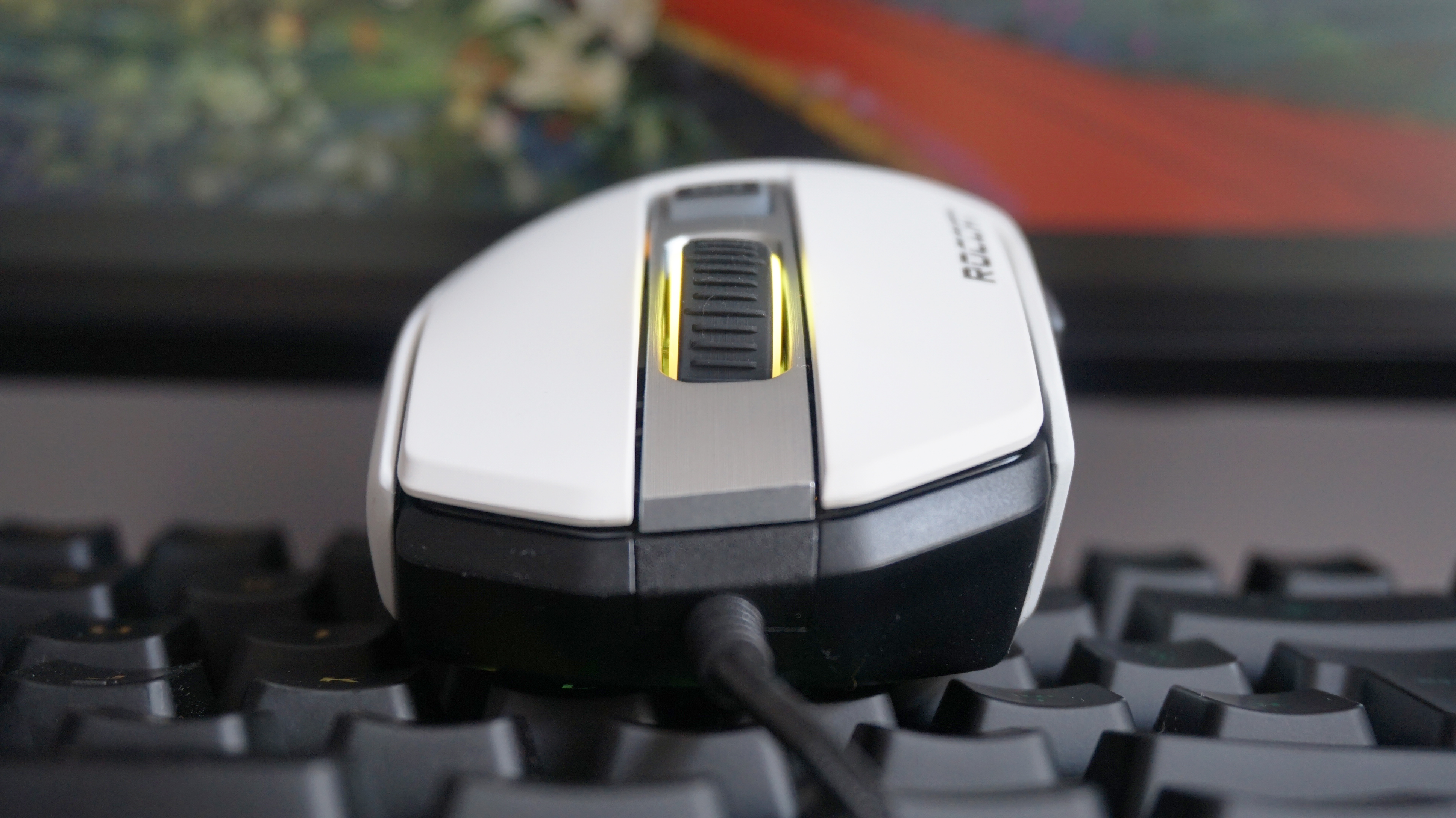 It's also very flexible and easy to customise once you've downloaded Roccat's Swarm software. With a sensitivity range of 50-16,000 DPI and eight programmable buttons (or six if you don't include the scroll up and scroll down functions), the Kain 120 isn't quite as fully-featured as Corsair's Ironclaw (which goes all the way up to 18,000 DPI and has seven proper programmable buttons), but it's still just as practical during everyday use.

Tap the central DPI button, for instance, and you'll cycle through five different DPI speeds. All are adjustable to your liking (albeit in increments of 50), and you can even set different speeds for your X and Y axis, potentially making your vertical movements slower or faster than your horizontal ones. No one in their right mind would ever need that sort of customisation for everyday use, mind (not unless you're deliberately trying to drive yourself up the wall), but competitive, esports-y types may find it handy for FPS games, for example, or strategy and MOBA titles where you need greater control over your map speed. 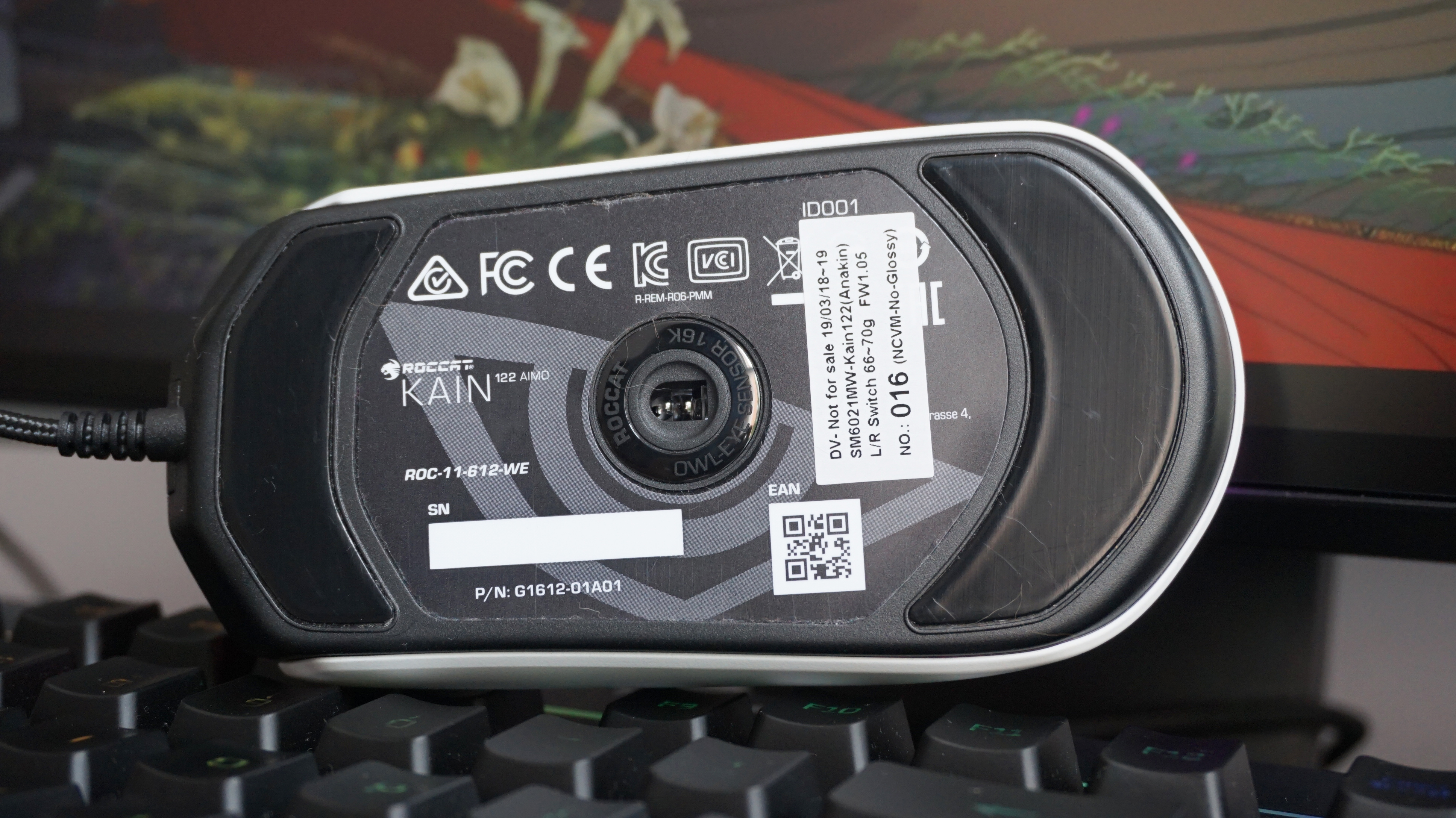 There's a similarly ludicrous amount of detail you can apply to button functions, too. Just like Roccat's Kone Pure Owl-Eye mouse, the Kain 120 comes with the company's Easy Shift+ feature, which essentially lets you assign a secondary function to each button, giving you a total of 16 commands overall. You'll need to have one of them as your designated Easy Shift+ button so you can switch between their primary and secondary functions, of course, but this still gives you plenty of customisation options that puts Corsair's maximum of seven functions to shame.

Roccat's done some of the hard work for you, loading the Kain 120 with four different button presets, but you can personalise each one individually if you so wish, picking from existing macro functions, your own recordable hotkeys and other basic mouse functions to things like OS shortcuts, media controls and various DPI controls. You can also turn one of them into a 'sniper' button by selecting Roccat's EasyAim option, which lets you change the Kain 120's DPI speed on the fly for greater control when lining up head shots and the like in FPS games.

Throw in five onboard profiles, Roccat's smart Aimo RGB lighting that reacts and learns how you play (and of course syncs up with any other Roccat devices you have), and the option to have your DPI or Profile name spoken aloud so you know exactly what settings you've got enabled, and the Roccat Kain 120 does everything you could possibly want - all while feeling brilliant in the hand and fast under your fingers, too. Sure, it's a fraction more expensive than Corsair's Ironclaw RGB, but when the Kain 120 is this satisfying to use day-in and day-out, I think it's worth the extra couple of quid. It's my new gaming mouse winner.