The gushing spring of free games known as Ludum Dare has once again spittled forth a small treasure. Pick it up, rub the muck off, it’s Roulette Knight, an RPG about playing round after round of Russian roulette. There’s no journey from one end of the kingdom to another, no evil lord to vanquish – that stuff’s for SQUIRES. Here, you just sit in a room, slip bullets into a revolver, and pull the trigger for cash rewards and XP. It’s short, silly and fills you up with giddy stress.

The deadliness of a bullet has been nerfed somewhat, however, and it takes two unlucky rounds to finish off this tenacious bloke-at-arms. At least at first. The RPG part soon becomes clear. After a few successive empty clicks of the hammer, you level up. With money earned you can buy health-giving trinkets or protective buckets to put on your head (and the more bullets you play with, the greater the rewards). You also make your way up the skill tree with XP, giving your knight armour plating or the chance to regenerate health with each blank shot. Other skills include the chance of a misfire, or a bonus that doubles your winnings for the next shot.

The shop items also rotate. Bigger guns with more chambers become available, or you might see a Holy Grail that boosts all sorts of stats. A map also charts your progress, challenging you to increase the damage from each bullet, or adding extra chambers one by one. Although when your revolver increases in size, the minimum number of bullets you have to jam into the death wheel goes up. The whole thing is just a finely trimmed tree of numbers and odds, blossoming with bullet flowers. 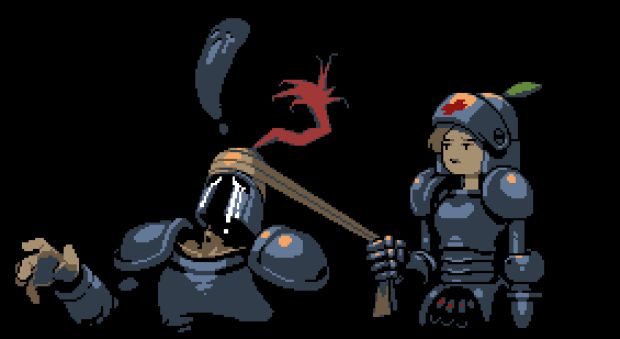 It was created by FourQuarters Team for the 41st incarnation of the Ludum Dare game jam, under the theme “Combine two incompatible genres”. And what once seemed incompatible now seems very compatible. But I guess you can put a skill tree and a gambling mechanic into anything and it will work. The team have attempted to avoid some of the inherent darkness of this particular topic by including a ‘game over’ image of a nurse patching up your head, as if two bullets coursing through your bonce was only as debilitating as a grazed knee. But this doesn’t reduce the gambler’s tension in those important moments, when your next shot could mean a new goodie from the shop or instant death.

You can play it for free here.