Nvidia's RTX 2070 Super is a great graphics card if you're after smooth, 1440p performance, but when you stack up the £475 / $499 Nvidia Founders Edition card I reviewed against AMD's new Radeon RX 5700 XT, it starts to struggle at bit on the old value for money front - just have a look at my big RTX 2070 Super vs RX 5700 XT benchmark showdown to see why. Yes, Nvidia's RTX 2070 Super is the faster card overall, but I'm not convinced that extra speed is worth paying another £100 / $100 for. However, despite being one of the cheapest RTX 2070 Super cards out there right now, the Nvidia Founders Edition is also one of the slowest, as unlike the FE version of the non-Super RTX 2070, Nvidia have decided not overclock this particular card, leaving its max boost clock at its default reference speed of 1770MHz.

Is it therefore worth spending a bit more on a faster, overclocked model from a third party manufacturer instead? And does that extra bit of nippiness help push the RTX 2070 Super closer into best graphics card territory over its AMD rival? To help shed light on this eternal quandary, I've been testing two other RTX 2070 Super cards to see how they compare: Zotac's AMP Extreme edition, and Asus' Dual OC model. To the bar charts!

First, though, some specs. As you can see from the table below, the max boost clock speeds on the Asus Dual OC and Zotac AMP Extreme are quite a bit faster than what you get on the Nvidia FE. They're also quite a bit more expensive as a result, although in the UK the Asus is actually a smidge cheaper than its mildly slower Zotac rival.

There are, however, other considerations you'll need to account for here, which, as you'll be able to see below, mostly comes down to the sheer size of them. The Zotac, for example, is quite a bit longer than Asus and Nvidia's models, making it a poorer fit for smaller PC cases, while the Asus is one of the chunkiest cards I've ever seen and is therefore more likely to obscure a greater number of PCIe slots on your motherboard than anything else.

Otherwise, though, they all use the same type of power connector combo, and their 8GB of GDDR6 memory is all clocked at the same speed as well - unlike the FE version of Nvidia's RTX 2080 Super graphics card, for example.

I've also used the same PC components to test them all with, too - an Intel Core i7-8700K CPU, 16GB of Corsair Vengeance RAM, an Asus Prime Z370-P motherboard and an OCZ ZX850W power supply. To the graphs!

Starting with Ultra settings at 1920x1080, each RTX 2070 Super card's performance is, well, pretty similar. The Asus and Zotac distinguish themselves in a couple of games, offering at least another 5fps more over Nvidia's card in Total War: Three Kingdoms, Final Fantasy XV, and Assassin's Creed Odyssey, but otherwise the Nvidia FE version of the RTX 2070 Super is pretty much neck and neck with them, if not actually a tad faster - see Monster Hunter: World, The Witcher III and Forza Horizon 4. 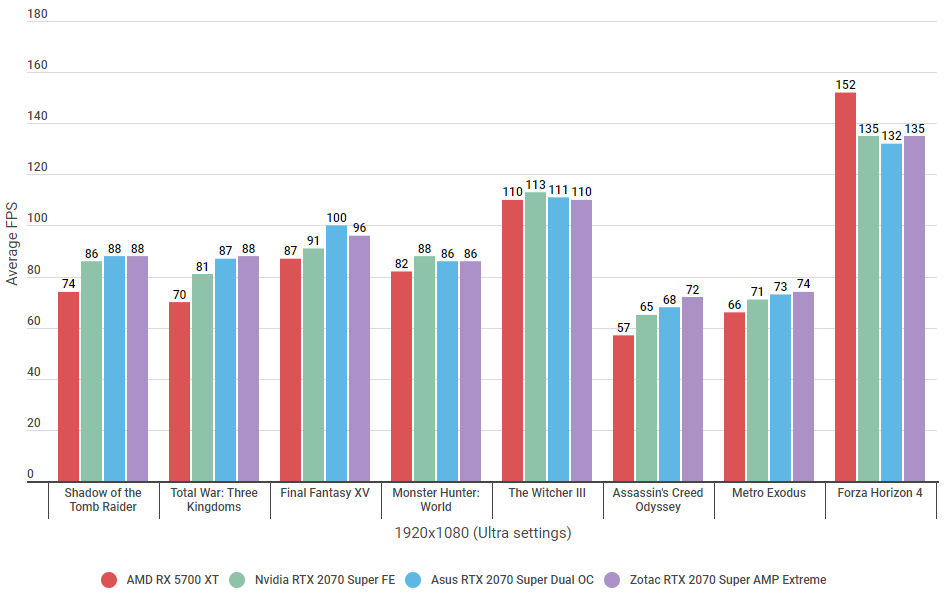 Of course, none of this will mean anything at all unless you've got a high refresh rate monitor at your disposal, but so far, the Asus and Zotac aren't making a particularly great case for themselves. The Asus might be particularly attractive if you spend a lot of time driving around with Noctis and his boy band prince pals in Final Fantasy XV, as this was really the only game where I saw a tangible difference in performance across the board (especially once I started enabling the game's fancy Nvidia effects), but in the grand scheme of things, the Nvidia FE is still arguably the one that's best value for money here out of these three particular RTX 2070 Super cards.

Really, though, the main reason why you'd buy an RTX 2070 Super card is for flawless 60fps gaming on Ultra settings at 2560x1440 - and once again, it's Nvidia's FE version that arguably comes out on top here.

In many cases, for instance, there was no difference between the Asus and Zotac whatsoever. In the games which have internal game benchmarks, such as Total War, Shadow of the Tomb Raider, Assassin's Creed Odyssey and Metro Exodus, they both delivered exactly the same average frame rates, and in the games that don't have internal benchmarks available, such as Final Fantasy XV, Monster Hunter: World and The Witcher III, they also produced exactly the same min-max frame rates when I ran through the same, repeated in-game sequence. 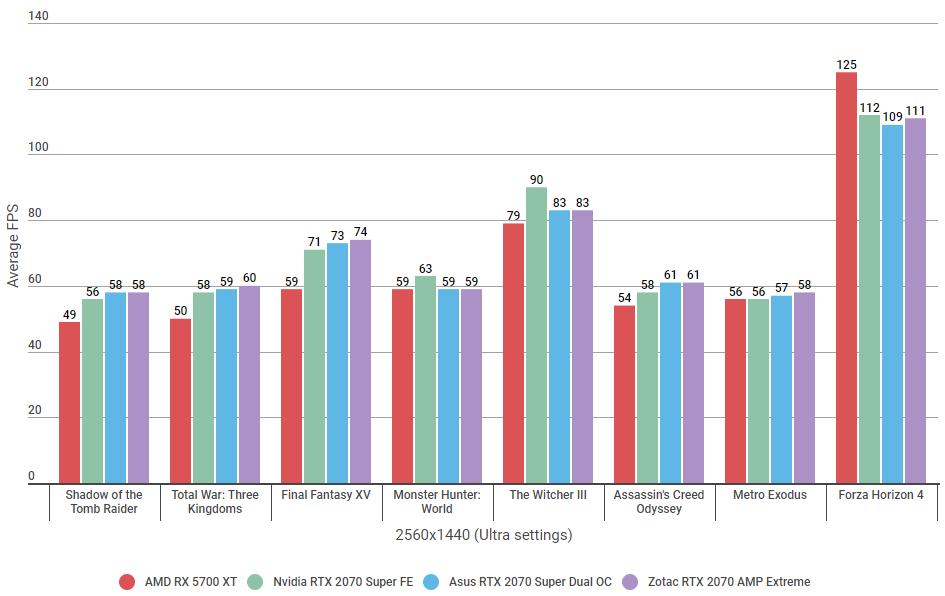 It's rare to see two cards so closely aligned in situations like this - at least compared to other card comparisons I've done in the past, such as my RTX 2080 Super benchmark showdown and my RTX 2080 Ti face-off, and it once again proves that cards with faster boost clock speeds aren't necessarily that much better than their cheaper, slower siblings.

Perhaps the true difference could be found in each card's ray tracing prowess, I thought? Alas, of the few games that actually support ray tracing at the moment - namely, Shadow of the Tomb Raider and Metro Exodus out of this particular set of games - everything was once again almost identical.

In Tomb Raider, for example, with its ray traced shadows set to Ultra at 1440p with SMAATx2 anti-aliasing enabled, the Nvidia card managed an average of 45fps (or 58fps with DLSS switched on), the Asus managed 47fps (and 59fps with DLSS), while the Zotac came in with 45fps again (albeit 61fps with DLSS). In Metro Exodus, the Nvidia and Asus managed 54fps on Medium at 1440p with ray tracing set to High, while the Zotac came in with 55fps. So much for that theory, then.

As a result, this once again solidifies the RX 5700 XT's position as the better value card overall here, for while its Shadow of the Tomb Raider and Total War results are perhaps a bit on the low side compared to its RTX competition, at least the former can be rectified by dropping the game's anti-aliasing option down to SMAATx2, which gives it a lovely high average of 71fps. The RTX cards, meanwhile, come in between 78-80fps on this setting. Otherwise, you're still hitting near 60fps with this card on top settings, along with pretty much identical speeds in a handful of other games. 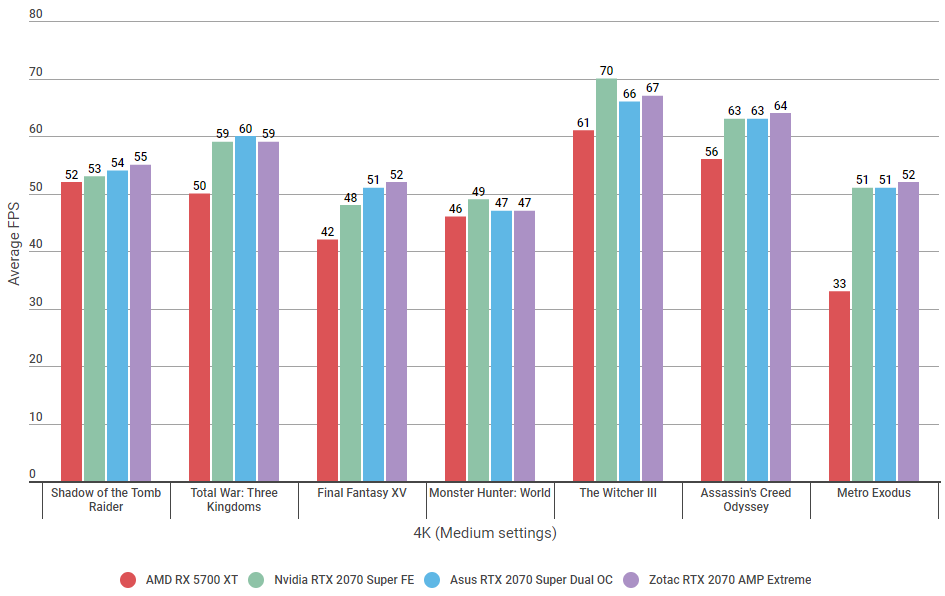 The only instance where the RX 5700 XT really comes undone is when we move up to 4K, where the RTX 2070 Super definitely has the upper hand - although once again, it's a pretty close race between Nvidia's FE card and its Asus and Zotac rivals. On Medium settings, the Zotac card is probably the fastest overall, but it's often only by an average of a single frame, and even then there are still plenty of occasions where the Nvidia card is ahead, such as in Monster Hunter: World and The Witcher III.

In the end, it looks like the Nvidia Founders Edition really is the best of the bunch when it comes to buying an RTX 2070 Super card, which I realise isn't much consolation when it seems to be sold out practically everywhere. Helpful! However, if you are eyeing up one of these cards for your next upgrade, I would definitely recommend trying to track one down if you possibly can. While some games will benefit from cards with mildly faster boost clock speeds, I'm not convinced it's worth spending another £60-odd on the Asus, and definitely not another £100-odd on the Zotac - at least for those buying in the UK.

In the US, the prices are a little easier to stomach, but why spend another $30 on the $530 Asus when a) the Nvidia FE version is in fact available over at Best Buy at the moment, and b) it's going to obscure a bunch of other slots on your motherboard?

I mean, you should probably still just buy an RX 5700 XT if I'm being honest, but if you're adamant about getting a card with ray tracing support and have got the extra cash to spare, then the Nvidia RTX 2070 Super FE is definitely the one to go for.