Over the last seven days, you might have noticed there have been a lot of new graphics cards shaking up our best graphics card list. First we had Nvidia's pair of RTX Super cards, the RTX 2060 Super and the RTX 2070 Super, and just a couple of days ago they were joined by two new Big Navi GPUs, the AMD's RX 5700 and RX 5700 XT. Yesterday, I put all but one of those cards head to head via the medium of some lovely graphs (see our Nvidia RTX 2060 vs AMD RX 5700 article for more info), so today I thought I'd do the same for the $499 RTX 2070 Super, its identically-priced non-Super RTX 2070 counterpart and AMD's top Navi contender, the $399 RX 5700 XT, to see how they all stack up as top-tier 1440p cards and entry-level 4K jobbers. Which one will triumph? Only the bar charts can decide.

As per usual, to see how all three cards stack up across 1920x1080, 2560x1440 and 4K resolutions, I've run all of them through my general games benchmarking suite. That includes Metro Exodus, Total War: Three Kingdoms, Final Fantasy XV (without Nvidia's fancy HairWorks, TurfEffects, VXAO and ShadowLibs effects turned on), Assassin’s Creed Odyssey, Forza Horizon 4, Monster Hunter: World, Shadow of the Tomb Raider and The Witcher III.

Paired with my Intel Core i5-8600K CPU and 16GB of Corsair Vengeance 2133MHz RAM, I've seen what each card can do on max settings at 1080p and 1440p, plus Medium settings at 4K, and taken an average frame rate (either from their own built-in benchmarks or from my own repeated manual gameplay tests) to see how they stack up against each other.

The cards in question are Zotac's GeForce RTX 2070 AMP Extreme edition, the Nvidia RTX 2070 Super Founders Edition and AMD's Radeon RX 5700 XT. The latter two GPUs should be fairly representative of their respective card categories, but I will point out that Zotac's RTX 2070 is probably one of the faster RTX 2070 cards you can buy today. As a result, this card's results should probably be taken as a best case kind of scenario as opposed to something a bit broader. It's probably also why, in a lot of cases, it's not that far behind Nvidia's RTX 2070 Super.

Surprise, surprise, all three cards can do at least 60fps+ at 1920x1080 without issue here. Sure, the RX 5700 XT might just miss the mark in Assassin's Creed Odyssey at this resolution (this game in particular seems to have been a rather large hurdle for this card in general), but generally, they're all pretty capable. Indeed, while the cheaper RX 5700 XT has a clear disadvantage in Shadow of the Tomb Raider and Total War: Three Kingdoms, it's actually pretty much on par with its more expensive RTX rivals in practically everything else here - and miles out in front in Forza Horizon 4, too. 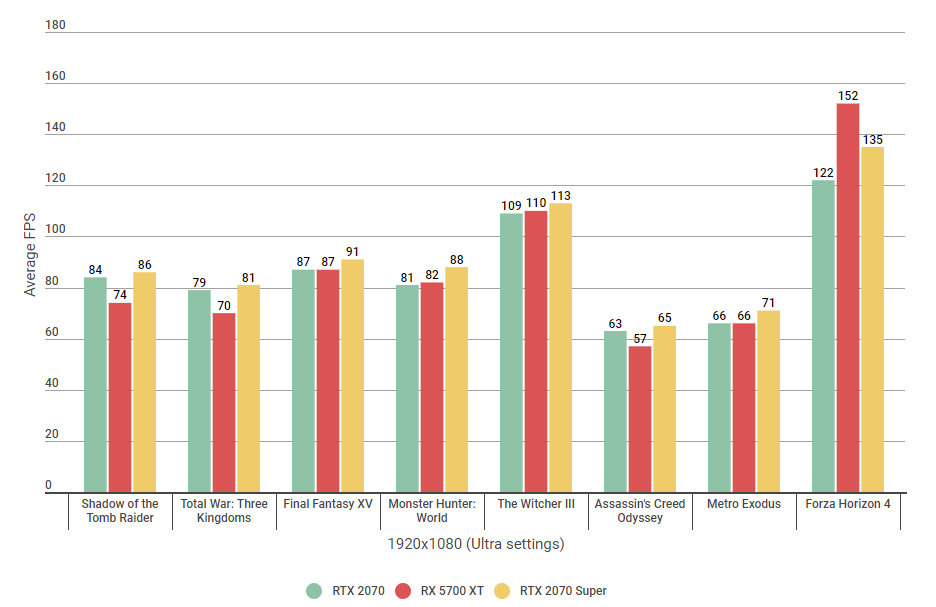 That's pretty good going for a graphics card that's $100 cheaper than the competition, although I should also note that you won't see any benefit beyond 60fps whatsoever here unless you have a high refresh rate monitor. If you've only got a regular 60Hz monitor, there are far more appropriate graphics cards available that will give you exactly the same effect for a heck of a lot less money, such as the Nvidia GeForce GTX 1660 Ti. Still, for the sake of science, this is how these particular cards stack up at 1080p.

Moving on to 2560x1440, then, all three cards can pretty much do 60fps (or pretty darn close to it) at this resolution without having to compromise on graphical fidelity. Again, the RX 5700 XT suffers slightly in Shadow of the Tomb Raider and Total War here, but otherwise it's pretty much neck and neck with the RTX 2070, offering equal performance in The Witcher III and Assassin's Creed Odyssey and ever so slightly nippier speeds in Monster Hunter: World and Metro Exodus. 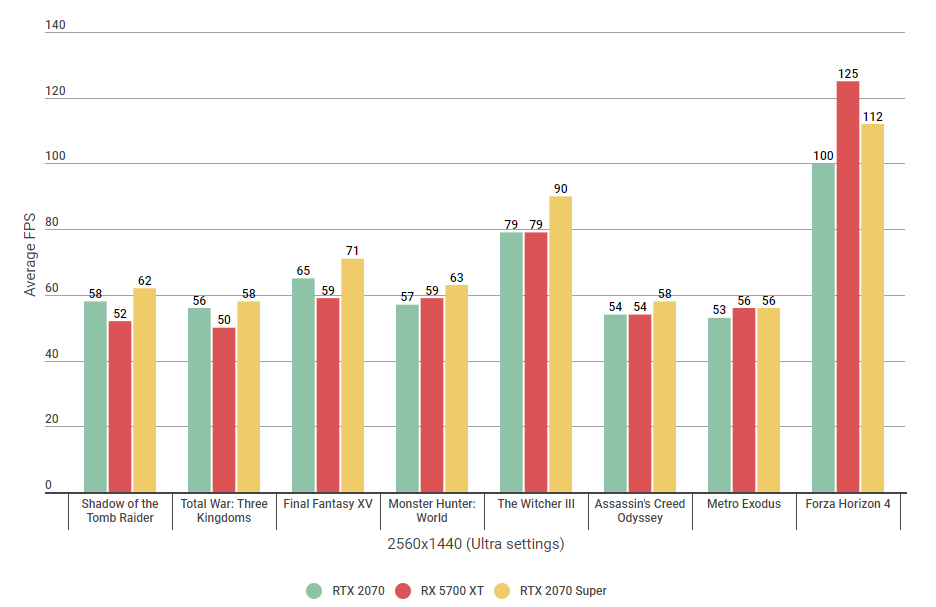 Again, that's pretty darn impressive considering its lower price, and even more so when my RTX 2070 results come from Zotac's absolute beast of an overclocked GPU. Indeed, if I was looking for a top tier 1440p graphics card and I wasn't really that fussed about Nvidia's ray tracing support, then the RX 5700 XT is an absolute no brainer here - at least compared to its more expensive competition (my Nvidia RTX 2060 vs AMD RX 5700 vs RTX 2060 Super vs RX 5700 XT piece mentioned above might persuade you otherwise, of course.

Still, in addition to top notch 1440p performance, the other main reason why you might be thinking about buying one of these cards is so you can dip your toes into that sharpest of high definition pools, 4K. With the exception of Forza Horizon 4 (which isn't included here because, let's face it, you're still getting way beyond 60fps on Ultra settings across all three cards here and would basically require an entire bar chart all to itself), you're really only looking at getting playable speeds on Medium quality settings here, and even then you're still running the risk of entering the town of Chops-ville in some of today's more demanding games. 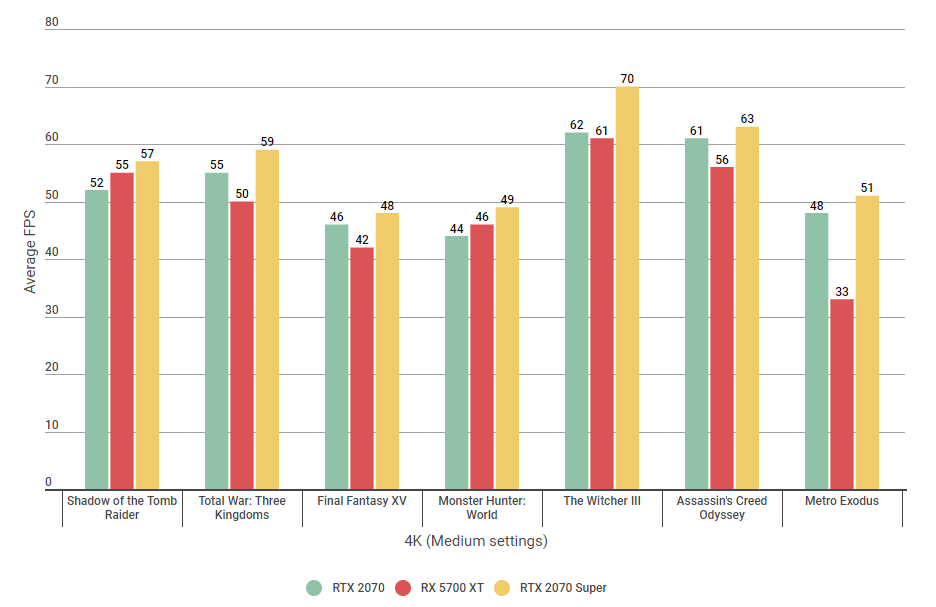 However, as a first foray into the world of 4K, the RX 5700 XT once again holds its own against its more expensive competition pretty well here. Sure, it falls off a cliff when it comes to Metro Exodus for some reason, and struggles a bit with Final Fantasy XV, too, but otherwise you're once again looking at pretty comparable performance with the RTX 2070 at this resolution, and in some cases it's even clutching the RTX 2070 Super's coat tails as well.

To be honest, though, I think it's probably worth spending the extra money on the RTX 2070 Super if you're targeting this resolution, as it's not only able to hit a more consistent 60fps compared to the other two cards here, but it's also more likely to continue hitting that sort of speed further down the line once games start to get even more demanding in the future (although, in truth, I think you should probably be considering either the Radeon 7, RTX 2080 or upcoming RTX 2080 Super if you really want a proper 4K card that doesn't completely cripple your wallet like the RTX 2080 Ti will, as it probably won't be too long before the RTX 2070 Super's competent Medium speeds become competent Low speeds).

Ultimately, though, I think it's another clear win for AMD here, as the RX 5700 XT somehow manages to sandwich itself between each of Nvidia's more expensive GPUs while also coming in at $100 less - which in my books is pretty darn great value for money.

Of course, as I pointed out in my RTX 2060 / RX 5000 face-off, it is worth noting that the RX 5700 XT doesn't have any ray tracing support like its Nvidia rivals, so if you're absolutely desperate for the bestest looking shadows and reflections you can possibly get right now, then you're going to have to stump up the extra cash for one of Nvidia's cards. Personally, that's not a huge deal breaker for me, as I've yet to see a ray tracing game that's 100% sold me on the idea of getting an RTX card - plus, even though the list of confirmed ray tracing and DLSS games is continuing to grow at a pretty steady pace these days, there are still precious few of them that actually have it implemented.

However, I do appreciate that the RTX 2070 is a much more viable ray tracing proposition than its cheaper RTX 2060 sibling, so I totally get why some might prefer to go with the RTX 2070 in spite of the numbers. I'll be doing a further investigation into each RTX card's ray tracing prowess very soon to see what you really need to do ray tracing properly, but for now, I'd definitely be tempted to go down the AMD path once third party versions of the RX 5700 XT are available with better cooling than AMD's blower fan model.