How do war game makers pick which war to fight in their next game? It's a little-known fact that the games industry unites every year to settle this by drawing balls. It's important that games don't all pick the same war, after all, and draws were deemed the best method after several disastrous years of paintball tournaments. Call of Duty got the much-coveted World War 2 ball last year, and rumours are now saying that DICE are the lucky ones in 2018. Battlefield V will take the series back to World War 2 this year, rumours say. They're only rumour, mind.

GamesBeat say that "sources familiar with EA’s plans", who wish to remain anonymous, have confirmed it to them. They've heard that it will launch later this year. The sources further say that EA had used a working title of Battlefield 2, which would be even more egregious than Battlefield 1 considering there already was a Battlefield 2 in 2005 (though there was also a Star Wars: Battlefront II in 2005 and that didn't stop EA from releasing a Star Wars Battlefront II in 2017).

Believe as much or as little of all that as you please. 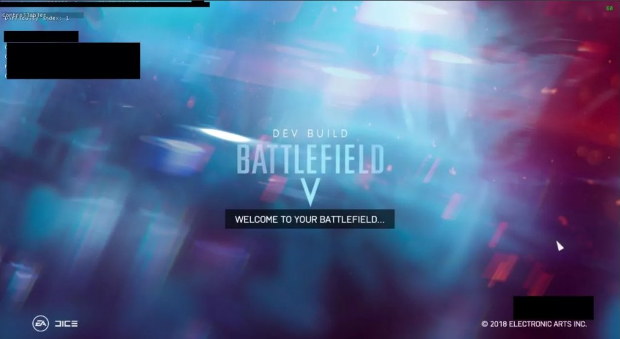 The Internet--including myself, right now--is also passing around that ↑ supposed Battlefield V dev build splash screen, though it's not clear where it came from. It would not be a difficult image for a hoaxer to mock up. Let's say it proves nothing, especially as it only shows a colourful smear rather than e.g. Winston Churchill flicking the Vs or anything and oh my god if they do that with Battlefield V I will be livid.

As a poster on the unofficial Battlefield Forum pointed out, DICE have considered the name Battlefield V before. Battlefield YouTuber Westie said in 2017 that, at a press event, he saw an early Battlefield 1 pitch video which referred to the game as Battlefield V. They're evidently saving the name for something special.

EA have spoken before about DICE releasing a new Battlefield this year, though they didn't say in which war it is set. They didn't say much of anything. But they are quite clear that it's not a Battle Royale game.

Obviously DICE will return Battlefield to its roots in World War 2 at some point because that's how biannual video game franchises work. The only question is: this year or later? EA will surely reveal this year's game by E3 in June at the latest.

We now go over to Rod Stewart for the draw: