It’s impossible not to be struck by the sheer aesthetic splendour of Fountainhead Palace. The combination of the vivid red of its temple architecture, the turquoise of its lake, and the pale pink of its swirling cherry blossoms. It’s perhaps the most memorable location in Sekiro: Shadows Die Twice for this reason alone, but if we dive below the surface, we find more subtle arguments for why Fountainhead Palace is not just a visual marvel, but also a masterstroke of level and world design.

Fountainhead Palace is a place of contrasts and contradictions, and much of its appeal and genius can be found within these tensions. The most obvious example is the decision to place Sekiro’s most grotesque creatures against the backdrop of its most gorgeous landscape and architecture. The ‘citizens of the palace’ and the Palace Nobles in particular are some of the game’s strangest enemies, and their power to disconcert contrasts with the more traditional creepiness of earlier (undead) enemies such as the Headless or the Undead Monks. The creepiness of the Palace Nobles is more refined, civilised, even ethereal. In keeping with the opulence of their home, they appear like musically inclined aesthetes despite their grotesque form. 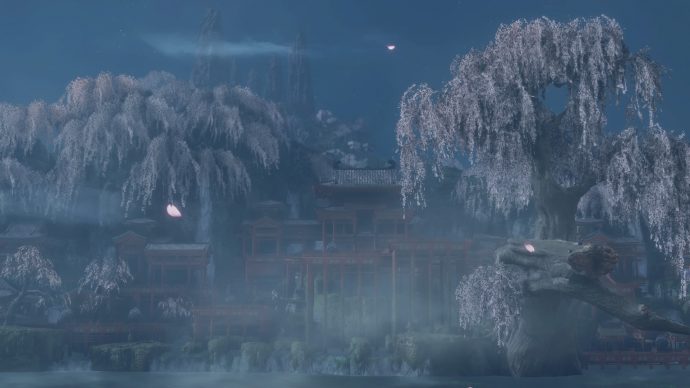 It’s not just their appearance that might throw you off, either. The creatures of the palace move and fight in ways we aren’t used to. The Okami warriors leap about like acrobats, and routinely strike you with lightning like angry gods. The Palace Nobles, concealing their crippling power behind a façade of physical frailty and sluggish movement, are even more subversive of your expectations, draining you of your life force in seconds and depriving you of your ability to reincarnate, an ability you’ve learned to take for granted after dozens of hours of play. Your ‘fight’ against the Mist Noble in Hidden Forest might have prepared you for the Palace Nobles’ appearance, but since he lacks the power to drain your life force, he also presents a cheeky misdirection that might cost you dearly in your first, probably overconfident encounter with the Palace Nobles.

The palace may be a place removed and distinct from the rest of the game world, a lofty and otherworldly realm without precedent accessible only through magical means, but Sekiro takes great care to build continuity over the course of many hours. Besides the Mist Noble, there’s the illusory version of the Corrupted Monk in Mibu Village, whom we face in earnest only upon entering Fountainhead Palace, the High Priest of Mibu Village’s ominous talk about becoming “citizens of the palace,” the Treasure Carps and Pot Noble Harunaga in Hirata Estate. All of these encounters tie into Fountainhead Palace, its inhabitants and the stories that surround it. 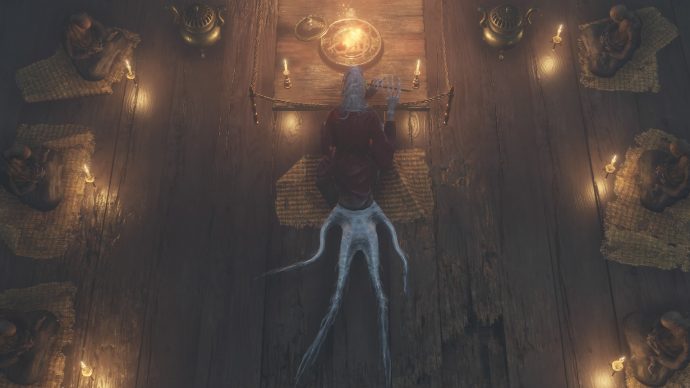 A particularly inspired connection is the Guardian Ape boss fight area in Sunken Valley Passage. Diving into one pool of water, you might notice the remains of buildings that have been carried here by the waterfall all the way from the flooded parts of Fountainhead Palace. If you return here after poisoning the Great Colored Carp, you will find its corpse in the same area, like a goldfish flushed down the toilet.

Apart from obvious story links, Fountainhead Palace carries on and elaborates on many of the game’s themes. Its association with flowing water is related to more abstract ideas of the stagnation that comes with the ‘gift’ of immortality. The citizens’ worship of the Great Colored Carp, and the Pot Nobles’ efforts to take its place through transformation are a grotesque illustration of the lure of immortality and transcending the limits of one’s nature. The significance becomes even clearer if we know that in Chinese and Japanese culture the carp is associated with longevity, hardiness and the overcoming of great obstacles (take, for example, the folktale of a carp whose reward for swimming up a waterfall is being turned into a dragon). 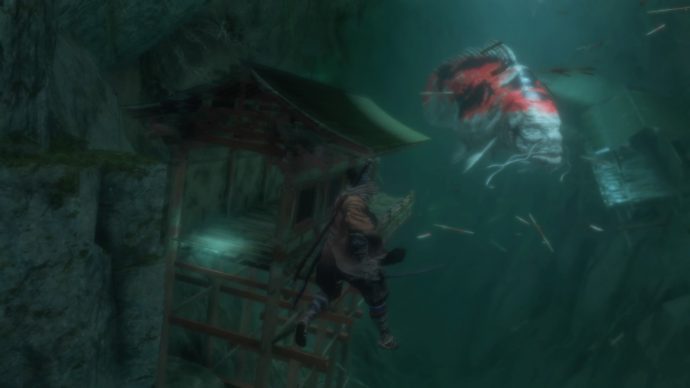 All of these connections and continuities tether the Fountainhead Palace to the rest of the game world, but it is still a world apart. Sekiro may subtly anticipate many aspects of the Palace so that once you arrive there you can’t shake the feeling that everything has been leading up to this moment, yet all of these continuities do little to prepare you. In some instances, they even actively mislead you or set you up for surprises both pleasant and nasty. The first fight against the Corrupted Monk is a foreshadowing only in hindsight; seeing an enemy you thought you’d already defeated return with far greater deadliness and more health orbs isn’t exactly a reassuring sight.

The geography and architecture itself are a far cry from what we’ve become used to up to this point. The restrictive landscape of buildings precariously crouching atop jagged, vertiginous mountain ranges is replaced with one that is far more level and open, at least at first glance. Instead of narrow bridges across yawning abysses we get the calm expanse of a lake. That appearance, too, proves deceptive, and eventually (once we finally get rid of the pesky Okami Leader Shizu) we realise that the surface of the lake hides an entire sunken world of ruinous buildings and overgrown fish, as well as an ominous gulf that drops into depths we can barely make out from the surface. Our deep dive into the lake is later mirrored in our ascension to the highest point in the entire game, the peak on which awaits the Divine Dragon. 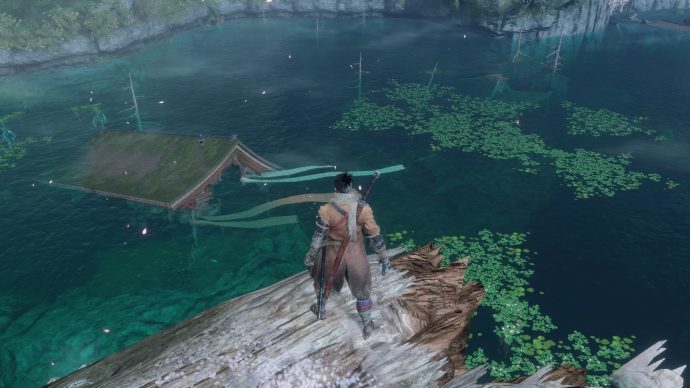 Like Dark Souls’ Anor Londo, Fountainhead Palace is an otherworldly, lofty place we aspire to over the course of many hours. And like Anor Londo, whose sunlight contrasts with the darkness of the rest of the game, the palace is very different from what came before it. Soldiers and samurai are replaced by alien fish creatures, mountains and fortresses are exchanged for a seemingly tranquil spirit realm whose beauty matches its power to unsettle. It subverts our expectations, and plays with tensions and contradictions while still remaining a meaningful and coherent part of the world below it. It’s a place of both deception and wonder, and Sekiro’s best level.