I love me a good wireless gaming headset, but I do hate it when I forget to charge it up and have to sit chained to my desk like a dog on a very short leash because my collection of USB cables are always, always too short. Sennheiser's GSP 370, however, should help rectify that problem thanks to its positively huge battery life of up to 100 hours. Yes, you read that correctly. One hundred hours.

That's four times longer than the current wireless champion, the 24-hour 2019 edition of the Steelseries Arctis 7, and over five times longer than Sennheiser's considerably more expensive GSP 670 and the cheaper Corsair HS70. That's pretty impressive as battery lives go, but it does come at a cost. Currently priced at £169 / $200, can the GSP 370's excellent battery life justify its higher price over the £145 / $150 Arctis 7 and £63 / $99 Corsair HS70? Here's wot I think.

Part of the reason why the GSP 370 lasts until the end of time is because, you guessed it, there aren't any rainbow-infused LEDs demanding to be fed from its precious energy reserves. There's a single light on the left ear cup to let you know when it's in pairing mode and connected to your PC, but it quickly turns itself off again once it's all set up.

To put those 100 hours into perspective, that's around four months use if you tend to play games for around six hours a week. Naturally, you'll churn through the GSP 370's battery faster if you regularly game for longer stints over the course of a weekend, but that's still pretty impressive regardless - particularly when it's so damn comfortable to wear for long periods of time, too.

Indeed, whereas other Sennheiser gaming headsets have tended to give me the dreaded head pinch after a while, the GSP 370 posed no such problem. Its leatherette and suede ear cushions also felt lovely and snug against my cheeks, and the headband offered plenty of adjustment.

The GSP 370's audio quality was equally excellent, too. The voices in Hellblade: Senua's Sacrifice, for example, came through nice and clear while maintaining the game's foreboding atmosphere, and I was still able to hear all the little details alongside them, too, such as the gentle drips of water of Senua's paddle boat and the flickering flames lining the path to Helheim.

At the other end of the scale, Doom was as bombastic as ever, delivering a big, hearty bass line alongside its busy battle music and squelching demon head effects. The Super Shotgun had a wonderful sense of heft to it as well, and I was able to pinpoint exactly where all the stragglers were as well so I could give them another double-barrelled welcome to the after life.

Similarly, Final Fantasy XV's orchestral sections had a pleasing sense of warmth to them, and they didn't get drowned out by the zip-zapping of Noctis' teleporting battle effects, either. Instead, there was plenty of detail present, and everything felt in perfect balance. 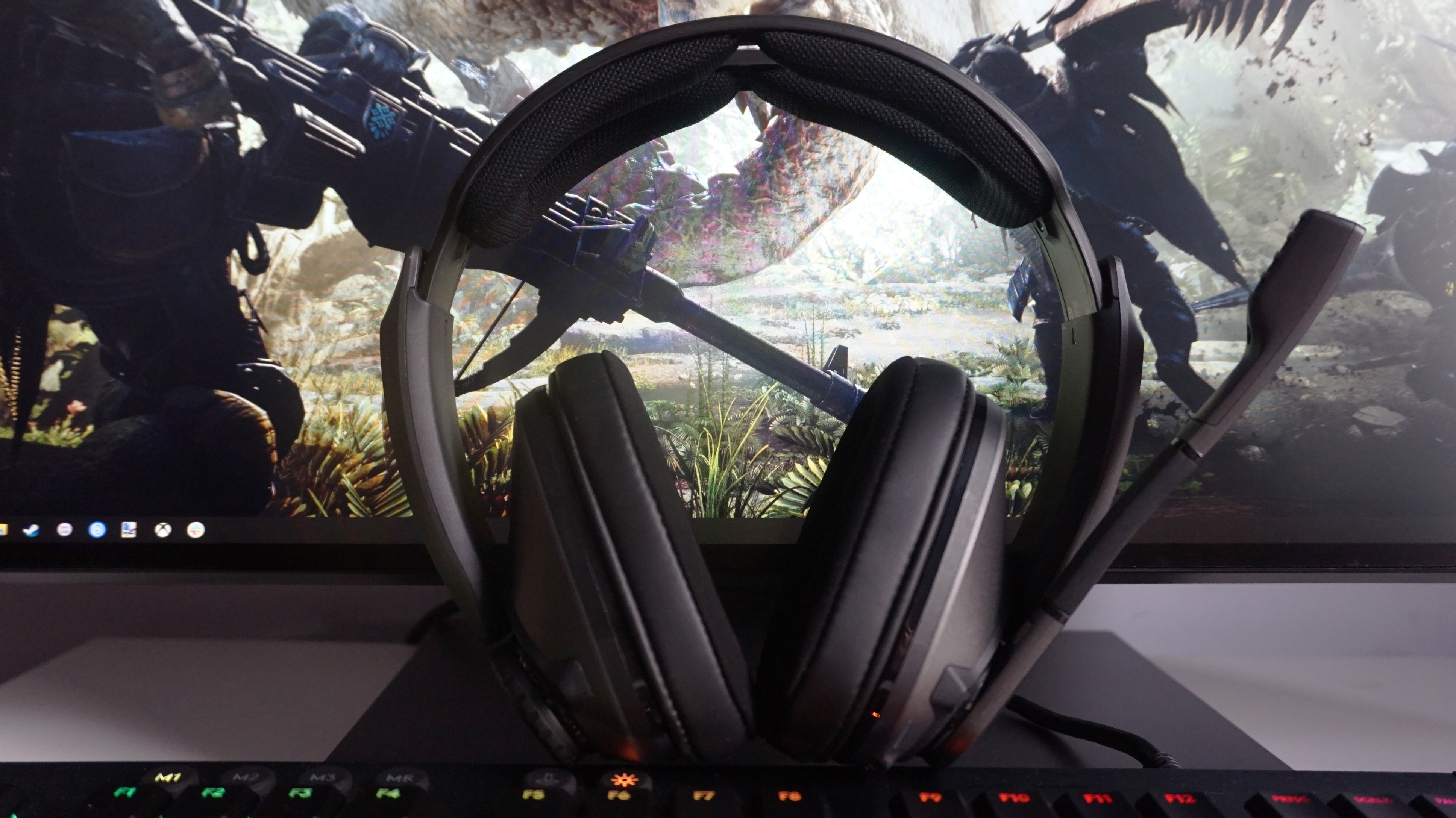 The GSP 370 excelled as a regular music headset, too. When I switched over to listening to my Final Fantasy XV soundtrack in iTunes, for example, it showed exactly the same kind of warmth and detail as I'd heard in-game. Battle themes struck a good balance between their busy, bombastic bass lines and their dramatic piano melodies, and there was plenty of depth and oomph to be found in gentler, orchestral tracks, too.

Similarly, the cello in my Heaven's Vault soundtrack sounded like it was being played right there in the room with me, and everything from the delicate plucked strings of my Tangle Tower soundtrack to the choral coos of Abzu either had me tapping my toes or swaying in my seat in time with the music.

Its bass didn't overwhelm the lovely clear vocals of more traditional rock and pop tracks, either - although those of you who do happen to favour a deeper, bassier tuning should be well catered for by the music preset available in Sennheiser's free Gaming Suite software. It won't suit all types of music, but I found it gave songs and other tracks I listened to in Spotify a bit more of a fuller, well-rounded sound than the default Flat preset, which I used for everything else in my testing. And if its Flat, Music, Movie or Esports presets don't do it for you, you can always create your own.

You'll need to download the Sennheiser Gaming Suite if you want to enable the GSP 370's virtual 7.1 surround sound, but I'd only recommend doing this if you're using it to watch a film that supports it. In games, switching over to 7.1 tended to make everything sound very light and airy (as nearly all virtual surround sound options tend to do on gaming headsets), so you'll probably want to leave it in its default 2.0 mode.

The Gaming Suite also tells you how much battery life the GSP 370 has left, and you'll find a range of different microphone options there, too. Personally, I felt the microphone's default settings were more than adequate when I recorded myself talking in Audacity, so you can probably leave them as is unless you really feel like tinkering with them. For instance, despite the GSP 370's noise cancellation option being turned off, I couldn't detect any kind of background noise or hiss whatsoever. Similarly, I didn't feel the need to switch on its Voice Enhancer setting, either, as my voice was already perfectly clear and free of any breathy wind pop effects without it. 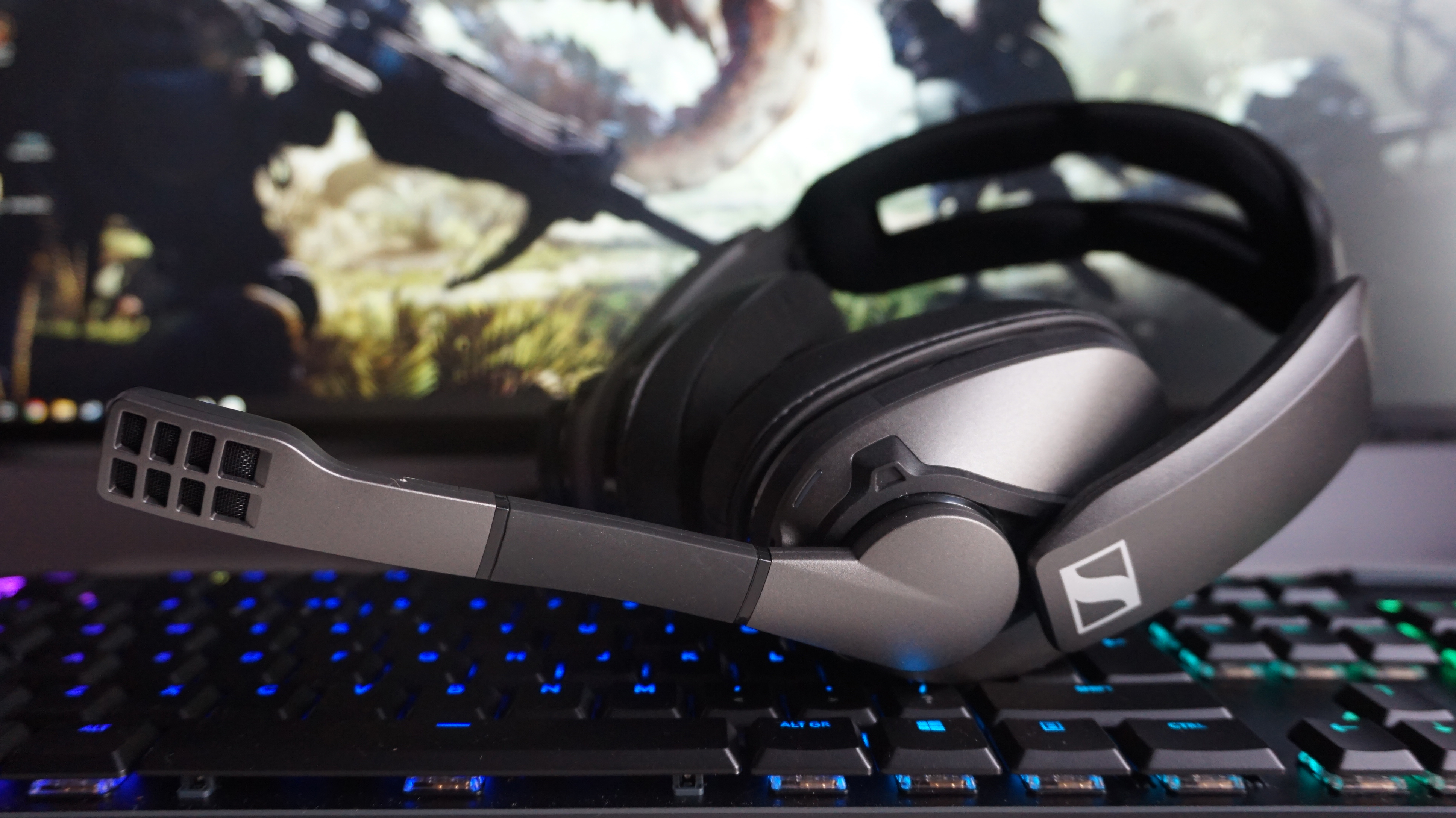 The only mildly disappointing thing about it was that the sidetone setting was greyed out, which meant I wasn't able to hear myself speak clearly when talking into the mic. I would have expected to see this kind of feature on a £169 / $200 headset, but alas it wasn't to be. Still, in the face of the other great things about this headset, it's a fairly minor bugbear overall.

Indeed, the Sennheiser GSP 370 is an outstanding wireless gaming headset overall, and almost certainly worth the extra cash over the £145 / $150 Steelseries Arctis 7. For me, the Arctis 7 still does a few extra things that makes it hang on to its best wireless headset crown - namely it's sidetone and chatmix feature, which lets you filter out chat or game audio depending on your preference, and it also comes with a wired 3.5mm cable so you can use it with other devices. Plus, its design is a lot less bulky, its microphone is retractable, and is even more comfortable to wear for long gaming sessions.

Still, if you're not so fussed about those things, though, then the Sennheiser GSP 370 more than justifies its high price. With its excellent audio quality and that stonkingly large battery life, the GSP 370 is a fantastic wireless gaming headset that should be at the top of your consideration list.