PCs are a messy business. Most of us have wires up the wazoo, and probably not an insignificant number of knots and snarled cables to go with them. Problem is, not many of us are willing to forgo the speed and reassurance that comes from having a wired set of peripherals - except, that is, when it comes to our headsets. Life is so much better when you're not getting throttled as you desperately try and untangle yourself from your wider pool of leads and flexes when you need to answer the doorbell or go downstairs for dinner, but good grief wireless headsets do cost a lot of money, don't they?

Fortunately, Corsair have taken note, as their brand-new HS70 Wireless headset has finally arrived for just £100/$109. That's a heck of a lot more appealing than the £140/$160 demanded by HyperX's Cloud Flight and even the £130/$150 you'll need to spend on the excellent Steelseries Arctis 7. Corsair hasn't skimped on features, either, as you're still getting virtual 7.1 surround sound and up to 16 hours of uninterrupted play time. Can it break into our headset rankings? Let's find out.

Like most wireless gaming headsets, the HS70 Wireless delivers its audio over 2.4GHz. That might make some of you groan with despair, but Corsair have at least gone some way to help pre-empt any potential issues with their newly designed dual antennas.

Found inside both the headset and the USB transmitter, each antenna can hop between frequencies to help ensure you get the best wireless signal possible at a range of up to 40ft. I'll admit things started to get a bit patchy when I took a trip to the bathroom just down the hall, but given the number of other wireless devices I've got at home all competing over the same frequency, I certainly didn't have any issues with it when I was sat at my desk. 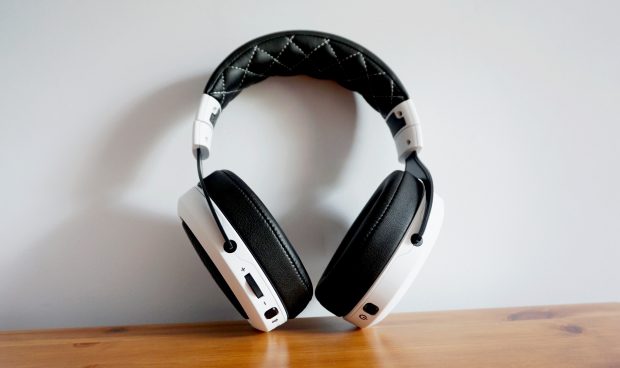 Another point in the HS70's favour is its gorgeous design. Weighing just 330g, its sturdy, yet soft-touch headband immediately feels more upmarket than both the Cloud Flight and Arctis 7, and its metal grills, accented stitching and soft, memory-foam ear cups give it a smart, elegant look that belies its $90 price.

What's more, it's damn comfortable. I don't normally get on with traditional headbands like this, as I find they tend to press down on my head after about 30 minutes and give me a terrible headache. The HS70, however, feels like a snug duvet I could lounge in for hours - a firm, padded ring of duvet, you understand, but a decidedly non-head-pinching ring of duvet all the same.

My only minor quibble is that, much like Corsair's Void Pro RGB headset, the HS70 has a slightly looser fit than most other gaming headsets. This probably won't be a problem at all if you've got a normal-size head, but those with titchier noggins like myself may sometimes find that its large earcups press a little too firmly against your jaw. It didn't annoy me per se, but I was certainly more aware of it being there than other headsets I've used in the past. 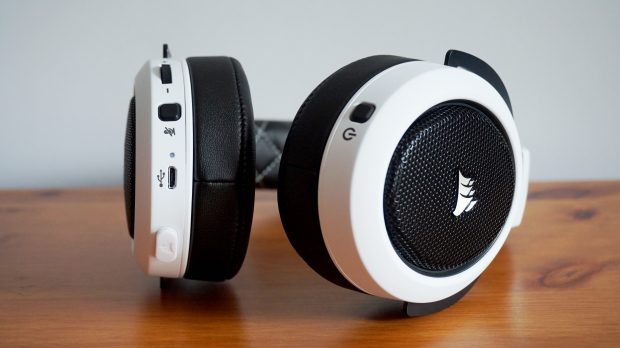 Still, the quality of one's tinkling music is the true measure of whether a gaming headset is any good or not, and the HS70 Wireless doesn't disappoint. Doom's booming bass sounded nice and chunky on Corsair's new headset, but the throaty screeches of its imps and possessed soldiers still rattled through with perfect clarity as I put them out of their misery. It kept pace with each frantic camera jolt as well, helping me pinpoint the location of every last shotgun target in big battle scenes.

Gun blasts could have had a bit more oomph, truth be told, but I liked the sense of balance it provided between the highs and lows. It was meaty and bombastic enough to let me fully descend into Doom's gory hellscape, but not at the expense of the game's finer environmental details.

The HS70 works brilliantly in quieter scenarios as well, accurately capturing each wayward whisper of Senua's psychotic Furies in Hellblade with pinpoint precision. Whether they were creeping up on the back of my neck or tittering away in the background, it felt like the voices were right there inside my own brain.

Really, it's just a great all-round headset, helping to pile on the pressure with Frostpunk's urgent strings and ominous horns as you grit your teeth through its big end-game freeze while also letting you kick back to the peaceful sound of chocobo warks as you drink in the sights of Final Fantasy XV's Eos. 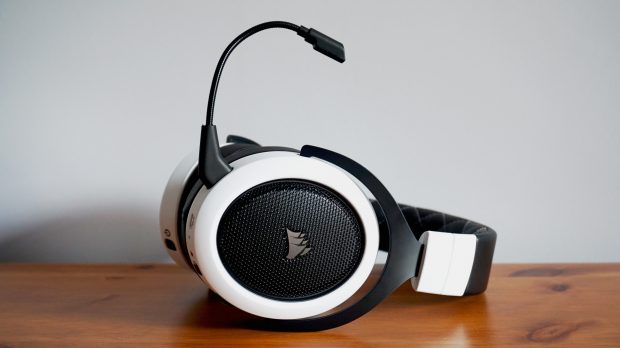 I was slightly less enamoured with its 7.1 virtual surround sound, though. It was fine in some games - Final Fantasy XV sounded much the same as it did in stereo, for instance - but in others, such as Doom, it made all the important sounds - plasma fire, Super Shotgun blasts etc - sound empty and hollow. The wider soundscape had a wonderful sense of presence, but it dulled the impact of the game's moment-to-moment action.

It's also a bit of a faff to turn on and off, as you don't actually get a physical control for it on the headset itself. All you get is a volume slider, a microphone mute button and a power button. Instead, you have to download Corsair's Utility Engine (or Cue) software and turn it on there. You can also use Cue to change the HS70 Wireless' EQ presets (or create your own), as well as adjust the microphone's volume and sidetone settings, but I found the less tampering I did, the better the headset sounded.

Speaking of the HS70's microphone, this slots into the left ear cup and can be swapped out for a more discrete rubber seal whenever you like, decreasing the likelihood of feeling like a fool when you get them out on the train for a spot of work music. Its bendy metal arm can be twisted to whatever angle you like, too, making it easy to erase any unwanted pop effects when you're chatting with your mates.

Indeed, I ended up having to move the mic further away to a distance of around 5cm when I recorded myself talking in Audacity, as positioning it any closer tended to result in several blow-outs on my 'b's and 'p's. My voice also sounded a little tinny for my liking, but it's still a perfectly serviceable microphone that should get you through most multiplayer sessions without much fiddling. 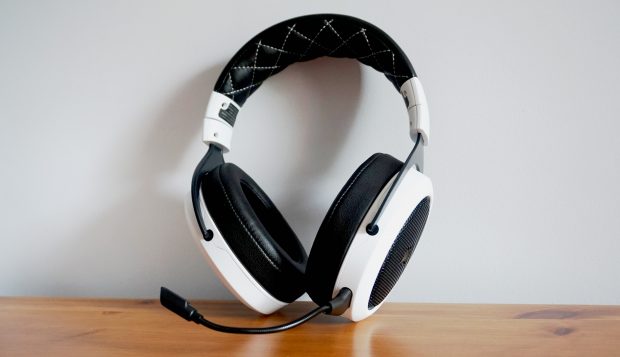 The HS70 is a good companion for pumping bits of ordinary music into your ear holes as well. There was a slight heaviness to some of the busier battle themes on my Final Fantasy XV soundtrack, but overall the bass was kept in check against the warm and clear mids and highs.

It also acquitted itself well when I switched over to the bass-heavy opening theme of space mech anime Knights of Sidonia. Vocals came through loud and strong against the thumping backing music and at no point did any part of the song feel like it was being overwhelmed by another. The same goes for more traditional pop and rock tracks, too.

Lighter orchestral tracks came across nice and tight as well, with the percussion in the Ace Attorney concert rendition of Furio Tigre ~ Swinging Zentoria sounding particularly taut and crisp against its staccato strings.

Overall, I'm impressed with the Corsair HS70 Wireless. It's comfy, looks good and produces a great quality sound, all while being significantly cheaper than its main competition. I'd still be tempted to shell out a bit more for the Steelseries Arctis 7's fancy chat mix slider that can filter out background music or multiplayer voice chat whenever you like (not to mention its even comfier ski-goggle headband design), but for those after something a bit simpler, the HS70 Wireless should be a serious contender for your next headset.