As we get closer to Cyberpunk 2077 launch day (which I imagine will be like when Elon Musk punts one of his cars into space just because), my life has become increasingly blurred. By day I am immersed in video game stuff, looking back through the Night City Wires and prepping as much as possible for a huge action RPG that will consume at least 100 hours of my waking life. By night I am drinking tea and watching police procedurals. At the weekend: both, simultaneously.

It's got me thinking about the way detectoring is going to be a thing in Cyberpunk, 'cos I reckon it'll either be really good or really annoying.

Despite an emphasis on lawlessness and people taking justice into their own hands as gangs run riot and so on, the police do exist in Night City and classify things as actual crime. We've seen their special digi-crime scene tape and everything in CD Projekt Red's Night City Wire streams, there was a crime scene being investigated in the very earliest gameplay video two years ago, and there was a blink-and-you'll-miss-it shot in the video about gangs that came out last month. (Side question: do cyberteens still get straps for their first guitar that say CRIME SCENE DO NOT CROSS? Are they digi-straps?).

When we chatted about that first video, former Vid Bud Matthew (RPS in peace) said he'd quite like to be a cybercop. I wouldn't because I'm not a narc or a loser, but I would like to be a cyber-detective. You know, a private dick but my trenchcoat is two-tone and holographic. Kind of like Phillip Marlowe, but with a hatband made of shimmering pixels and prompts lines like, "From the moment she walked in, I knew that dame was trouble. She had the kind of legs that turn into big robot swords." 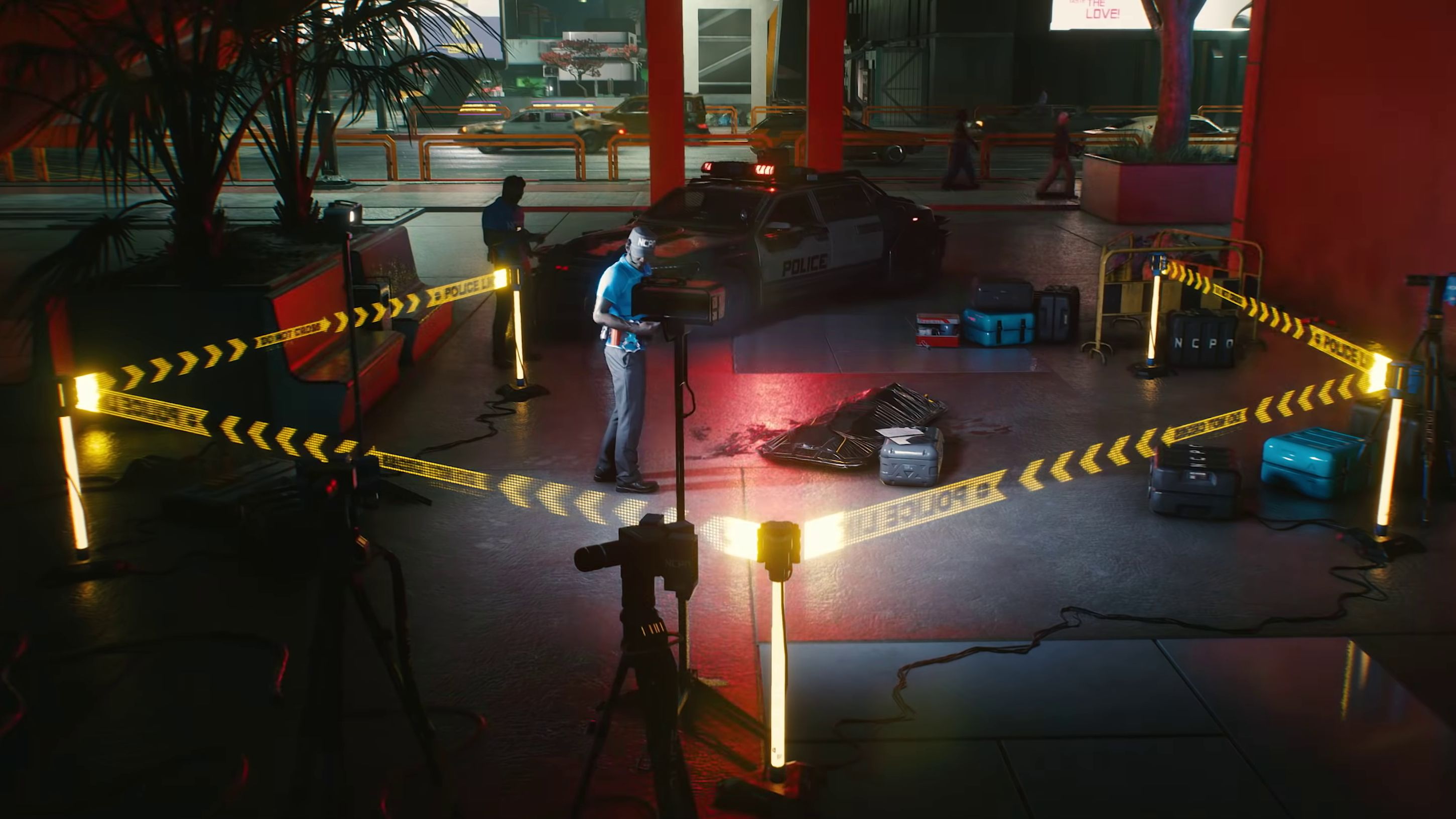 I love the idea of combining higher tech stuff with good ol' fashioned deduction and pounding the streets. When doing a detect, the key (which almost all games leave off their big chain) is to allow me the capacity to hunt down clues, follow hunches, and still end up coming to the wrong conclusion because I missed something. Think of Frogwares' most recent Sherlock Holmes games like The Devil's Daughter, where you can collar the wrong criminal, or get the right one but decide to let him go. Or Paradise Killer, where it's possible to know exactly whodunnit and why, but not meet the evidence threshold for conviction in your weird magic demon court!

The Witcher III wasn't perfect in this regard, but if Cyberpunk does a similar thing - where I can be following one quest, the thread goes cold, and then suddenly I come across it again while scratching my arse and doing something totally different in another part of the world - then that's a solid foundation.

However, there is also the whole "brain-dancing" thing (also known as BD), which was revealed in the very first Night City Wire. Though it's apparently a very popular form of entertainment, since it lets you piggy back in and experience someone's memories and emotions second-hand (the most hellish way to watch an influencer's tearful apology video imaginable), in the game you'll be using it to replay crimes and gather those all-important clues. Nat explains it better than me in her news post:

After taking a breather, V hops back in to start editing and analysing the recording, breaking out of the goon’s eyes for full free-camera investigation. The disembodied punk can scrobble back and forth through the recording and use environmental cues to unpiece the scene in a manner that’s reminiscent of Tacoma, by way of the detective vision off those Batman: Arkham games.

But this is my problem, you see, because those crime scene investigations in Arkham were really fucking boring. I mean yeah, it was cool the first couple of times you did it, 'cos you could see a man's skeleton and that, but really it was an exercise in ticking the boxes the computer wanted you to tick. When you'd scanned all the necessary orange bits, you got to hear Batman go "It looks like he got shot from over there," or whatever. Even when they got a bit more complicated and you could scrub through someone getting the shit kicked out of them by the Joker, it was still an artful version of Google asking you to select all the squares that have a bicycle in them. (Which, yes, I know, if we are being reductive, that is what everything in any video game ever is, and also books are just letters in order). 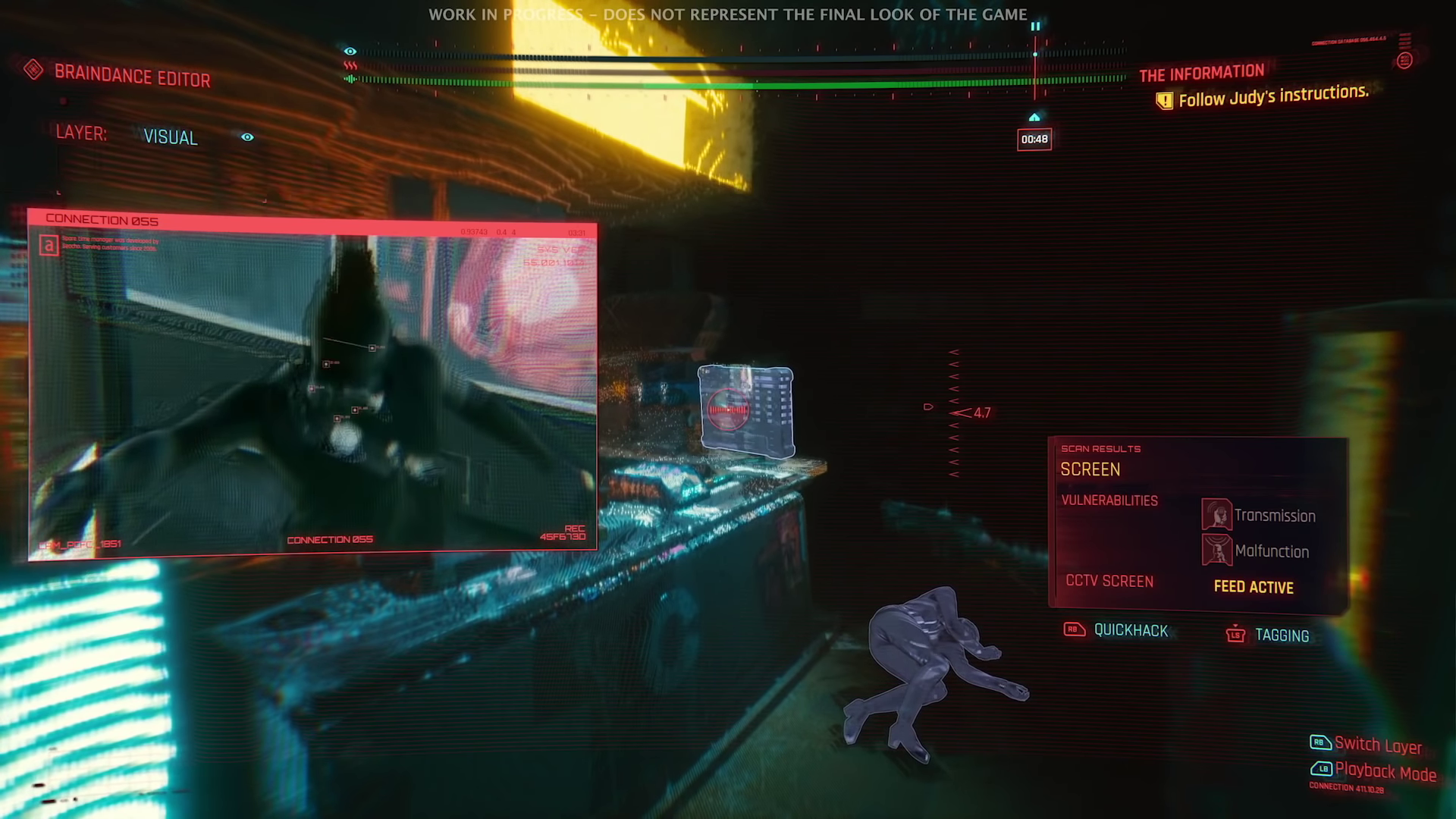 I really like detective mysteries, not because I want to be a cop (see prior statement), but because I like figuring out puzzles - and fundamentally that's what mysteries are. The BD tech in the Night City Wire looked cool - you can listen in on conversations and scan bystanders and so on - but it also looked a bit too much like advanced Arkham.

Now, in fairness, the bit of BD we saw was clearly the tutorial-esque introduction to the concept, so presumably it won't always be as easy as a camera being at the right angle to capture yer man being shot in the head. But adding too much of the infallibility of technology makes it too easy, and means I'm not really involved in figuring it out at all. In the current day, it's the mobile phone conundrum. You have to have a reason why the problem couldn't be solved by someone texting someone else. So either one party ran out of battery, or you keep remaking period mysteries by Agatha Christie forever and ever and ever. An all-seeing technological eye is only a few steps behind Minority Report, innit. And we all know how that went.

I want to figure out puzzles in a way that, when I have four pieces and I put them together in a certain way, for example, I can still see what the fifth one would look like even though it's missing. Not because a camera recorded the whole puzzle and I was able to watch it back. That's cheating.