Things have been hotting up in Elite Dangerous’ [official site] facsimile of our massive galaxy, what with that whole alien invasion problem. But if humanity can survive the Thargoids, there’s a whole lot more coming in 2018 with a new season called Elite Dangerous: Beyond. Frontier announced a roadmap at Frontier Expo, and it looks like they’re going to be cramming a lot into these free updates, including new ships, tools and large group content

If you missed the livestream, you can watch the replay below.

Over the year, you’ll see improvements to crafting, trading, co-op -- including the addition of guild-like Squadrons and massive, dockable fleet carriers -- and planet creation. Expect more consequences for being a naughty criminal, too. You’ll be able to get new ships, like The Chieftain and The Krait, which you might recognise if you played the original Elite. And if you've become invested in the narrative, good news: the story of the Guardians will carry on. That means exploring ancient alien ruins, working your way through new narrative threads and embarking on new personal adventures as well.

So you won’t just be uncovering the mysteries of the Guardians with your buddies, exploring the detritus of a forgotten civilisation, you’ll be able to unlock a personal narrative while you’re on these adventures, discovering weird tech. What this tech does remains a mystery that you’ll have to figure out next year. 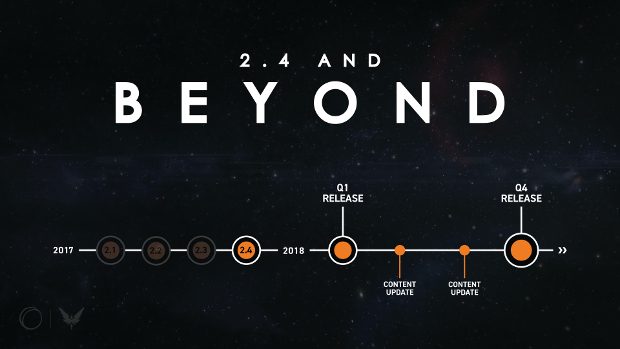 It might not be as immediately exciting as some of the other parts of the update, but the upcoming GalNet improvements have especially piqued my interest. Simply, GalNet news will have audio, so you can listen to news stories while flitting through space instead of taking your eye off the ball so you can read them.

Frontier have also promised that the galaxy will become a richer, more lively place, with new anomalies and phenomenon to hunt for and discover. These discoveries will be added to a Codex, which will serve as an encyclopedia. New mining tools and challenges are being introduced, as well, with Frontier wanting to evoke the feeling of Wild West prospecting.

It sounds like the scope of these updates is just as large as Horizons, but while that season required you to drop some cash, Beyond will be free to everyone who bought Horizons. It will be split up into two major content updates in quarter one and quarter four, with smaller updates between them. But before this all kicks off next year, there’s still update 2.4 to look forward to. It's already started, but updates will continue in the coming weeks. Check out the teaser below.