Please update your nomenclature from Star Trek: 25nd Anniversary to Star Trek: 52th Anniversary. It is indeed a worrisome 27 years since this first Star Trek graphic adventure game came out in 1992. But sure - SURELY - it must be absolutely unplayable rubbish now, right? 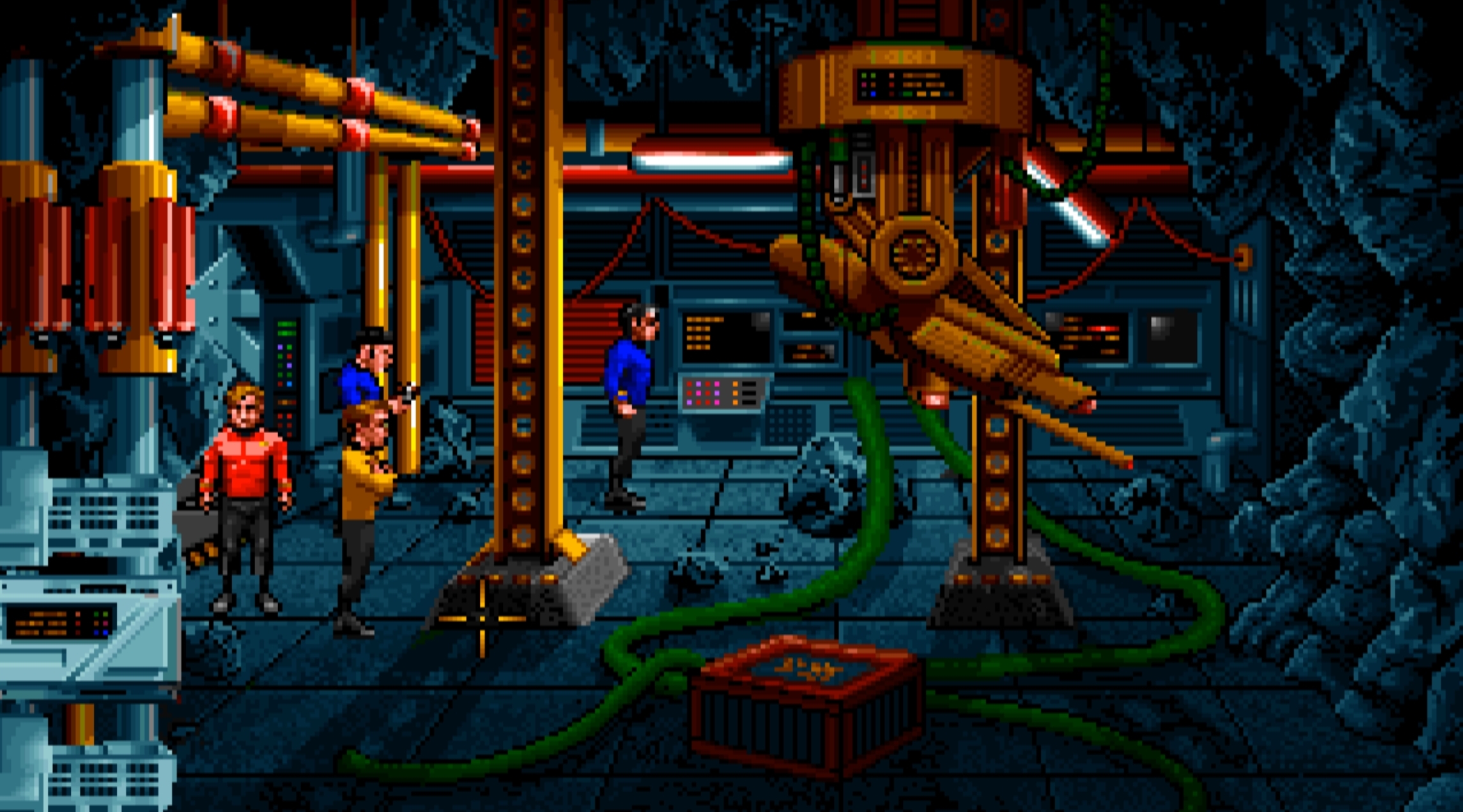 This is, on some level, seven brand new episodes of Star Trek: The Original Series. Seven individual stories, that barely overlap, which tell original yet incredibly TOS-like tales of bridge-based banter and landing party derring-do. But on another, it's a really astonishingly versatile game that allows you to play it in very different ways, with very different outcomes. In a way that makes me gawp, because this is what games keep promising they're going to offer today, but never really do.

I think I was most struck by this while playing the seventh and final mission, and becoming completely stuck because of one of the game's many idiosyncrasies (I hadn't used 'look' on one flashing light across a bridge-wide array of flashing lights - this game has some issues). In desperation I looked at walkthroughs and kept finding descriptions of how to complete the mission absolutely ages before any of the stuff I was doing on an abandoned starship. Apparently everyone else had just teleported away ages back, but here I was completing an intricate series of puzzles those guide writers didn't know where even there. 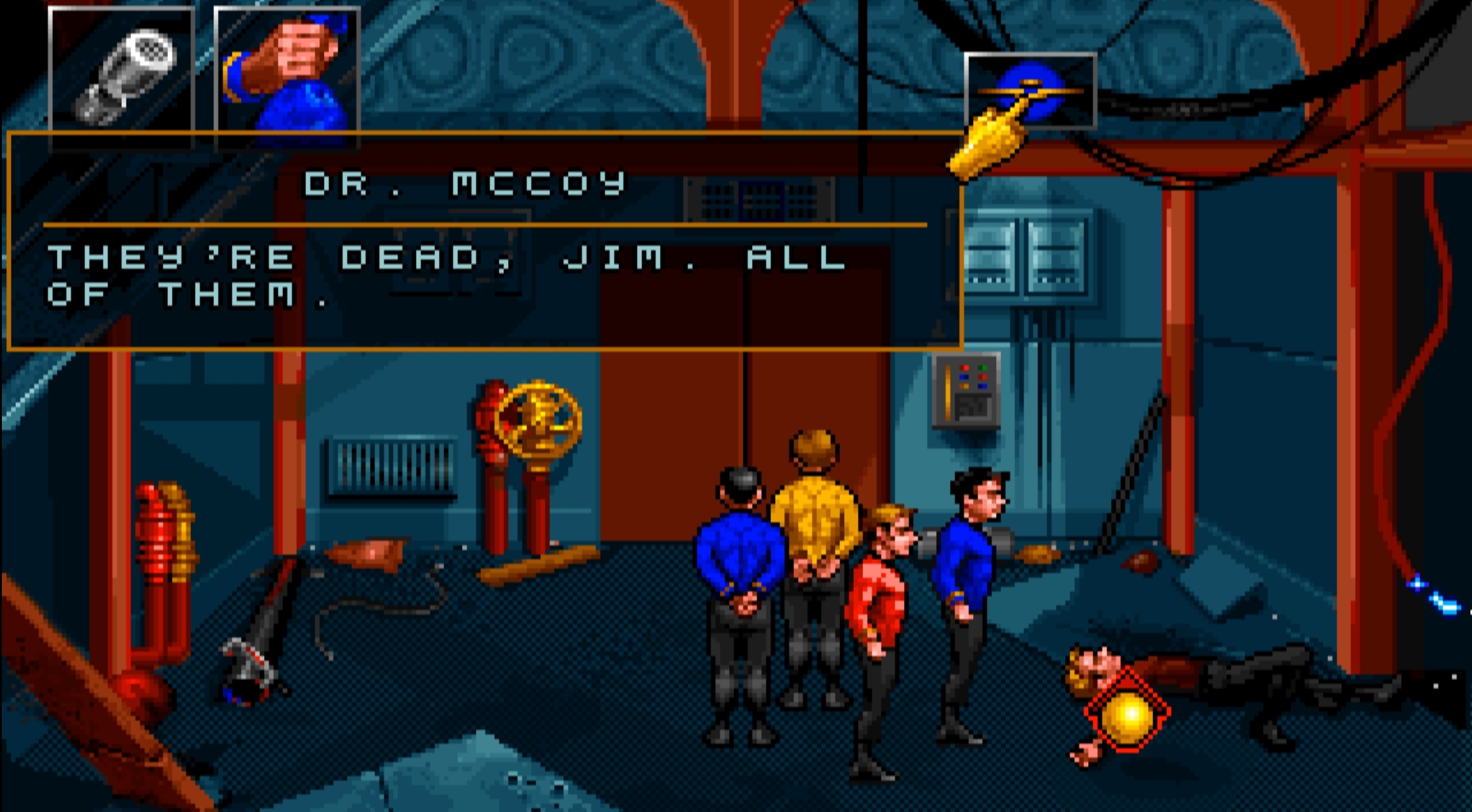 But let us go back. Waaaaay back, to a confusing mixture of the '60s and the '90s. Interplay, they who had brought us Bard's Tale and Wasteland, and would go on to give us Stonekeep and Fallout, were turning their hand to the graphical point-and-click adventure. And in this era, that was a thriving territory, dominated by Sierra and LucasFilm Games. But rather than offering up an also-ran, a Star Trek Quest, they decided to do something far, far more complex, working in not just the episodic format, not just all the different ways a story could unfold, but also space combat and bridge crew simulation. Not all to complete success, admittedly, but the ambition! And I don't mean that entirely patronisingly either - frankly Telltale should have been embarrassed to have fallen so far short so many decades later.

Oh, and they got the entire franchise cast to do all the voice work.

It seems absolutely extraordinary now that the stars all showed up to record so much dialogue. Reams of it. At the peak of Star Trek's movie popularity. This was genuinely the equivalent of getting the cast of Avengers: Endgame to all do voices for a little tie-in adventure next year. 25th Anniversary came out a year after the release of the actually good Star Trek movie, The Undiscovered Country. Certainly they were getting on, but they were still properly famous, still a big budget movie draw. And they schlepped in for this! And sure, you can literally hear their ill-fitted false teeth in their dialogue, but come on, it was the real them! 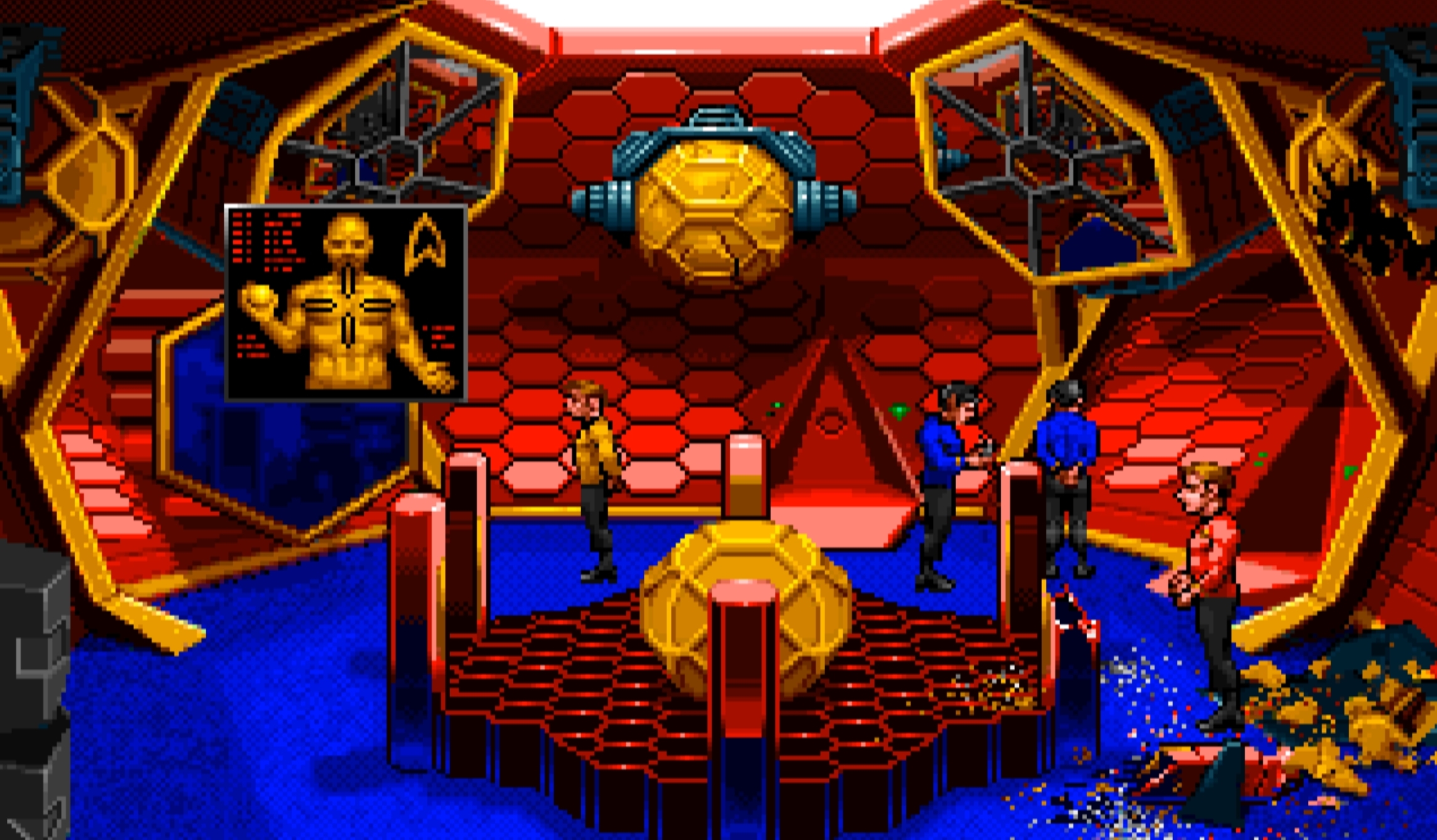 So it's the real Bones and the real Spock bickering away like the married couple they definitely really were, the real Scotty speaking in that strange alien accent, the real Chekov and Sulu being given barely any lines to say, the real Uhura in her role as spaceship secretary. And most of all, it's the real William Shatner being the real James Tiberius Kirk before he fully became the real bilious old git he is today.

The sheer volume of writing and recorded dialogue here is astonishing. Look at your crew mates in a landing party at any point and you'll get a description relevant to the scene. Choose to do something daft with something in your inventory and there's a good chance there's a scripted response. At one point, after Ensign Redshirt was squished by a rock, I aimed my phaser at him. McCoy interrupted, "He's already dead, isn't that good enough for you?" 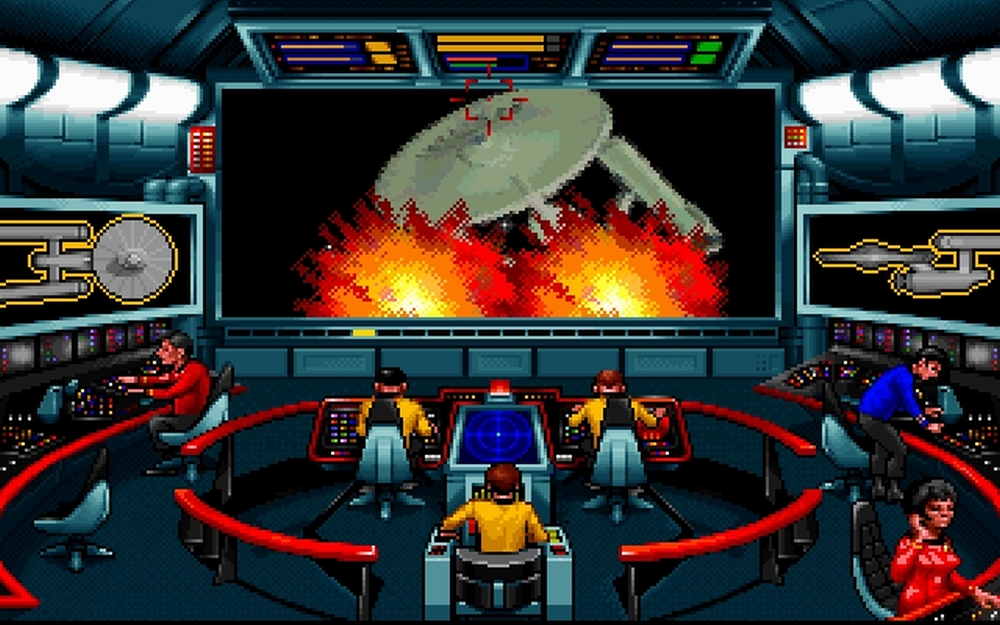 People die! And with that same casual uninterest that made the programme such peculiar viewing. That squished redshirt? Meh. During negotiations with a hostage taker, talk to him too often and he starts killing hostages, reported to you via Spock's cold declaration that "there's one fewer life form on the Masada". (At least he gets "fewer" correct.) You slip up and no-names drop dead left right and centre. Major (non-crew) story characters can live or die at the end of a mission depending upon how you approached it. The only "consequence" is your Starfleet rating at the end of the episode will be lower, which has no significant impact, beyond personal shame.

Oh, and the computer database! While on the bridge, you can enter search terms into the computer, and receive detailed background information about characters, alien races, planets, many not even appearing in the game. There's an entry for Tribbles, for instance, despite there never being mentioned. And while this may not seem such a big deal as you hover to work reading your Wikipedias, this was 1992! The world wide web hadn't even been invented yet. And the game came on floppy discs! 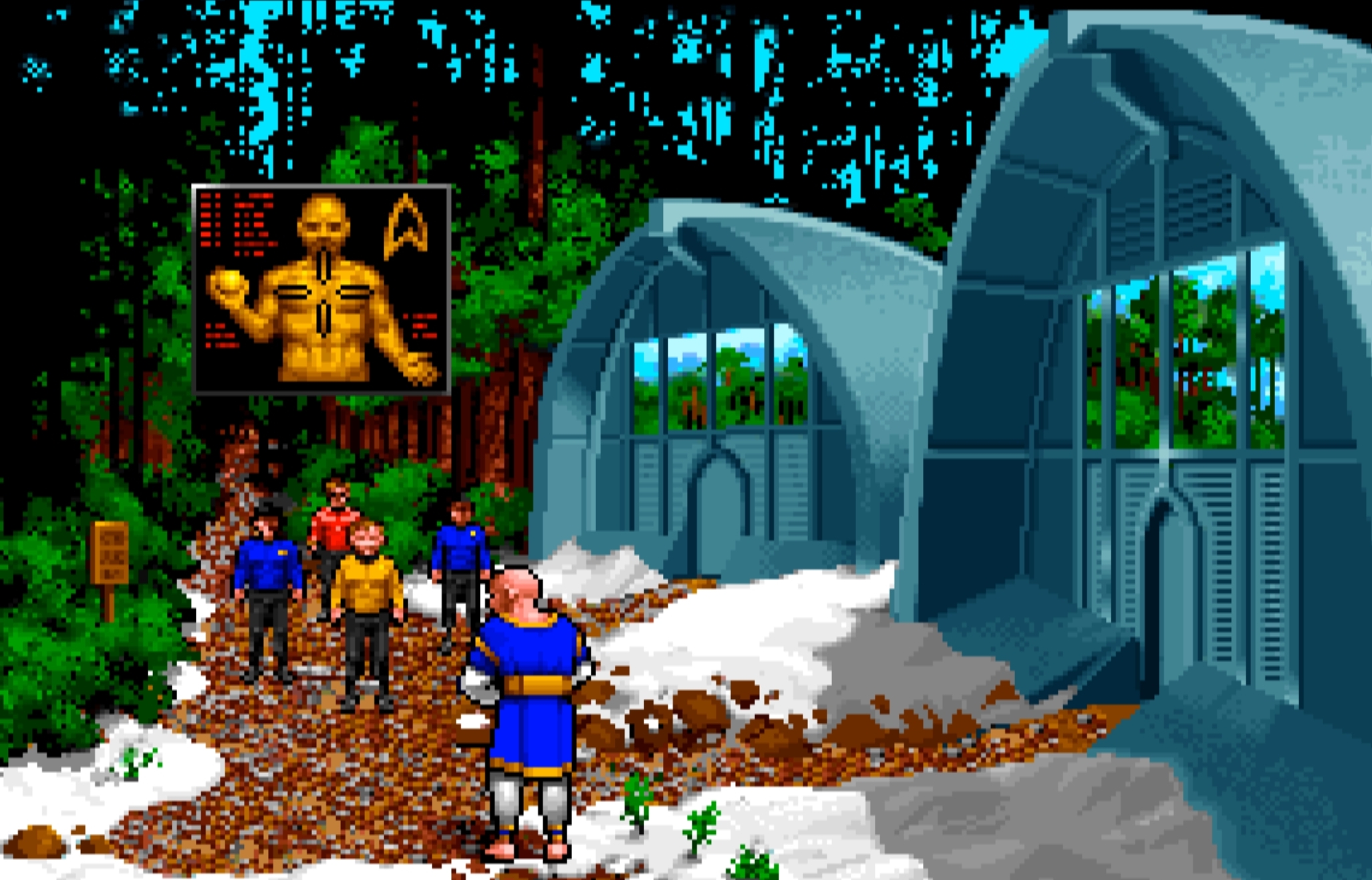 It's also absolutely riddled with issues. Issues that were, at the time, peculiarly accepted by both players and press. It was not unusual in the early '90s for graphic adventure games to be released with absolutely whopping mistakes in them, game-ending plotholes that meant reloading an old save if you still had one, or starting over if you did not. I think I'm correct in recalling that the sequel to this game, Judgment Rites, was the one where if you didn't pick up a particular object in one mission, far later in the game it became completely impossible to continue. And people went, "Gosh, how annoying," because there wasn't an internet to cancel the developer upon.

So that issue I had missing the single light on a desk of hundreds, while perhaps the most egregious, is hardly an anomaly here. There are all sorts of persnickety moments, some I stumbled upon through luck, others through frustration, a couple by walkthrough. The latter feels so shaming in 2019, but it's interesting to reflect how guides were an integral part of adventure gaming in the '80s and '90s. While you couldn't delight the SEO department of a Google hungry site with your click, monthly magazines would contain pages upon pages of step-by-step details for completing such games. And there'd even be write-in tips sections, where impossibly patient readers would post a letter asking how to get the paperclip from the goblin or whatever, wait around a month for the magazine to come out to see if their question had received a reply, then reload the game to carry on! IMAGINE IT YOU AWFUL YOUNG PEOPLE WITH YOUR PHONES AND YOUR SCOOTERS. Heck, games even came with tipline phone numbers printed in the manuals for when you got stuck. 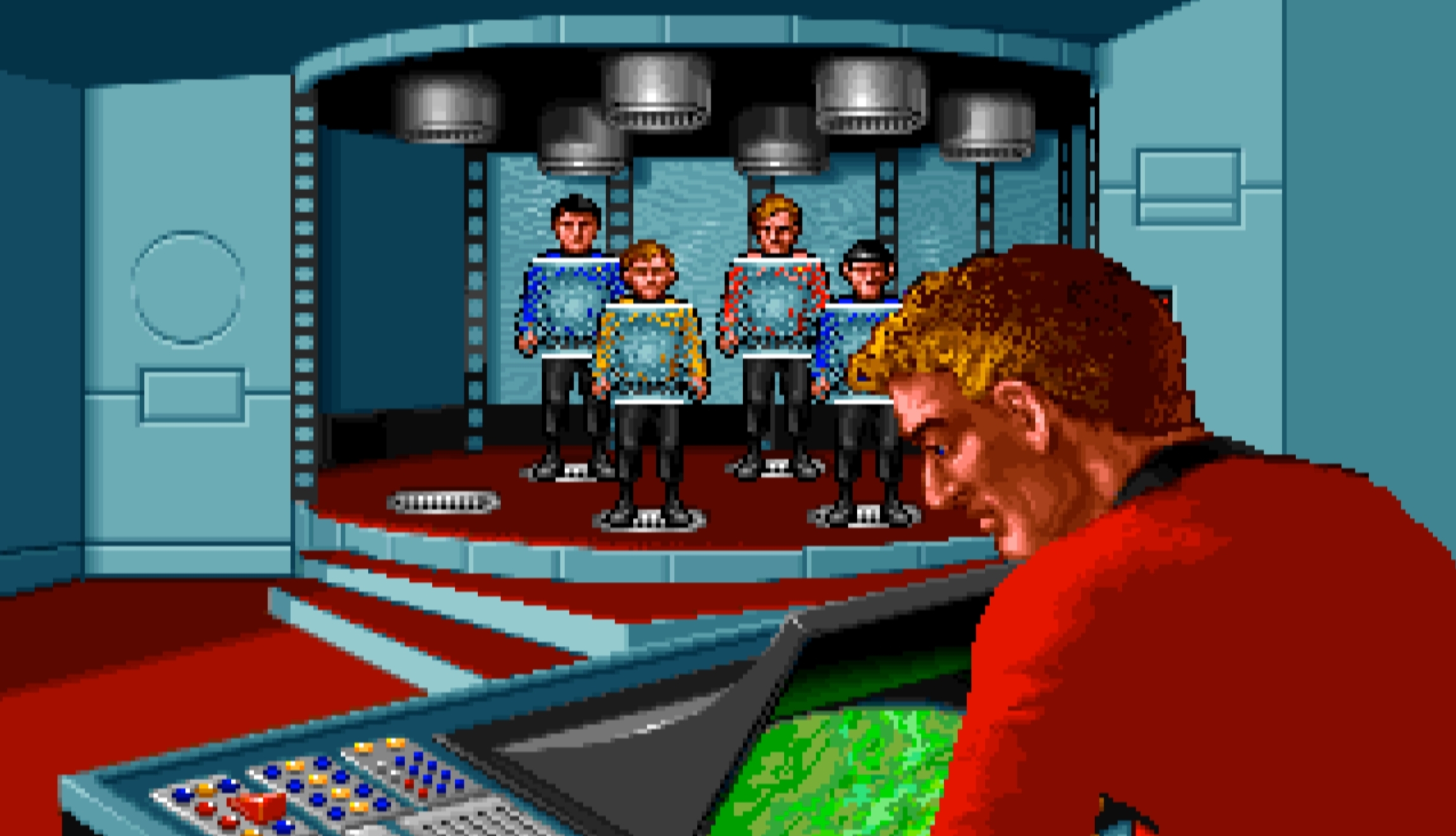 There is a more significant problem in this instance, however. The space battles. They're absolutely bogglingly terrible, as you flail in vast space-circles to try to empty photon torpedoes into cloaked enemy ships, but for the most part a tiresome chore to get past. The final one, however, is absolutely flat-out horrendous, and after maybe an hour of repeatedly failing at the same one-minute-long battle, I've had enough. I'm not alone, as you'll see if you too Google how the bloody hell to get past it. It's such a shame that I couldn't, but still, because I'm so young and modern, I watched the ending on YouTube instead. (I've no idea what he's done in this video, because the enemy never sits still like that to be shot at.)

Yet I still come away absolutely gobsmacked by what this game offered. Episodic adventure gaming nearly two decades before it became a common thing, genuinely different outcomes depending upon the decisions you make, vast amounts of contextual recorded dialogue, and a bunch of new ST:TOS storylines that feel like they fit right in with the original series. There's even a Harry Mudd tale in there! And it's worth giving credit to the narrator, Catherine Battistone, who must have been recording dialogue for days and days - sounding presciently and uncannily like Jennifer Lien (Kes in Voyager), which is pleasingly fitting in hindsight. 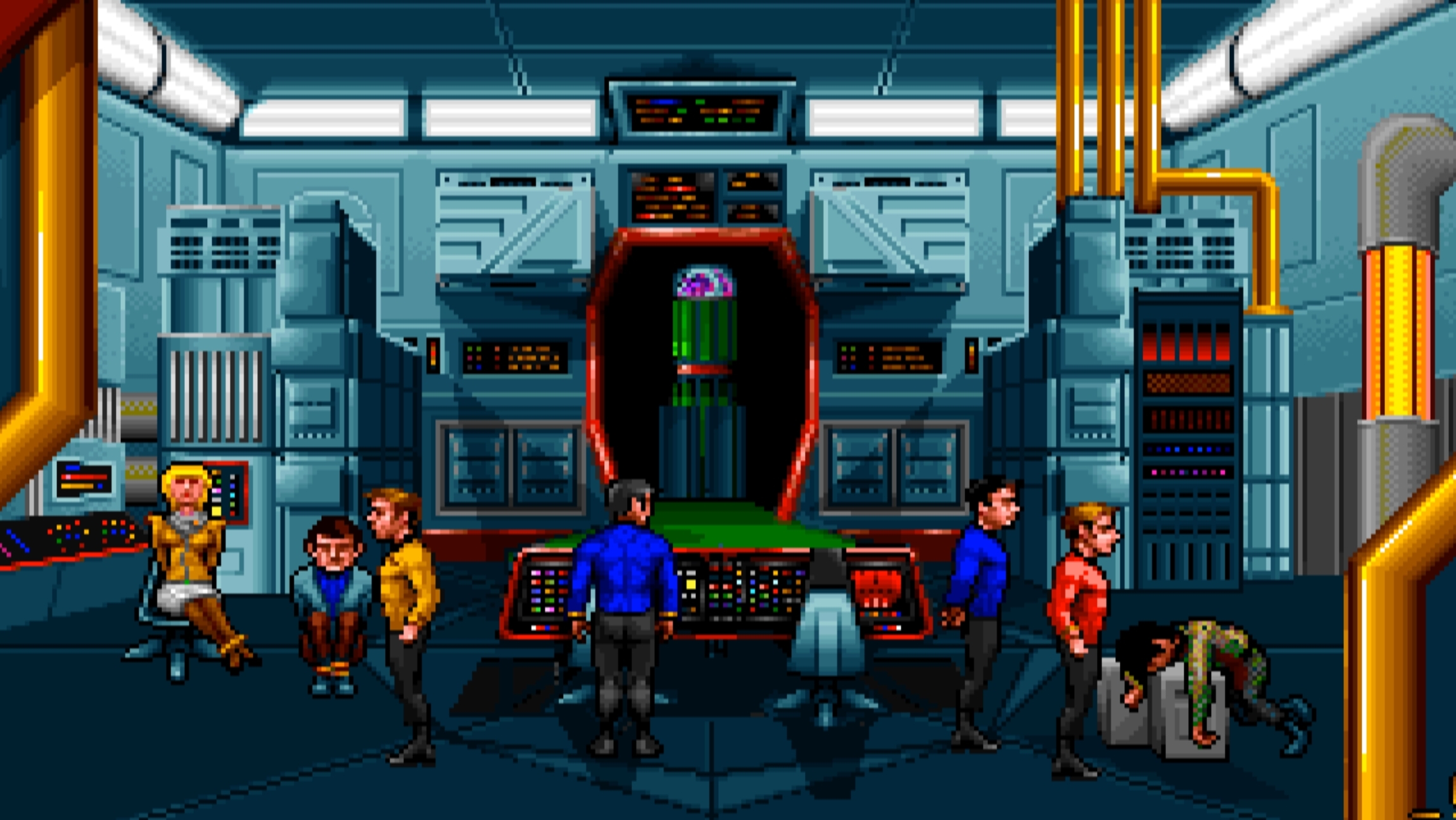 What's really noticeable here is how the game feels more heavily influenced by text adventures than it does with where Sierra had taken the genre once it ditched the parser. The language used, the descriptors, even the computer search engine, all feel like something that better translated those text-only games to a graphical place, making me wonder how different the whole of '90s gaming could have been were it Interplay who had led the charge.

I'm not particularly a fan of Star Trek (despite apparently knowing an enormous amount about it for some bloody reason), especially not the The Original Series, but this made me feel like one for a bit. It's nostalgic across two time zones, it's intricately detailed and well written, and despite some proper issues, it's still a very fun adventure game. Which I was absolutely not expecting. 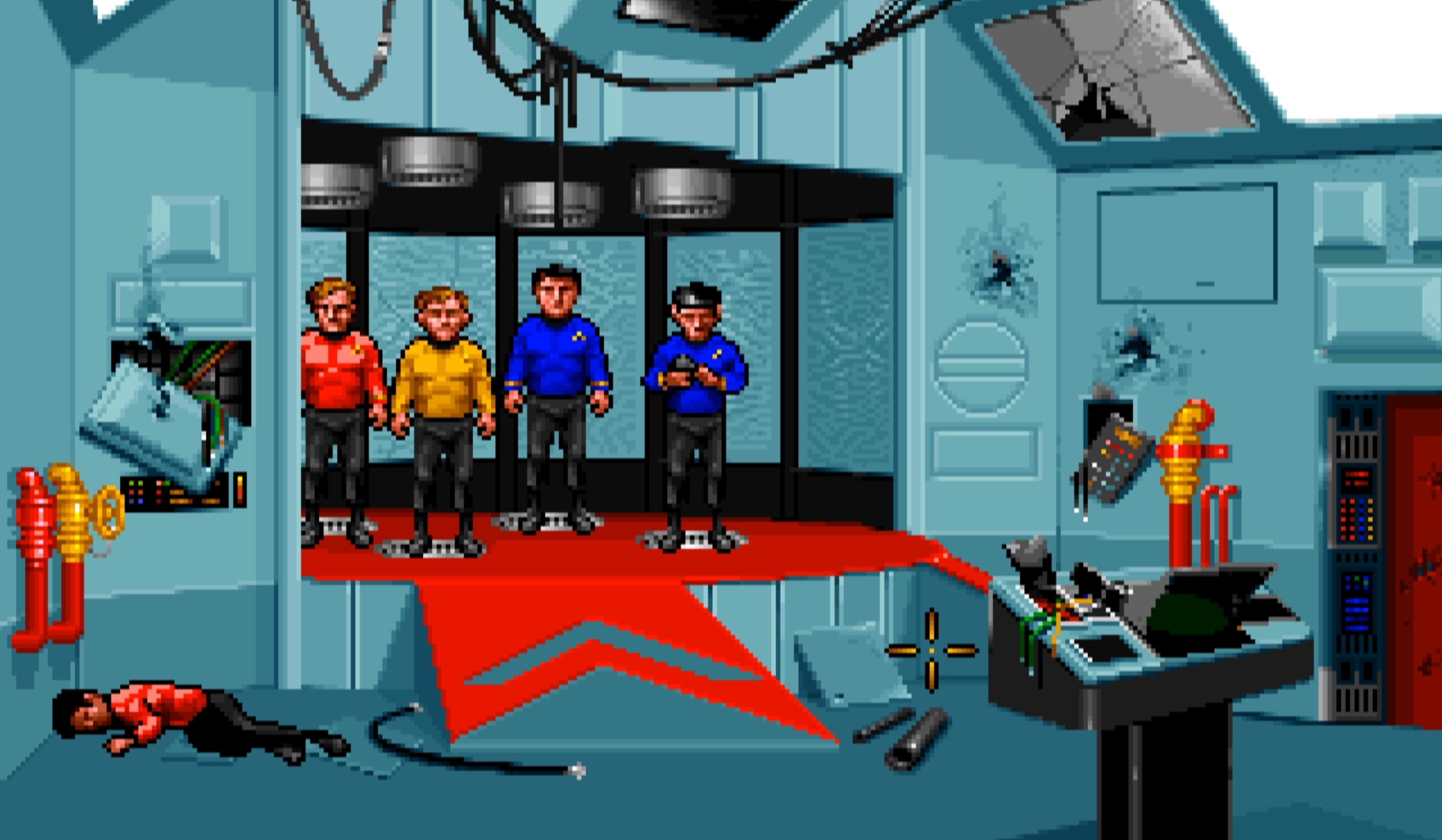 You certainly can. Both the GOG and Steam versions run in DOSBox, and stretch from their original 640x480 to fill a modern screen nicely. I had no issues with the mouse, which can often be a problem in such games, and it all ran perfectly.

I really think so! With the hefty caveats that this was a slightly wonky game on release, and that you might never complete the final battle (and thus miss two minutes of bridgebants), there's just so much here that feels outstanding today.