Star Wars Battlefront 2 [official site] can make the same claim as its predecessor: you’ve never seen Star Wars looking this pretty outside of the movies. Birds flutter around the lush vegetation on Naboo and Takodana, and explosions scatter dust and dirt everywhere as laser fire lights up the battlefield.

I’ve been playing in the beta, and I’m happy to report that while Battlefront 2 surpasses the audio visual spectacle that was the only exceptional feature of the first entry in the series, it's also a deeper and more interesting game.

The floating power ups that Alec said were the game’s “answer to everything” in his Battlefront review have been entirely done away with. Battlefront 2 improves on every system, from the addition of separate classes to better thought out star cards. Every class has a different type of gun, which already makes for far more interesting shootouts than when everyone wielded minor variants on the same assault rifle. The star cards work in a similar way to how they did before, providing abilities that can be activated on a short cooldown, but now they cement the different roles of the various classes. Heavies have access to protective shields and chain guns that slow their movement, while assault troopers are equipped with shotguns for short range charges.

Most importantly, the shooting feels satisfying in a way that it just didn’t before. It’s hard to make a laser feel like it has as much impact as a bullet, and the game still falls short of providing the visceral thrill that firefights in Battlefield or Call of Duty do - but it's so much closer now. I put it down to the way Dice have dialled up the reaction animations, with laser blasts and explosions that send the models sprawling backwards from incoming fire. The way your armour gets spattered with mud and burn marks is another nice touch. 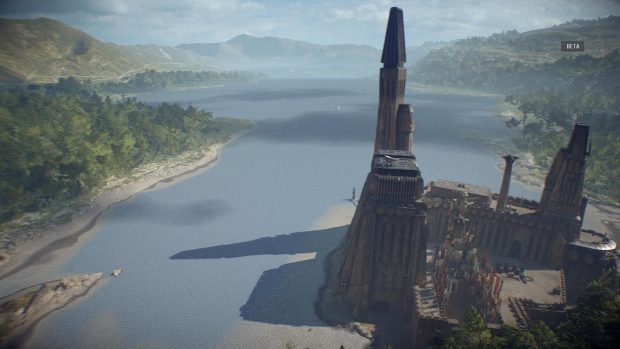 You can no longer spawn on a squad partner, and are instead assigned a new squad each time you respawn. Fighting alongside your squad earns you more points than if you go solo, which works as a greater incentive for teamwork than other games usually manage because those points can be spent on spawning as special classes. It’s similar to the system that the 2005 game used, except you only get one life as them rather than unlocking a class for the whole round.

Every army can spend their points on a jetpack toting aerial trooper, as well as a unique special unit. Separatists get super battle droids, and the clones and rebels can play as wookies. The special First Order trooper carries a flamethrower which is disappointingly underpowered, even compared to a normal class. Hero units have been folded into that system as well, and are expensive enough that I could only afford to play as them once in a round if I chose to save up for them. It’s a vast improvement on the first game, where whoever got to play the hero was just whoever happened to be closest to where the power up spawned. 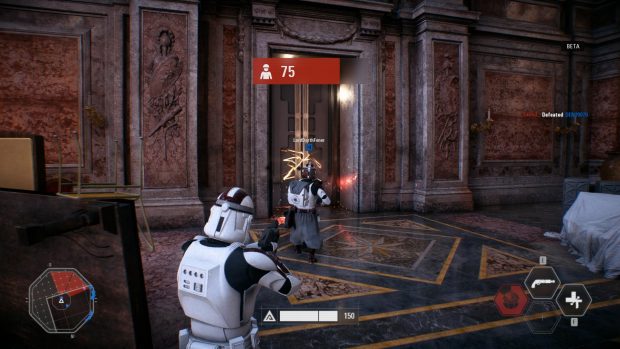 Galactic Assault is the game’s flagship mode, offering 40 player matches with a full roster of vehicles and heroes available to buy. Vehicles are bought with the same Battle Points that you can spend on special classes and heroes, and include flying vehicles. There’s little point in picking them, however - it’s got the same problem as the Battlefield series where aerial fights are too removed from what’s happening on the ground, with jets that move too fast to target infantry. The exception to that is when one comes crashing down to the ground in the middle of a shootout, sending both sides scattering in a fiery explosion.

Naboo is the Galactic Assault map available in the beta. In the first stage, Separatist Droids escort an MTT to the gates of the Royal Palace. The clones can only damage it with Ion rockets that spawn in various places on the map, which creates a more interesting dynamic than simply attacking or defending. If the Separatists can bring the MTT in range, it blasts down the entrance to the palace and triggers the next stage of the map where they attempt to storm the building. 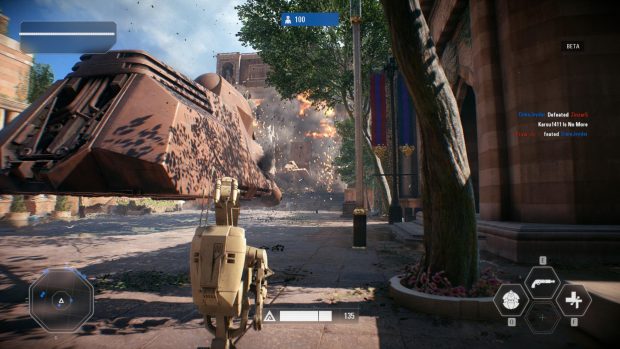 Unfortunately, this is easily the worst bit of the beta, with the action getting bogged down in the same kind of corridor fights that plagued indoor sections of the first game. There are just too many people packed into too small a space, with grenade spam making it next to impossible to move through the narrow choke-points. A hero can sometimes help the droids gain a little ground, but I’m yet to see them actually win a round.

Strike mode strips away some of the spectacle from Galactic Assault, with only 8 players fighting on a smaller, infantry only map. The beta map has the First Order attempting to retrieve an artefact from Maz’s castle, defended by the rebels. It’s got some of the same corridor problems as Naboo, though the reduced player count makes it much less of a mess. I actually found myself enjoying it more than Galactic Assault - it’s nowhere near as grand, but that makes individual plays feel more significant. 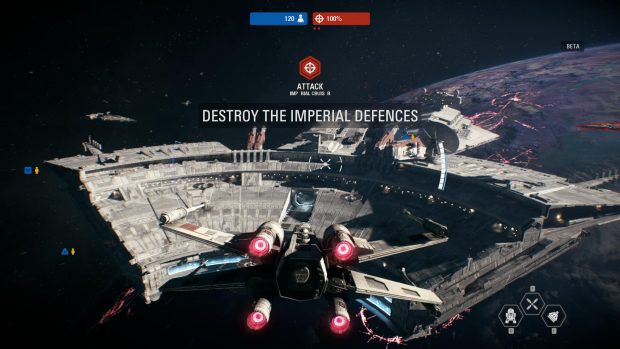 The third mode is Spaceship Assault, which was introduced in the Death Star DLC for Battlefront but will be available from launch in Battlefront 2. I didn’t spend much time with the first games spaceships so can’t say too much about what’s changed, but I did notice that aerial maneuvers have been removed. It means there’s a bit less to think about, but it’s probably for the best - the ‘loop the loop’ button provided a frustratingly easy way for opponents to flip the tables during a dogfight.

Getting blown up from miles away with no chance to retaliate is still a thing, unless you’re flying a bomber with its inflated health pool. Once you earn enough points you can take some of the more famous spaceships out for a spin, including the Millennium Falcon and Poe’s X-wing. I did get a kick out of flying the Falcon, though I only saved up enough for it once and managed to crash it within 60 seconds.

There’s also an arcade mode, which acts as place to practice for the multiplayer. One of the ‘Battle Scenarios’ available in the beta is just a straight up team deathmatch with only the basic classes enabled, but in the other you play as Darth Maul. It’s a good opportunity to try him out, seen as you’ll want to make the most of him if you spend points unlocking him in an actual game.

Star Wars Battlefront 2 has gone from a game I had next to no interest in to one that I'm excited to play more of. With more satisfying gunplay and a class system that provides some much needed variety, it's miles ahead of the disappointing first game. If the maps in the full game avoid the clumsy corridor brawls that undermine sections of the beta, it'll be one of this year's best multiplayer shooters.

You can grab the open beta for yourself on Origin, and play from now until October 9th.

Star Wars Battlefront 2 is due for release on November 17th.