Group chats, embedded multimedia, and an invisible mode are among the new features coming to Steam's Chat in a long-overdue overhaul, Valve announced today. The new style will drag the barebones chat client out of the 90s and into the Discord era, and you can try it in the public beta test right now. Just imagine: creating new group chats and voice channels as you please; the Friends list showing in-game parties; GIFs and videos and such appearing embedded in chats; and inviting people to group chats with a link. Ooh it's like modern software or something!

You can create ad-hoc group chats with multiple text and voice channels starting simply by dragging people into a chat. Text chats now show link previews and embed media including YouTube videos, tweets, and Twitch streams. The /giphy command hooks into those ha-ha-hilarious repositories of GIFs. You can even do /me emotes like the good ol' days.

Basically, the new Steam Chat covers just about everything I use Discord for. I don't plan to swap over, as I followed people more than the service, but it's good to have options. 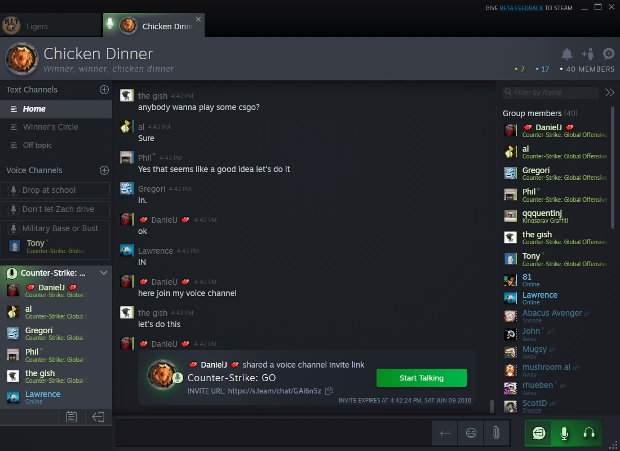 Voice chat is updated too, and now relayed through Steam's servers so it doesn't reveal your IP address. And the whole voice chat feature isn't hidden away, now integrated into sensible places.

The new Steam Friends list groups people by the game they're playing, and shows if they're in parties together as well as where they are in a game (in games which are updated to support this, anyway). And you can save favourite pals by dragging them to the top for easy access.

Ah, go look at Valve's page for more on everything. I think I once would've been annoyed by Valve cluttering Steam Chat with features I might not use but hell, we're probably a good few years past that point as other chat clients have evolved such much and Steam's has stayed so barebones.

Valve are currently testing the new Steam Chat in a public beta, which you can opt into through the client's beta options or simply by clicking this link.

"Once we're confident that things are working as they should, and we've finished up some of the features we have planned," they say, "we'll flip the switch to release all of the new features to everyone on Steam."

The browser-based Chat is updated too. See for yourself.