Valve plan to add optional profanity filters to Steam Chat, and it'll also be able to filter language in games which use Steam's own chat system. If you want to block effing, jeffing, and slurs, you'll be able to fiddle with a load of settings and filters to add and remove words and otherwise fine-tune your chat civility. If you don't want to filter chat, no worries, just don't turn it on. This system debuts today as a Steam Labs experiment so Valve can gather feedback and improve it, then they plan to launch it as a regular Steam feature "soon."

Valve say this builds on the chat filtering they made for games like Dota, CS:GO, and Destiny 2, turning it into a central part of Steam so the same rules apply to chat in the Steam client, mobile app, and any games which support it. You'll still see everything you type, even if you have filters enabled, but filter-users receiving messages will see "♥♥♥" or "***" symbols replacing any words they forbid.

"With chat filtering, we've obscured the most offensive language shared on Steam," Valve's announcement explains. "You can alter your settings to control whether profanity and slurs are displayed, and because each player's tolerance for difficult words is unique, we've included the ability to add or remove words to form your personal filter. You may also upload lists of words or phrases from other sources, empowering groups and communities to work together to define and share your own sets of language guidelines. We believe this level of control is especially important given that language is constantly evolving and is used differently among various communities around the world. So with Steam chat filtering, we've made sure you can choose to filter language as much as you want, or not at all."

Visit your Steam account settings to opt into Experiment 011's filtering, if you want. Don't if you don't. It does also have an option to show profanity and slurs from people on your Steam Friends list but not strangers. Looks like this: 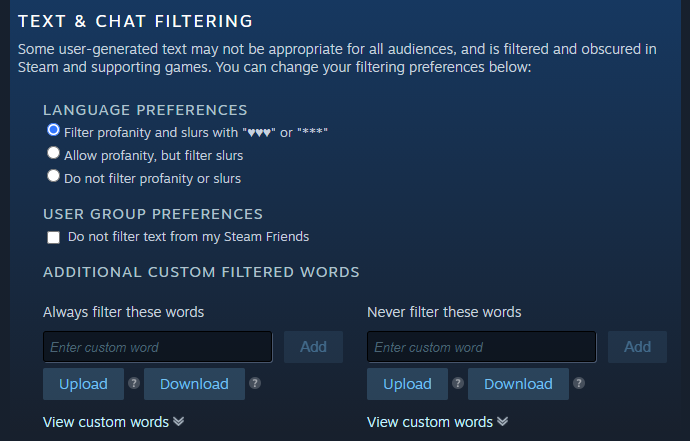 Valve explain that they've built two default lists of filtered language, one of strong profanity and one of common racial, religious, ethnic, and other slurs. And they have statistics!

"We built our English lists from a variety of sources, then searched for instances of them across a large sample of in-game chat. Based on this sample, we've found that by filtering variants of the top 5 most commonly used strongly profane or hateful words, we can eliminate about 75% of profanity and slurs used in chat. Over 56% of the instances of profanity or slurs found in our sample were a variant of f***. Another 10% of them were variants of s***. Another 10% were instances of potty-mouth school yard language we've chosen not to filter as strong profanity or slurs. The remaining 24% of the instances were strong profanity and slurs we found to be used commonly enough that we've also added them to our lists."

I'm a little surprised by the breakdown of cussing. Who says s*** that much? Thinking about my own swearing, maybe 5% is a s*** variant then at least 17% is b****** (not b****, to be clear). But 56% f***, yeah, that about checks out. Though I'd struggle to quantify all the cusses muttered under my breath, which are definitely harsher.

If you're a dev who wants this in your game, Valve point towards the Steamworks documentation to get started.