When Firaxis brought XCom back to life, it felt like an oasis of squad tactics in the middle of a boundless, barren desert. Now, the heavens have opened and the great deluge has begun. We're practically drowning in squad-based tactical combat now, and the latest game threatening to drag me under this rising tide is Steam Marines 2. Sequel to tactical roguelike Steam Marines, the very first public alpha build of this promising squad tactics game has just breached the hull of Itch.io, and has begun sweeping for threats.

After playing a couple of (failed) missions thanks to a handily provided preview copy, Steam Marines 2 feels a little more like classic tabletop Space Hulk than modern-day XCom, even though there is a more modernized display of to-hit chances. Still, lethality feels high, and unchecked corners are death, as is splitting your squad. Four marines (up to six later) in chunky pseudo-steampunk armor follow your commands in traditional turn-based fashion, shooting robots and aliens in randomly generated maps, although the general campaign structure seems partially hand-built. 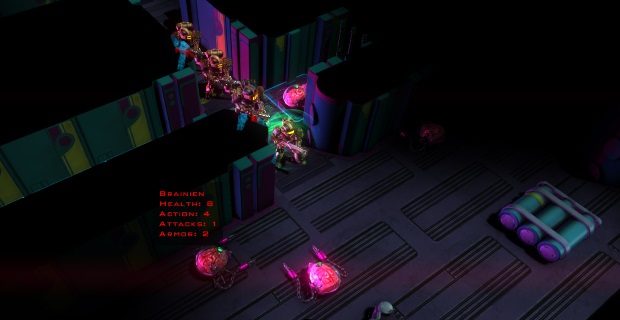 While it seems unfair to critique a first alpha build too much, one thing I feel the current version of the game could improve on is feedback, especially regarding enemy attacks. I lost my commander on the second turn of my first game to threats unknown. There was a sci-fi laser 'Pew' noise during the enemy turn, and the screen instantly turns black, informing me that my avatar has gone and croaked. No death animation, no kill-cam, just game over. The UI also feels a bit raw and programmer-art'y at the moment, although that seems par for the course for a first public alpha.

I'm still just figuring out the basic tactics of the game in lieu of an in-game tutorial, and it would seem that some enemies are capable of attacking from beyond player sight range, so I'm going to have to learn to be very cautious around corners from now on. There's also great potential for the game to change - the developer states on their Itch.io development blog that depending on what kind of feedback they receive from players, the scope of the game may shift towards broader strategic decisions, tighter tactical gameplay or something else entirely.

If you want to poke around this early build of Steam Marines 2, you can grab it for $25 via Itch.io here.