Valve have overhauled the privacy settings for Steam user profiles, letting us hide more data and setting more of it to be hidden from strangers by default - including the list of games you own. Good. More online platforms should default to hiding personal data. We can now hide our playtime on games if we want too, so our pals can e.g. see that we own The Binding of Isaac: Rebirth but not that we've played it for e.g. 871 hours, in case we feel e.g. shame about that (not me: I'll tell you it's just that good).

This does have the knock-on effect of locking out Steam Spy, the popular non-Valve site which scans vast numbers of public profiles to estimate how many people own a game and how much they play it. In a secretive industry, it's one of the few ways to have a sense of how well a game is doing.

Steam's new 'game details' privacy setting covers things including, Valve explain, "the list of all games on your Steam account, games you've wishlisted, your achievements and your playtime. This setting also controls whether you're seen as 'in-game' and the title of the game you are playing." You can also choose to keep your total playtime on games private, even from people who can see your game list.

You can set game details to be visible to everyone, only to people on your Friends list, or only to yourself. By default, everyone is now set to friends-only. Thanks to an error, you can't currently change that from within the Steam client or some browsers. The privacy settings menu is broken in both Steam and Chrome for me, though it does work in Microsoft's Edge. Yep, that's a big mistake.

Valve say they're also planning to give Steam an "invisible" online status option, where "you'll appear as offline, but you'll still be able to view your friends list, send and receive messages."

Some have speculated that this might also be related to the General Data Protection Regulation (GDPR), a European Law focused on making companies be more responsible with our data, which comes into effect in May. One tenet of the GDPR is having personal data be private by default, making users opt into sharing rather opting out - giving consent, not withdrawing it. Whatever the reason, it's responsible to keep data private by default. Steam should hide more, really.

Setting everyone's Steam library to be private by default does cause problems for third-party sites which rely on them being public. Some are fixed by changing your setting. Steam Spy won't work at all.

Steam Spy is a site which estimates owners, players, and playtime for all games on Steam - data that Valve keeps secret. It does this by scanning around 800,000 public user profiles per day then extrapolating for the entire Steam userbase. Many developers have said SteamSpy's estimates broadly line up with their actual sales figures, though some have found it less accurate. Seeing as Steam Spy draws from game lists on public profiles, setting this private by default seems to kill the site.

"Steam Spy relied on this information being visible by default and won't be able to operate anymore," owner Sergey Galyonkin tweeted last night. The number of people who now choose to set their profiles public would be too small and too self-selecting to be useful data, and it sounds like other possible techniques would be too imprecise and too much work. "I'll probably still keep the archive," he added. 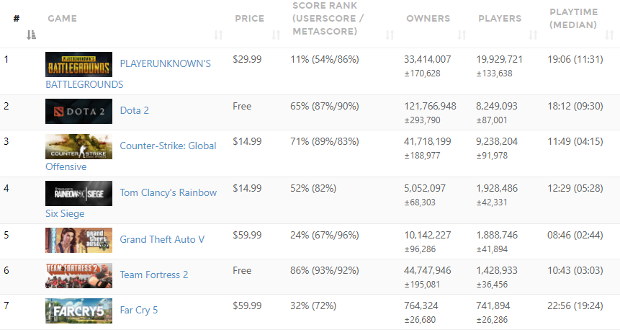 On one hand, I have seen many developers talk about using SteamSpy numbers to help make business decisions. SteamSpy's estimates are one of the few points of comparison available in an industry that's so secretive - and so volatile. This is a loss.

On the other hand, I have also seen a great many players using SteamSpy numbers to advance damned foolish arguments. When many people have a poor understanding of the business of games, SteamSpy's numbers are often used to support--rather than challenge--misconceptions, stoking antagonistic sentiments and insistent opinions about what developers should do. A little knowledge is a dangerous thing. Some developers, including Wadjet Eye back in 2015, have expressed discontent with fans using Steam Spy's estimates to incorrectly speculate about their success and fate. Spectating the industry can be fun but it's often to harmful ends.

If you've been using SteamSpy to check whether a multiplayer game has a healthy number of players, you can still use Steam Charts to see concurrent playercounts, as that uses data Valve do make publicly available.