Until Logitech's G Pro X gaming headset came along last month, Steelseries' Arctis 7 had been sitting unchallenged at the top of my best gaming headset list for absolutely yonks. I still have a big soft spot for the Arctis 7 - it's still the best wireless headset you can buy right now, after all, as well as one of the most comfortable headsets ever made - but when every headset in the Arctis family is meant to come with the same 50mm audio drivers and soft ear cushion material, are you actually better off saving your hard-earned money and getting one of their lower-end Arctis headsets instead? To help answer that question, I've got the Arctis 1, the newest and cheapest member of the Arctis headset gang that will set you back just £50 / $50. Here's wot I think.

I must admit, I was worried about the overall comfort of the Arctis 1 when I saw it didn't have the same ski-goggle headband as its big Arctis 7 brother, but I'm pleased to say its lightweight, reinforced steel concoction was actually pretty damn great. I was able to wear it for an entire afternoon without any signs of the dreaded head pinch rearing its ugly mug, and its soft ear cups didn't feel like they were digging into my jaw, either.

Admittedly, I had to have the Arctis 1 on its tightest adjustment setting in order to get a comfortable fit, so it may not be such a good match for those with particularly small heads (although mine's already pretty darn tiny in the grand scheme of things). Still, provided you're not a small child or an even more petite lady than myself, the Arctis 1 should be able to go the distance if you've got a big weekend of gaming planned. 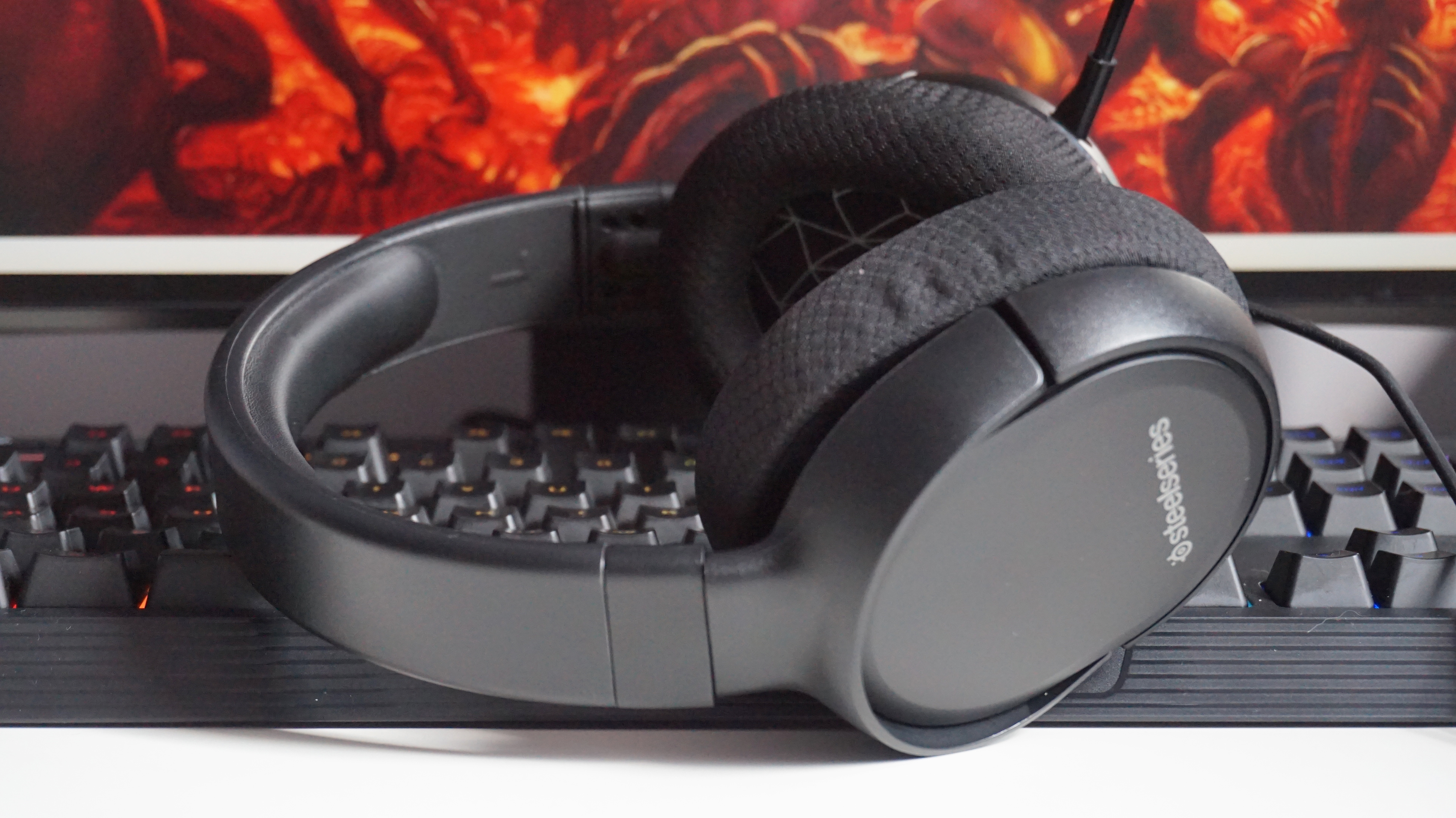 The detachable microphone is also one of the clearest mics I've tested in this kind of price range, as usually they're pretty token efforts at this end of the budget spectrum. There was still a teensy bit of background hiss, all told, but nothing out of the ordinary, and certainly not enough to interfere with what I was saying. It also handled consonants and plosive sounds very well, with only the smallest amount of breathy pop present when I let out a particularly big sigh.

As for delivering that Arctis 7-grade audio quality, err... well... it was a bit of a mixed bag, to be honest. In each of my test games, there was an undeniable dampness in the sound somewhere, sometimes manifesting in the music, while others it was more noticeable in a game's various sound effects. On the whole, it was still all right as far as budget headsets go, but it's also not quite the same Arctis 7 quality I remember.

In Doom, for example, my Super Shotgun had a lovely sense of bassy weight to it, but it also didn't sound particularly crisp or pronounced. 'Damp' is really the only word I can use to describe it, as if it started out with all the might of demon-crunching hell power when you pulled the trigger, but it ended up falling a bit flat by the time the shells leave the barrel.

There was still a decent level of detail to be heard elsewhere, such as the bone-cracking squelches of ripped off arms and splattered guts and gore all over the shop, but there was a definite bias toward the bassier end of the spectrum when it came to balancing them against its pumping battle music. Things slightly improved when I switched on Windows Sonic for Headphones my sound options, making gun blasts sound just that bit more distinct, but its muddy hints from earlier didn't go away entirely.

Hellblade: Senua's Sacrifice proved a much better companion for the Arctis 1, with each of the voices inside Senua's head coming through loud and clear. The main narrator still sounded a bit damp at times, as if she was speaking just a bit too close to the recording microphone, but overall there was a much better balance between the ominous background music and the dialogue / accompanying sound effects here. It felt a lot more immersive than Doom, and enabling Windows Sonic again only made it sound even clearer and crisper. 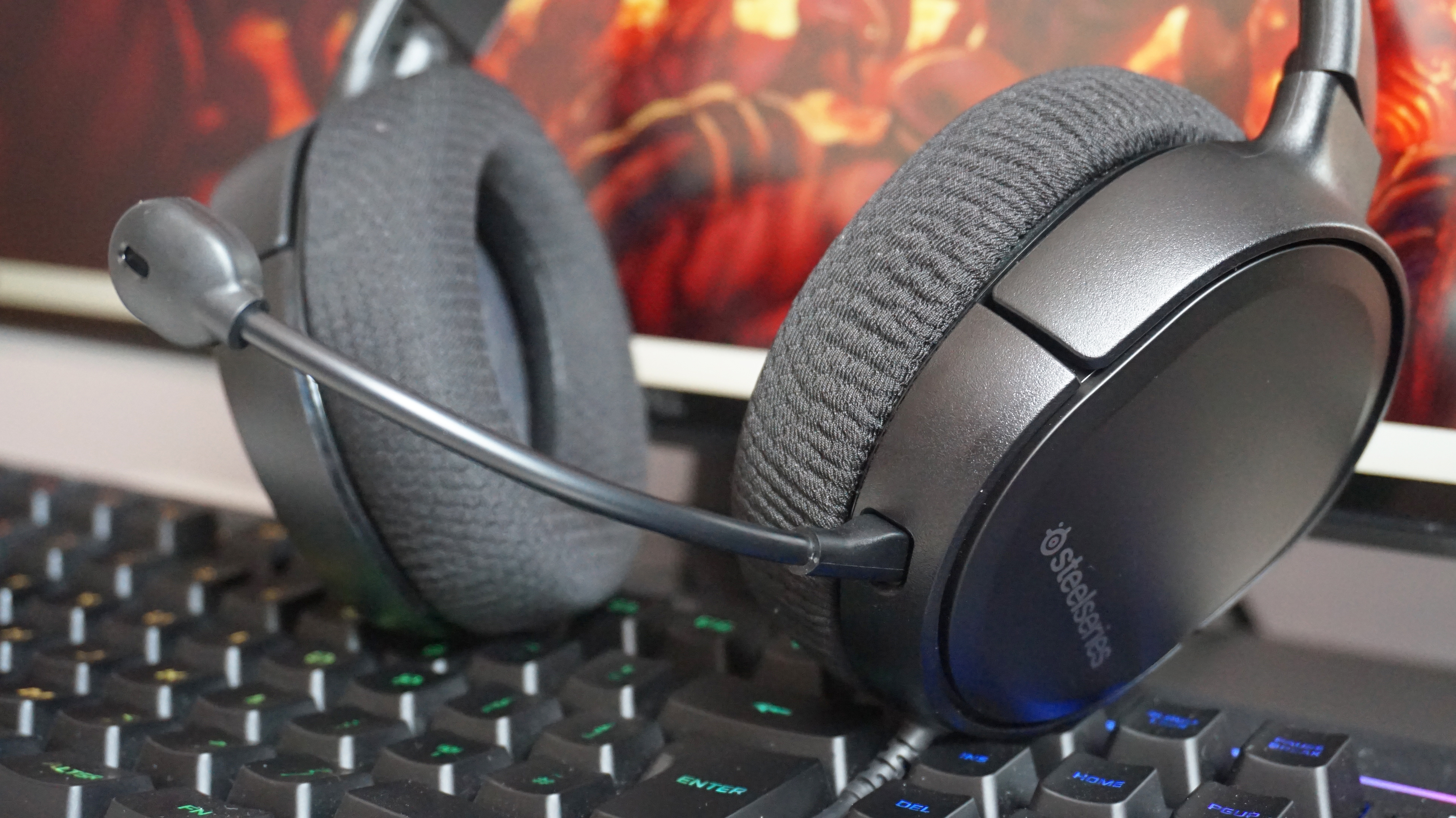 Final Fantasy XV, on the other hand, fell somewhere in the middle. As much as its orchestral overworld music sounded wonderfully rich and warm and full of detail, for example, it also felt noticeably detached from everything else going on in the game, making the whole soundscape feel a little unbalanced as a result. Noctis and pals' battle yells and zippy zappy sword sounds were much louder than the accompanying battle music, for example, and sometimes it all got a bit too much when I had them calling out to each other while doing lots of special moves all at the same time as the busy battle theme. I should say it did vary a bit depending on which battle music was playing at the time, but it's still far from being ideal.

And yet, as a regular music headset, I have absolutely no complaints. Both my Final Fantasy XV and Octopath Traveller soundtracks sounded great when I booted them up in iTunes, for example, and all the previous balance woes I had between the bass and the treble in-game completely disappeared. Each of their respective orchestras were full of detail and at no point did the percussion sound like it was drowning out the violins or piano on top. Rock and pop songs sounded great, too, with each vocalist holding their own against their guitars, bass and drums.

The Arctis 1 isn't perfect, then, but I'd argue it's still noticeably better than the really cheap headsets out there like the Turtle Beach Recon 150. It's got a much better mic, for starters, and is legitimately comfortable to wear for long periods of time - which is a rare thing coming from Mrs I-Always-Get-A-Headache-After-Wearing-A-Headset-For-30-Minutes. The Arctis 1's audio quality is still pretty decent overall for a £50 / $50 headset, too, even if there are some obvious issues with it, and for the most part it was perfectly serviceable.

It didn't impress me as much as the similarly priced Roccat Renga Boost, admittedly, but Roccat's increasingly scarce £50 / $50 gaming headset isn't nearly as comfortable as the Arctis 1, nor does it have as good a microphone. Plus, the Renga Boost is open-backed, making it less suited for use within earshot of other human beings, whereas the Arctis 1 is closed-back, letting you crank up the volume to your heart's content without annoying everyone around you.

Given a choice between the two, I'd probably go with the Arctis 1. However, I've also got two other £50 / $50 headsets waiting in the wings right now - the Logitech G432 and Razer's Kraken X - so this verdict may well change in the coming days. Right now, the Arctis 1 is probably the £50 / $50 headset I'd recommend going for at the moment, but watch this space to see if the Razer and Logitech have what it takes to knock it off its temporary perch.