It had to happen eventually. After an incredible 18 month stint at the top of our best gaming headset list, the Steelseries Arctis 7 must now give up its throne to the brand-new Logitech G Pro X headset. What a thing this is. Not only is this a great-sounding gaming headset, but it's also incredibly comfortable and has arguably the best quality microphone I've ever tested. That's thanks to its built-in Blue Voice technology (yep, that's the same Blue company that make the excellent Yeti USB microphone), and it's probably the closest you'll ever come to having a broadcast quality mic on a pair of gaming headphones. Here's wot I think.

Now I know what you're thinking. A gaming headset that ticks so many boxes must be ludicrously expensive like Steelseries' Arctis Pro, right? Wrong. It's still reasonably pricey compared to other gaming headsets out there, but at £110 / $130, it's also quite a chunk of change cheaper than many of its top-end rivals - including the Arctis 7. There will also be a cheaper, regular Logitech G Pro headset available later this month (review coming shortly) for just £85 / $100, but that one doesn't come with the built-in Blue Voice tech.

Still, if you frequently play a lot of online games with your mates, stream or even make regular voice calls on your PC or laptop, I think the Pro X will definitely be worth the upgrade. I was astonished by how much of a difference Blue Voice made to the overall clarity, depth and detail of my voice recording, and it was quite a step up from the recording I made with Blue Voice disabled.

Logitech's GHub software also makes it incredibly easy to set up the mic and tune to your liking, too. As soon as you plug in the Pro X using its USB sound card adapter, GHub asks you to record a sample of your voice, which you can then play back on a loop as you tweak and fiddle with the settings. There are plenty of options to play with, but even if things like 'High-Pass Filter', 'De-Esser' and 'Expander / Gate' mean absolutely nothing to you, there are loads of presets available as well. What's more, you can hear the effect straight away, making it quick and easy to find one you think sounds best.

One of the two Broadcaster presets will probably suit most people, as I felt these provided the clearest and richest presentation of what I was saying. That said, I also enjoyed playing with the AM Radio preset, as well as the Loud and Soft versions of the High Voice and Low Voice profiles. And if all that wasn't enough, there's also a sidetone control, which lets you hear yourself talk through the headset, a virtual surround sound option, and a dedicated equaliser menu, giving you loads of options to personalise your headset exactly the way you want. Alternatively, you can just let other people do the hard work and download their equaliser settings settings instead - including some of Logitech's sponsored esports peeps such as London Spitfire's Profit and various players from TSM among others. 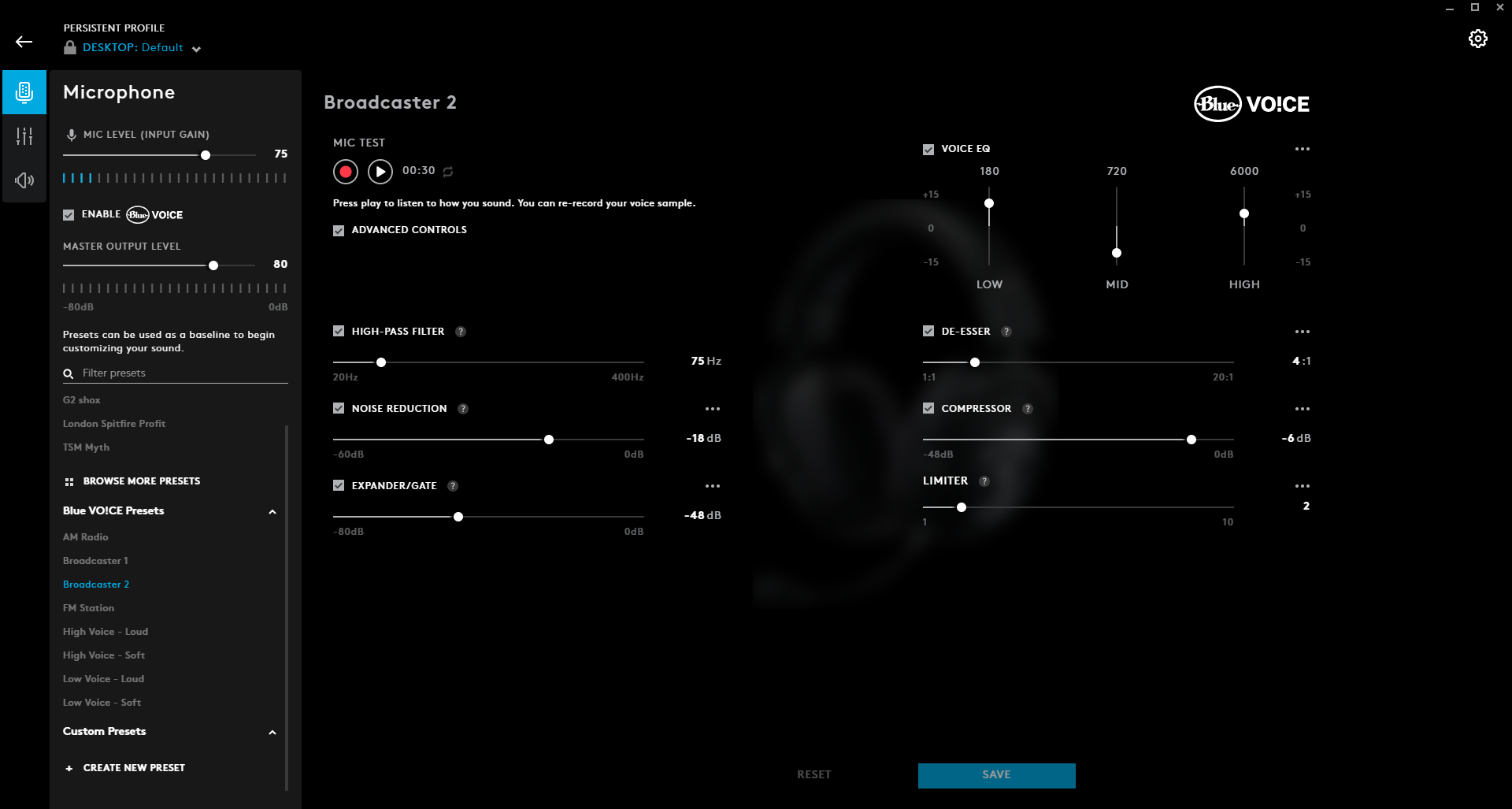 It's quite simply the most flexible and sophisticated microphone setup I've ever seen on a gaming headset, and I think it will be a long time yet before I see another gaming headset mic even come close to matching its overall quality and extensive menu settings.

The Pro X is also one of the most comfortable headsets I've ever encountered outside of the Arctis 7. That's right. I, the world's pickiest headband wearer, give the Pro X headband my full seal of approval. Made from a steel frame with memory foam padding, I was able to wear the Pro X for hours on end without even the slightest hint of discomfort - which for me is pretty darn impressive considering how many other headsets I've tested tend to transform into unwitting head clamps after little more than half an hour's use.

Unlike the regular Pro, the Pro X also comes with an extra set of velour ear pads if you're not a fan of leatherette, which are handily marked R and L to make sure you slot them over the correct ear cup. Personally, I found the leatherette ones kept my ears a bit cooler - particularly in this hot weather we've been having - but the velour ones were still perfectly comfy to wear as well. Plus, another benefit of opting for the X over the regular Pro is that you get a bundled carry case to keep all of its various bits and pieces in, such as its 3.5mm PC splitter cable, USB sound card (which you'll need for the Blue Voice stuff), the detachable mic, and an extra 3.5mm cable with inline mic for mobile devices (the latter of which also only comes with the X model).

I was also super impressed with the Pro X's sound quality, too. Even just using its default audio profile, games have never sounded so clear and rich with detail. In Hellblade, for example, I was able to pick out sound effects I don't think I've even noticed before, such as the rustling of the trees high above Senua's head. Whether they're normally drowned out by the ominous orchestral soundtrack or simply lost in the swirl of menacing voices inside Senua's head, I literally couldn't tell you. With the Pro X, though, it sounded like I was hearing the game properly for the first time. The leaves actually sounded like they were above me on the headset as well, while the gentle trickle of water from Senua's row boat was definitely coming from below, which is again something I've failed to notice elsewhere. The voices were also beautifully crisp and natural-sounding, creating an immersive soundscape that was both spacious and incredibly intimate at the same time.

I had the same kind of audio revelation in Doom, too. Again, I couldn't say if these sounds simply weren't audible on other headsets or if I just skimmed over them, but there were definitely little details here that I felt like I was hearing for the first time, such as the high-pitched hydraulic zing of the UAC's pumps on the surface of Mars, or the deep, mechanical whirr of its drills and machinery. The important thing is that I was able to pick them out on the Logitech G Pro X, which simply hasn't been the case on other headsets I've tested. This sense of spatial awareness didn't stop there, either, as I was also able to pinpoint exactly where every enemy was located, and which direction their shots and plasma beams were coming from. Trust me, you've never heard demon bones get crunched and squelched with quite this level of exquisite detail.

Final Fantasy XV wasn't quite as jaw-dropping, all told, but still very lovely all the same. Its orchestral soundtrack was nice and warm, and it also felt well-balanced against all the other in-game sound effects such as Noctis and co's tromping boots and zippy-zappy sword magic. Nothing felt overpowered by anything else, and everything felt just as it should be. And to top it all off, it was equally great to use for regular music listening, too.

I literally couldn't ask for anything more.